A series of strong Pacific weather systems moved across the contiguous United States. The first system early in the week spread precipitation across Wyoming to the Upper Mississippi Valley, then left scattered showers over the Northeast before moving off into the Atlantic. The second brought precipitation to northern California and the Pacific Northwest. Its surface low weakened as it crossed the Rockies, but it was re-energized over the Plains and generated precipitation across the central Plains, Great Lakes, and Northeast.

The third system slammed into the West Coast near the end of the monitoring week. Fed by an atmospheric river of Pacific moisture, its surface low and front left heavy precipitation across California with widespread rain and some high elevation snow from California and the Pacific Northwest to the Great Basin. The end result of these weather systems was above-normal precipitation for the week across much of the West, including the Pacific Northwest, California, Nevada, and the central to northern Rocky Mountains; across eastern portions of the northern and central Plains, the southern Great Lakes, and western and southern portions of the Northeast; and a band of precipitation from southeast Kansas to eastern Kentucky. The precipitation improved short-term conditions, such as soil moisture and streamflow, especially in the West, but very dry long-term drought conditions continued, again especially in the West and northern Plains.

The rest of the contiguous U.S. was drier than normal for the week, with little to no precipitation falling across much of the Southwest, central and southern Plains, Lower Mississippi Valley to Southeast, northern reaches of the Upper Mississippi Valley, and northern Maine. Weekly temperatures were warmer than normal in the Pacific Northwest to northern and central Rockies, the southern Plains to Gulf of Mexico coast, and along the eastern seaboard.  Temperatures averaged cooler than normal in California and the northern Plains to Upper Mississippi Valley. Drought contracted or was reduced in intensity in parts of the West and Midwest, but expanded or intensified in the southern Plains, central High Plains, and Southeast.  Overall, expansion exceeded contraction, with the nationwide moderate to exceptional drought area increasing this week.

Abnormal dryness and drought are currently affecting more than 115million people across the United States including Puerto Rico—about 37.2% of the population. 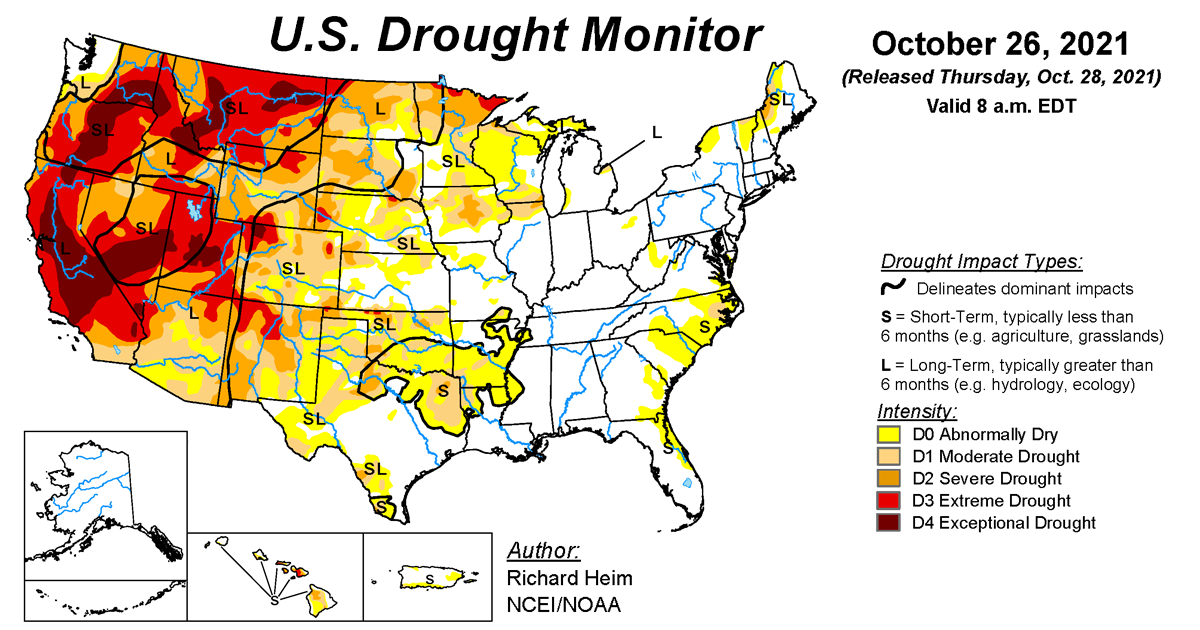