Upper-level circulation began with a strong high pressure ridge across the southern two-thirds of the contiguous United States, stretching from Bermuda in the Atlantic Ocean to the Southwest. The ridge brought warmer- and drier-than-normal weather to much of the country.  Hurricane Laura struck Louisiana early in the week then tracked across the Lower Mississippi Valley, Ohio Valley, and Mid-Atlantic regions, bringing cooler and wet weather along its path.  The main storm track kept to the north along the U.S.-Canadian border, until Laura weakened the ridge and enabled fronts and low-pressure systems to move across the Plains and Midwest.

The week ended with a Pacific weather system penetrating the ridge in the West, with its upper-level trough and surface fronts bringing cooler-than-normal weather to much of the West and Great Plains. Weekly temperatures averaged warmer than normal across most of the contiguous United States, with cooler-than-normal pockets in New England, the Pacific Northwest to northern Plains, and in Arkansas.

The precipitation pattern was dominated by the ridge and Laura. The week was wetter than normal along and near the Lower Mississippi and Ohio Valleys to the Mid-Atlantic coast (from Laura), and across much of the northern Plains to Northeast (from the northern storm track).  Drier-than-normal weather dominated most of the West, Southwest to southern Plains, central Plains to Ohio, and Georgia to the coastal Carolinas. Drought and abnormal dryness expanded or intensified where it continued dry, and contracted where it was wet. Expansion exceeded contraction, so the U.S. drought footprint grew again this week.

Abnormal dryness and drought are currently affecting over 112  million people across the United States including Puerto Rico—about 36.1% of the population. 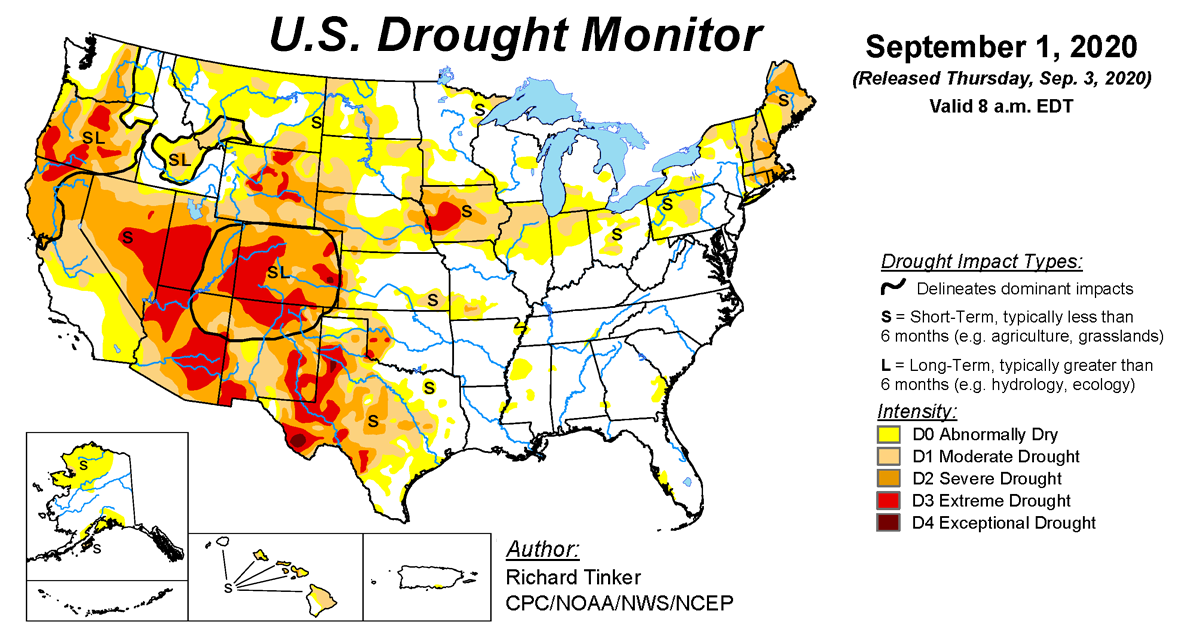 According to the October 17 U.S. Drought Monitor, moderate to extreme drought covers 12.5% of the contiguous U.S.

Understand our billion-dollar weather and climate disasters information, how it’s calculated, what it tells us, and why it’s so important.

According to the November 28 U.S. Drought Monitor, moderate to extreme drought covers 21.1% of the contiguous U.S.