The weather over the contiguous United States this U.S. Drought Monitor week reflected a battle between the subtropical high pressure belts and Tropical Storm Gordon, with some jet stream troughs thrown into the mix. The subtropical North Atlantic High dominated the weather over the eastern United States, keeping temperatures warmer than normal and precipitation lower than normal, at least at first. The subtropical North Pacific High edged into the western United States across California, while an upper-level low pressure system camped out north of it just off the coast of British Columbia.

The combination of the circulation associated with the North Pacific High and upper-level low induced an upper-level ridge over the western Lower 48, which kept the weather drier and warmer than normal from the Rockies and northern Plains westward to the Pacific coast. The jet stream sent ripples of Pacific energy, or upper-level troughs, across the U.S./Canadian border, and these systems dragged cold fronts across the northern tier states. One of the fronts penetrated deep into the central contiguous United States by Wednesday, bringing rain and cooler-than-normal temperatures to the region stretching from the central Plains to western Great Lakes.

Meanwhile, Tropical Storm Gordon moved westward across the Gulf of Mexico, guided by easterly winds along the southern side of the North Atlantic High. After Gordon made landfall along the Alabama-Mississippi-Louisiana coast, it merged with the front, which by now stretched from Texas to New England, and spread its tropical moisture across the western Gulf Coast, Lower Mississippi Valley, Ohio Valley, and into the Northeast.

The end result of all of this activity was a contraction of drought and abnormal dryness across much of the southern Plains and Lower Mississippi Valley and parts of the central Plains to Mid-Mississippi Valley, Ohio Valley, Great Lakes, and Northeast, as well as parts of the Southwest. Reassessment from Hurricane Lane’s rainfall resulted in drought contraction in Hawaii. Drought and abnormal dryness expanded or intensified a bit in parts of the West, northern Plains, and Deep South which were sidestepped by Gordon’s rains.

Abnormal dryness and drought are currently affecting over 104 million people across the United States—about 33.5% of the country’s population. 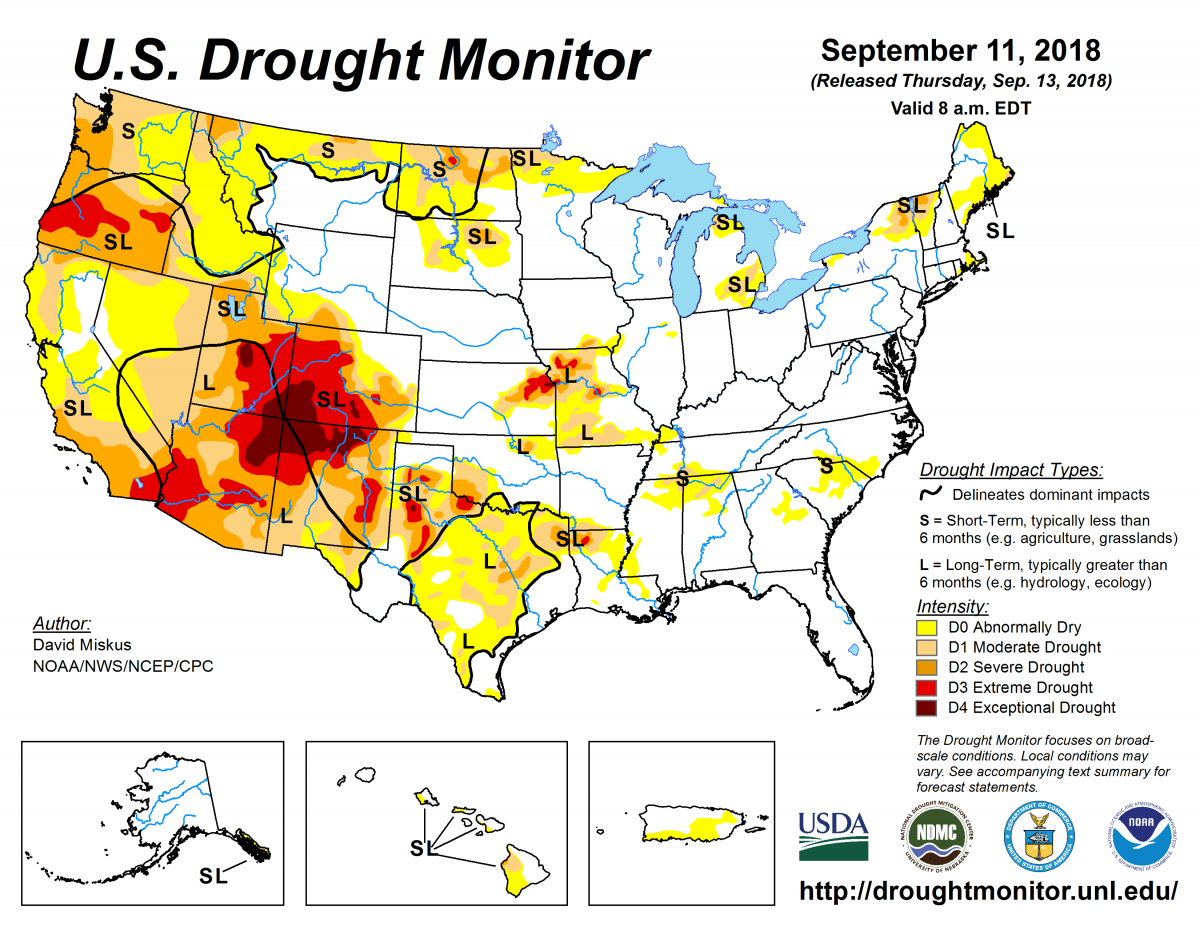 According to the April 14 U.S. Drought Monitor, moderate to exceptional drought covers 12.1% of the United States including Puerto Rico.

According to the November 21 U.S. Drought Monitor, moderate to extreme drought covers 15.4% of the contiguous U.S.