According to the September 22, 2020, U.S. Drought Monitor, moderate to extreme drought covers 33.5% of the United States including Puerto Rico, an increase from last week’s 32.8%. The worst drought categories (extreme to exceptional drought) increased  from 9.6% last week to 10.7% this week.

A strong high-pressure ridge in the upper-level circulation dominated the western contiguous United States and stretched into the Southeast with a downstream low-pressure trough over the Northeast. But the pattern was volatile, with weather systems moving through the upper-level flow along the Canadian border and tropical systems biting into the ridge in the south. The northern weather systems and eastern trough sent cold fronts plunging southward across the country east of the Rockies, with some fronts reaching as far south as the Gulf of Mexico. These fronts brought colder-than-normal temperatures to the eastern half of the contiguous United States. The western ridge kept temperatures warmer than normal across the western half of the contiguous United States. It also maintained a northwesterly flow across most of the contiguous United States that dried out air masses and left most of the country with much below-normal precipitation. In fact, very little to no precipitation fell from the Southwest to Northeast.

A Pacific weather system collided with the ridge over the Pacific Northwest, bringing much-needed precipitation to favored upslope areas in the Washington and Oregon coastal mountains and in the northern Rockies. At the other end of the country, Hurricane Sally drenched the Southeast early in the week and Tropical Storm Beta made landfall in Texas at the end of the week, bringing rain to western portions of the Gulf of Mexico coast. Drought and abnormal dryness expanded or intensified where it continued dry—in the West, most of the Plains, and parts of the Midwest to Northeast.

Rain from the tropical systems contracted drought and abnormal dryness in the southern Plains and Southeast. Continued dryness in Hawaii expanded drought across the state. Expansion far outpaced contraction, with the overall U.S. drought footprint growing this week.

Abnormal dryness and drought are currently affecting over 113million people across the United States including Puerto Rico—about 36.4% of the population. 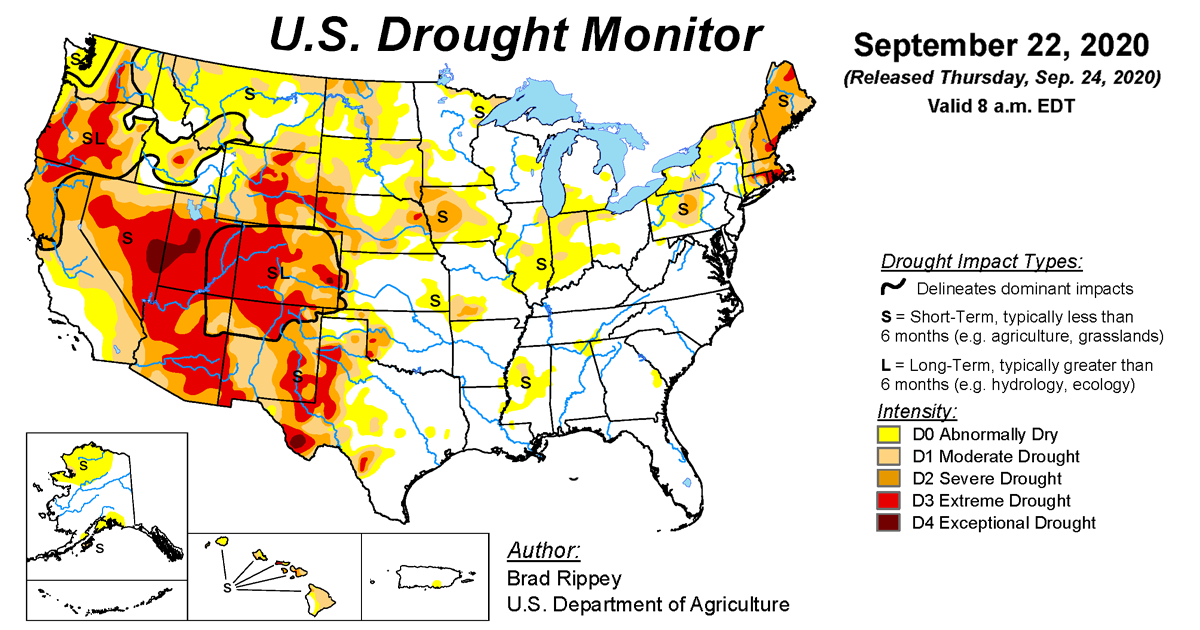