The upper-level circulation during the week consisted of a strong subtropical high pressure ridge across the West, stretching into the Southeast, with the main storm track deflected into western Canada then into the Great Lakes. As the weather systems moved into the Great Lakes, their cold fronts swept across the country east of the Rockies, bringing showers and thunderstorms to some areas. Above-normal precipitation fell along the fronts across the southern Great Lakes and from Texas to the central Appalachians.

As the week ended, a strong low pressure system plunged southward along the Rockies, dropping above-normal precipitation, with some snow, across the northern High Plains and Rockies and cutting the high pressure ridge in half. The fronts brought cooler-than-average temperatures for the week to the northern Plains and Upper Midwest, but the ridge kept temperatures warmer than normal along the East Coast and much warmer than normal across the West.

Due to the subtropical ridge, the week was drier than normal where the frontal rains did not occur, especially across the West, Southeast, central Plains, Upper Mississippi Valley, and New England. The continued heat, dryness, and strong Santa Ana winds contributed to dozens of devastating large wildfires across the West. Drought and abnormal dryness expanded or intensified where it continued dry, but some of the frontal rains fell across drought areas, contracting drought and abnormal dryness. Extreme to exceptional drought expanded, especially in the West, but the overall U.S. drought footprint shrank this week, thanks to contraction of moderate and severe drought in Texas and the Midwest.

Abnormal dryness and drought are currently affecting over 106million people across the United States including Puerto Rico—about 34.3% of the population. 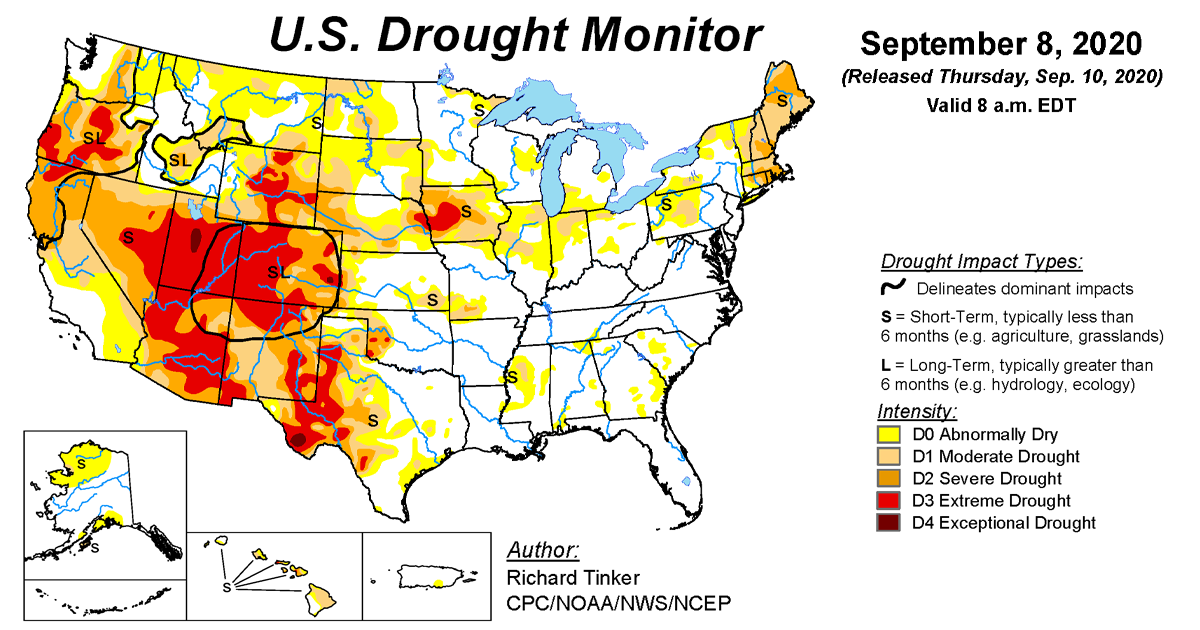 According to the November 17 U.S. Drought Monitor, moderate to exceptional drought covers 39.0% of the United States including Puerto Rico.