Courtesy of NWS-Green Bay and The Associated Press

Fifty years ago, two teams battled more than each other for sports glory. The Ice Bowl, as it came to be known after the 1967 NFL Championship game on a frigid New Year’s Eve, outdid the hype of most professional football league contests by going down in history among the greatest games played in extreme weather.

Well-below zero temperatures and bitter wind chills packed a sudden, unexpected punch that Sunday due to an Arctic front that swept across Wisconsin, where the Green Bay Packers and the Dallas Cowboys poised to play at Wisconsin’s Lambeau Field. The night before the rivalry, the temperature dropped nearly 30 degrees. By 9 AM CST on gameday, the temperature was −16°F with wind chills of −38°F, based on the revised Wind Chill Temperature Index of the National Weather Service (NWS). After kickoff at 1 PM CST, temperatures ranged from -12°F to -14°F with wind chills between −33°F and −37°F, making it the coldest game in the history of the football league. 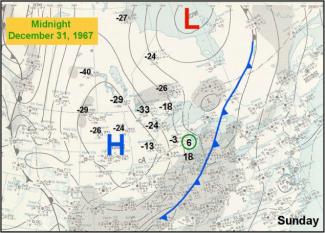 “The weather the day before the Ice Bowl was relatively tranquil with a high of 20°F,” writes the Green Bay NWS Office in a 50th anniversary commemoration of the extraordinary event. “Temperatures were so cold, in fact, that referees had to shout signals so that the metal whistles wouldn't stick to their lips.”

Although December 31, 1967, does not set the Wisconsin state record for lowest minimum temperature, recorded twice in 1996 at −55°F, the conditions for the game caused frostbite and other injuries among players and fans, including one weather-related death among the more than 50,000 spectators braving conditions.

The extreme weather conditions added to the drama of the rivalry that pitted two soon-to-be legendary coaches, Tom Landry of Dallas and Vince Lombardi of Green Bay, in a second high-stakes matchoff. A year prior, the Packers and Cowboys had played in the same game, won by Green Bay, 34–27.

This time, according to media reports and the Pro Football Hall of Fame, the field was like a “sheet of ice.” Though conditions made running difficult, Packers quarterback Bart Starr dove for the winning touchdown. In the last several seconds of the game, Starr brought his team back from a 3-point deficit and clinched the win, 21–17.

On This Day: Remembering the Yarnell Hill Wildfire

On June 28, 2013, a rogue lightning strike set in motion a series of events near Yarnell, Arizona, that would ultimately end in

Over a decade ago, the sun played a rather spooky Halloween trick on the planet when it unleashed a series of massive solar

The South Sandwich Islands are a group of extremely remote, very small, uninhabited islands located just north of Antarctica in