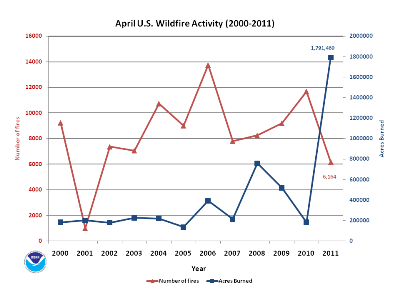 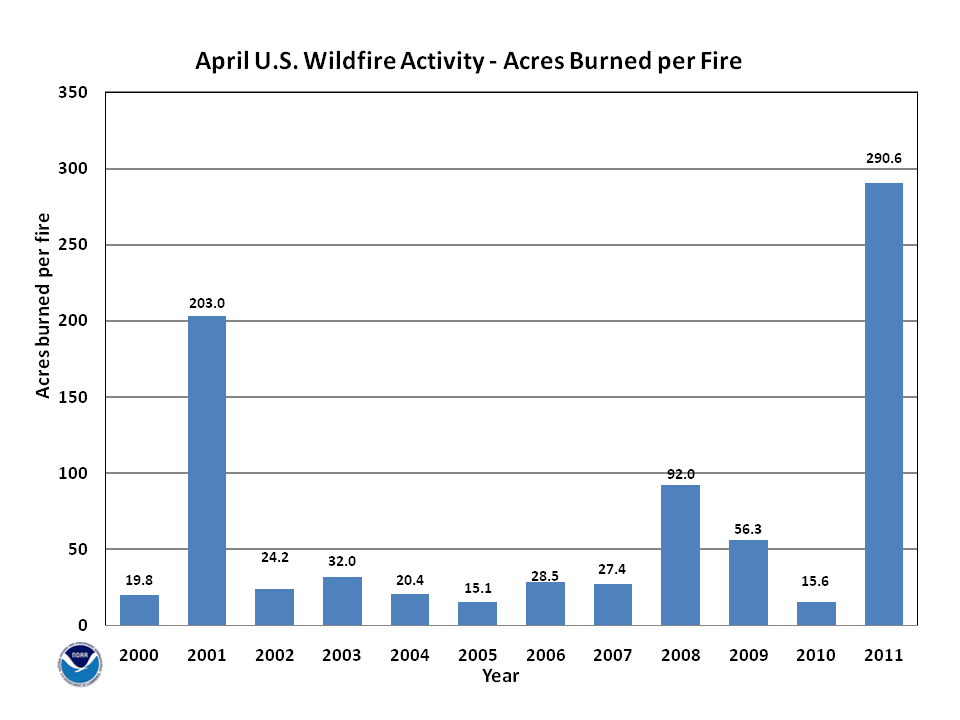 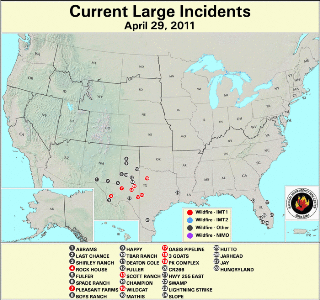 Much-above-average fire activity has plagued the southern tier of the U.S. since February. April provided little reprieve with thousands of large wildfires burning across the country. Hardest hit was the southern Plains, including parts of Oklahoma, Texas, and New Mexico, where several large fires burned millions of acres and destroyed thousands of structures. The region experienced above-normal temperatures and below-normal precipitation on the one-month, three-month, four-month and six-month time scales, drying out much of the vegetation and creating ample fuel for wildfires. Many of the climate divisions across the region had record-low precipitation for the same time scales. Please see the monthly temperature and precipitation discussion for more information. Meanwhile the rest of the country experienced near- to above-normal precipitation, limiting wildfire growth. During April, there were 6,164 new wildfires across the country, which burned 1.79 million acres (0.7 million hectares), marking the most active April in terms of acreage burned in the 12-year period of record. At the beginning of April, there were 32 large wildfires burning across the country: seven in Oklahoma and Missouri; six in Texas; four in New Mexico; two in Colorado, Kansas, and Georgia; and one each in Arkansas and South Carolina. By mid-month, much of the wildfire activity shifted towards the Southern Plains, with 34 total large fires burning nationwide — 17 in Texas; four in Oklahoma and New Mexico; three in Arkansas; two in Mississippi; and one each in Georgia, Louisiana, Kansas, and Colorado. On the 29th, wildfire activity expanded into southern Florida and persisted across much of Texas where drought conditions prevailed. There were 28 large wildfires active across the country, 19 in Texas, seven in Florida, and two in New Mexico. 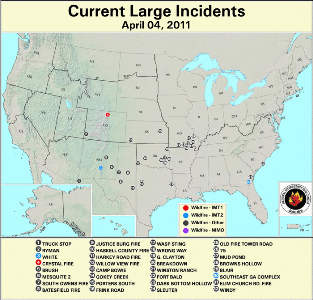 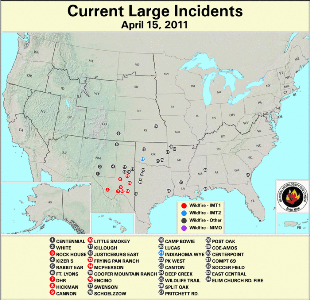 According to statistics from the National Interagency Fire Center (NIFC), at the end of April, the nationwide number of fires year-to-date was 23,232 which burned approximately 2.4 million acres (1 million hectares), with an average of 101 acres (41 hectares) per fire. This marks the sixth largest (seventh smallest) number of fires for the year-to-date period and the largest acreage burned since records began in 2000. The relatively small number of fires compared to the acreage burned was associated with the large average fire size. During April, an estimated 1.79 million acres (0.7 million hectares) burned across the U.S., which was 6.1 times the 2000-2010 average. A total of 6,614 fires were reported during the month, which was below the 2000-2010 average of 8,645. The average number of acres burned per fire was 290.6 acres (117.6 hectares), which was the largest in the period of record and six times the 2000-2010 average of 48.6 acres (19.7 hectares). 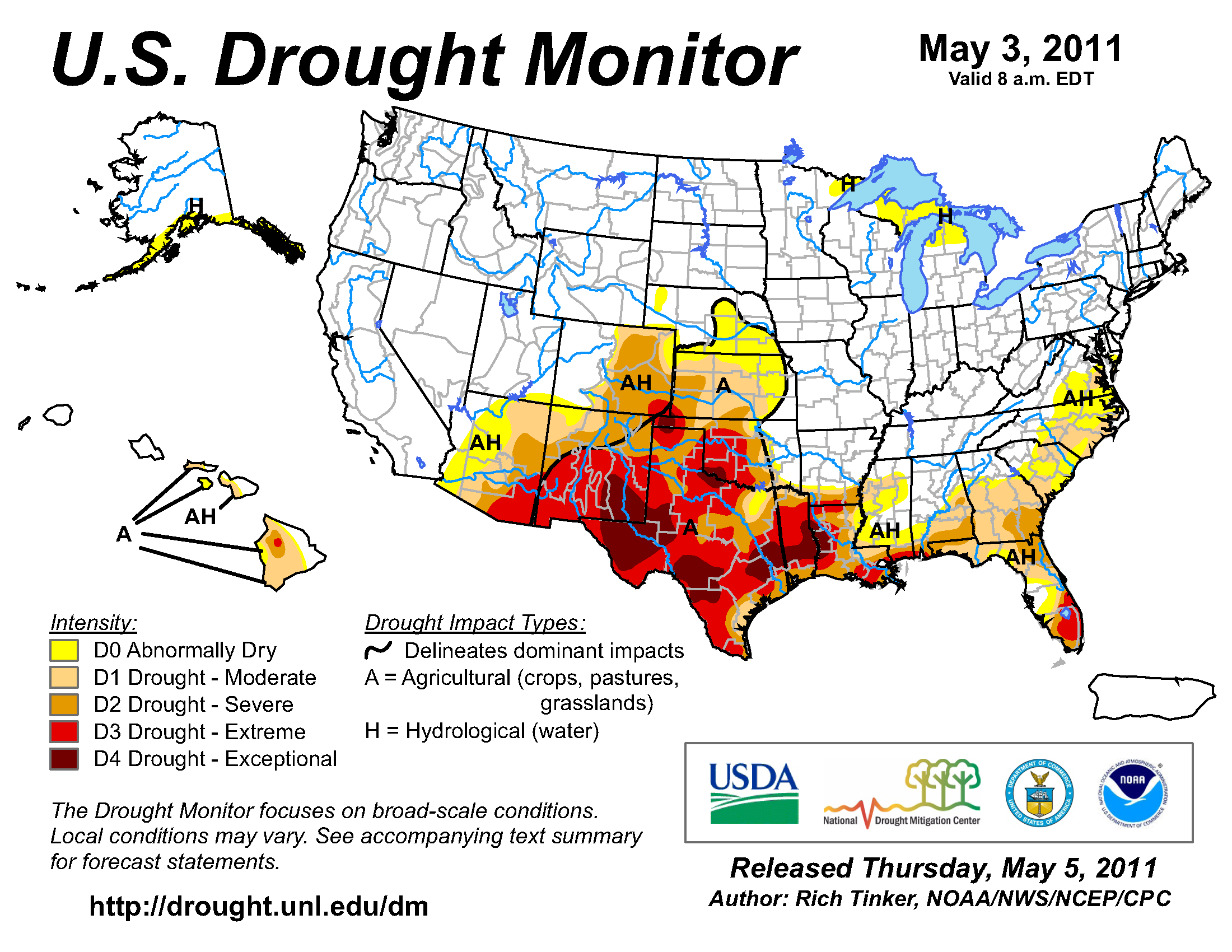 According to the U.S. Drought Monitor, during the month of April, the overall size of the drought footprint across the contiguous U.S. shrank, but the percent area experiencing extreme and exceptional drought expanded. Drought conditions generally improved across the southeastern U.S. by one to two categories. The severe drought across the Carolina piedmont was re-classified as moderate, and the extreme drought along the coast of Georgia and northern Florida was reclassified as severe. The severe-to-moderate drought persisted across southern Florida. The ongoing drought across the southern Plains intensified, particularly in Texas, Louisiana, Oklahoma, and New Mexico. At the beginning of May, 73.7 percent of Texas was experiencing extreme-to-exceptional drought, exacerbating the wildfire conditions across the state. Drought conditions remained generally unchanged across the rest of the country. Wet conditions across the central and northern plains kept drought from developing, and across the west above average snowpack helped keep streams and rivers flowing at or above normal levels. In Hawaii, drought remained generally unchanged, except along the eastern coast of the Big Island where drought was completely alleviated. Abnormally dry conditions persisted across the southern coast of Alaska throughout April. 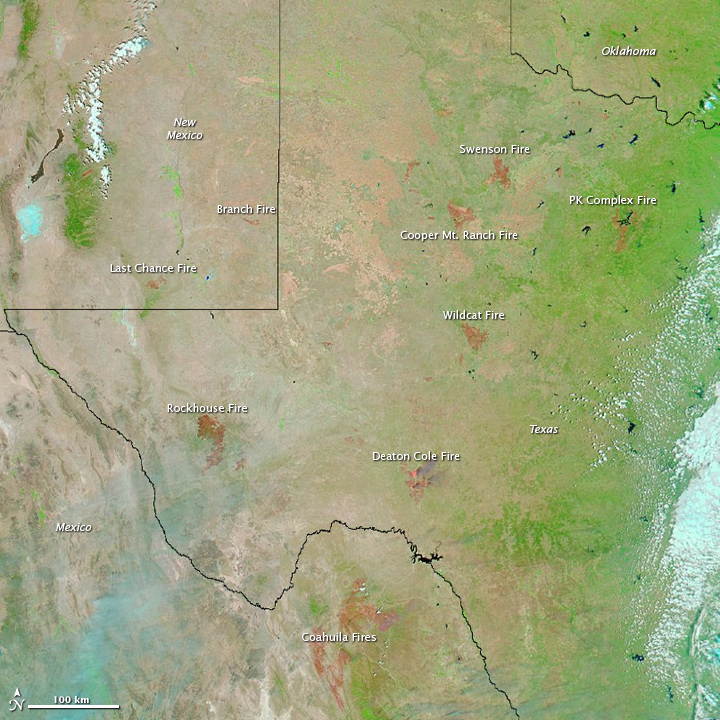 Wildfire activity that began in February across the southern Plains continued through March into April. During April, extremely dry and windy weather conditions prevailed across western Texas and New Mexico, creating ideal conditions for wildfires. April 2011 followed the driest March on record for Texas and the third driest for New Mexico. Thousands of fires grew rapidly out of control across the two states, burning millions of acres. Several cities in Texas, including Austin and San Antonio had top five driest/warmest Aprils on record. Much of the fuel for the fires came from dried underbrush and grasses which experienced ideal growing conditions during the summer of 2010, when there was abundant precipitation observed across the region. This spring has proven to be the opposite, drying out much of last year's vegetative growth. During the year-to-date period alone, wildfires have burned approximately 2.2 million acres (0.9 million hectares) across Texas, including over 400,000 acres (161,875 hectares) that burned in towns that were handled by local fire departments. These additional 400,000 acres (161,875 hectares) are not typically reported to NIFC. Many of the wildfires were ignited by natural phenomenon, such as lightening, but several fires were by started humans, both intentionally and non-intentionally. The fire conditions were driven by a series of strong upper level low pressure systems moving from the Rockies into the central Plains, bringing strong winds to the region. The associated dry line, a boundary between the dry continental air and moisture from the Gulf of Mexico, consistently set up across Texas, blocking any moisture from reaching the western parts of the state and New Mexico.

Several metropolitan areas of Texas were threatened by the wildfires during the month, including San Angelo, Austin, and Fort Worth. For the year-to-date period, 1,134 structures, including 244 homes, have been destroyed by fires across Texas. In a southwest suburb of Austin, 10 homes suffered major damage. In San Angelo, the Wildcat fire forced the evacuation of hundreds of people due to fears of the fires overtaking entire neighborhoods. Several of the individual fires exceeded 100,000 acres (40,468 hectares) in size. The Rock House fire, which burned near Fort Davis, Texas burned nearly 315,000 acres (127,475 hectares) of land and destroyed 41 homes and two businesses. The Rock House Fire was the largest observed in Texas for the year. Governor Rick Perry declared a state of emergency for several counties, and asked for federal funds to help the firefighting efforts, which were estimated at two million dollars a day. The state used a variety of available resources to battle the blazes including over 2,000 volunteer firefighters and 71 aircraft. Officials with the Texas Forest Service claim this was the worst wildfire season on record for the state, and at least two firefighters perished as they tried to battle the blazes. 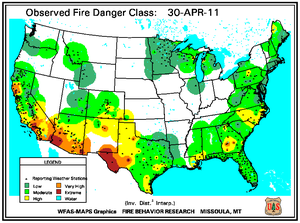 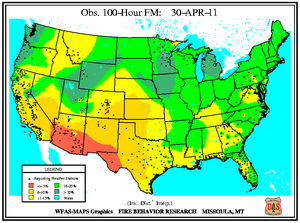 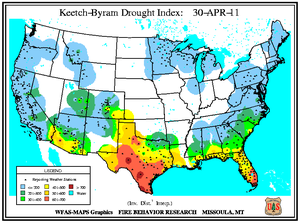 NOAA National Centers for Environmental Information, State of the Climate: Monthly Wildfires Report for April 2011, published online May 2011, retrieved on August 8, 2022 from https://www.ncei.noaa.gov/access/monitoring/monthly-report/fire/201104.