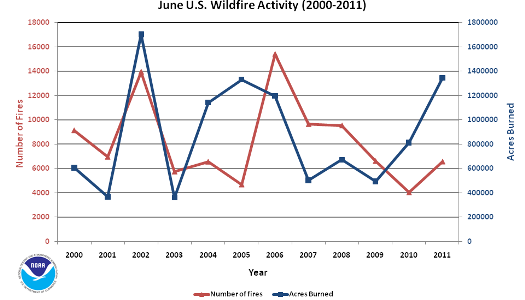 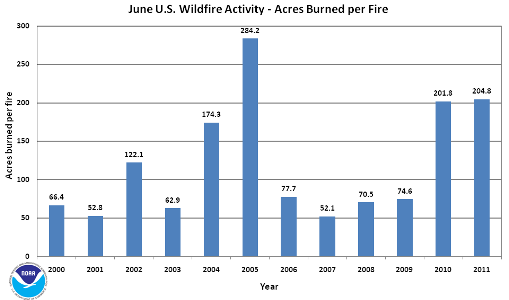 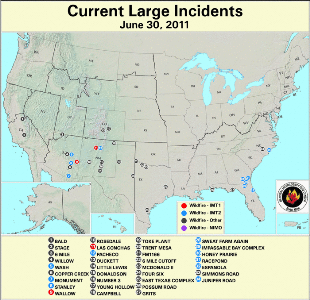 The above-average wildfire season across the southern tier of the country continued into June 2011. Very warm, dry, and windy conditions persisted across the Southern Plains and Southwest, creating ideal wildfire conditions. Several locations across the region broke long-standing temperature and precipitation records during the month. New Mexico had its driest June on record, while Arizona, Oklahoma, and Texas all had a top-five driest June. Texas had its warmest June on record, and most of the South also experienced much above average June temperatures. Please see the U.S. State of the Climate temperature and precipitation discussion and U.S. Records page for additional information.

During June, there were 6,567 fires which burned 1.3 million acres (526,000 hectares). This is the second most acres burned during the month of June on record. During June 2002, 1.7 million acres (688,000 hectares) burned across the country. The high acreage burned during this month is partially due to the large fires across Arizona and New Mexico, where fires in those states broke statewide records for acreage burned. At the beginning of June there were 27 large wildfires burning across the U.S. — seven in Alaska, five in Florida, three each in Arizona, Texas, and Mississippi, two in both Georgia and New Mexico, and one each in North Carolina and Colorado. By the middle of the month, 39 large wildfires were burning across the country — 14 in Florida, nine in Texas, five in Arizona, four in Georgia and New Mexico, and one each across Colorado, North Carolina, and Alaska. At the end of the month, 36 large fires were burning nationwide, eight in both Arizona and Texas, seven in New Mexico, four Georgia, two in each California, North Carolina, and Texas, and one each in Alabama, Colorado, and Oklahoma. 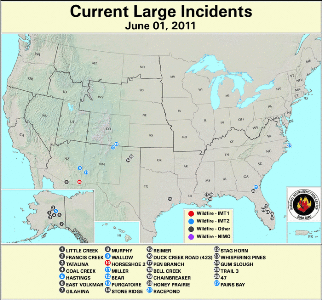 According to statistics from the National Interagency Fire Center (NIFC), at the beginning of July, the nationwide number of fires year-to-date was 36,424 which burned approximately 4.8 million acres (1.9 million hectares), with an average of 132 acres (53.4 hectares) per fire. This marks the largest acreage burned for the January-June period since records began in 2000, suprassing the January-June 2006 period by more than 1.0 million acres (405,000 hectares). Conversely, the number of fires year-to-date was below average, marking the fourth smallest (ninth largest) on record. The relatively small number of fires compared to the acreage burned was associated with the large average fire size. During June, an estimated 1.35 million acres (0.55 million hectares) burned across the U.S., approximately 500,000 acres (202,342 hectares) above the 2000-2010 average. A total of 6,567 fires were reported during the month, which was below the 2000-2010 average of 8,387. The average number of acres burned per fire was 204.8 acres (82.9 hectares), which was the largest in the period of record and nearly twice the 2000-2010 average of 112.7 acres (45.6 hectares). 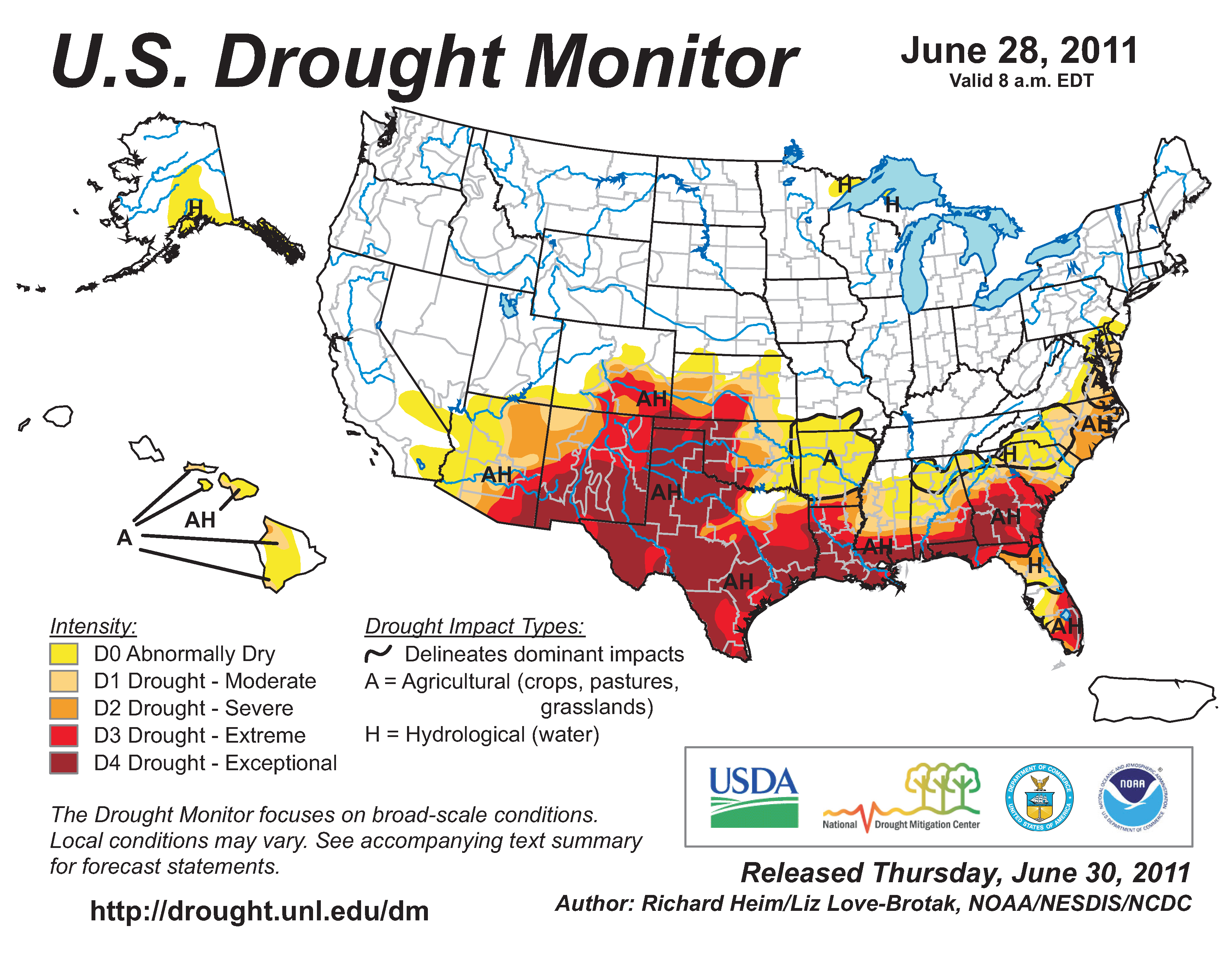 According to the U.S. Drought Monitor (USDM), during the month of June, dry conditions prevailed across the southern tier of the country, particularly the Southwest, Southern Plains, and along the Gulf Coast and the Mid-Atlantic coast. According to the USDM, the overall percent area of the contiguous U.S. experiencing drought (D1-D4) increased from 25.6 percent to 28.1 percent. The extent of each category of drought also increased. Most noteworthy, by the end of June, 11.9 percent of the country was experiencing exceptional drought, the most extreme drought category. During the month, no region of the contiguous U.S. experienced improvement in drought conditions. Across the Southwest, drought conditions worsened with extreme-to-exceptional drought spreading across southern Arizona and most of New Mexico. By the end of June, 47.3 percent of Texas was under exceptional drought conditions, which also stretched across western Oklahoma, and along the Gulf Coast into southern Georgia, and coastal Florida. On the 28th of June, 63.5 percent of Louisiana and 41.2 percent of Georgia were classified as in exceptional drought. Drought conditions also worsened across the coastal Mid-Atlantic, which has been dry for the past few months. During the month, the drought footprint across Hawaii remained unchanged, while the central and southern coastal regions of Alaska continued to experience abnormally dry conditions. 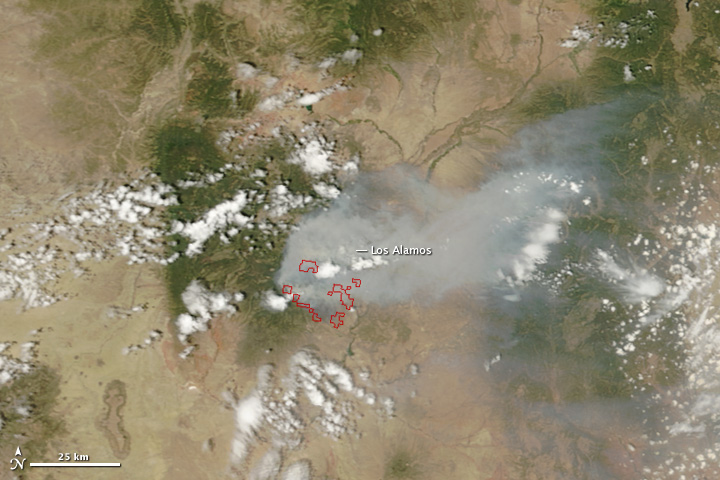 The Las Conchas Fire was ignited on June 26th in northern New Mexico near Los Alamos. On July 1st, the fire had consumed over 94,000 acres (38,040 hectares) and was only three percent contained. Given the forecasted weather conditions, the fire was expected to burn well into July. The fire surpassed the 94,000 acres burned by the 2003 Dry Lakes Fire as New Mexico’s largest fire on record. The fire was driven by strong winds and extremely dry fuels. The largest concern of the firefighters was the town of Los Alamos, home to the country’s premier nuclear research facility. The fire encroached upon the grounds of the research facility several times, but fire crews were able to keep the flames from spreading. The lab, as well as the Bandelier National Monument, was closed and several cities nearby including Los Alamos, Cochiti Mesa, and Las Conchas were evacuated as a precaution. According to media reports, on the 28th, the blaze was said to be as close as 50 ft (15 m) away from the grounds of the lab, raising fears it could reach a cache of 30,000 drums, each containing 55 gallons (208 litres) of plutonium-contaminated waste. This prompted the Environmental Protection Agency to deploy air monitors and aircraft to monitor radiation levels. Over 1,200 crews from around the country were called in to battle the blaze. 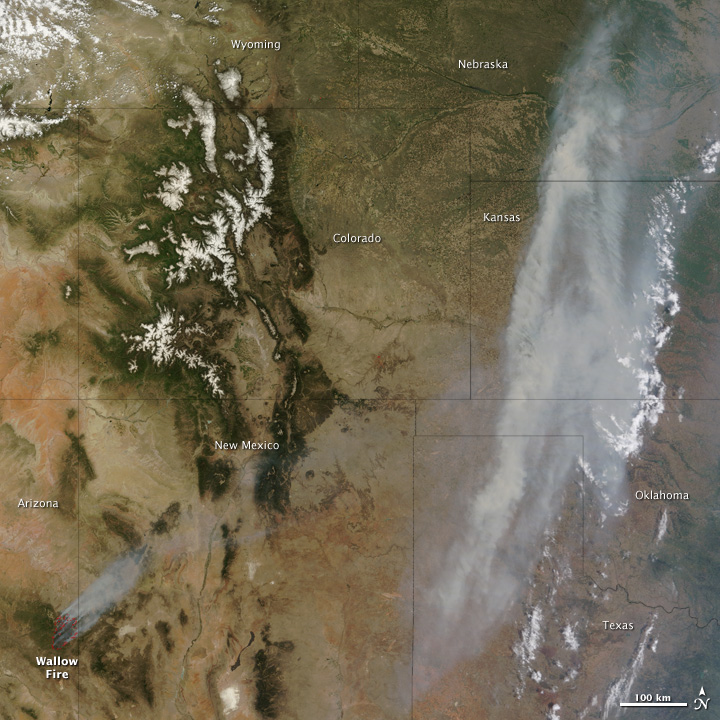 Two large wildfires ravaged parts of eastern Arizona during the month of June — the Wallow and Horseshoe 2 fires. Both wildfires were fueled by extremely dry conditions and strong winds and were ignited due to human activity. The Wallow fire, which was first reported on May 29th, burned 538,049 acres (217,740 hectares) by June 30th, and nearly 1,000 firefighting crews were called in to battle the blaze. The Wallow fire was the largest fire ever reported in the state of Arizona, surpassing the Rodeo-Chediski Fire by nearly 70,000 acres (28,328 hectares), which occurred in July 2002. By the end of June, the Wallow Fire had destroyed 32 homes and 40 additional structures, compared to the 900 structures destroyed by the Rodeo-Chediski Fire. The fire threatened several communities in eastern Arizona, forcing the evacuation of Sunrise, Greer, Blue River, Alpine, Nutrioso, Eager, and Springerville. The fire had far reaching impacts beyond Arizona, with the strong winds blowing the smoke as far away as the Great Lakes, creating poor air quality conditions from Arizona to Wisconsin. On June 30th, the fire was 95 percent contained. 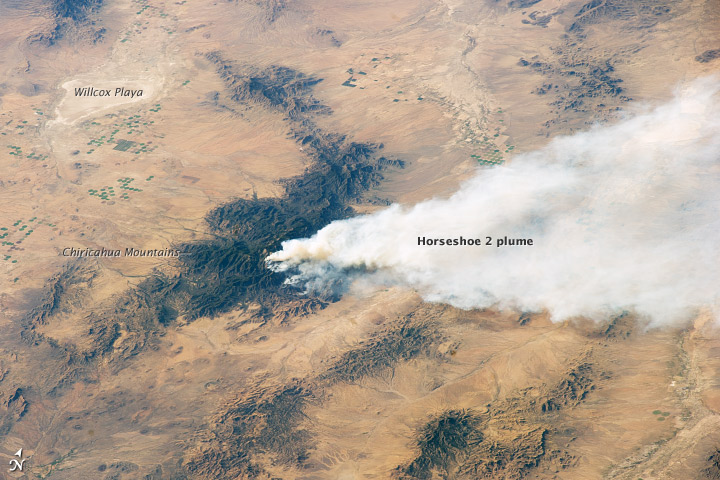 Almost due south of the Wallow Fire, the Horseshoe 2 fire burned across southeastern Arizona. The fire began in Horseshoe Canyon on the Douglas Ranger District of the Coronado National Forest on May 8th. On June 29th, the fire was 100 percent contained after burning 222,954 acres (90,226 hectares). Several communities had to be evacuated including Cave Creek Canyon, Paradise, Whitetail Canyon, West Turkey Creek and West Pinery Canyon, where nine residences were destroyed. The Chiricahua National Monument was closed in early June and continued to be closed due to smoldering that was still occurring on June 30th. The fire grew rapidly out of control during May and June due to unprecedented dry fuel moistures, an abundance of fuel caused by a frost kill of oak this past winter, and strong erratic winds. 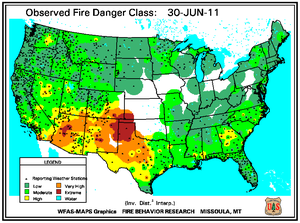 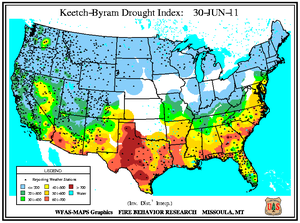 According to the USFS – Wildland Fire Assessment System, at the beginning of the month, high Keetch–Byram Drought Index (KBDI) values were occurring across the regions experiencing the most extreme drought — most of Texas, along the Gulf Coast, and along the southeastern U.S. coast. By the middle of the month, high KBDI values expanded across southern Arizona and New Mexico and persisted across most of Texas. KBDI values increased across the Gulf Coast and Southeast and stretched into the Tennessee Valley and the coastal Mid-Atlantic. On June 30th, the high KBDI values across the southern tier of the country persisted, and stretched further northward into the coastal Northeast. Precipitation across southern Texas and Florida lowered KBDI values there.

NOAA National Centers for Environmental Information, State of the Climate: Monthly Wildfires Report for June 2011, published online July 2011, retrieved on May 16, 2022 from https://www.ncei.noaa.gov/access/monitoring/monthly-report/fire/201106.