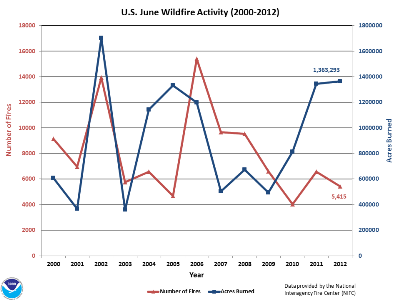 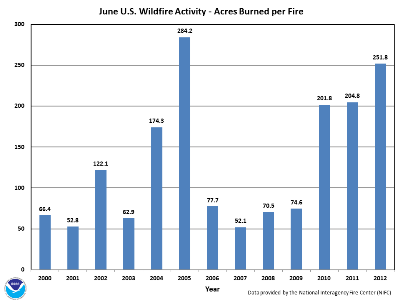 During June, several wildfires burned across the western U.S. which threatened population centers and destroyed hundreds of homes. The 1.36 million acres that burned nationwide during June was the second most on record for the month, while the 5,415 fires was the third least on record for June. 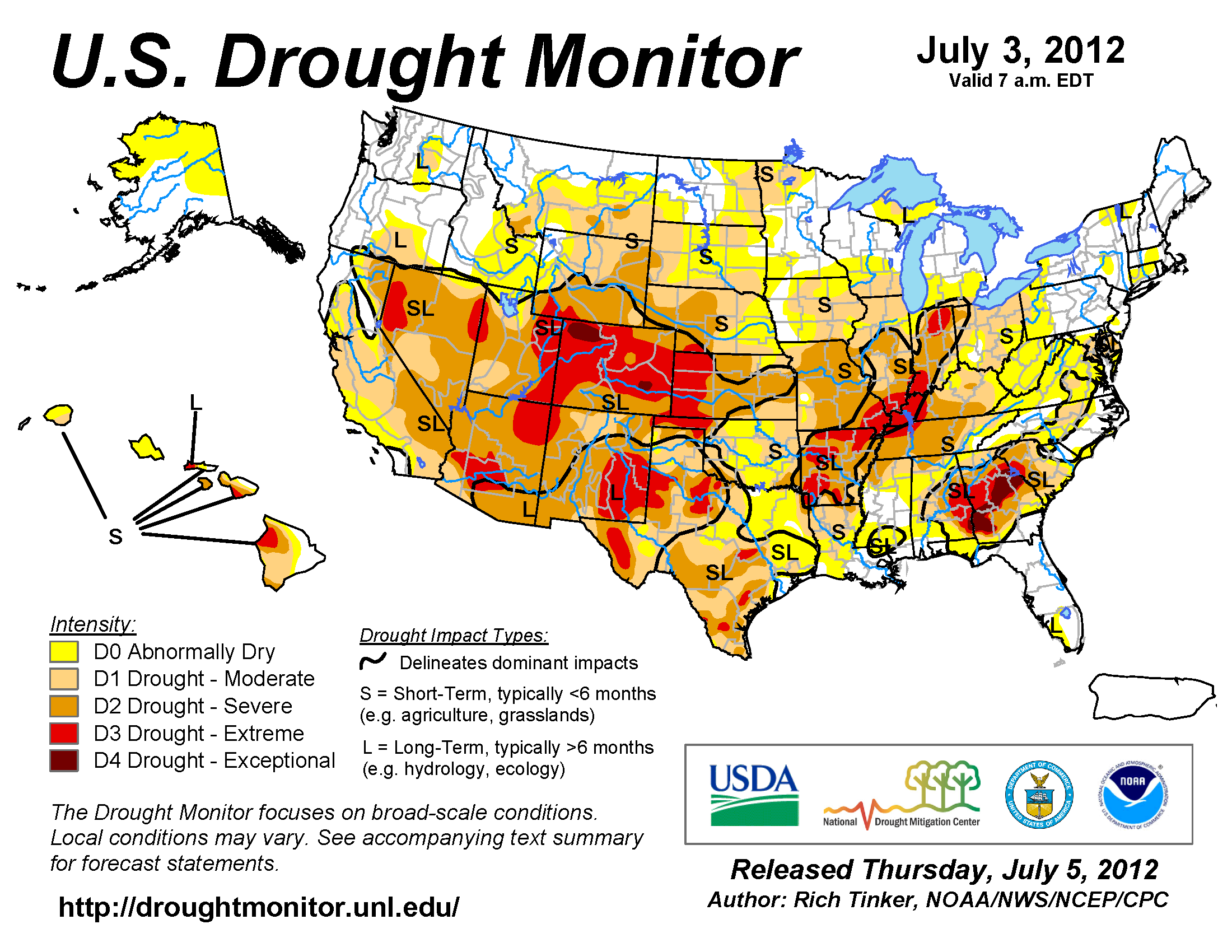 As a whole, the contiguous U.S. had its 14th warmest and 10th driest June on record. Warm conditions were anchored across the Intermountain West and High Plains. Dry conditions were widespread from the Great Basin, across the Central Plains, and into the Ohio Valley. On a statewide level, Colorado had its warmest June on record, while Wyoming was record dry. Please see the U.S. temperature and precipitation report for additional information. The warm and dry conditions across the Rockies, combined with strong winds, created ideal wildfire conditions during the month. According to the U.S. Drought Monitor, the percent area of the contiguous U.S. experiencing Moderate-to-Exceptional (D1-D4) drought grew from 37.4 percent at the end of May to 56.0 percent at the beginning of July. Drought improved drastically across Florida, where Tropical Storm Debby dropped copious amounts of rainfall. Drought conditions worsened across the Ohio Valley, Mid-South, and Great Plains where Severe and Extreme (D2-D3) drought conditions developed. Drought also worsened throughout the Intermountain West, with Extreme and Exceptional (D3-D4) drought covering nearly 71 percent of Colorado at the beginning of July.


Please note, this is a list of select fires that occurred during June. Additional fire information can be found through Inciweb. 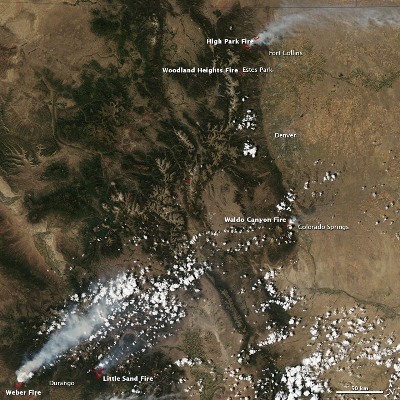 Several large wildfires raged across Colorado during June causing significant damage and charring over 165,000 acres along the highly populated Front Range, destroying over 700 homes. The Waldo Canyon Fire was ignited on June 23rd by unknown causes, just west of Colorado Springs. On the 26th, very warm, dry, and windy conditions caused the fire to explode eastward, engulfing parts of Colorado Springs, prompting the evacuation of over 32,000 people, including the U.S. Air Force Academy. By the end of June, the fire had burned nearly 18,000 acres and had destroyed 346 homes, marking the most destructive wildfire in Colorado history. The High Park Fire was ignited on June 9th by a lightning strike west of Fort Collins. The fire was fully contained by the end of June, after charring approximately 87,000 acres, marking the second largest fire in Colorado history. In total, 259 homes were lost due to the High Park Fire.

During June, over 214,000 acres burned across the state of Montana destroying at least 275 homes. The largest fire during the month was the Ash Creek Complex. The fire was ignited by lightning on June 25th east of Billings, and quickly grew out of control due to dry and windy conditions. By the end of June, the fire was only 40 percent contained and had charred 170,000 acres. The Dahl Fire, started on June 26th by a lightning strike, burned over 22,000 acres by the end of June near the town of Roundup.

In Utah, approximately 190,000 acres burned due to wildfires in June. The largest wildfire was the Clay Springs Fire, which destroyed nearly 100,000 acres between June 27th and the end of the month. On July 2nd, the fire was only 40 percent contained, with warm, dry, and windy conditions expected to continue. There were 75 structures threatened by the fire. The Wood Hollow Fire, south of Provo, was started by unknown causes on June 24th and burned over 47,000 acres by the end of June, when it was fully contained. The fire destroyed 52 homes and 100 other structures, with another 300 residences threatened. One civilian fatality was confirmed due to this fire. 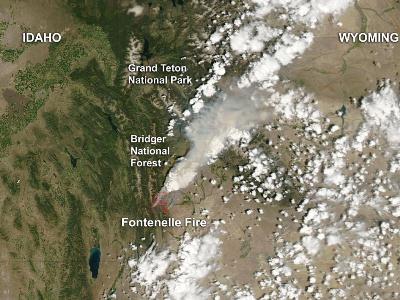 Nearly 130,000 acres burned in Wyoming during June. The Arapaho Fire burned 75,000 acres west of Wheatland, between June 27th and the end of the month. Numerous structures were destroyed in the fire, but conditions were too dangerous at the beginning of July for authorities to provide an accurate assessment of the total damage. On July 1st, the fire was only five percent contained. The Fontenelle Fire was ignited on June 24th, by unknown causes, and destroyed nearly 48,000 acres in Sublette and Lincoln Counties. The largest impact of this fire was on the oil/gas production activities in the region. 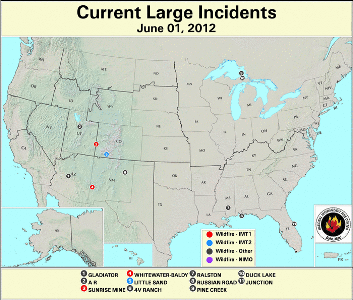 On June 1st, there were eleven large wildfires burning across the nation. Six fires were burning in the Southwest, in the states of New Mexico, Colorado, Utah, and Arizona, where high fire danger and dry fuels of all sizes (low 10-hour, 100-hour, and 1,000-hour fuel moistures) were observed. The Two Pine Creek and Duck Lake fires continued to burn in the Upper Peninsula of Michigan which was experiencing low 10-hour fuel moistures. Three large fires were burning across the Southeast, where dry conditions contributed to high KBDI values. 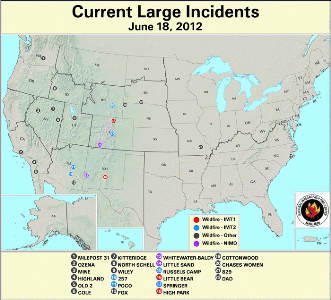 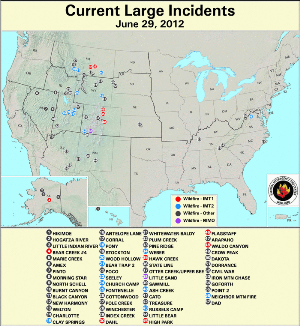 By the end of June, wildfire activity exploded across much of the country, with 57 large wildfires burning. Six large fires were burning across the Virginias, North Carolina, and Tennessee, where dry conditions contributed to low 100-hour fuel moistures. Forty five large fires were active in the Intermountain West, from Arizona to Montana. Across the region, dry conditions for several months were exacerbated by record breaking hot temperatures and windy conditions the second half of June, creating ideal conditions for wildfires. Very high fire danger and KBDI values were widespread across the West, as well as low 100-hour and 1,000-hour fuel moistures. Four fires were active in central Alaska, where abnormally dry conditions developed during June. One large wildfire was active in Hawaii, where dry conditions were observed during much of June. One additional large fire was active in Kansas.