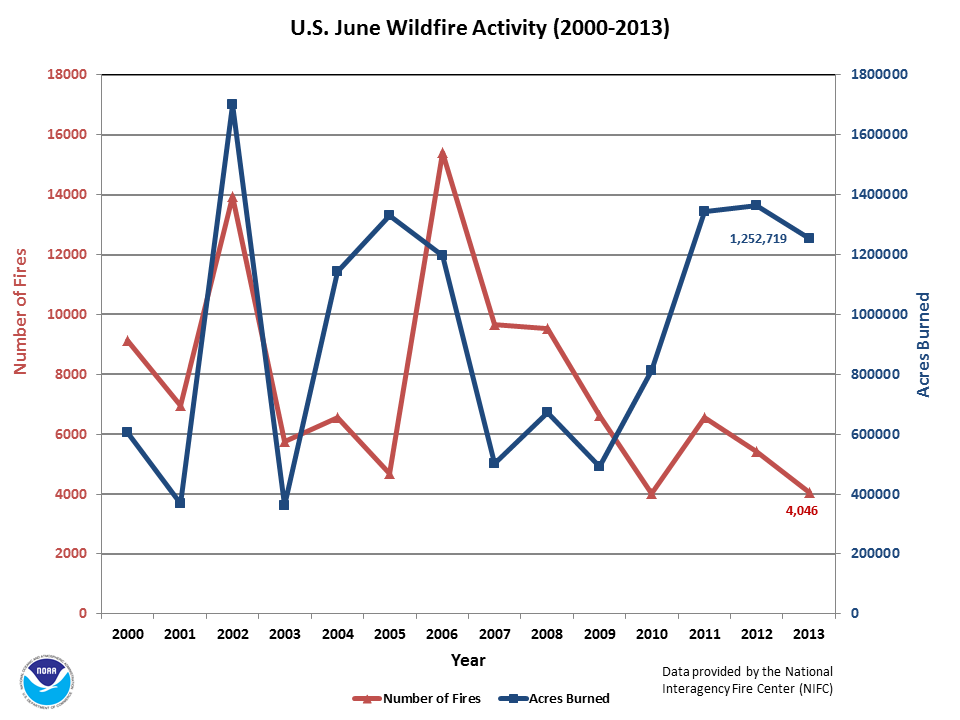 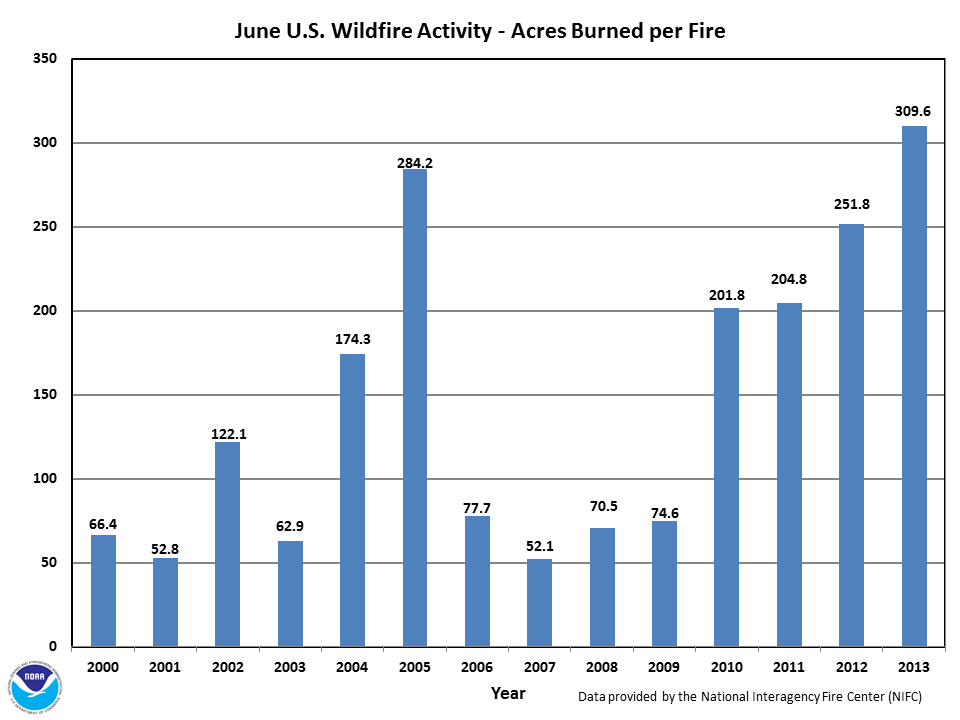 During June, wildfire activity rapidly increased compared to the January-May period. An estimated 4,046 fires burned over 1.25 million acres. This was the fifth most June acreage burned in the 14-year period of record. The small number of fires and large acreage burned led to an average fire size of 309.6 acres per fire, the largest on record for June. A majority of the wildfire activity in June was confined to the western contiguous U.S. and Alaska. Several of the fires were large and very destructive, resulting in loss of life and property, as well as prompting thousands of evacuations. Despite the above-average fire activity during June, the year-to-date number of fires and acreage burned are much below average. During the January-June period, 22,050 fires charred over 1.5 million acres, the least amount of fires on record for the 6-month period and the fourth least acreage burned. 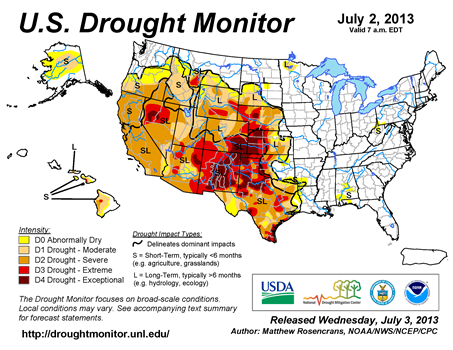 Weather conditions during June were favorable for wildfire activity across the western United States. Many of the southwestern and Rocky Mountain states were much warmer and drier than average. Alaska was also much warmer than average, having its third warmest June on record. The warm and dry conditions, combined with frequent high winds, resulted in ideal wildfire conditions during much of the month in the Southwest. Wildfire activity was limited in the eastern U.S., where an abundance of rain dampened fuels and suppressed wildfires.

Wildfires in Alaska burned over 800,000 acres during June. Very warm temperatures created ideal wildfire conditions during the second half of the month. The Stuart Creek 2 Fire burned approximately 64,570 acres east of Fairbanks. The fire was ignited on June 19th, and by July 8th had only been 5 percent contained. The fire prompted the evacuation of 600 residents in the Pleasant Valley and Two Rivers area. Dense smoke made the situation difficult for firefighters to battle the blaze, both from aircraft and on the ground. The Chisana River Fire in eastern Alaska charred nearly 46,000 acres by the end of June after being ignited on May 31st. The fire was burning in a mostly undeveloped part of the state, but its proximity to the Canadian border prompted an international response to limit the spread of the fire. 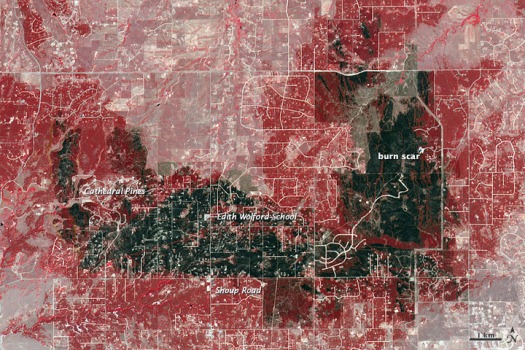 The Black Forest Fire was ignited June 11th to the east of Colorado Springs, Colorado. The fire burned 14,280 acres before being contained on June 20th. Very hot weather conditions, combined with strong winds and drought contributed to the rapid growth of this fire. On the 11th, Denver, just to the north, reached 100°F, the earliest date on record for a triple digit temperature reading in that city. The fire destroyed over 500 homes, and was the most destructive wildfire in Colorado history, surpassing the Waldo Canyon Fire from just last year. Nearly 40,000 people were evacuated from their homes as the wildfire grew rapidly out of control. At least two fatalities resulted from the fire. 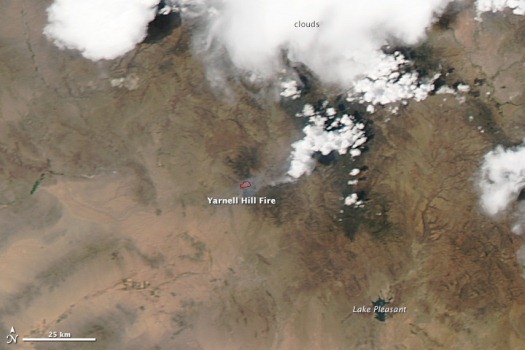 
The Yarnell Hill Fire was ignited by lightning on June 18th, approximately 30 miles southwest of Prescott, Arizona. The fire burned around 8,400 acres before being contained in early July. The fire grew rapidly and spread in an unpredictable manner due to gusty winds from a nearby thunderstorm and the rugged terrain. Nineteen fatalities, all firefighters, resulted from the fire's erratic motion. This marked the most deadly wildfire to hit the U.S. since the East Bay Hills Fire killed 25 people in Oakland, California in 1991. 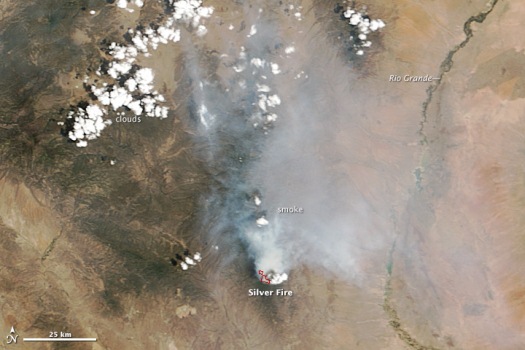 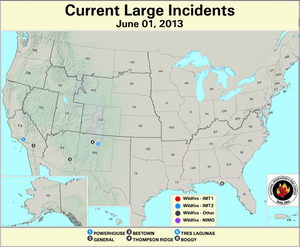 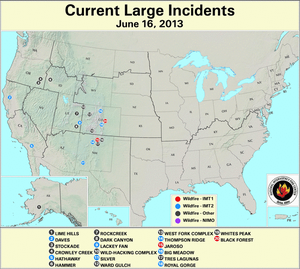 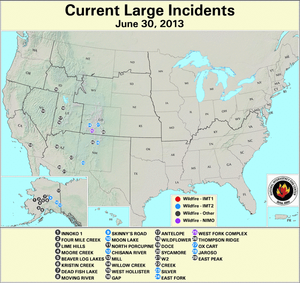