January–March 2018 maps—is generally reflected by areas of positive and negative temperature anomalies at the surface, respectively.

March 2018 was characterized by warmer-than-average conditions across much of the world's surface. However, temperature departures from average varied greatly across the Northern Hemisphere land. Warmer-than-average conditions were present across Alaska, northern and eastern Canada, South America, Africa, Australia and much of Asia. Record warmth was observed across parts of eastern Africa, the Middle East, and southern Asia, which corresponds with the locations that had the most notable warm temperature departures from average (+3.0°C [+5.4°F] or higher) during the month. Near- to cooler-than-average conditions were present across much of the contiguous U.S., southwestern Canada, Europe, and western and northern Russia. Across the oceans, record warmth was observed scattered across all oceans, while cooler-than-average conditions were limited to the North Atlantic Ocean, central and eastern tropical as well as southeastern Pacific Ocean, and across parts of the eastern Indian Ocean. No land or ocean areas experienced record cold temperatures during March 2018.

The global land surface temperature for March 2018 was 1.49°C (2.68°F) above average and the seventh highest since global records began in 1880. The global oceans ranked as the fifth highest on record at 0.58°C (1.04°F) above average. Regionally, three of the six continents had a top ten warm March on record. Europe and Asia had their coldest March since 2013.

La Niña was present across the tropical Pacific Ocean, however it weakened during March 2018. According to NOAA's Climate Prediction Center, a transition from La Niña to ENSO-neutral is likely (~55% chance) during March–May. This forecast focuses on the ocean surface temperatures between 5°N and 5°S latitude and 170°W to 120°W longitude, called the Niño 3.4 region.

Globally, the average land and ocean surface temperature for January–March 2018 was the sixth highest such period since global records began in 1880 at 0.74°C (1.33°F) above the 20th century average of 12.3°C (54.1°F). The 2018 year-to-date value was 0.43°C (0.77°F) lower than the record high set in 2016 and was the coolest such period in the last four years. The years 2015–17 represent the three warmest January–March on record. The first three months of the year were characterized by warmer-than-average conditions across much of the world's surface, with record warmth across New Zealand and its surrounding ocean, and scattered across Far East Russia, southern Asia, southern Australia, and across all oceans. Near- to cooler-than-average conditions were present across the western half of Canada, the eastern half of the contiguous U.S., Europe, western Russia, the central and eastern tropical Pacific Ocean, as well as southeastern Pacific Ocean, and across the Atlantic and Indian Ocean. However, no land or ocean areas had record cold temperatures during January–March 2018. Regionally, Africa, Asia, and Oceania had a top nine warm January–March since continental records began in 1910. Europe had its coldest such period in five years.

The maps below represent precipitation percent of normal (left, using a base period of 1961–90) and precipitation percentiles (right, using the period of record) based on the GHCN dataset of land surface stations. As is typical, precipitation anomalies varied significantly around the world. Precipitation during March 2018 was generally drier than normal across Argentina, the southern half of Australia, north-central Europe, southern Asia, and across parts of the eastern half of the contiguous U.S. Wetter-than-normal conditions were notable across much of Europe, northern Asia, South Korea, Japan, Alaska, and across parts of the northeastern and south-central contiguous U.S. 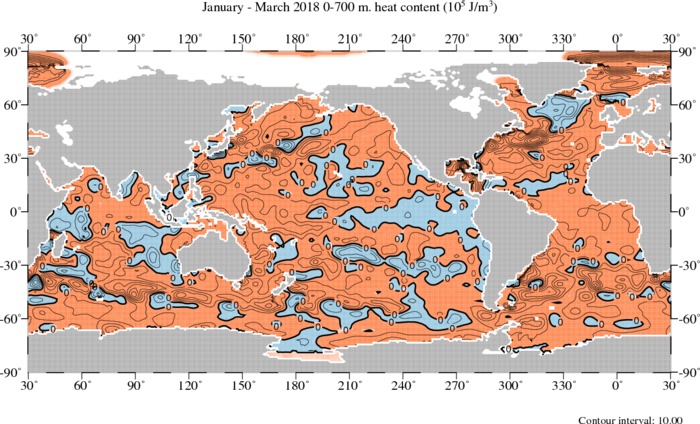 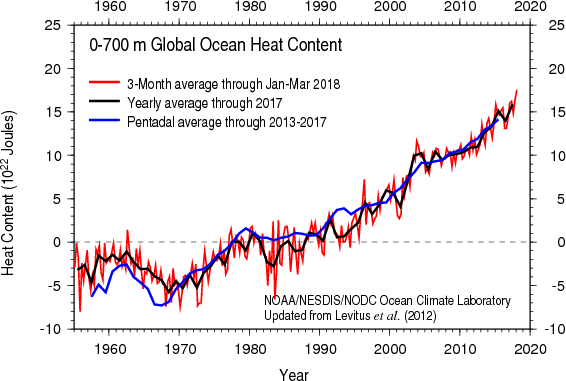 Global OHC for January–March 2018 was the highest January–March OHC in our records, which extend back to 1955; it was, in fact, the highest global OHC for all quarters in the record. Overall, the latest quarterly OHC reveals widespread warmer than normal conditions, a situation observed since the end of 2016. As in the previous quarter, much higher, > 30x10^5 J/m^3, than long-term mean OHC conditions are remarkable at northern high latitudes, i.e. in the Greenland Sea, Norwegian Sea, Barents Sea, and in Baffin Bay. Similarly, much higher than normal OHC is also observed in the Gulf Stream/North Atlantic Current, the Brazil Current, the Gulf of Mexico and the Caribbean Sea, and off the tip of the Antarctic Peninsula. Cooler than normal conditions, < -20x10^5 J/m^3, persist in the subpolar North Atlantic Ocean south of Greenland and Iceland, the central South Pacific Ocean, and the western Equatorial and South Indian Ocean. The cool signal extending westward from the South America coast around the Equator is weaker, with OHC < -5x10^5 J/m^3, than in October-December 2017. Much cooler than normal conditions, < -30x10^5 J/m^3, appear along the southeastern coast of Japan.