In the atmosphere, 500-millibar height pressure anomalies correlate well with temperatures at the Earth's surface. The average position of the upper-level ridges of high pressure and troughs of low pressure—depicted by positive and negative 500-millibar height anomalies on the January 2020 map—is generally reflected by areas of positive and negative temperature anomalies at the surface, respectively. The maps shown above represent precipitation percent of normal (left, using a base period of 1961–1990) and precipitation percentiles (right, using the period of record) based on the GHCN dataset of land surface stations. As is typical, precipitation anomalies during January 2020 varied significantly around the world. January precipitation was generally drier than normal across parts of Alaska, the southwestern contiguous U.S., central and western Europe, New Zealand, and parts of eastern Asia. Wetter-than-normal conditions were notable across the northwestern and eastern half of the contiguous U.S., eastern Brazil, northern Europe, western and central Russia, and parts of southern and eastern Asia. 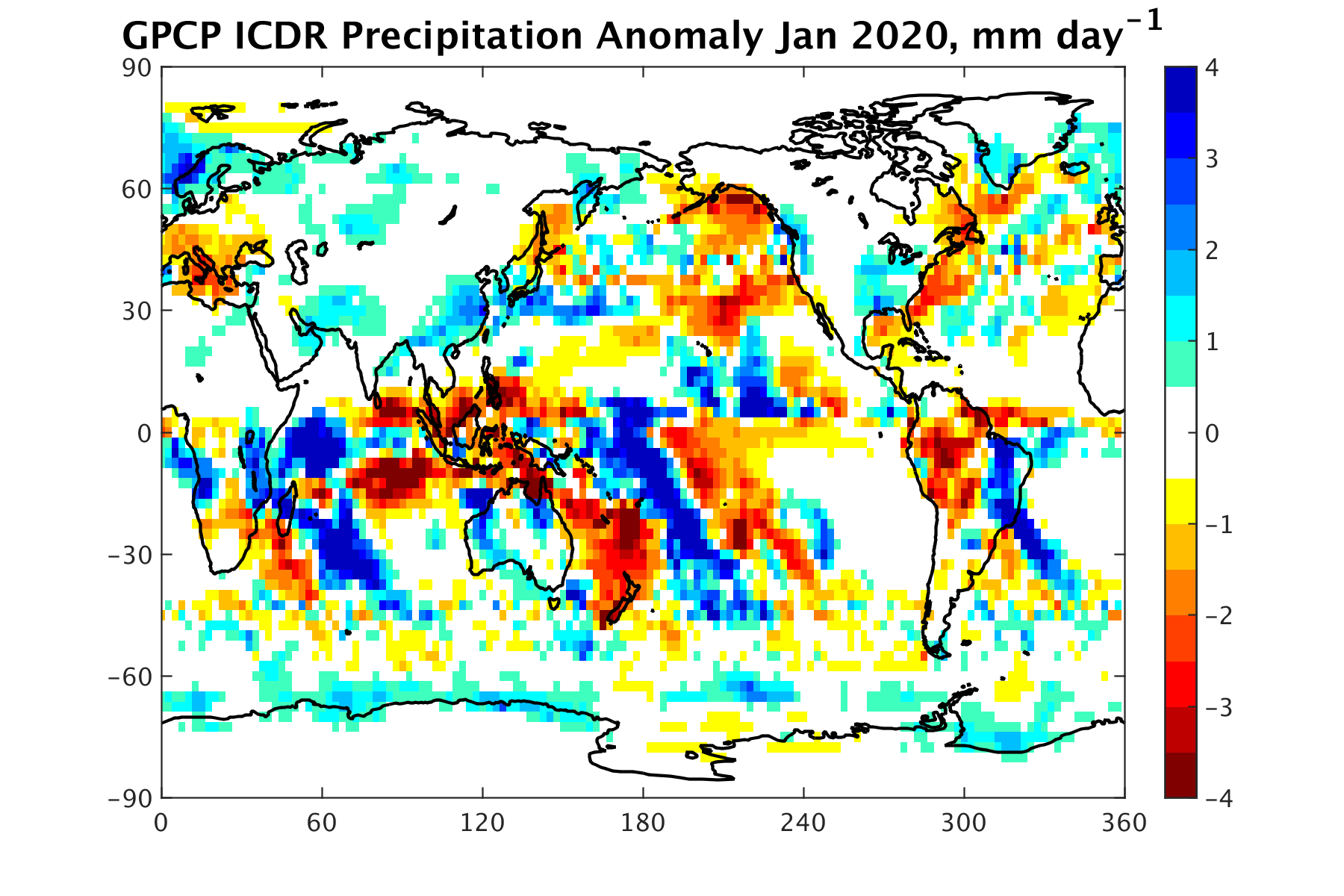 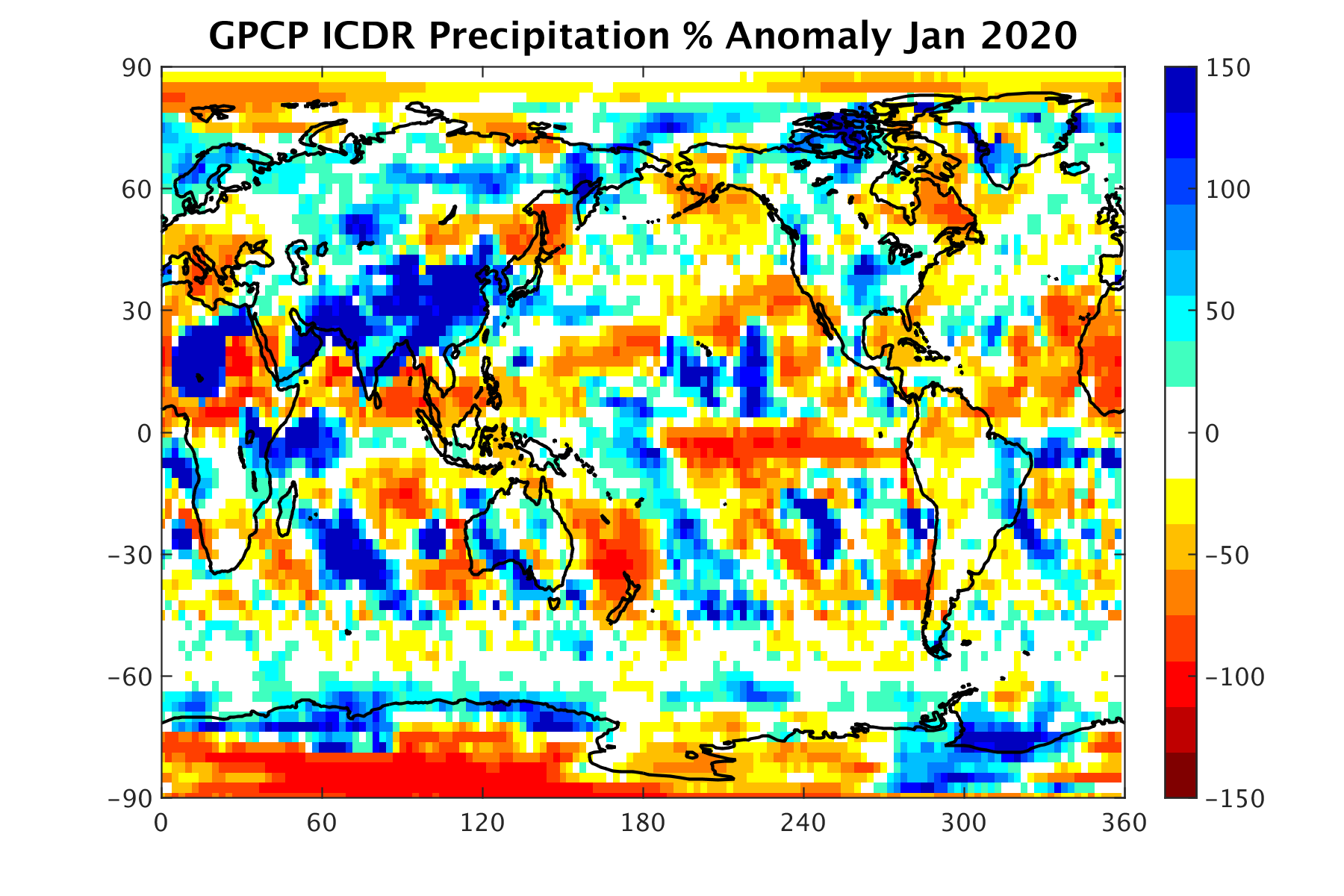 As the sun reaches its furthest south position the major rain features across continents have followed and have peaks south of the Equator (see Africa and South America) as seen in the GPCP global monthly analysis for January 2020. Over tropical oceans, this is also the case in the Indian and Atlantic Oceans, while across the Pacific the ITCZ hovers near the Equator, with a strong extension to the southeast into the Southern Hemisphere as part of the SPCZ. The Asian monsoon produced rainfall across the Maritime Continent and into parts of Australia, giving some relief to the wildfire-ravaged continent.

Positive rainfall anomalies are still prevalent in the western Indian Ocean, as they have been over the last few months, again associated with positive SST anomalies, even though the IOD index has gone neutral due to warming in the eastern portion of that ocean. These rainfall excesses over the ocean extend inland into eastern Africa and are tending to continue the flooding evident over the last few months. A positive SST anomaly off the southwest coast of Africa is also associated with excess rainfall over that ocean area and extending onto the coastal countries.

Australia, which has suffered an extended drought and one of the worst wildfire seasons in their history has gotten some relief in January as the monsoon has arrived. The anomaly field even shows some significant positive features in the north that were associated with floods, mostly in areas of low population density. In the southeast portion of the country, where wildfires were concentrated, the limited rainfall was helpful, but insufficient to end the fires. To the north over the Maritime Continent the monsoon is active, but still shows below normal rainfall for the month. Further to the southeast, New Zealand continues their drought accompanied by a negative precipitation anomaly over the islands and surrounding waters.

Over South America a rainfall maximum is evident in eastern Brazil, with a rainfall deficit over the western part of the continent. This alignment is a flip-flop from last month. The rainfall feature in the east was accompanied by floods and landslides in that area.

In the Northern Hemisphere the typical mid-winter rainfall maxima extend to the northeast from the Asian and North American continents, with the anomaly field showing variations from the mean pattern. For the Pacific feature positive precipitation above the mean is evident at the western edge of the feature in China, extending to the east over the water through southern Japan. Further to the east this midlatitude storm track has mostly negative anomalies. Over North America the U.S. Pacific northwest had a positive precipitation (snow) anomaly, with excess precipitation also in the Midwest and part of the Gulf coast. The Gulf of Mexico itself had a rain deficit.