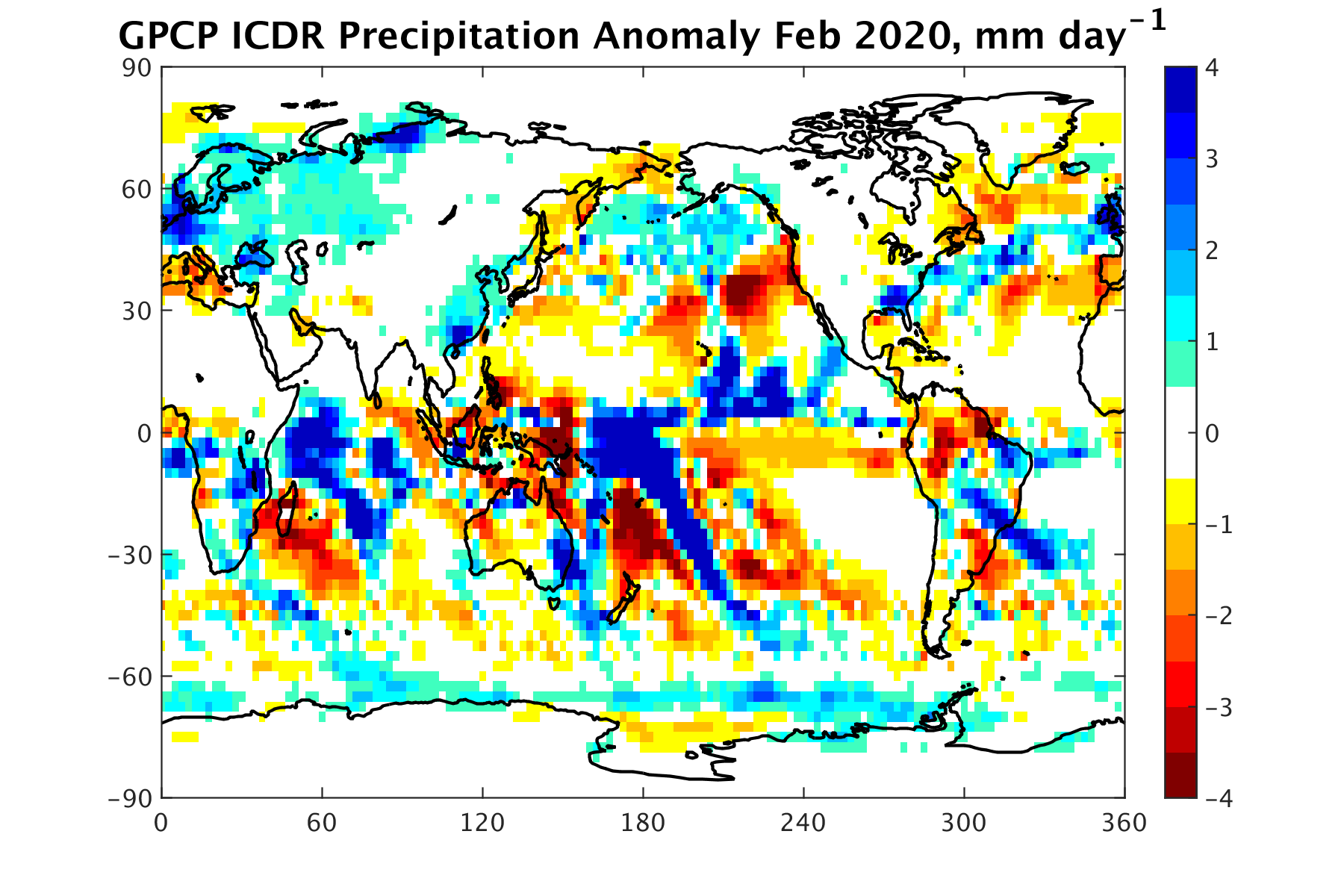 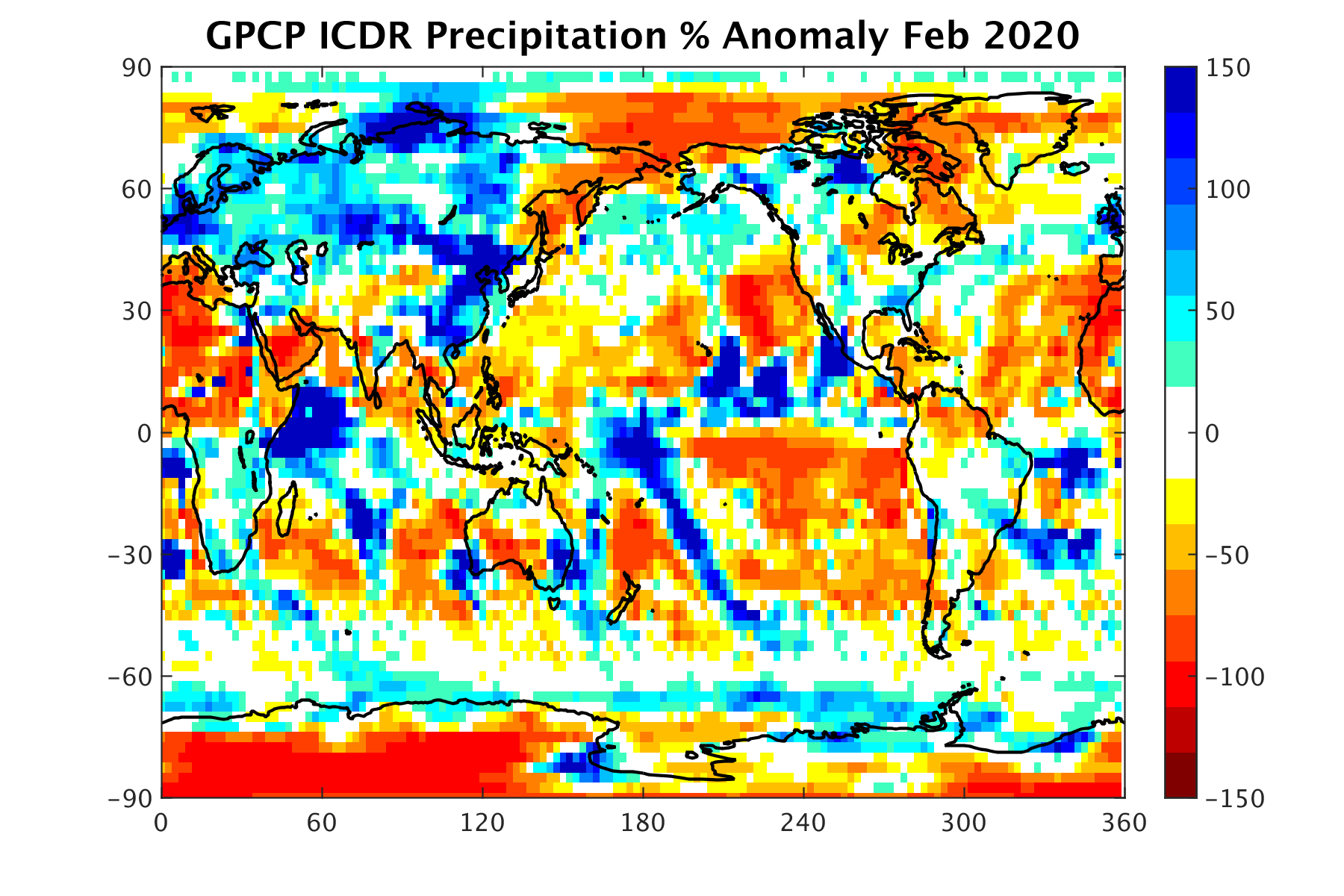 Late winter in the Northern Hemisphere brings active storm tracks across its mid-latitudes and the late summer in the Southern Hemisphere presents active areas of monsoon precipitation across the maritime continent and northern Australia and strong rain features over the oceans south of the Equator. A nearly uniform circumpolar storm track at 60°S is also evident in the GPCP global monthly analysis.

The strongest feature in the monthly map is the large feature centered just south of the Equator near 180° with an extension toward the southeast as part of the SPCZ. Peak rainfall amounts in this feature are above 500 mm. The monthly anomaly map shows this feature as a strong positive with its core at the Equator. A similar positive rainfall anomaly feature has also been present there over the two previous months. In fact, a wave train of positive/negative anomalies has been present all during that period stretching from the western Indian Ocean to the central Pacific along and to the south of the Equator. Starting in the western Indian Ocean a generally positive rain anomaly is prevalent, while in the eastern Indian Ocean and over the Maritime Continent generally negative values are evident. Then comes our main rain feature at about 180° and a negative anomaly feature just to the east. These same anomaly features have been evident since December and even the November anomaly map is very similar. Both ENSO and the Indian Ocean Dipole are in neutral territory so the reasons for this pattern are not obvious. However, a strong positive SST anomaly is located over the Equator at 180° and may play a part.

Although Australia is still roughly in the negative rain portion of the large-scale wave pattern just described, their summer monsoon has broken through to some extent and provided some rain, especially in the southeast to generally end the worst of their fire season, with even some flooding occurring. The general western Indian Ocean positive anomaly again in February has extended into eastern Africa and has amplified their annual rainy season, leading to more floods, even after similar situations the previous two months. In South America, the general dry to the northwest and wet to the southeast has continued from the previous month with flooding and landslides in Rio de Janeiro and Sao Paulo states in Brazil.

The northern hemisphere storm tracks have been active in February. Typical rain maximum extended from eastern China, past Japan and across the northern Pacific to Canada and Alaska. The anomaly map shows generally positive anomalies along the track, especially over eastern China and over the northeast portion of the North Atlantic. The SSTs along the ocean portion of the track are also generally positive.

In the North Atlantic a SST warm anomaly off the east coast of the U.S. seems to spur an active storm track with positive precipitation anomalies extending from the east coast northeastward across the Atlantic to western Europe. The negative anomalies on either side perhaps attest to the repetitive nature of the storms moving across the ocean. And at the eastern end of the track, the UK and western Europe have small, intense positive rain anomalies associated with very serious flooding in the region. Further to the east over much of northern Eurasia the very warm winter continued and produced a very expansive wetter than normal region, best seen in the percentage anomaly field (Fig. 3). The positive area extends eastward from the UK across to the China coast and from north of the Himalayas to Siberia.

At the southwest end of the North Atlantic track a Gulf of Mexico warm SST anomaly probably helps provide some moisture and helps set off a rainfall maximum and associated positive anomaly over the southeast U.S., which was also related to extensive flooding there. 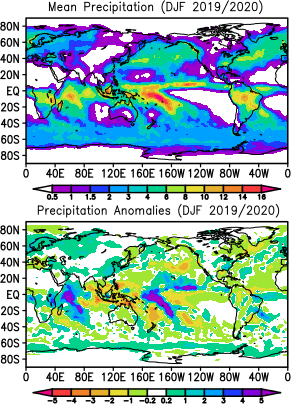 The three-month summary (December 2019–February 2020) contains features indicating some continuity during the northern winter, southern summer. Especially strong is the wet/dry/wet pattern from the western Indian Ocean (wet), to the Maritime Continent/Australia (dry), to the western Pacific (wet). All of these features are at the Equator and to the south. The dry feature emphasizes how much the monsoon failed this area this season. The positive anomaly across central Africa is associated with the floods there this season. The positive rain anomaly across northern Europe is related to warmer than normal season there.