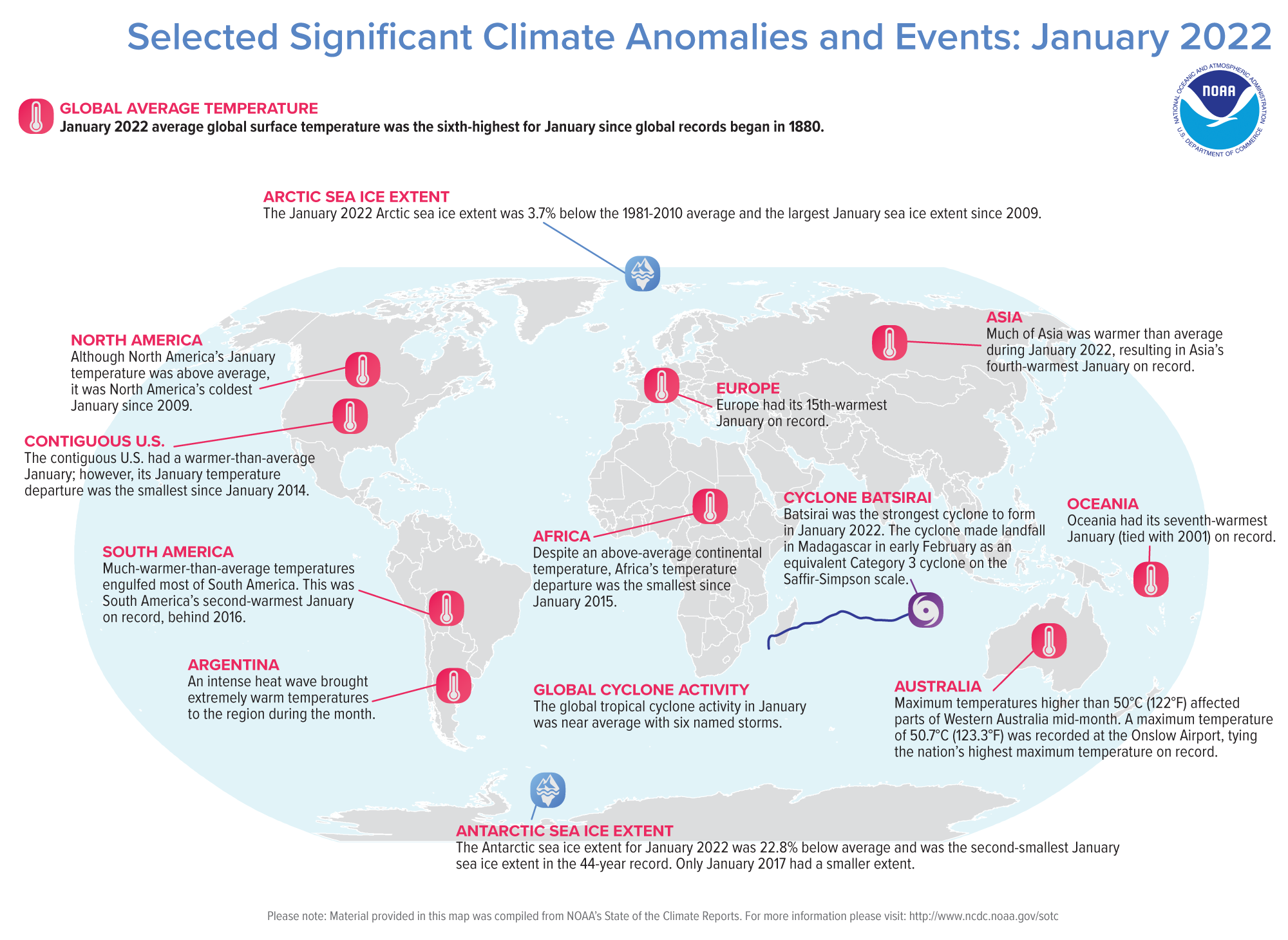 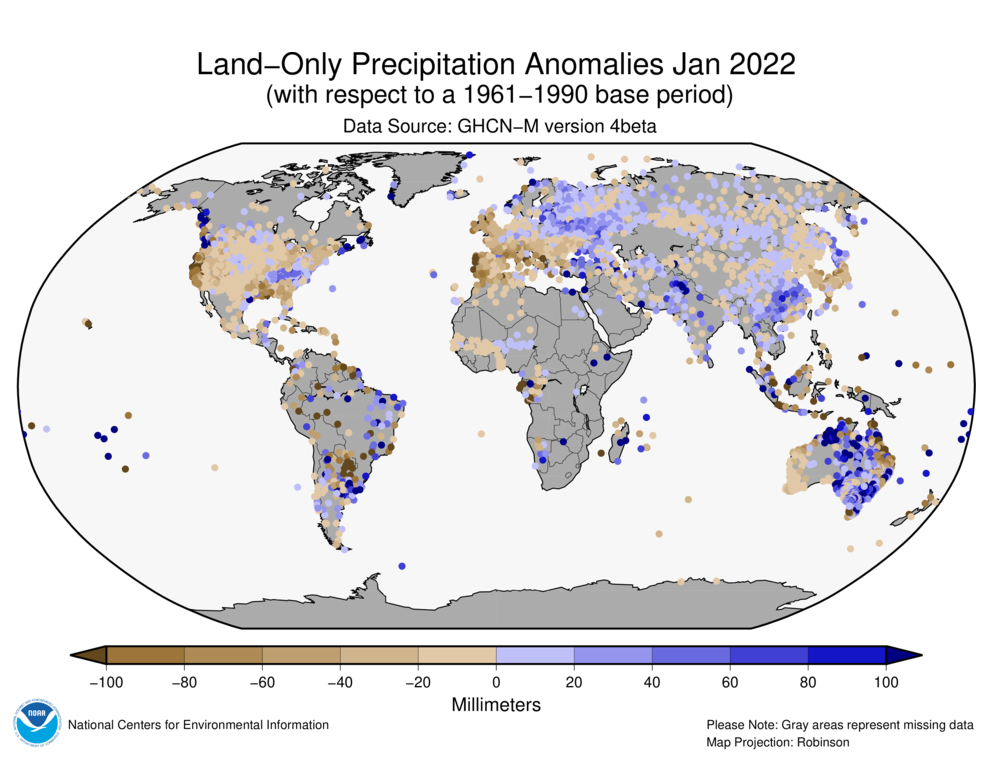 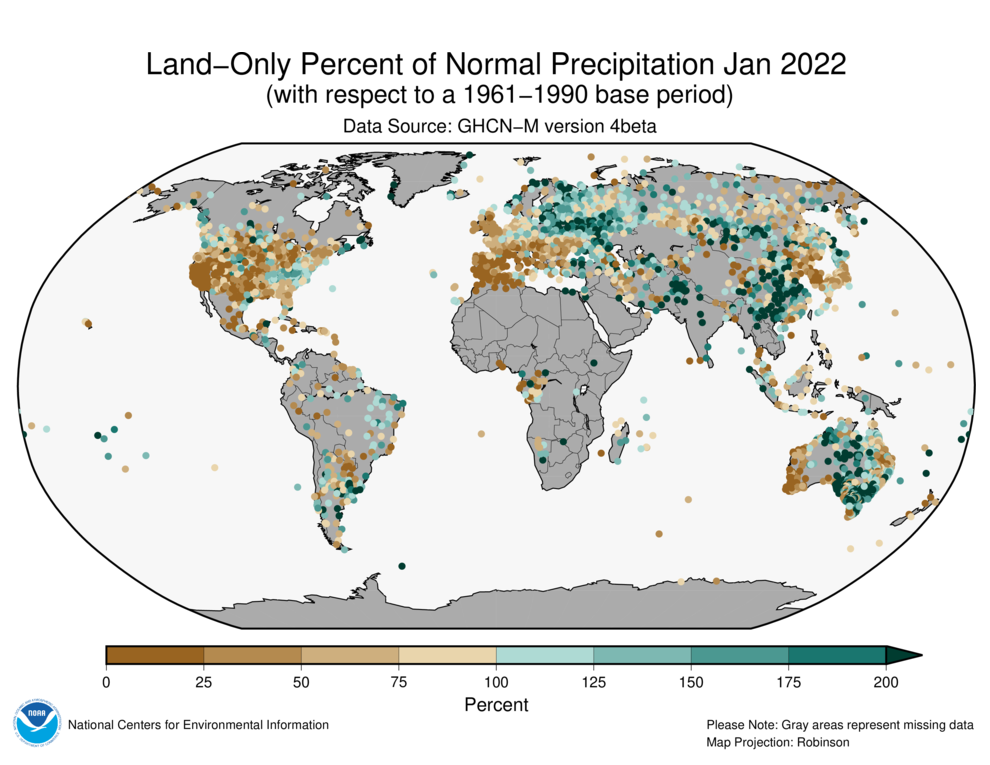 As is typical, precipitation anomalies during January 2022 varied significantly around the world. January precipitation was generally drier than normal across much of the central and western contiguous U.S., Mexico, central and western Europe, western Australia, northern New Zealand, and across parts of the Korean peninsula and Japan. Wetter-than-normal conditions were notable across parts of Asia, southern South America, eastern Europe, and central and southeastern Australia.

Below-average precipitation engulfed much of Spain. The national precipitation total was 26% of normal and was the fifth driest January since 1961.

According to the Japan Meteorological Agency, snowfall fell across parts of northern Japan from late December to early January, with some locations setting new snowfall records. Of note, Hikone in Shiga Prefecture observed a total of 78 cm (30.7 inches), which is a new 48-hour snowfall record for this location.

The Bahrain International Airport at the Kingdom of Bahrain had a total of 58 mm (2.3 inches) of precipitation for the month, which is a little over triple its monthly average rainfall of 18.1 mm (0.7 inch). This was its sixth wettest January since records began in 1902. According to Bahrain's Meteorological Directorate Climate Section, January 1 had the highest daily precipitation during the month when a total of 36.2 mm (1.4 inches) fell. This was the fifth highest daily total for the airport since 1948.

Tropical Storm Ana was the first named storm of the year for the Southwest Indian Ocean basin. On January 24, Ana made landfall in northern Mozambique. According to ReliefWeb, the storm was responsible for destroying over 12,000 homes and damaging over 25 health centres. It was reported that water supply systems, power poles, and roads were also damaged. Heavy rain associated with the storm caused floods, including the flooding of more than 37,000 hectares of crops. 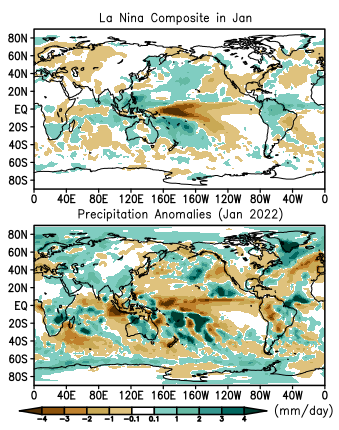 January, in the heart of Northern Hemisphere (NH) winter and Southern Hemisphere (NH) summer, has its monthly precipitation features pushed far to the south (see top panel in Fig. 1). Over tropical oceans the Inter-Tropical Convergence Zone (ITCZ) extends in narrow bands east-west across the Pacific and Atlantic, straddling the Equator. The South Pacific Convergence Zone (SPCZ) extends southeastward from the Maritime Continent into mid-ocean and in the Indian Ocean larger amounts of rainfall are south of the Equator. Over Africa, Australasia and South America, the seasonal rain has also shifted south. At higher latitudes the precipitation patterns have also seasonally shifted southward bringing mid-latitude cyclonic systems to lower latitudes in the NH and higher latitudes in the SH.

Of course, in addition to these seasonal shifts, large-scale climate variations including long-term trends related to global warming and inter-annual-scale changes related to phenomenon such as El Nino-Southern Oscillation (ENSO) combine with synoptic-scale events during the month to achieve the monthly total map, and the anomalies (from the January climatology) seen in Fig. 1 (middle and bottom panels). As has been the case over much of the past 18 months, relative low Sea Surface Temperatures (SST) over the central-eastern Pacific along the Equator, defining the current La Niña conditions, affect the distribution rainfall anomalies across a wide area of the Pacific and beyond. However, for this month a possible weakening La Niña seems to have a more limited range of effect. In Fig. 2 the precipitation anomalies for January 2022 are repeated in the bottom panel and the top panel is a composite anomaly map for La Niña Januarys during the GPCP period (1979–2020). Although the core of the cool SSTs is to the east along the Equator, the westward movement of convective systems results in a relative minimum (negative anomaly) near and surrounding 180° longitude, both in the composite and this January, although the negative feature is more intense in the composite than for this month. The negative feature stretches narrowly to the east along the ITCZ in both maps, but to the west over the Maritime Continent the general positive anomaly in the composite is not well matched by this month's anomaly pattern, which is very mixed. To the south, over Australia, which typically has abundant rainfall during La Niña, there is generally a match with this month's mean continental totals, but the pattern is different.

As we move away from the core central Pacific area, the match between the composite and this month's anomaly pattern is generally weak, with patterns over Africa, South America and South Asia being definitely mismatched. But, over the Pacific and Atlantic ITCZs, the SPCZ area and over the northeast Pacific, off the North American continent, there seems to be a match, indicating an extensive Pacific La Niña effect. Closer to home, over North America, the La Niña composite and this month's map in Fig. 2 agree very well, both showing precipitation deficits over the southwest U.S. and Mexico, and even to the east. A long-term drought continues over this region, and the presence of La Niña doesn't help.

Elsewhere across the globe the precipitation anomalies for this January reflect mostly smaller-scale events. Southeast Africa displays an intense positive anomaly, mainly associated with Tropical Cyclone Ana that hit Madagascar and Mozambique. Positive anomalies across the Middle East and South Asia do not match the typical dry season usually observed in these areas and included unusual floods in Iran and Oman. Even Quito, Ecuador, in the middle of a broad negative anomaly in northwest South America, had devastating floods and landslides at the end of the month. Much of western Europe had a precipitation deficit for January and this had prolonged the drought conditions over much of that region, although the positive anomaly to the east over Russia has helped to alleviate similar conditions there. 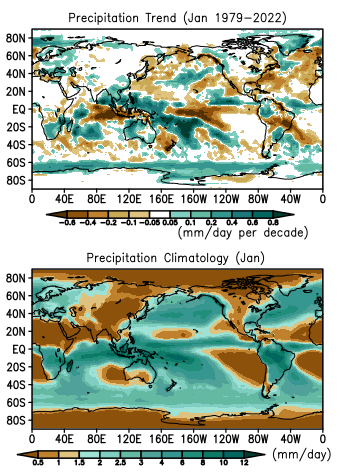 Expanding our time scale we can look at the observed trend map for January (Fig. 3, top panel), along with the January climatology map (Fig. 3, bottom panel). Strong positive and negative features are observed over the tropical oceans (the global trend is very near zero) and help to verify climate models, when they are forced by observed SSTs, and these features are related in part to global warming. Over the eastern Pacific off the west coast an observed drying trend exists from Hawaii into the southern U.S. and Mexico. Combining this negative trend feature with the inter-annual La Niña negative push there (see Fig. 2) indicates that the current general drought in this region is related to occurrences at various time scales, which sometimes must be analyzed together to help understand even an individual month's precipitation anomalies. For example, Los Angeles had one of its driest Januarys ever this past month, most likely related to a combination of these causes, occurring at various time scales.