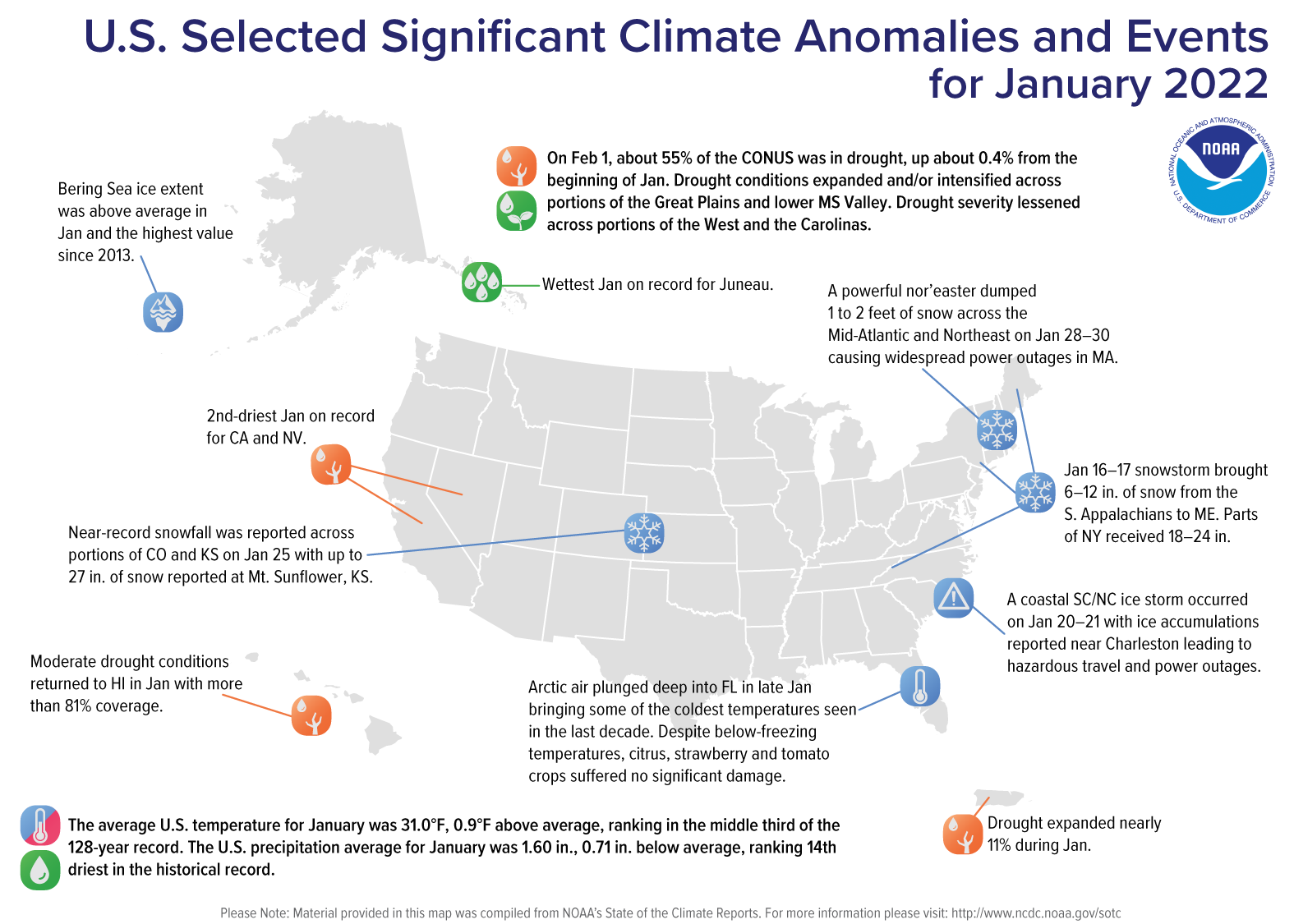 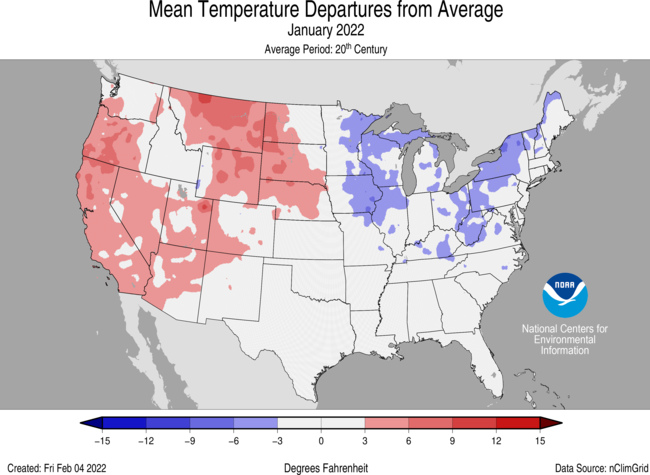 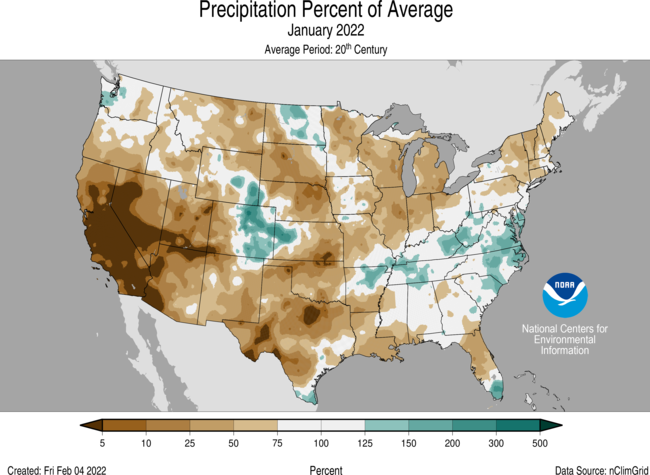 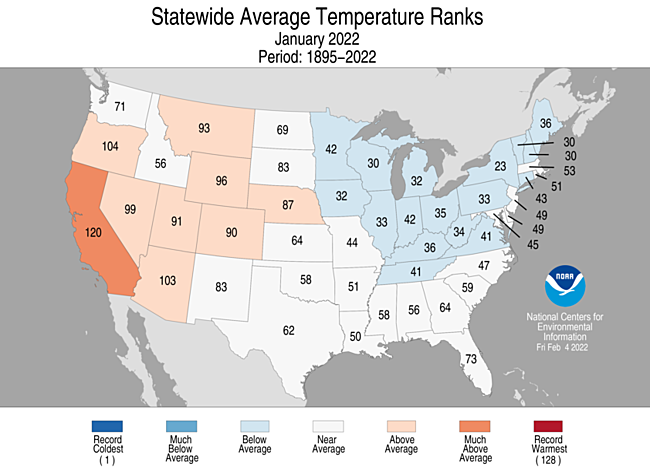 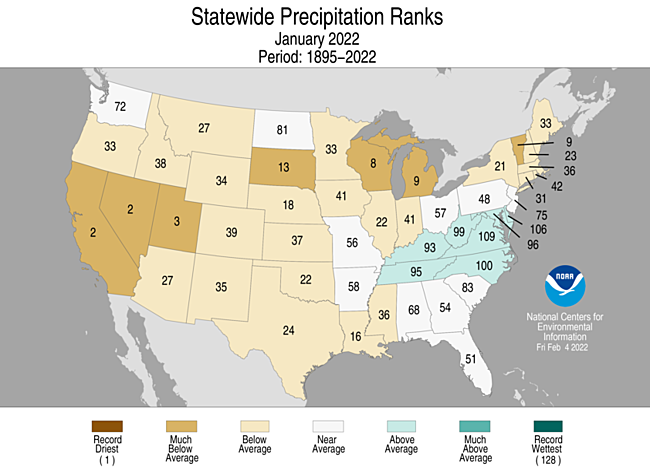 January was on the cool and dry side across most of the Southern Region.

January 2022 was the first month of winter in the Southern Region. Normally, December is the first month of winter, but this past December featured record-setting warmth. In contrast, January 2022 was somewhat cooler than the long-term median, ranking 57th coolest with a region-average temperature of 43.0 F (6.1 C). Mildest compared to historical conditions was Mississippi at 44.5 F (6.9 C), ranked 59th coolest, while its neighbor to the north, Tennessee, ranked 36th coolest at 36.0 F (2.2 C). The coldest temperature was recorded on January 30 at Mt Leconte, Tennessee, at -6 F (-21 C), while the warmest temperature was recorded by a RAWS site at Falcon Lake, Texas, on January 1, with a reading of 99 F (37 C). Eighteen stations along a swath extending from deep South Texas to eastern Tennessee recorded all-time record high temperatures for January during the very beginning of the month, before winter began. Sewanee, Tennessee, reached 73 F (23 C) on January 2, which is 2 F (1 C) warmer than any previous January in 126 years of records, while Athens, Tennessee, broke its previous record by 3 F (2 C). Meanwhile, by the end of the month, almost the entire region, with the exception of parts of the Lower Rio Grande Valley and the Texas coast, had experienced below-freezing temperatures.

Drought conditions generally worsened across the Southern Region. Two-category degradations in the US Drought Monitor were noted in central and south-central Texas, southern Arkansas, and parts of Louisiana and Mississippi near Baton Rouge. In contrast, conditions improved from southeast Texas to central Mississippi and across central Arkansas and western Tennessee. The percentage of the region in drought grew from 54% on December 28 to 70% on February 1, severe drought grew from 30% to 52%, extreme drought grew from 8% to 24%, and exceptional drought emerged in the Oklahoma Panhandle. All states except Tennessee had some extreme drought conditions; in Oklahoma, about half the state was in extreme drought. Primary impacts continue to be with winter wheat, grazing, and wildfire danger, but spring planting will be at risk if the dry weather continues into spring.

The most notable event was the severe weather on January 8-9 in Texas, Louisiana, and Mississippi discussed in the severe weather section. Three EF1 tornadoes and one EF0 tornado struck the Houston metropolitan area, fortunately without causing any deaths or serious injuries.

Three episodes of severe weather affected the Southern Region in January. The cold front that effectively started winter on January 1 and 2 was associated with an EF1 tornado that touched down in Alabama and tracked for about ten miles in southern Tennessee, producing primarily tree damage. Sixteen high wind reports were received from Tennessee and one from Oklahoma. On January 8 and 9, eight tornadoes touched down in southeast Texas and Louisiana, including four within the Houston metropolitan area. The most severe was an EF2 tornado that destroyed several homes between Leesville and Many in west-central Louisiana; many of the others were EF1. No deaths or injuries were reported. There were also reports of high winds in Texas (4), Louisiana (3), and Mississippi (2), and large hail in Texas (1) and Mississippi (2, with the largest being 1.75" (4.5 cm)). Lastly, two thunderstorms produced considerable hail on January 19 in east Texas, one near Longview and Marshall and the other near Lufkin and Nacogdoches, with a maximum diameter of 2.5" (6.5 cm) near Marshall.

January started with well-above average to near-record snow water equivalent throughout the Sierra Nevada, southern to central Cascades, and the southern interior mountains. Following the extremely dry January with no snowpack accumulation, windy conditions, and above normal solar radiation and temperatures, snowpacks suffered and dropped to near-normal conditions. Mountains in the central Great Basin and southern Cascades fell to below-normal. With near-normal precipitation, snowpacks in the northern Cascades maintained their climatological accumulation, finishing the month with close to average conditions along the western. Drier-than-normal conditions caused interior Rocky Mountain snowpacks to fall to slightly below-normal. Despite the wet start to the water year in many locations, subsequent winter months will need to be wetter than normal to help ameliorate longer-term drought conditions. Drought in the West is overall less severe than at this time in 2021 with less than 20% of the West in extreme to exceptional drought compared to 45% one year ago.

The blocking ridge of high pressure over the west favored generally near to slightly above-normal temperatures in the Pacific Southwest (0-3°F; 0–1.8°C). The Pacific Northwest experienced somewhat colder (2-6°F; 1.2–3.3°C) than normal temperatures, with the coldest anomalies found in central Idaho. Pocatello, ID observed its 28th coldest January since record-keeping began in 1939 with a mean temperature of 21°F (-6.1°C), which is 4.6°F (2.6°C) below normal. Hot temperature anomalies (2-6°F; 1.2–3.3°C above normal) occurred east of the Rocky Mountains in Montana and Wyoming and east of the Wasatch Range in Utah with several pockets of much above normal (6-8°F; 3.3-4.4°C) in the central eastern Montana high plains and northeastern Utah.

Sea surface temperatures (SST) north of the Hawaiian Islands continue to measure 1.5–3°F (1-1.8°C) above normal. Colder SST anomalies associated with stronger-than-normal trade winds and enhanced equatorial upwelling (signals of La-Niña) also continue to be observed south of the islands. Consistent with the anomalously warm SSTs, temperatures on the Hawaiian Islands also were above normal. Precipitation was varied across the islands. Honolulu (Oahu) received 6.34 in. (161 mm) of precipitation, making January its 14th wettest since record keeping began in 1940 (345% of normal). Yet at Kahului (Maui), only 0.08 in (2 mm) were recorded, the fourth driest January (3% of normal) since observations started in 1905.

Temperatures in Alaska were generally near normal during January, with above normal temperatures being observed in Southcentral Alaska. With a mean January temperature of 20.7°F (-6.3°C; 3.8°F (2.1°C) above normal), Anchorage observed its 17th warmest January since observations began in 1953. Precipitation anomalies across Alaska ranged from below normal in the Western and Interior regions whereas Southeast Alaska received well-above normal precipitation. Juneau observed 12.29 in. (312 mm) of precipitation, its wettest January (204% of normal) since records began in 1937. Snowpack also ranged widely at the end of January, with SNOTEL stations in the White Mountains northeast of Fairbanks reporting record values of snow water equivalent but stations in the Kenai Peninsula reporting below median snow water equivalent. North of the Turnagain Arm in the Chugach Mountains, snowpacks were above median. Bering Sea ice extent ended the month above the long-term average and at its highest extent since 2013.

Record Wet January in Southeast Alaska Leads to State of Emergency: Heavy snowfall followed by rainfall in southeastern Alaska resulted in officials declaring a state of emergency in response to numerous impacts. In addition to typical flood impacts, buildings were collapsing beneath the weight of water-laden snow on roofs throughout the region, Juneau schools were cancelled due to unsafe street conditions, and water supply infrastructure in Klawock was damaged. Rain-on-snow loading combined with a weak snowpack structure promoted widespread avalanche activity in Southeast Mountains throughout the month. Emergency responses have been hampered by poor road conditions and avalanche hazard.