The northeastern U.S. and southern Canada in particular had very little snow during March. For the first time on record, both Syracuse and Rochester, New York received no snowfall for the month. The montly average snowfall for these cities is 18.2 inches (46.2 cm) and 15.6 inches (39.6 cm), respectively. In Canada, unusually low snow accumulations were widespread. Toronto averages 9 inches (23 cm) of March snow, but for the first time since 1845, no snow was observed in the city. Ottawa, Montreal, and Calgary all experienced much below average snowfall for the month. Light snow accumulations during March across these regions is consistent with the ongoing El Niño which has been present for the entire winter season — see the Climate Prediction Center for additional El Niño information. 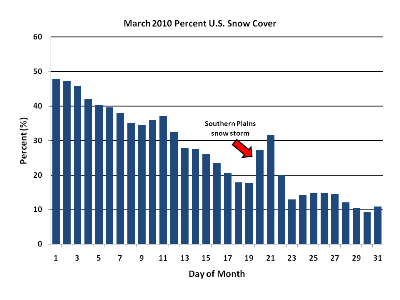 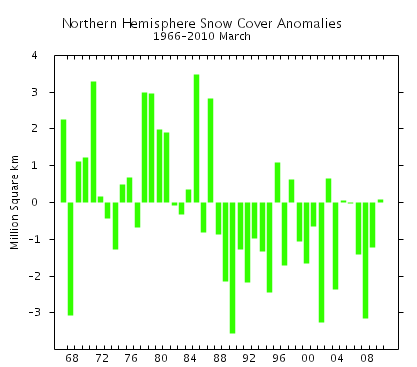 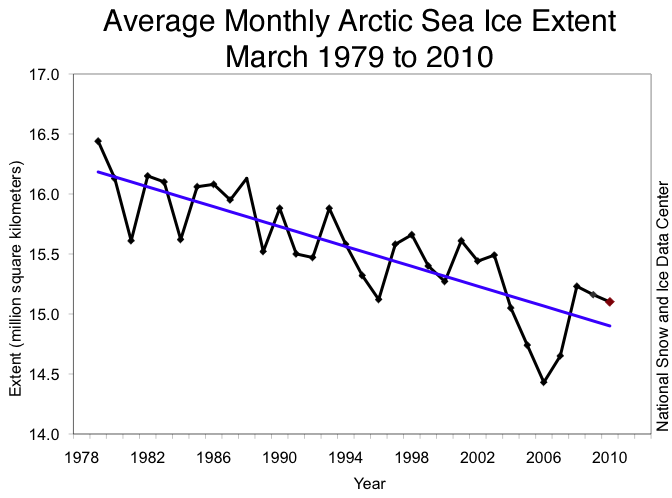 At the mid-point of March, the Great Lakes had a record low ice extent. The region experienced temperatures which were above-normal or near-normal every month since November, the period when the ice typically forms and is maintained. March also brought temperatures that were much above-average, and melted most of the ice that had previously formed. According to The Canadian Ice Service, on March 19th, the ice coverage on all of the Great Lakes reached its lowest extent on that day since 1973. On this date, typically 31 percent of the lakes are ice covered, but this year around 3.5 percent had ice — confined to the northern bays of Lake Superior and Lake Huron.

A strong storm brought heavy snowfall from the Rocky Mountain Front Range across the Southern Plains on March 19th through 22nd, creating a white start to the beginning of Spring. The snowfall coupled with strong winds caused near-blizzard conditions in Oklahoma, Texas, Arkansas, and Missouri. According to the Associated Press, at least five deaths in four states were attributed to the storm. The storm brought over 20 inches (51 cm) of snow to portions of Wyoming, Colorado, and New Mexico. Accumulations over 10 inches (25 cm) were common across the rest of the Southern Plains, with portions of Missouri, Kansas, and Arkansas receiving over a foot (30 cm). The month of March has been one of extremes for Oklahoma City, the day before the snow began on the 20th, the city experienced a high temperature of 72 degrees F (22 degrees C). This storm also topped off a very snowy season for the region. Oklahoma City had its fifth snowiest winter with 23.3 inches (59 cm) of snowfall, and Wichita Falls, TX had its snowiest season with 16.6 inches (42 cm).