At the beginning of April, 13.9 percent of the contiguous U.S. had snow on the ground, and was confined to the mountainous West, northern New England, and parts of New York state. April was warmer and drier than normal for most of the eastern U.S., which limited snow accumulations during the month. According to the Rutgers Global Snow Lab, a NOAA supported facility, the U.S. snow extent for April 2010 ranked as ninth smallest in the 44 year satellite record at 434,000 square miles (1.1 million square km)—312,000 square miles (0.8 million square km) below the long–term average of 746,000 square miles (1.9 million square km). The low extent is partially attributable to the warm temperatures for March and April across the northern tier of the country melting the snow that fell during the winter season (December 2009–February 2010) and limiting any additional accumulations. By the end of April, 10.3 percent of the contiguous U.S. as under snow —the high terrain of the West and a portion of New York, Vermont, New Hampshire, and Maine as the snow from a late season storm remained on the ground. 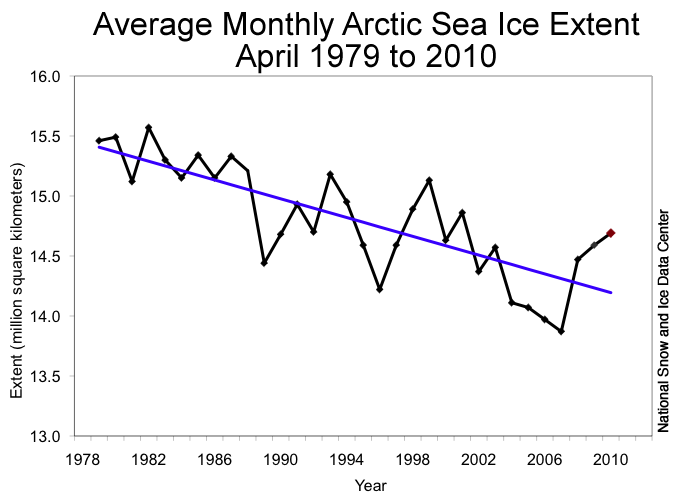 Arctic Sea ice extent was near the long–term average during the month, marking the largest April extent since 2001. The ice extent averaged 5.67 million square miles (14.69 million square km) for April, 120,000 square miles (310,000 square km) below the 1979–2000 average. The rate of ice extent decline for the month was 16,000 square miles per day (41,000 square km), which is also near normal. The late season growth spurt of the ice in March (see March snow and ice report), delayed the typical start of the melting by a month. This late start to the melt season was a significant factor in the near–normal April ice extent. Please see the Arctic Sea ice analysis by the National Snow and Ice Data Center for additional information. 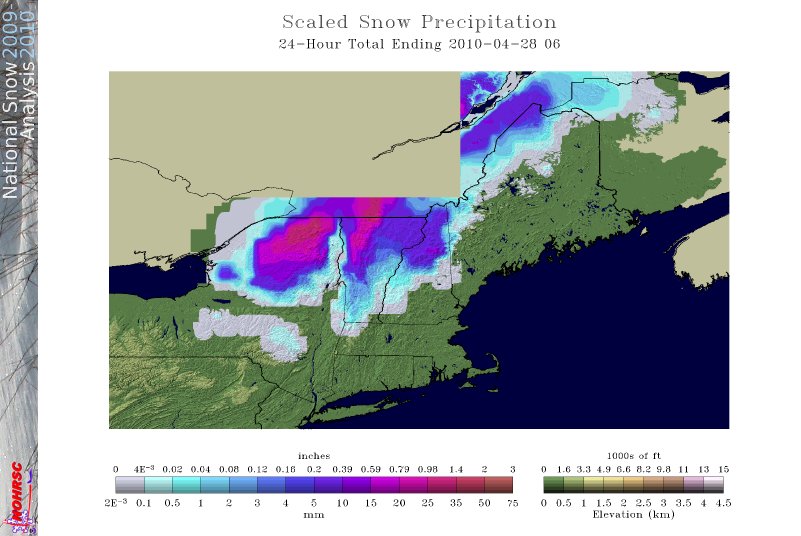 A rare, late–season snow storm brought significant snow accumulations to parts of New England and Upper New York State the last week of April. Over 20 inches (50.8 cm) of snow were reported in Vermont’s Green Mountains. Snowfall reports greater than a foot (30.5 cm) were widespread. Daily snowfall records were broken at the Burlington International Airport on the 27th and 28th, with the city receiving 5.5 inches (14 cm) for the entire event. At the peak of the storm nearly 30,000 homes were without power in the region (Source: AP).

Please note: this will be the last monthly U.S. snow and ice report until October 2010

NOAA National Centers for Environmental Information, State of the Climate: Monthly National Snow and Ice Report for April 2010, published online May 2010, retrieved on May 26, 2022 from https://www.ncei.noaa.gov/access/monitoring/monthly-report/snow/201004.