During January, much of the eastern U.S. was warmer than average while the West was cooler than average. Precipitation was more of a mixed bag with wetter-than-average conditions stretching from the Southern Plains into the Midwest and Mid-Atlantic while much of the West, Southeast, and Northeast were drier than average. According to NOAA’s National Snow Analysis, at the beginning of January, 66.6 percent of the contiguous U.S. had snow on the ground — the high terrain of the West and Great Basin, the Northern and Central Plains, the mid-Mississippi and Ohio river Valleys, the Great Lakes and much of the Northeast. The nature of the large January 1st snow cover was somewhat deceiving as many locations across the Great Plains, Midwest, and Northeast that did have snow on the ground had below-average snow depth. By January 31st, 44.6 percent of the contiguous U.S. was snow covered — the high elevations of the West, the Northern Plains, Western Great Lakes, and northern New England. 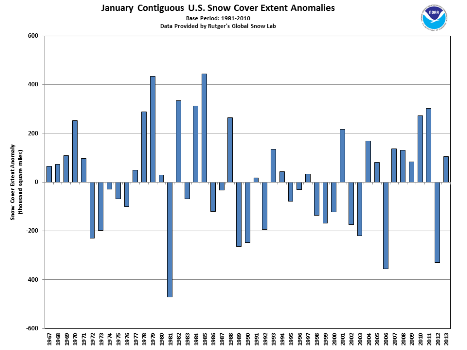 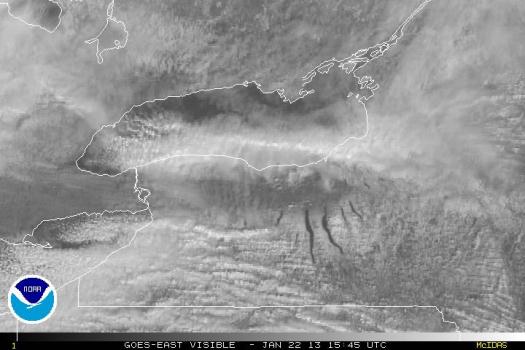 January was marked by large temperature swings, particularly east of the Rockies. These swings in temperature were associated with strong cold fronts traversing the country. Ahead of the cold fronts, warm temperatures surged northward while along and behind these fronts, snow and cold temperatures were observed. For most locations, these shots of cold air and snow were short lived with only minor snow accumulations observed. These storms were partially responsible for the large snow cover extent, while snow depths were several inches below average across the Great Plains, Midwest, and Northeast. The exception was the lake effect snowfall across parts of the Great Lakes region when the cold air outbreaks moved over the warm and mostly ice free Great Lakes. Some locations in New York received over 3 feet of snow during these lake effect events.