During February, a large portion of the nation, including the West Coast, Central and Southern Plains, Midwest, Southeast, and much of the East Coast had temperatures near the period of record (1895-present) average. The northern tier of the country, mainly along the U.S.-Canadian border as well as the Gulf Coast were warmer than average. Below-average temperatures were anchored in the southwestern United States. A large portion of the West was drier than average while the East, particularly the Great Lakes region and Gulf Coast, were wetter than average. According to NOAA’s National Snow Analysis, at the beginning of February, 48.5 percent of the contiguous U.S. had snow on the ground — northern New England, along the crest of the Appalachians from New York to North Carolina, the Great Lakes, Northern Plains, and the high terrain of the West. By the end of the month, the snow cover total changed little, with 47.8 percent of the nation having snow on the ground — the Northeast, Appalachians, the western Great Lakes, the Northern and Central Plains, and much of mountainous West. 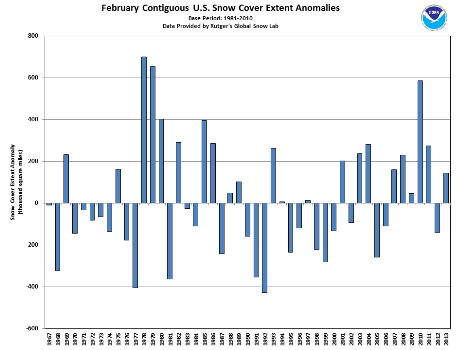 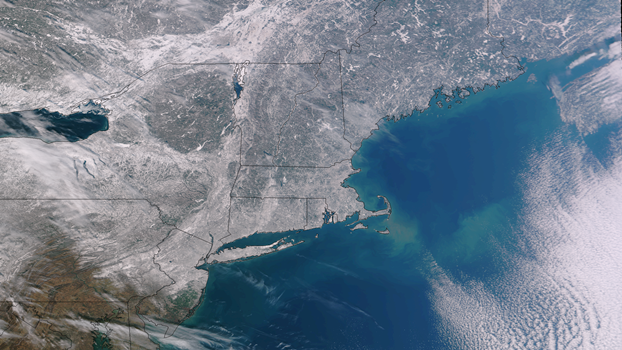 A large and powerful winter storm, referred to as a Nor’easter, hit the East Coast on February 7th-10th dropping heavy snowfall from New Jersey to Maine. The storm was rated a Category 3 on a scale from 1 to 5 on NOAA’s Northeast Snowfall Impact Scale (NESIS), which takes into account snowfall in populated areas to understand societal impact. A Category 3 denotes a “major” winter storm for the region. This was the most significant snow storm to hit the region since February 2010. The footprint of heavy snow was relatively small when compared to other Nor’easters, but the heavy snowfall in the densely populated New York City and Boston metro areas led to a high NESIS value. Hamden, Connecticut had the highest reported snowfall total with 40.0 inches. The 21.8 inches at Boston’s Logan Airport was the sixth largest single storm total on record for the city. In Portland, Maine, 31.9 inches of snow fell, and according to the National Weather Service, was the largest storm total for the city. Other impacts from the storm included strong winds and storm surge. Wind gusts in excess of 80 mph led to blizzard conditions for many locations. The storm caused significant storm surge along the Massachusetts coast, but since the storm hit at low tide coastal flooding was only a minor issue. 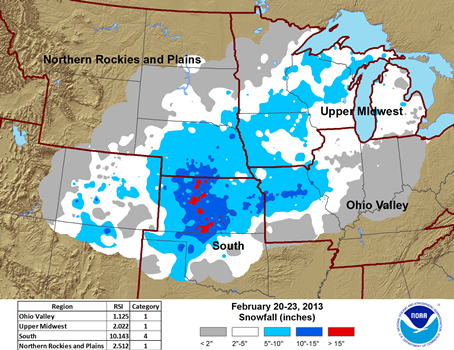 The first of back-to-back major winter storms impacted the Central Plains, parts of the Ohio Valley, and Upper Midwest states on February 20th–23rd. The storm was the result of a powerful low pressure system that emerged from the Southern Rockies, dropping heavy snow from New Mexico to Michigan. The heaviest snowfall was centered on Kansas, with a large portion of the state receiving over a foot of snow. Wichita, Kansas received 14.2 inches of snow, marking the second largest single-storm snowfall total for the city, behind a 1962 storm when 15.0 inches of snow was observed. Russell, Kansas received 22.0 inches of snow from the event. In the South Climate Region, the storm ranked as a Category 4 on the Regional Snowfall Impact (RSI) scale, a regional variant of the NESIS. This marked the 10th most significant winter storm on record for the region. Despite numerous negative impacts, the precipitation was a welcomed sight for many as it provided some drought relief in the region. 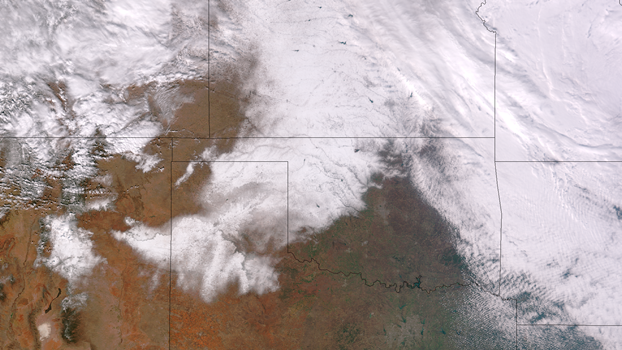 The second of the two major winter storms to hit the central U.S. occurred on February 25th–28th. Heavy snowfall was once again reported from New Mexico to Michigan, but the heaviest snowfall totals were displaced farther south compared to the previous storm. The northern Texas panhandle and western Oklahoma bore the brunt of the heavy snow and wind. Wichita, Kansas, received an additional 6.8 inches of snow, contributing to a monthly total of 21.2 inches of snow for the city — the most on record for any month. The previous snowiest month was February 1913 when 20.5 inches of snow was observed. Blizzard conditions were reported in the Texas Panhandle and western Oklahoma for several hours, with visibilities reduced to less than 50 feet. Numerous roads, including interstate highways 40 and 27, were closed for several hours as crews were not able to keep roads clear due to the rapid rate of snowfall. Amarillo, Texas, received 19.0 inches of snow with winds of 75 miles per hour. Numerous snow records were broken or nearly broken for Amarillo — this was the third largest snow event for the city, the second largest calendar day snowfall of any date, and the largest single day snowfall during the month of February. The strong winds and heavy snow resulted in snow drifts exceeding 10 feet in height. This storm also provided some drought relief to the areas where snow was observed.