At the beginning of January, 42 percent of the contiguous U.S., including much of the West and the Rocky Mountains extending into New England, was blanketed in snow. By the 11th, warmer temperatures encroached upon the lower elevations of the western U.S. as well as the High Plains and erroded the snow cover to approximately 28 percent. Two mid-month storm systems swept down from Canada and brought new snowfall across a wide swath of the U.S. from Kansas to Pennsylvania and into the Northeast. According to NOAA's National Snow Analysis, on January 22nd, 51.3 percent of the contiguous U.S. had snow on the ground — the peak for the month. An Arctic air outbreak at the end of January brought near-record to record cold temperatures to parts of the Midwest accompanied by dangerously cold wind chills. With large sections of the Great Lakes still ice free, significant lake effect snowfall occurred across portions of the Great Lakes. By the end of January, 40 percent of the Lower 48 states was covered in snow. 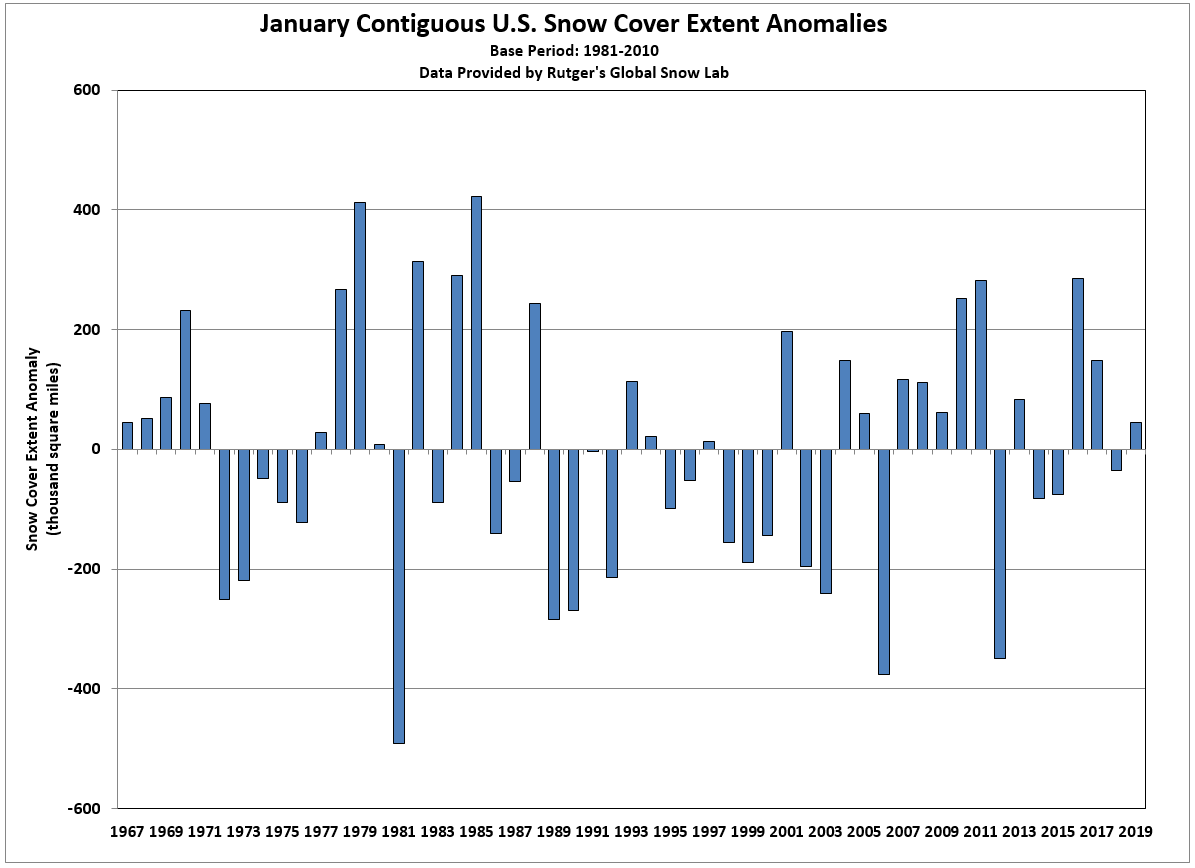 According to NOAA data analyzed by the Rutgers Global Snow Lab, the monthly snow cover across the contiguous U.S. was 1.41 million square miles, 45,600 square miles above the 1981-2010 average. This was the 24th largest January snow cover extent in the 53-year satellite record. Above-average snow cover was observed across the Rocky Mountains, High Plains, Ohio Valley and into the Northeast. Below-average snow cover was observed for much of the central and southern Plains. 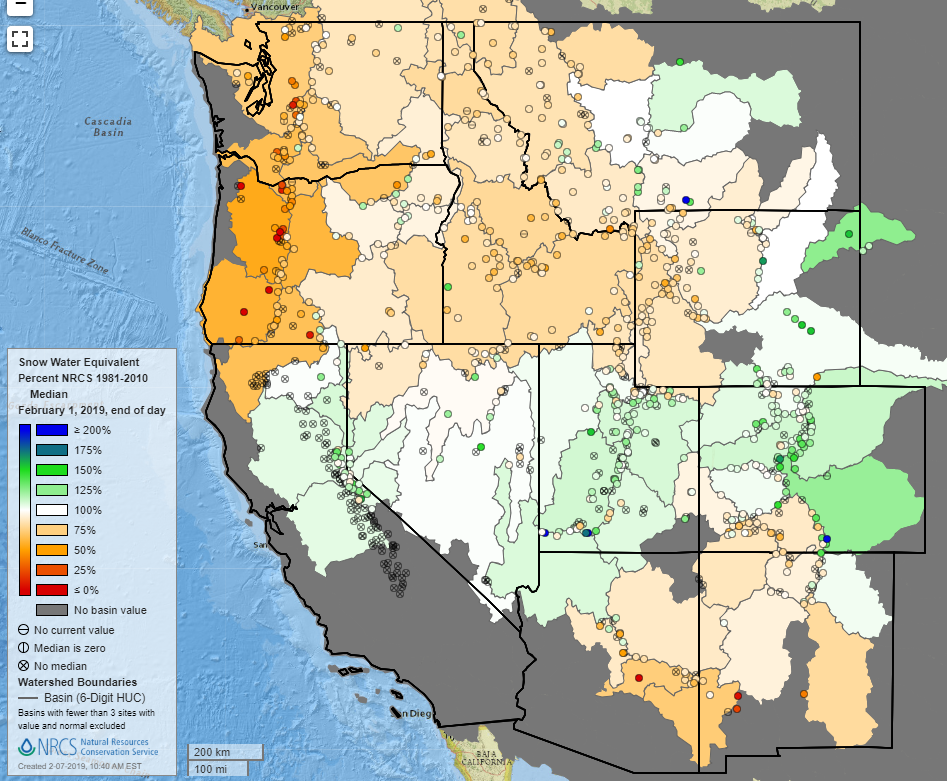 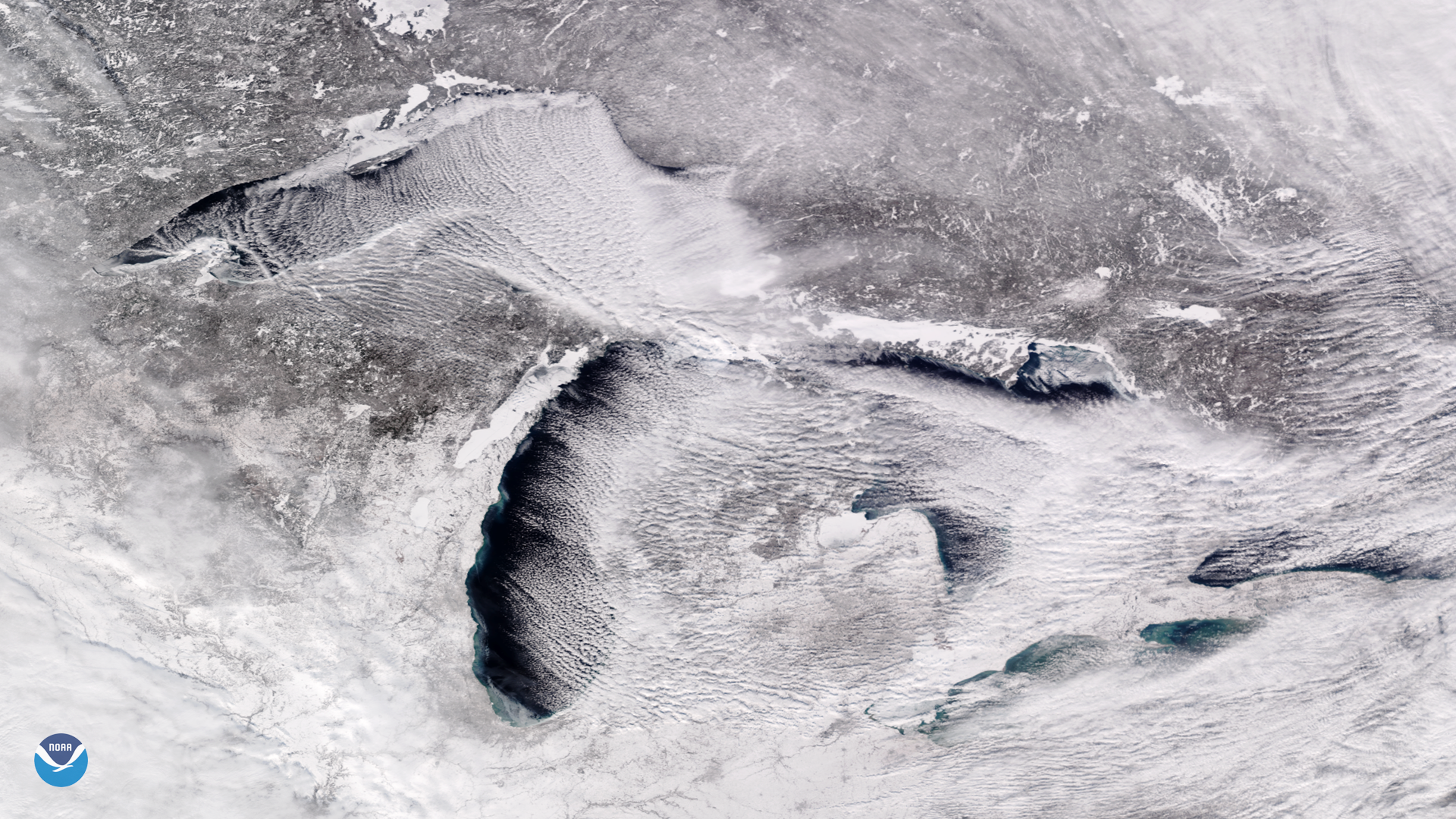 At the end of January, a significant Arctic airmass plunged into the High Plains and Great Lakes states bringing dangerously cold temperatures and wind chills. With significant portions of the Great Lakes ice-free, the cold air moved over the relatively "warm" lake water, causing the air to rise and condense. As a result, cumulus clouds form in bands parallel to the prevailing wind direction and begin to precipitate, or drop snow, on the downwind shores of the lakes. Large differences between the air and water temperatures in combination with a long fetch of ice-free lake surface can produce more intense snowfall. Grand Rapids, MI reported more than 14 inches of snow while Buffalo, NY reported 21 inches associated with this cold air outbreak induced lake effect snow.

NOAA National Centers for Environmental Information, State of the Climate: Monthly National Snow and Ice Report for January 2019, published online February 2019, retrieved on May 22, 2022 from https://www.ncei.noaa.gov/access/monitoring/monthly-report/snow/201901.