Thirty-nine percent of the contiguous U.S. (CONUS) was covered by snow at the beginning of January according to NOAA's National Snow Analysis. Snow blanketed many of the western U.S. mountain ranges, northern Plains, Great Lakes and New England. A cold front traversed the central Plains, Great Lakes and eastern U.S. from January 2-4, bringing the CONUS snowcover to 50.5 percent on the 3rd — the maximum extent for the month. On January 13-18, another cold front traversed the central and eastern U.S. and saw snow accumulate across portions of the Midwest and from the southern Appalachians into the Northeast. Maximum CONUS snowcover during this event occurred on the 17th with 43.7 percent coverage. Portions of New York state reported 18-24 inches of snow with this event, which was classified as a Category 2 storm across the Southeast Region, considered "Significant", per the Regional Snowfall Index (RSI), and a Category 1, "Notable", storm for both the Ohio Valley and Northeast regions. A coastal Carolinas ice storm occurred on January 20-21 with ice accumulations near Charleston leading to hazardous travel conditions and power outages. Near-record snowfall was reported across portions of Colorado and Kansas on January 25 with up to 27 inches of snow reported at Mt. Sunflower, Kansas — just 3 inches shy of the state 24-hour record. A type of nor'easter known as a bomb cyclone, or a rapidly intensifying low pressure system, developed over the Atlantic Ocean along the East Coast on January 28-30 and brought 1-2 feet of snow and blizzard conditions along the coastline from Delaware to Maine. Approximately 39 percent of the CONUS was blanketed in snow on the 29th. This event was classified as a Category 1 snowstorm on the RSI scale. Boston measured 23.6 inches of snow and tied its greatest 1-day snowfall total. This low pressure system intensified at nearly double the rate of a classic bomb cyclone, dropping 35 millibars in an 18-hour period. At least 100,000 people were without power during this storm. By the end of the month, snowcover waned to approximately 35 percent of the CONUS, ending a very active winter-weather month across the U.S. 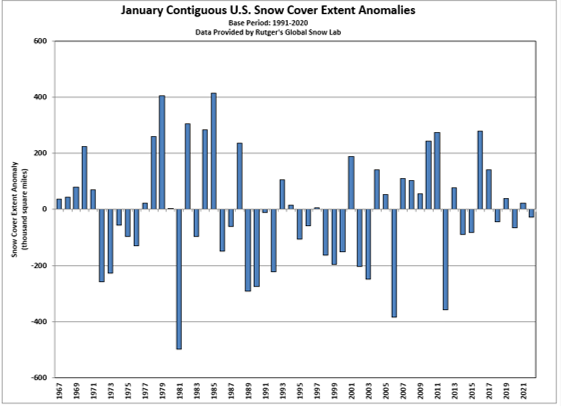 According to NOAA data analyzed by the Rutgers Global Snow Lab, the January U.S. snow cover extent was approximately 1.3 million square miles, 27,000 square miles below the 1991-2020 average. This was the 26th smallest value in the 56-year satellite record. Above-average snow cover was observed across parts of the West, northern Plains, Midwest, Great Lakes and from the Appalachians to the Northeast. Below-average snow cover was observed over much of the central and southern Plains as well as portions of the West. 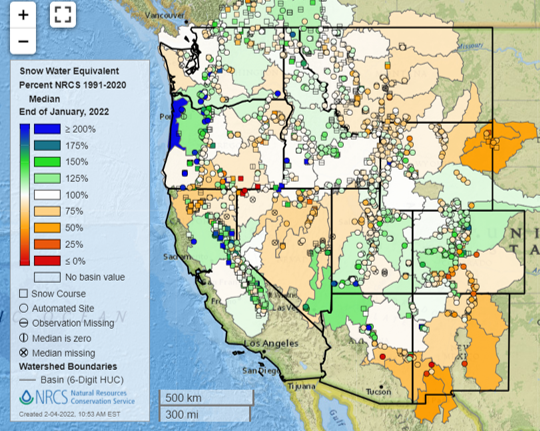 Melting of winter and spring mountain snowpack provides a crucial summer water source across much of the western United States. The total annual water budget for agriculture and human use in the mountainous West is highly dependent on the amount of snow melt that will occur in spring and is proportional to the amount of snow on the ground, which can be approximated by a measure of the snow water equivalent (SWE). On December 31, SWE values were at or above 100 percent across most of the region with portions of the Cascades, Sierras and Great Basin reporting SWE values in excess of 200 percent of median. Portions of the northern Cascades, northern Rockies and front range of the central and southern Rocky Mountains had SWE values 75 percent of median or less at the end of December. By the end of January, SWE values dropped significantly across the western U.S. with near-record low precipitation for the month across California, Nevada and Utah. SWE values were near- to above-normal across parts of the Cascades, Bitterroots, Sierra Nevada range and portions of the central Rockies. Below-average SWE values were present across much of the Great Basin as well as the northern and southern Rockies.