February began with approximatly 34 percent of the contiguous U.S. (CONUS) covered by snow according to NOAA's National Snow Analysis. Snow blanketed many of the western mountain locations as well as from North Dakota to the Great Lakes and from the Appalachian Mountains to New England. A massive winter storm stretched from Texas to Maine during the first week of February and brought heavy snow, freezing rain, ice and bitter cold temperatures. Nearly 51 percent of the CONUS was covered in snow on the 4th — the maximum CONUS snow cover extent for the month. During the ensuing days, snow cover waned somewhat with several punctuated snow events on the 18th across the Midwest and from February 22-24 across the northern Plains and Midwest as well as from Arizona to Missouri. On February 18, a powerful line of convective snow, associated with an Alberta Clipper-type storm, traversed the Midwest with wind gusts topping 70 mph across portions of Wisconsin and Illinois. The National Weather Service issued snow squall warnings, as brief blizzard conditions accompanied the snowfall. Arctic air plunged into the central CONUS during the last week of February. Record cold daily temperatures were felt as far south as northern Mexico and wind chill values dipped below zero from Washington to Wisconsin and into the southern Plains. Snow and ice fell from the northern Plains to the Midwest on the 22nd while sleet, freezing rain and freezing drizzle impacted a broad region from Arizona to Texas and Missouri, closing schools, airports and interstates for a period of time on the 23rd and 24th. The month ended with approximtely 34 percent of the CONUS covered in snow including much of the western mountains and from the northern Plains to the Northeast. 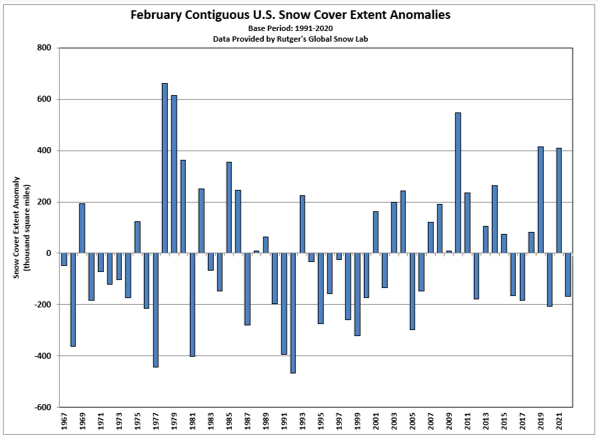 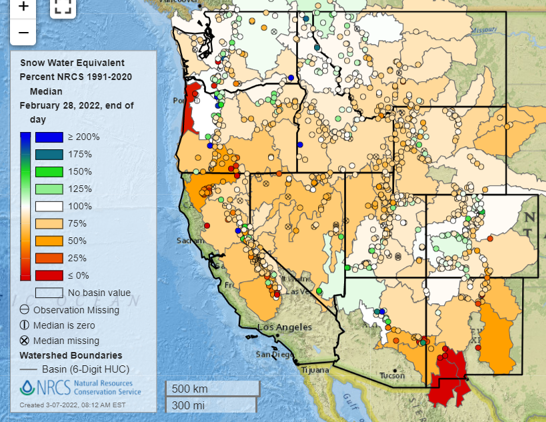 Melting of winter and spring mountain snowpack provides a crucial summer water source across much of the western United States. The total annual water budget for agriculture and human use in the mountainous West is highly dependent on the amount of snow melt that will occur in spring and is proportional to the amount of snow on the ground, which can be approximated by a measure of the snow water equivalent (SWE). On January 31, SWE values were in general much lower across the western U.S. than what was observed at the beginning of the month and resulted from near-record low precipitation received during January across California, Nevada and Utah. SWE values were near- to above-normal across parts of the Cascades, Bitterroots, Sierra Nevada range and portions of the central Rockies. Below-average SWE values were present across much of the Great Basin as well as the northern and southern Rockies. By the end of February, SWE values across much of the West were less than 75 percent of median. Portions of the Cascades, Bitteroots and central Rockies has SWE values that were near the median value at the end of February.