Warm and dry conditions continue in August; Isaac brings heavy rain to Gulf Coast and some drought relief to the Midwest

The average temperature for the contiguous U.S. during August was 74.4°F, 1.6°F above the long term average, marking the 16th warmest August on record. The warmer than average August, in combination with the hottest July and a warmer than average June, contributed to the third hottest summer on record since recordkeeping began in 1895.

The August nationally-averaged precipitation total of 2.59 inches was near the long-term average. The Southwest and Southeast were wetter than average and the Northwest and the Northern Plains were drier than average. As of August 28th, according to the U.S. Drought Monitor, nearly 63% of the contiguous U.S. continued to experience drought conditions.

Significant climate events for August and Summer 2012. Click image to enlarge, or click here for the National Overview.

Note: The August Monthly Climate Report for the United States has several pages of supplemental information and data regarding some of the exceptional events from the month and season. 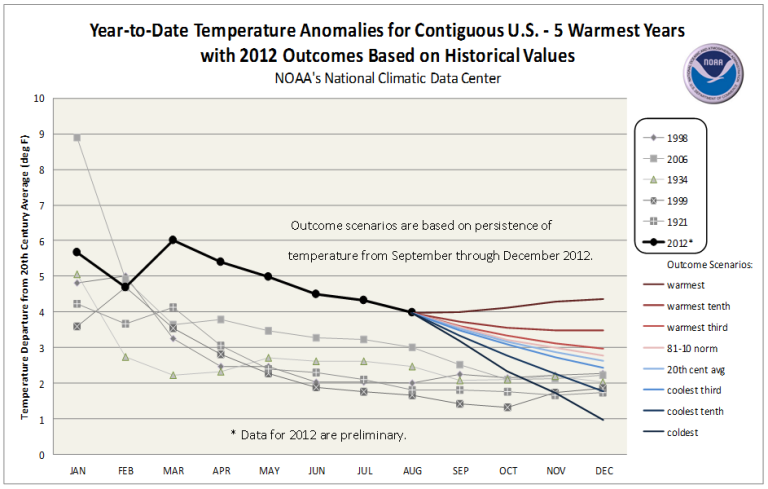 This graphic shows the calendar-year temperature outcomes based upon observed January-through-August temperatures, and eight historical scenarios for September-through-December. Click here for more information.