The dominant pattern during November 2020 was the positive phase of the Arctic Oscillation (AO). It was associated with an enhanced trough in northern Canada and anomalous ridges throughout the midlatitudes. A series of broad ridges over the conterminous U.S. brought warm and dry anomalies to much of the country during most of November.

The most notable departure from this positive AO pattern came during November 8-14. A weak negative phase of the Pacific/North American pattern (PNA) brought a trough to the western U.S. This trough was associated with the only notable cool anomalies during the entire month. Farther east, moisture from Hurricane Eta brought heavy rain from Florida to the Mid-Atlantic Coast, which drove the above normal November precipitation in that region. 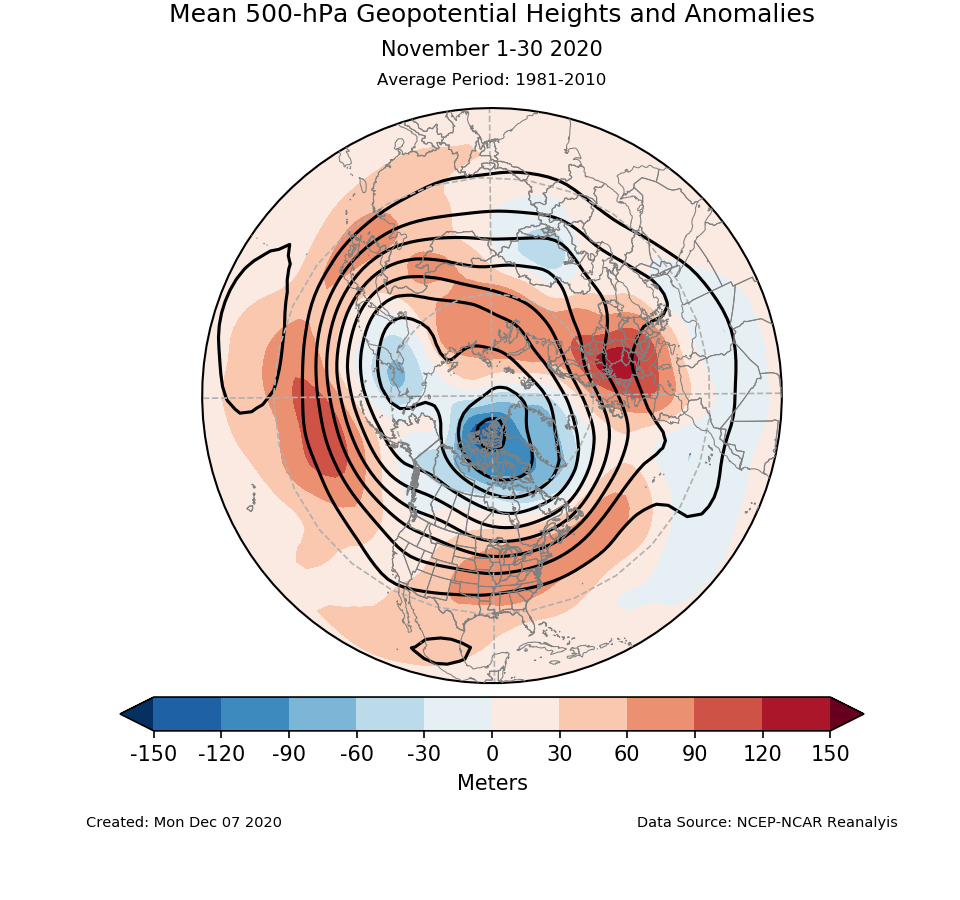 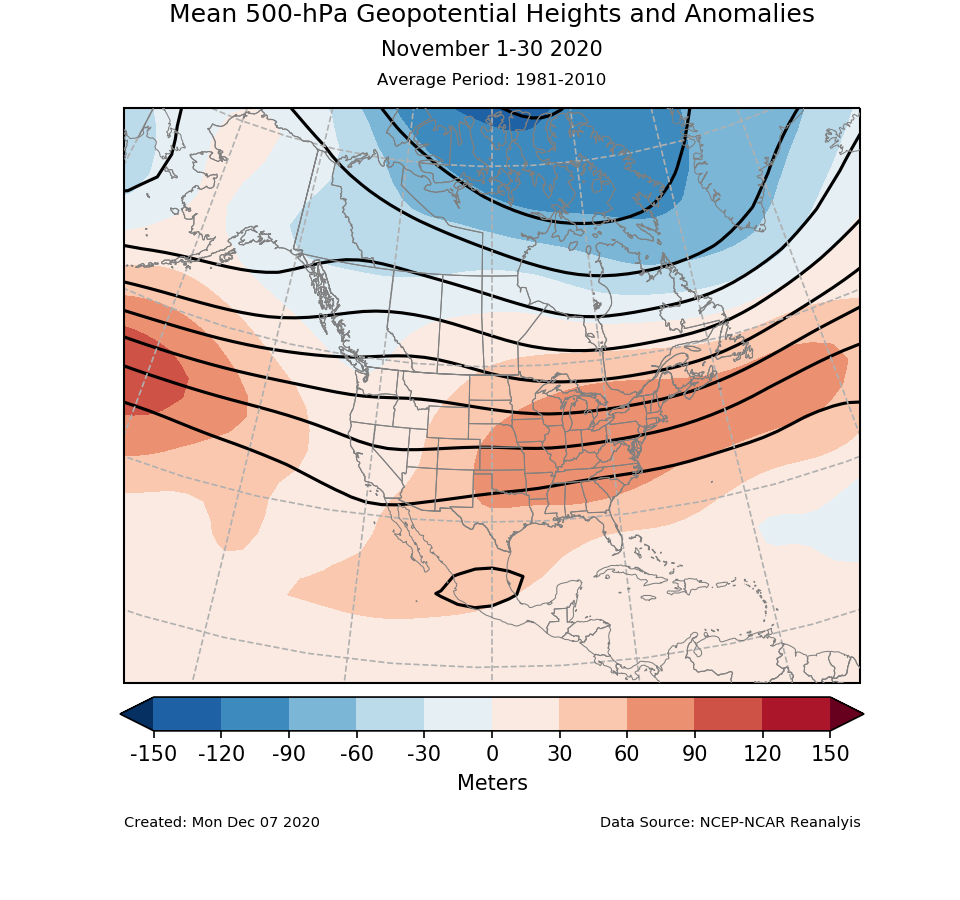 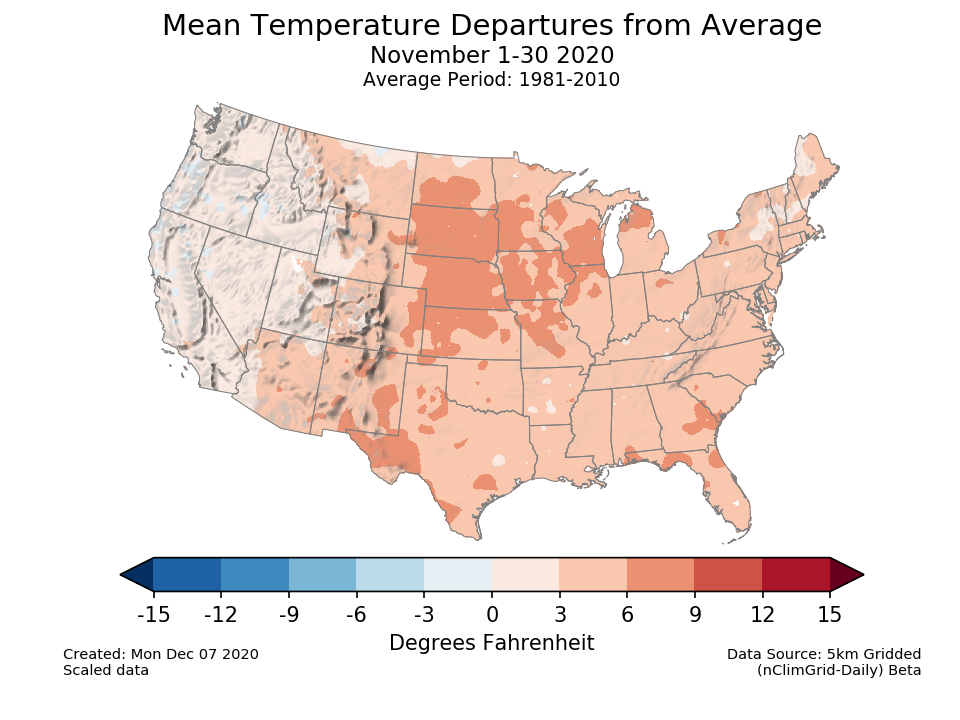 Temperature anomalies (departure from normal) for the CONUS for November 2020 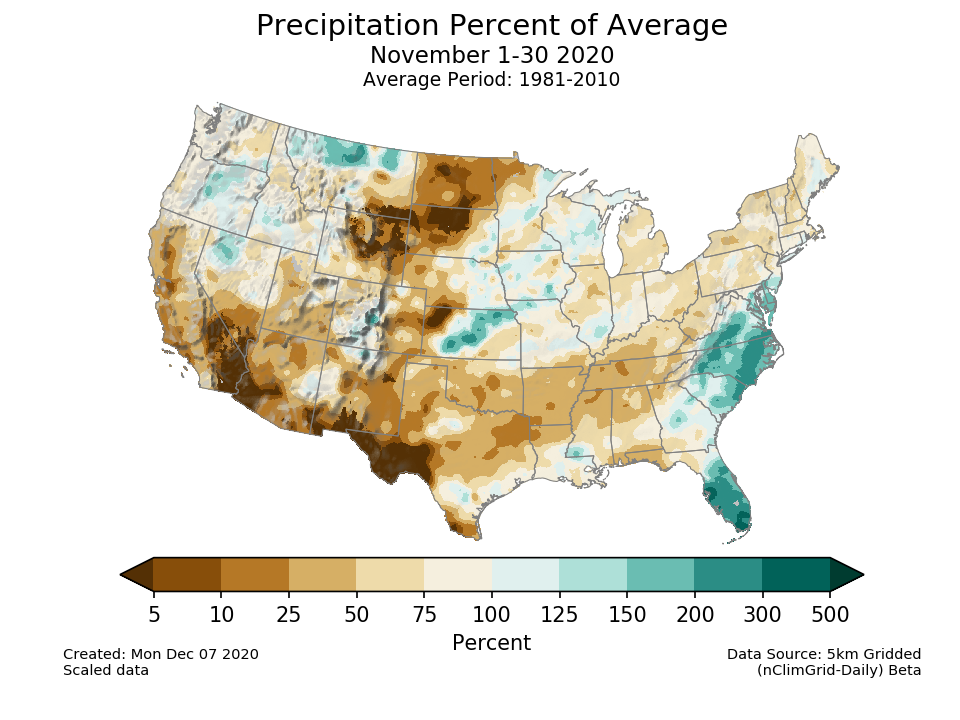 Precipitation anomalies (percent of normal) for the CONUS for November 2020 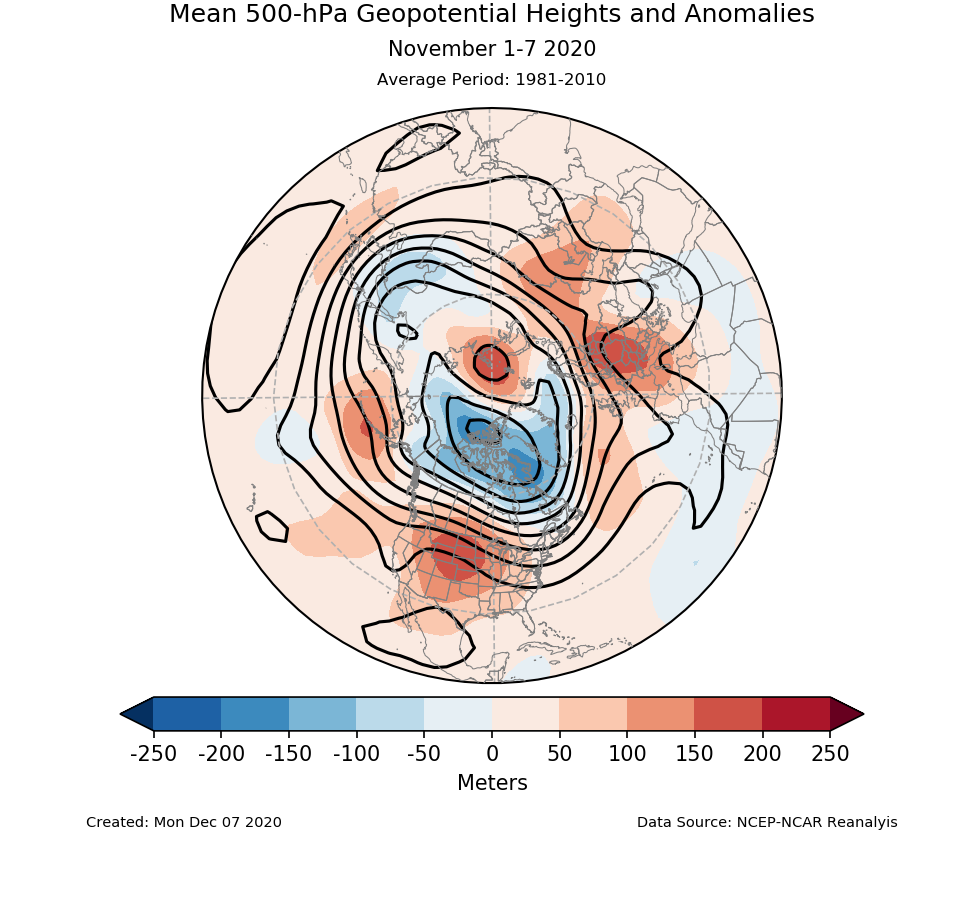 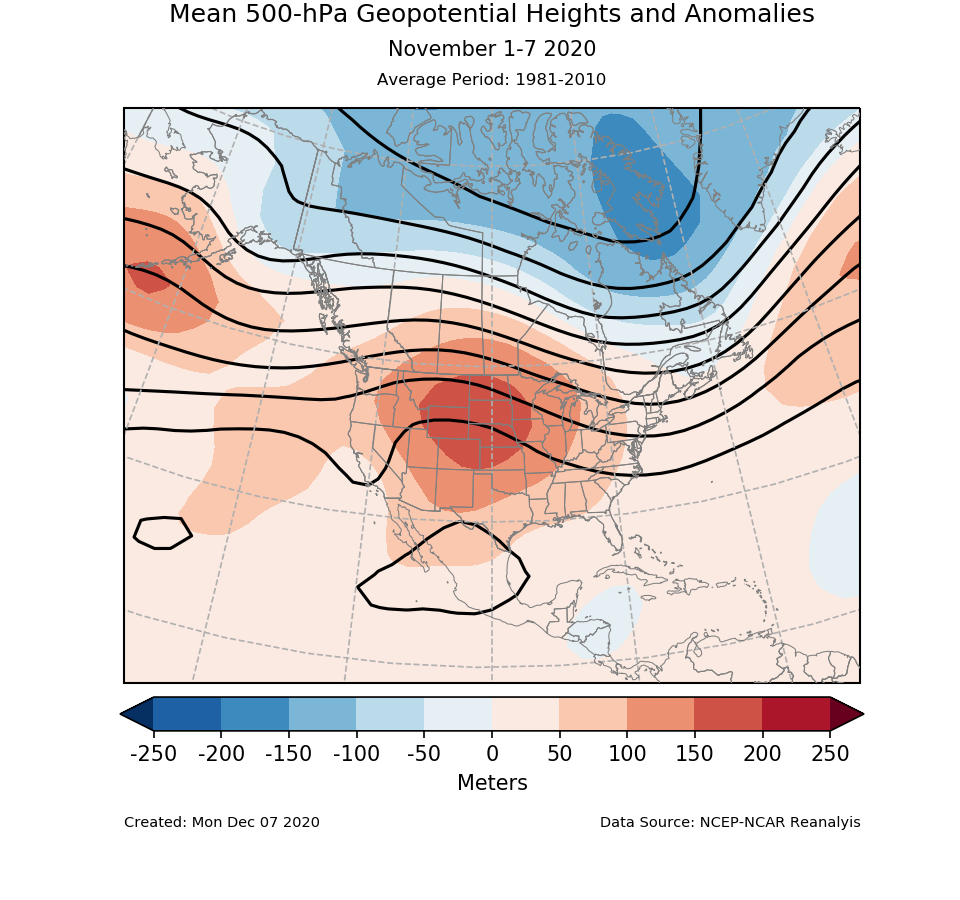 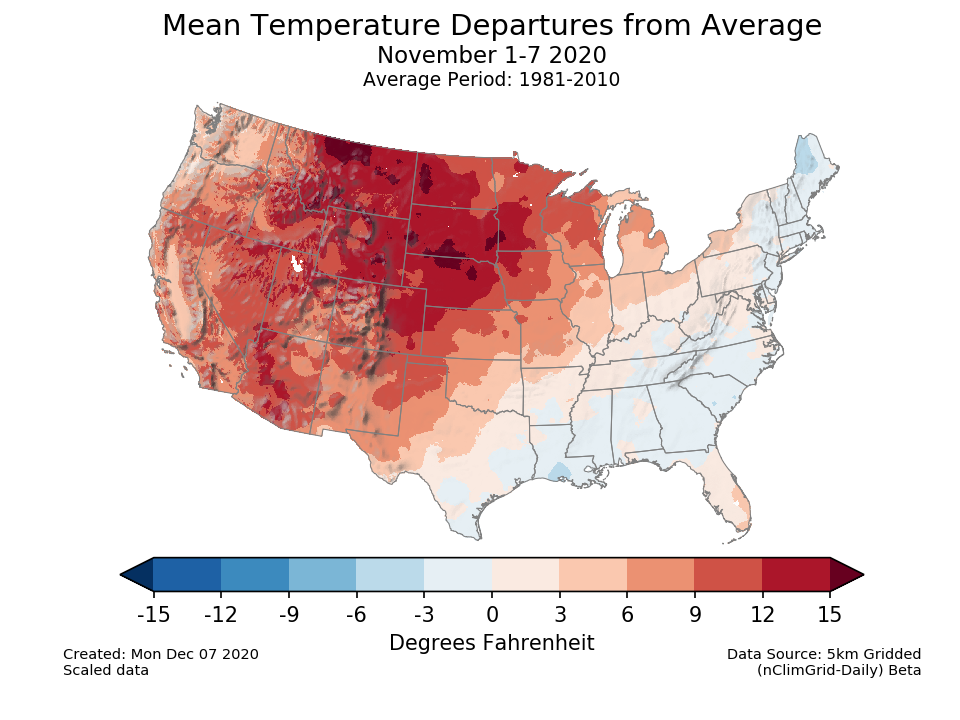 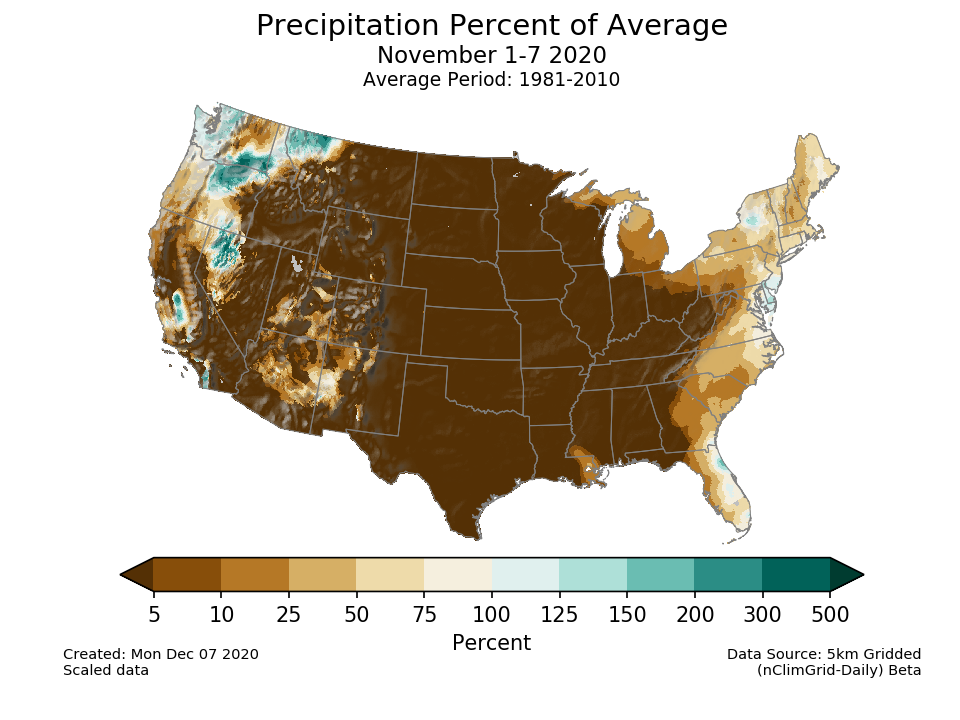 An anomalously strong upper-level ridge has dominated the weather of the Southwest U.S. since mid-April. That ridge was still in place in early November. It was centered near the Northern Plains and was associated with warmer than normal temperatures across the western two-thirds of the country. It also suppressed precipitation over the vast majority of the conterminous U.S. 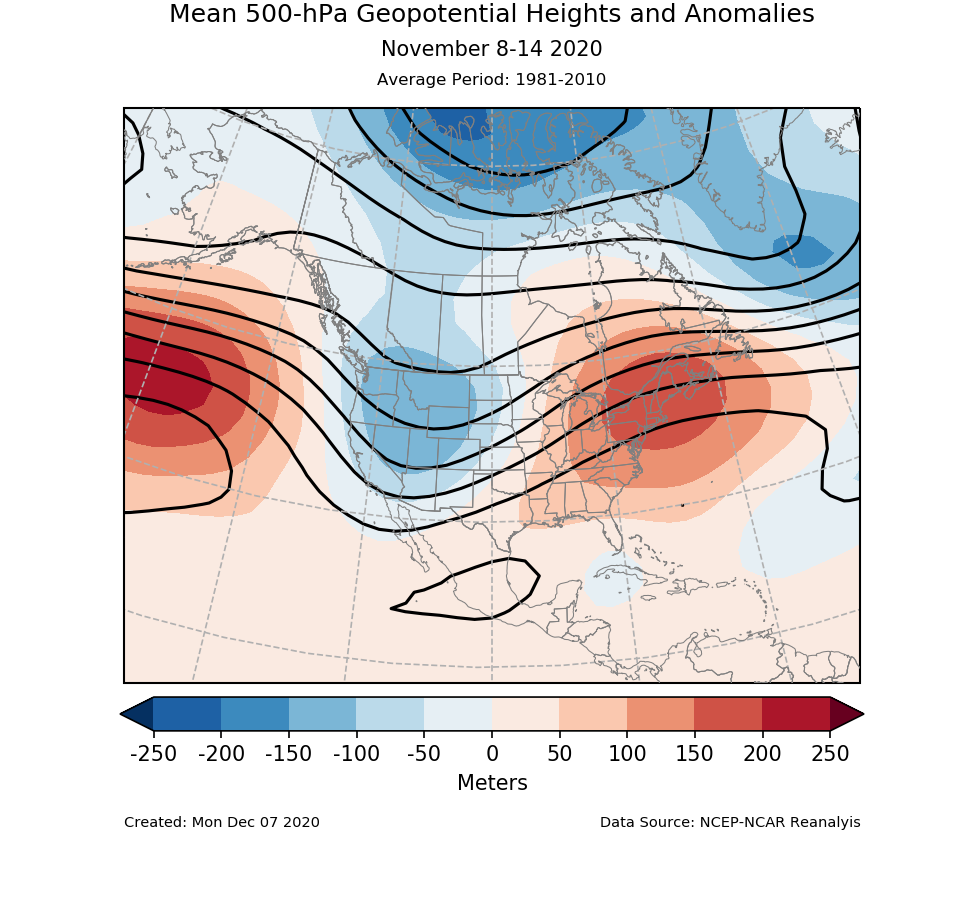 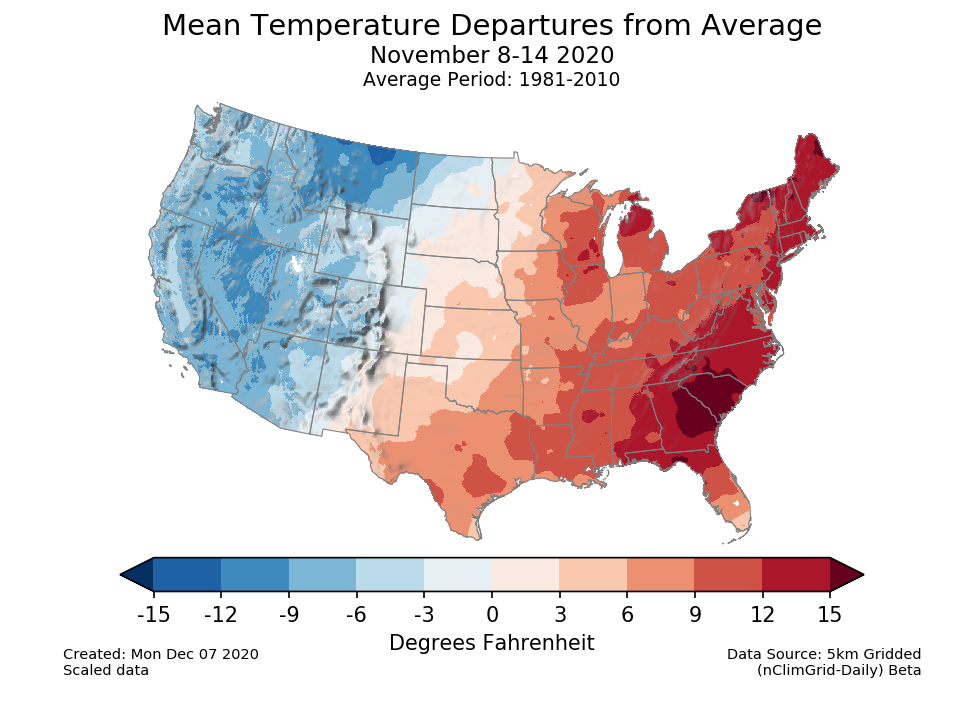 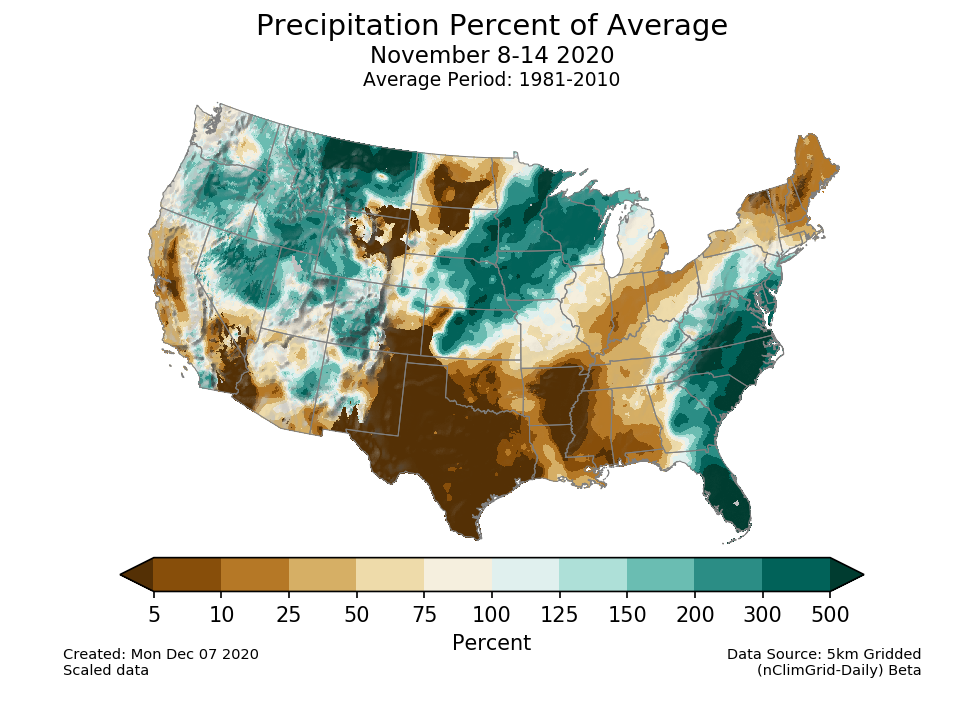 The ridge moved to the eastern U.S. during the second week of November, as a trough developed over the western U.S. in association with a weak negative PNA. The trough brought cool anomalies to the western half of the country, and these would be the only notable cool anomalies anywhere during the entire month. It also brought enhanced precipitation to much of the Northern Rockies and Northern Plains.

On November 8, Hurricane Eta made landfall in Lower Matecumbe Key, FL as a tropical storm. This landfall brought the total number of U.S. landfalling named storms to 12 -- a record. Florida usually receives more landfalling storms than any other state, so it is particularly remarkable that Eta was the first named storm to make landfall within the state in 2020. After passing through the Florida Keys, Eta briefly regained hurricane status over the eastern Gulf of Mexico before making another landfall in Central Florida. Moisture from Eta collided with a cold front to bring heavy rain from Florida to the Mid-Atlantic Coast, which was the primary driver of above-normal November precipitation for that region. 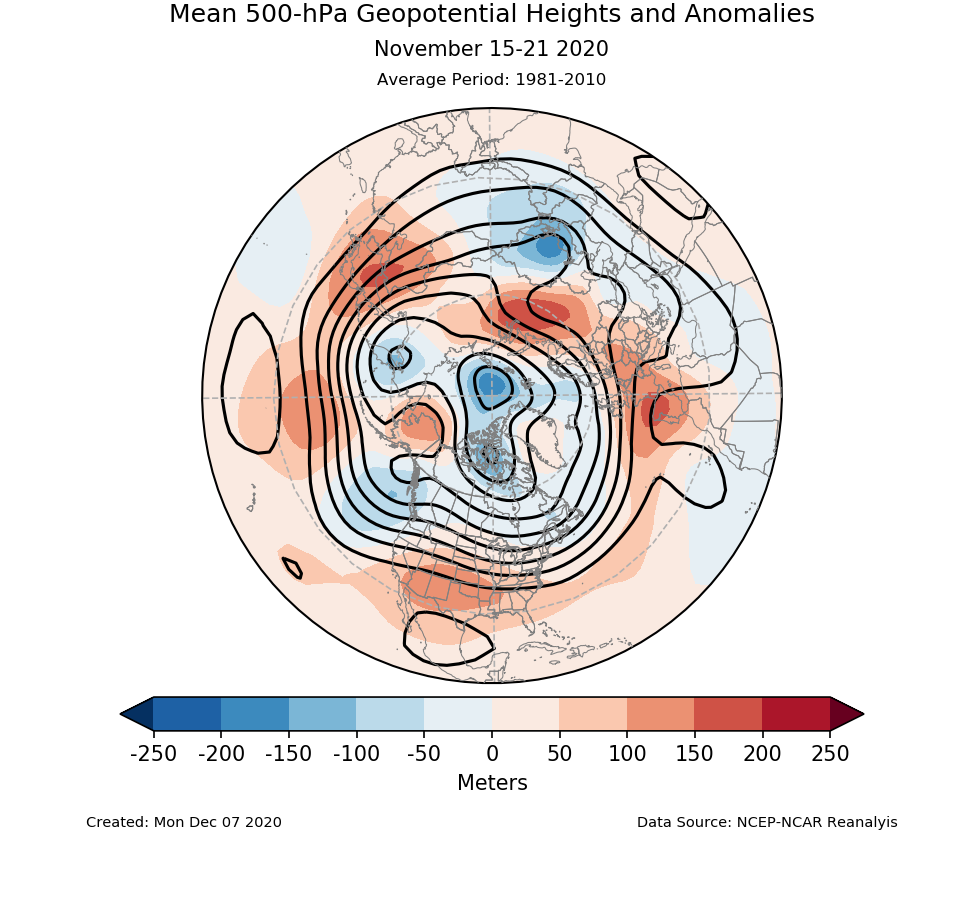 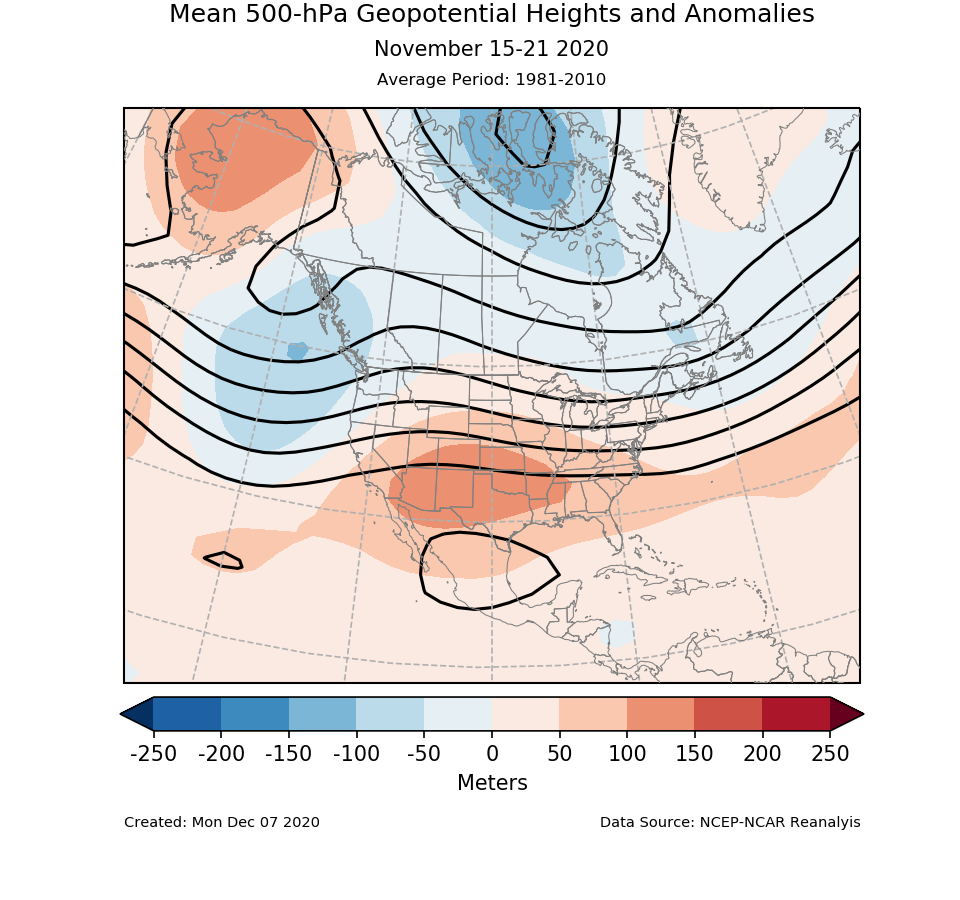 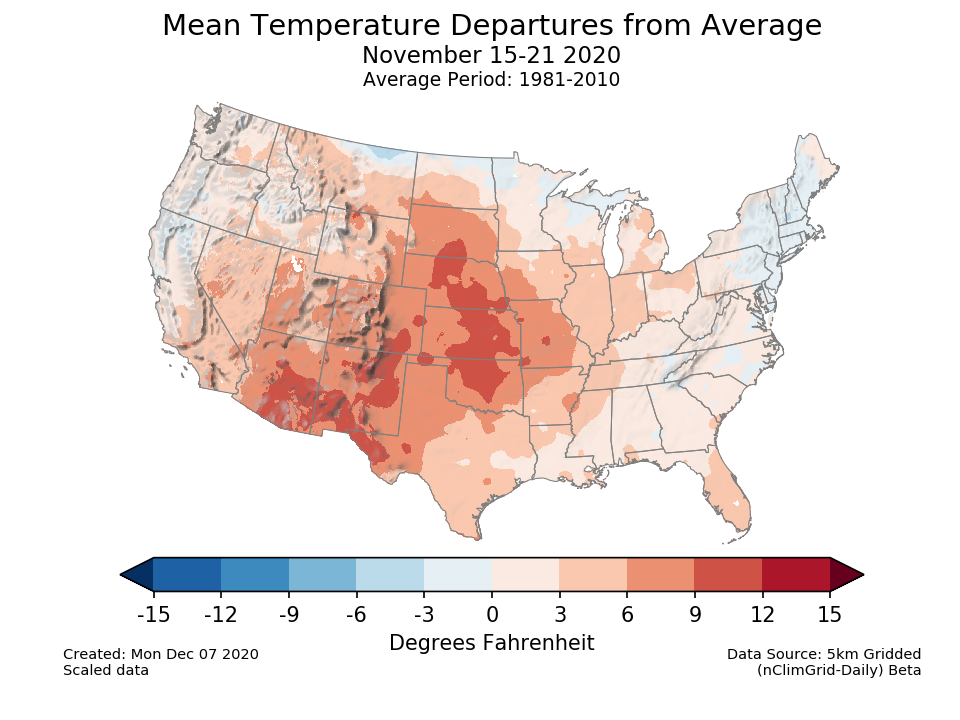 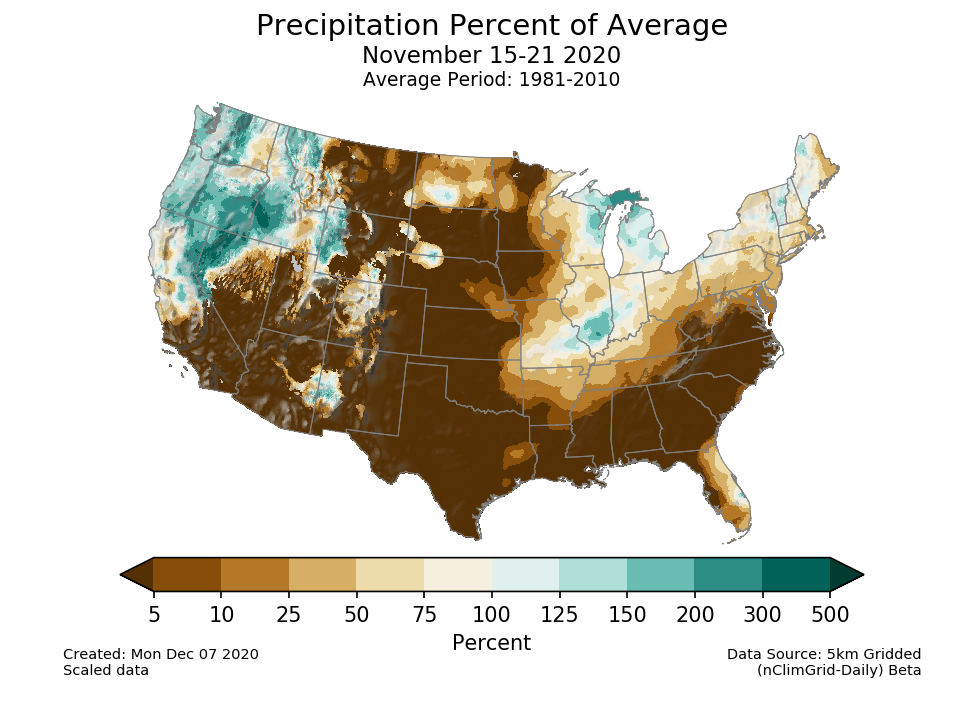 Beginning on November 15, the trough from the previous week moved eastward towards the North Atlantic. The associated powerful cold front brought widespread wind damage from Indiana to New England. In its wake, another broad ridge anchored over the Southwest dominated the U.S. circulation. It brought a return to warm and dry conditions for most of the country. Notably, Phoenix, AZ reached 92°F on November 17, breaking its record for the latest day in the year when the high temperature was at least 90°F. 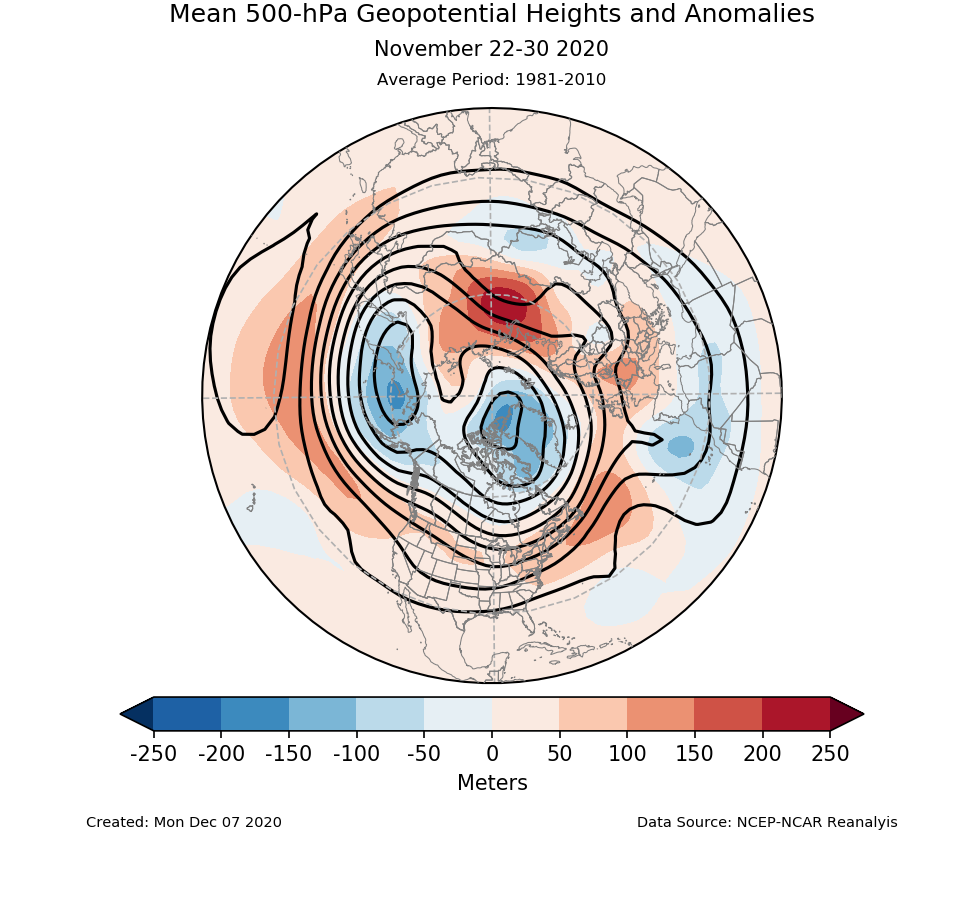 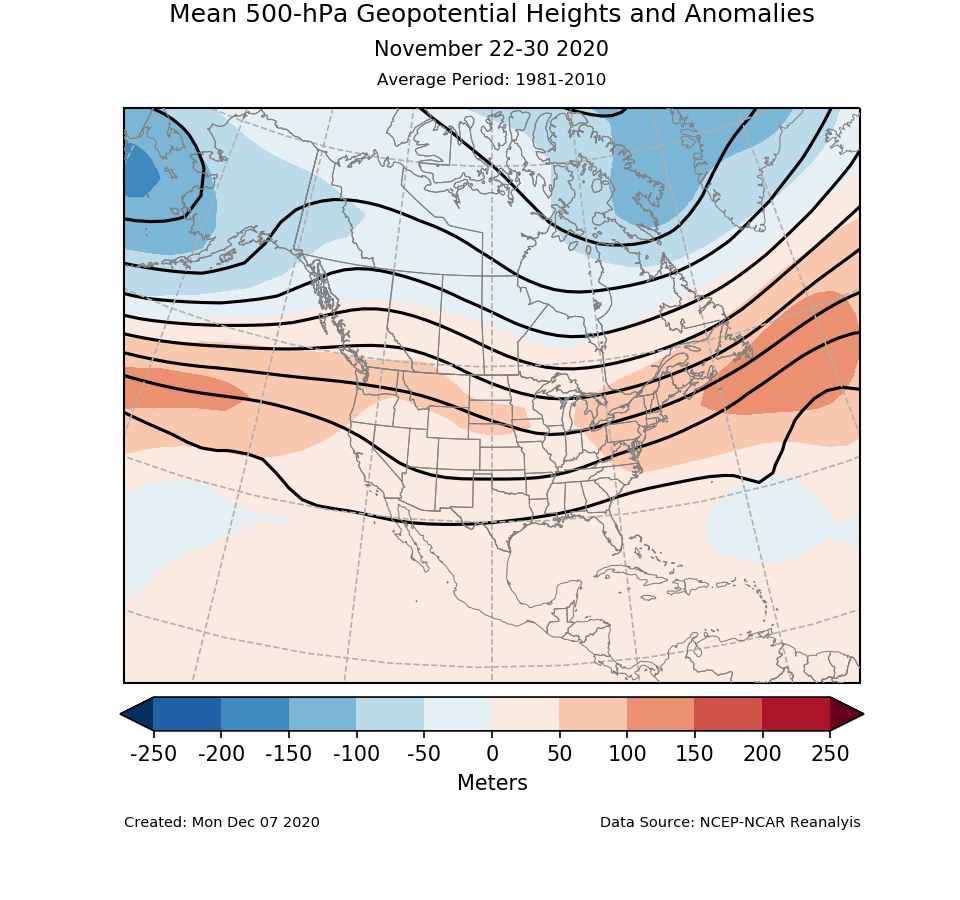 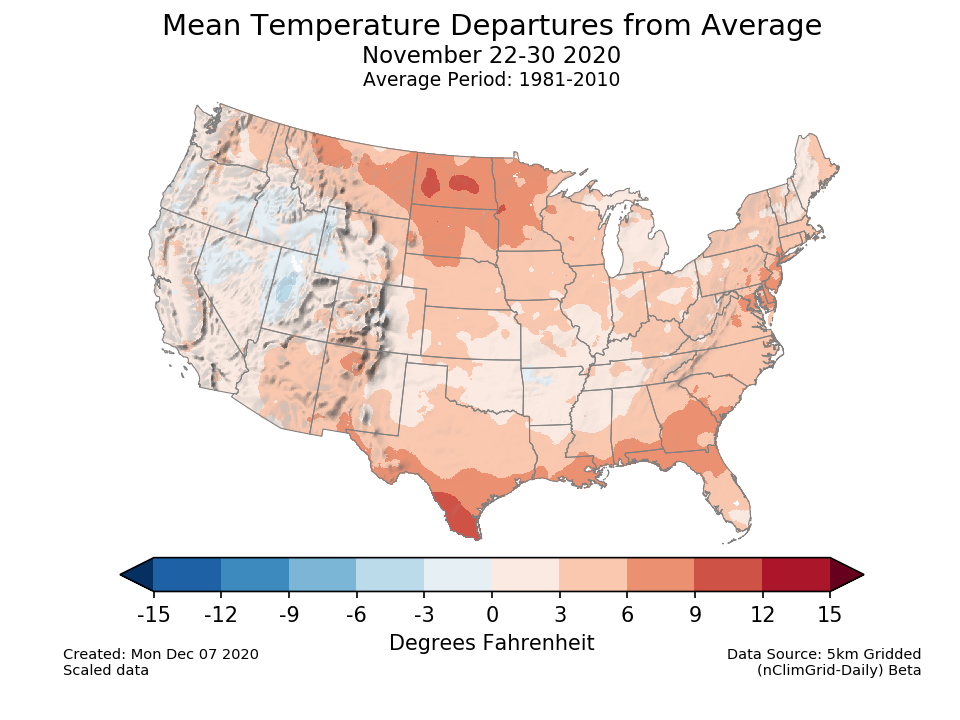 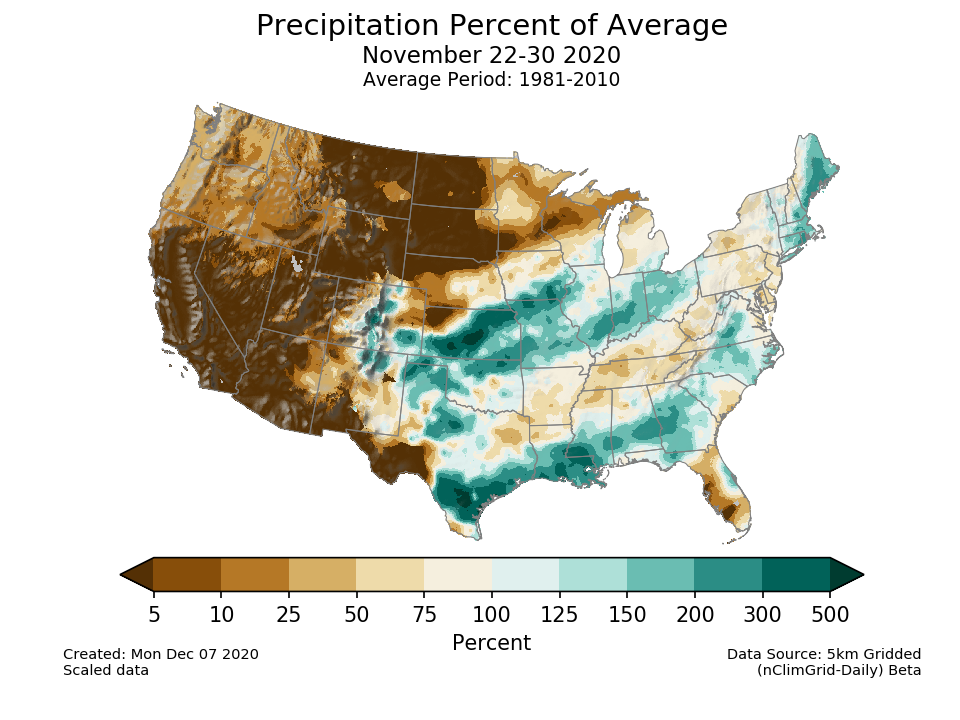 The final week November had a more meridional and propagating weather pattern. A series of disturbances in the subtropical jet brought precipitation to the South-Central U.S. Temperatures were generally above normal, particularly for the Northern Plains and the Gulf Coast. 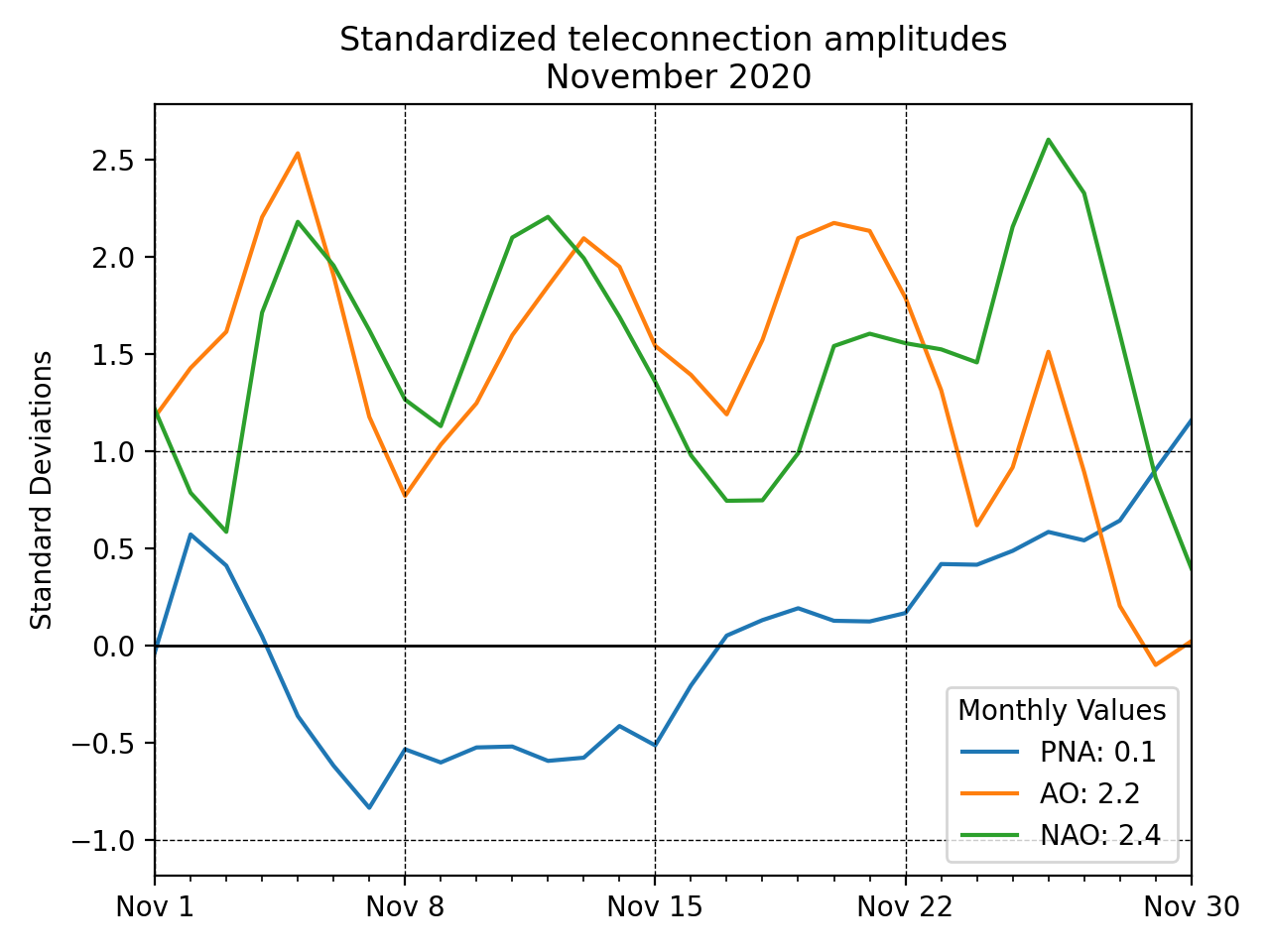 Time series of the PNA, AO, and NAO teleconnection indices for November 2020