The dominant pattern during December 2020 was the positive phase of the Pacific/North American pattern (PNA). The associated ridge over northwestern North America extended particularly far east and brought above normal temperatures to the Northern Plains. It also suppressed precipitation across the contiguous U.S. except for two nor'easters that brought heavy snow to the Northeast. The downstream trough also brought cooler than normal temperatures to the Southeast.

The Arctic Oscillation (AO) was also negative for most of December. It did not lead to the significant cold-air outbreaks that are typical for the negative AO. However, it did contribute to a more stationary and meridional circulation. It was also associated with a strong ridge that extended from the North Atlantic to Greenland and the North Pole. The southern periphery of this ridge contributed to the warm anomalies for New England. 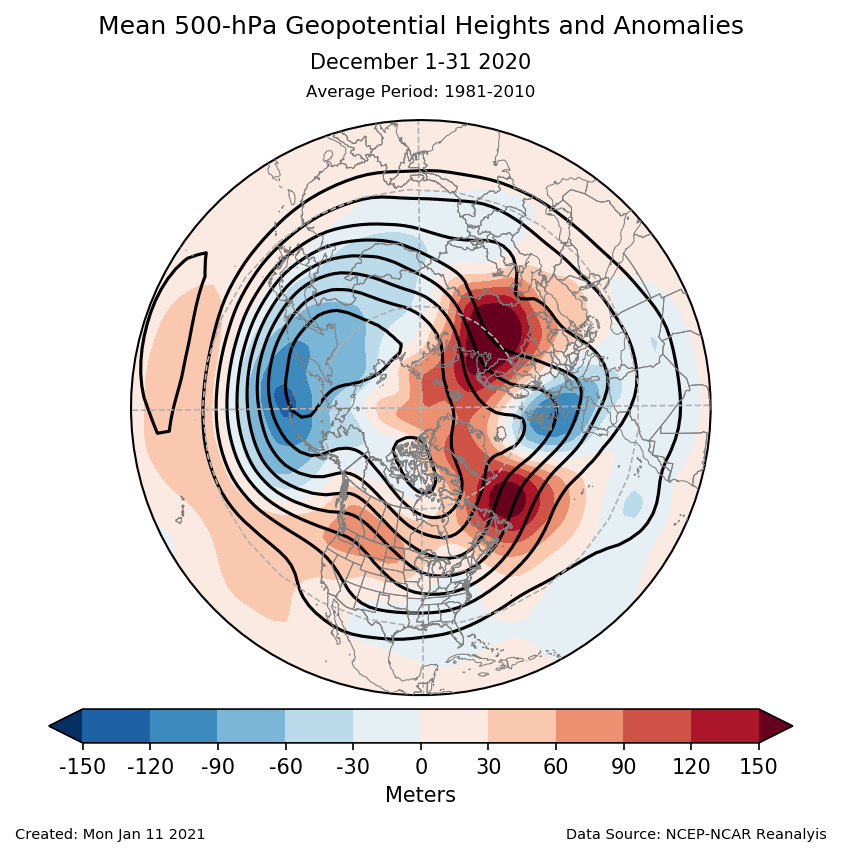 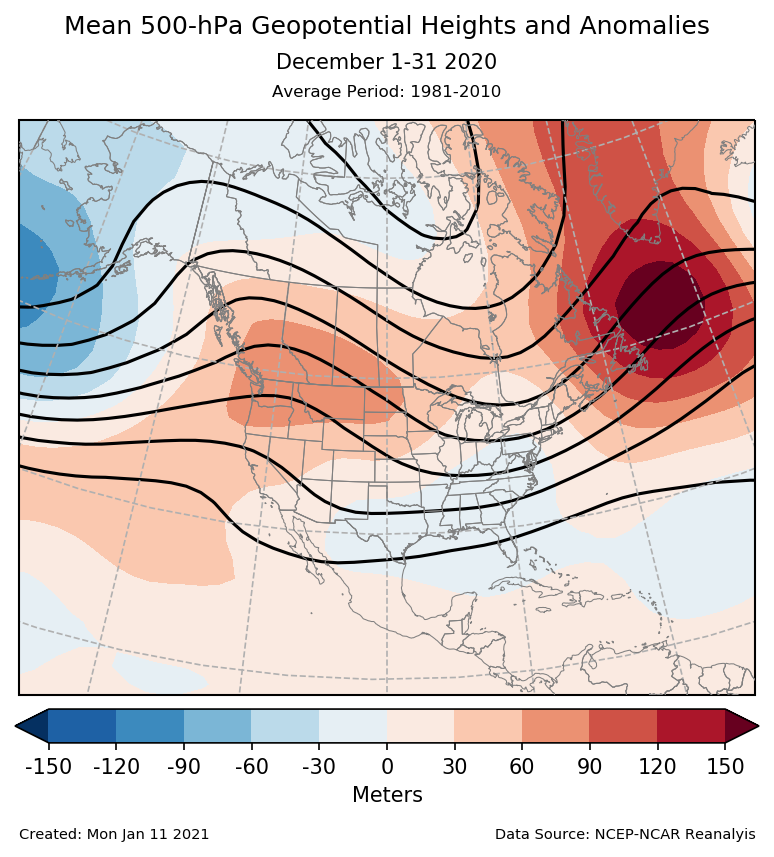 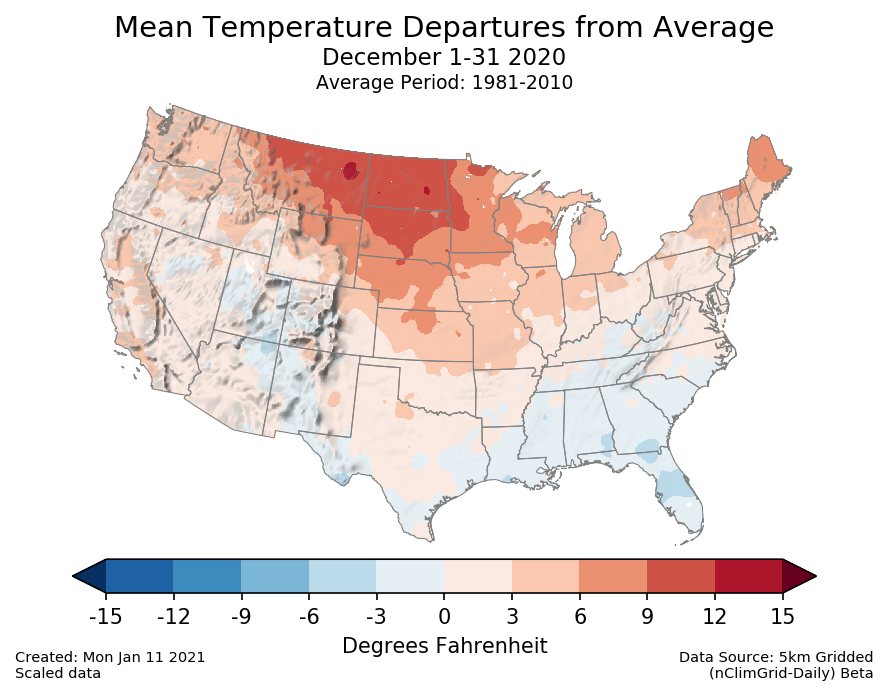 Temperature anomalies (departure from normal) for the CONUS for December 2020 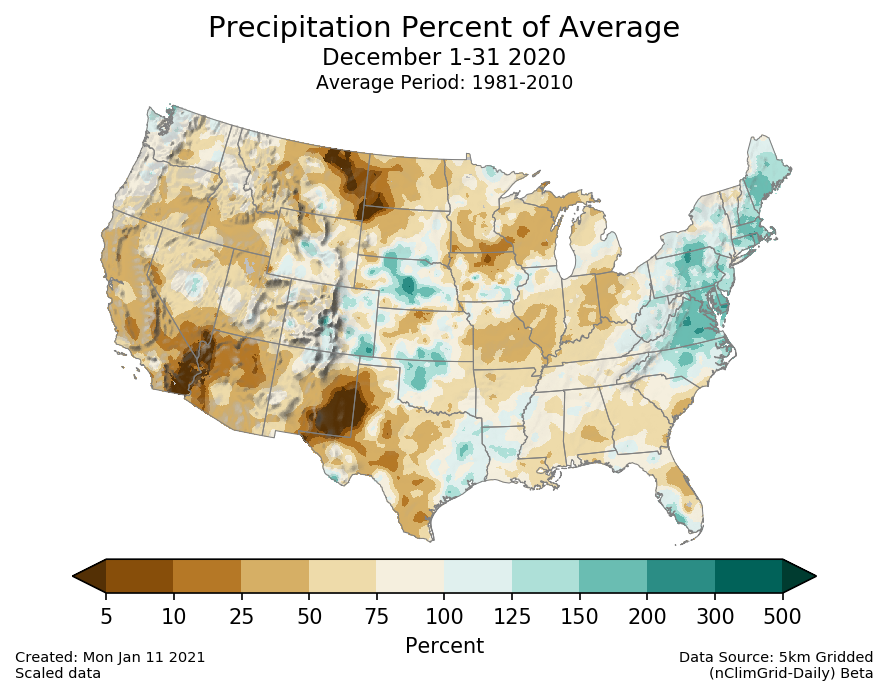 Precipitation anomalies (percent of normal) for the CONUS for December 2020 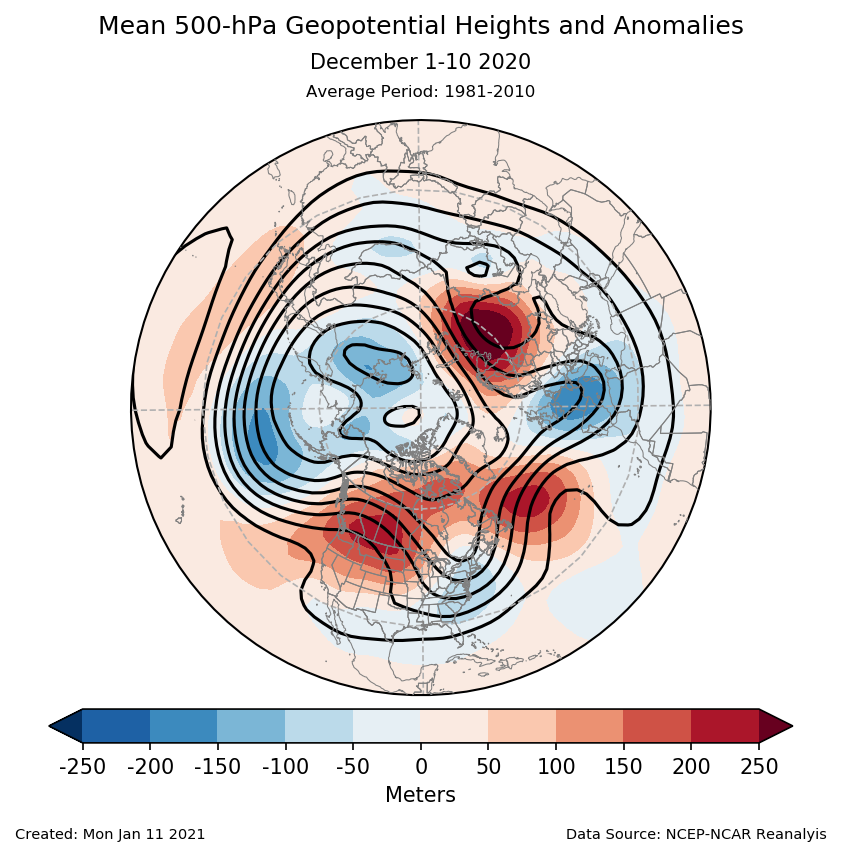 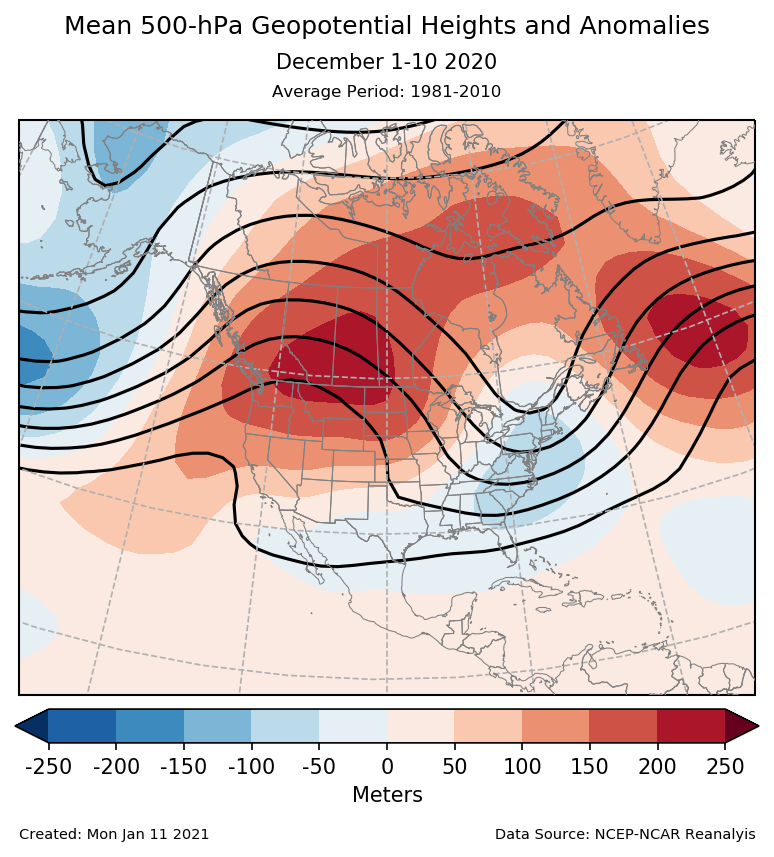 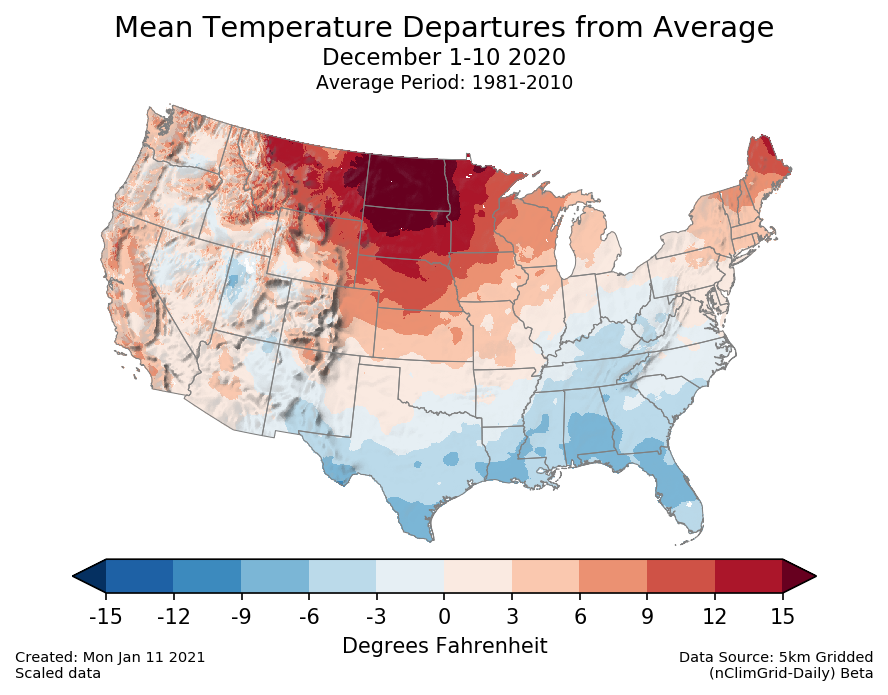 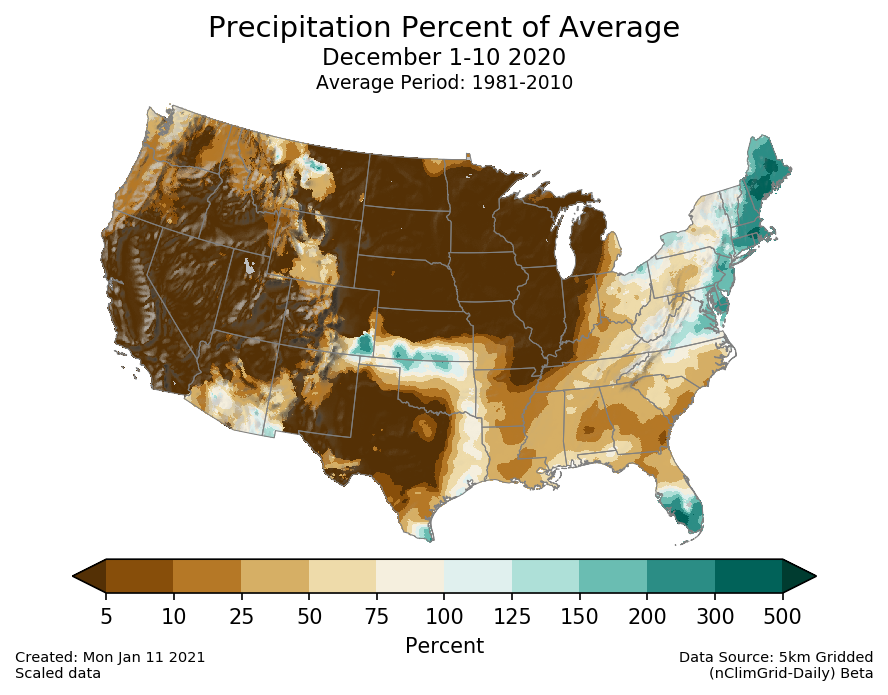 Early December was dominated by a strongly positive PNA event that produced the typical trough near the Aleutians, ridge near the Pacific Northwest, and trough along the East Coast. The ridge over the western U.S. has been a persistent feature bringing dry conditions to the Southwest since mid-April. The ridge also brought much above normal temperatures to the Northern Plains, while the trough was associated with cooler temperatures for the Southeast. The only significant precipitation during this period was associated with a nor'easter that affected New England December 5-6. 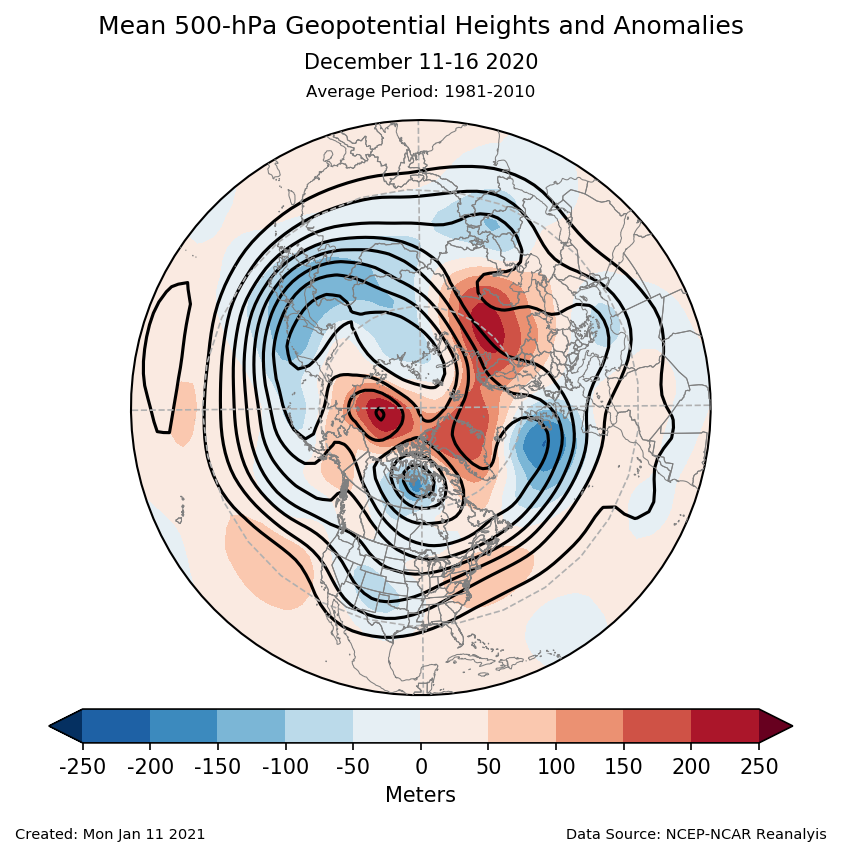 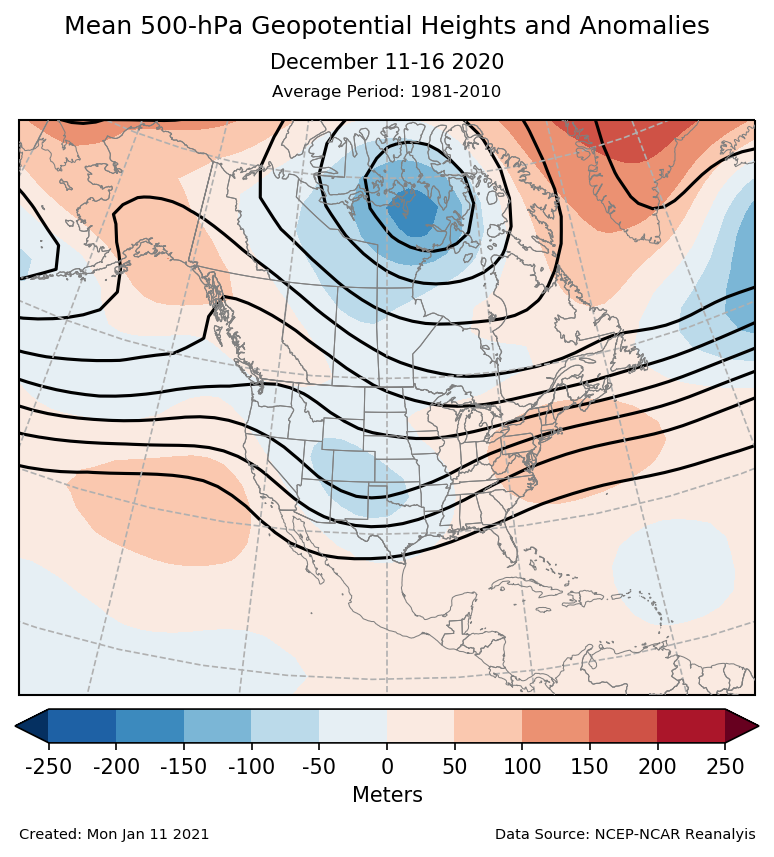 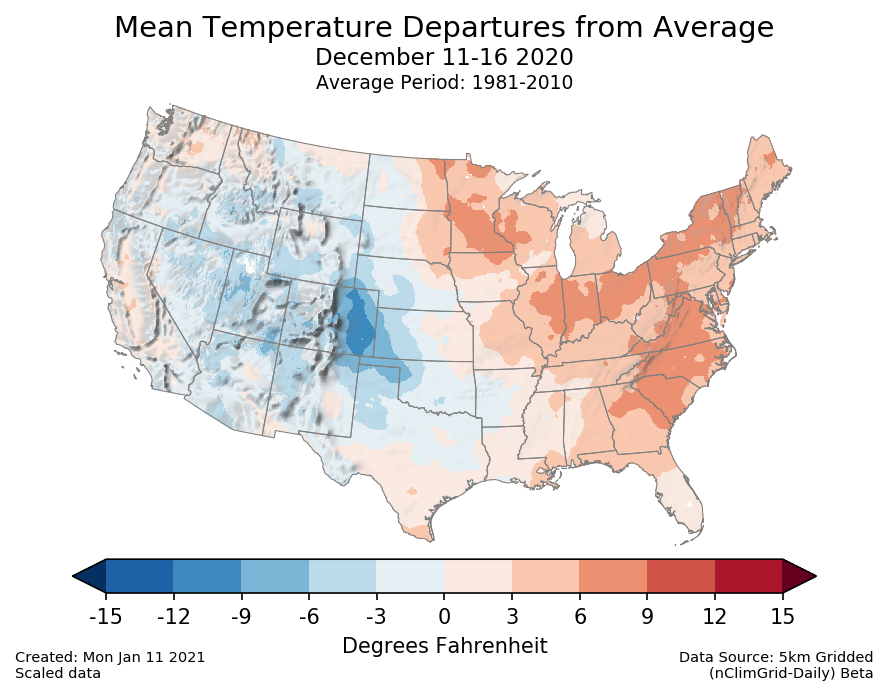 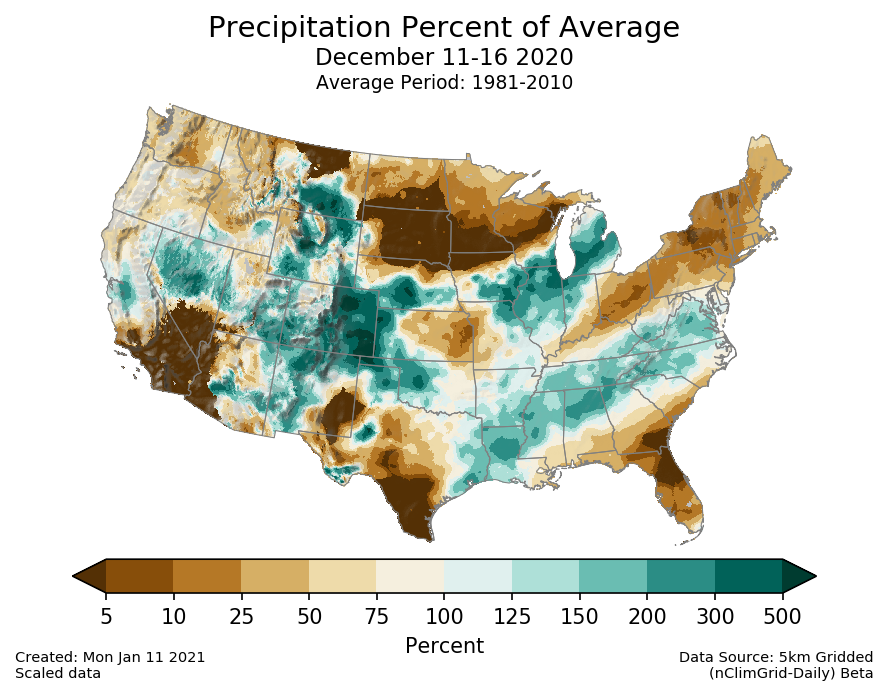 The positive PNA weakened towards the middle of December. Meanwhile, the AO became strongly negative. This combination brought a trough and cold-air outbreak to the eastern Rockies and Great Plains. It also brought a more active weather pattern to the eastern U.S. with a series of low pressure systems bringing snow and rain to the lower Midwest and the Southeast. 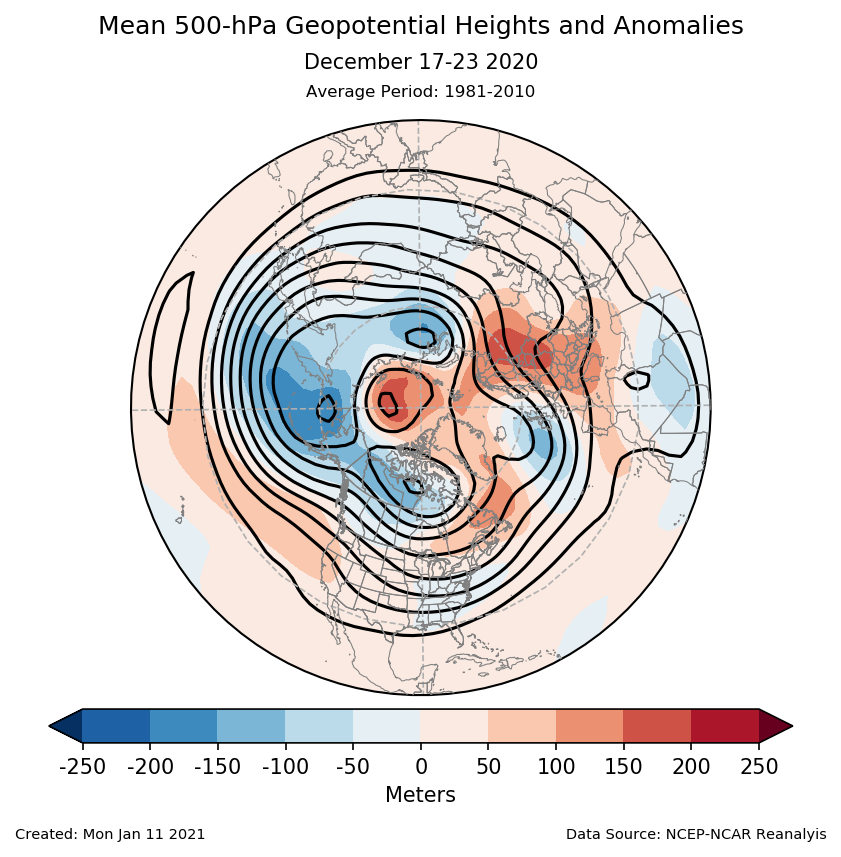 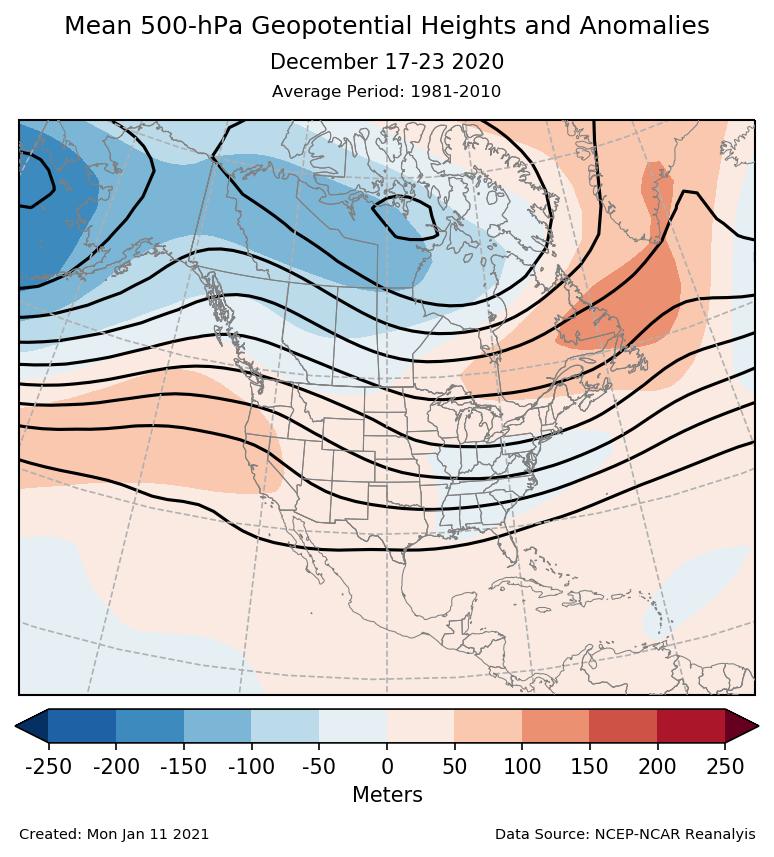 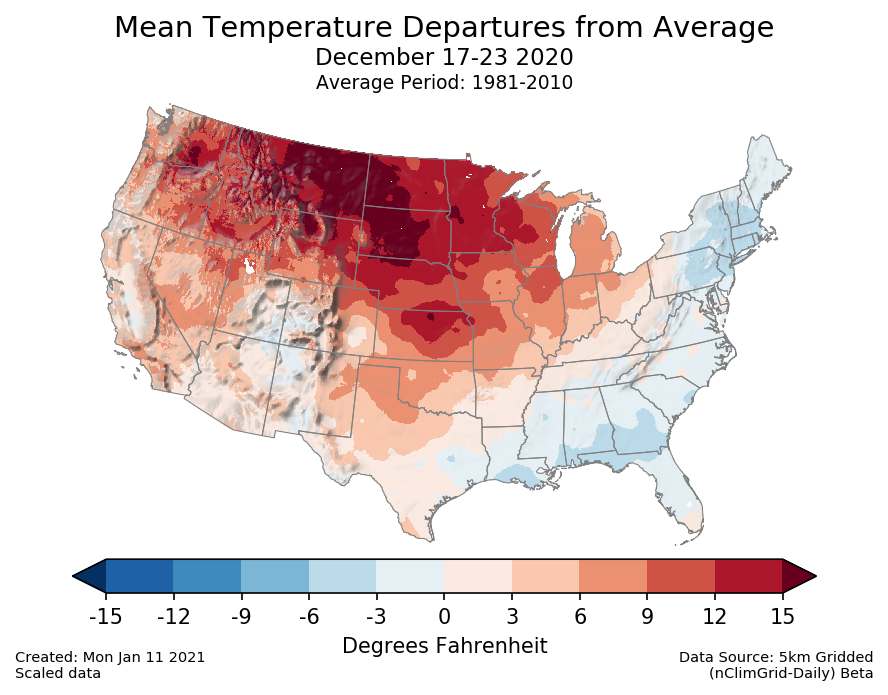 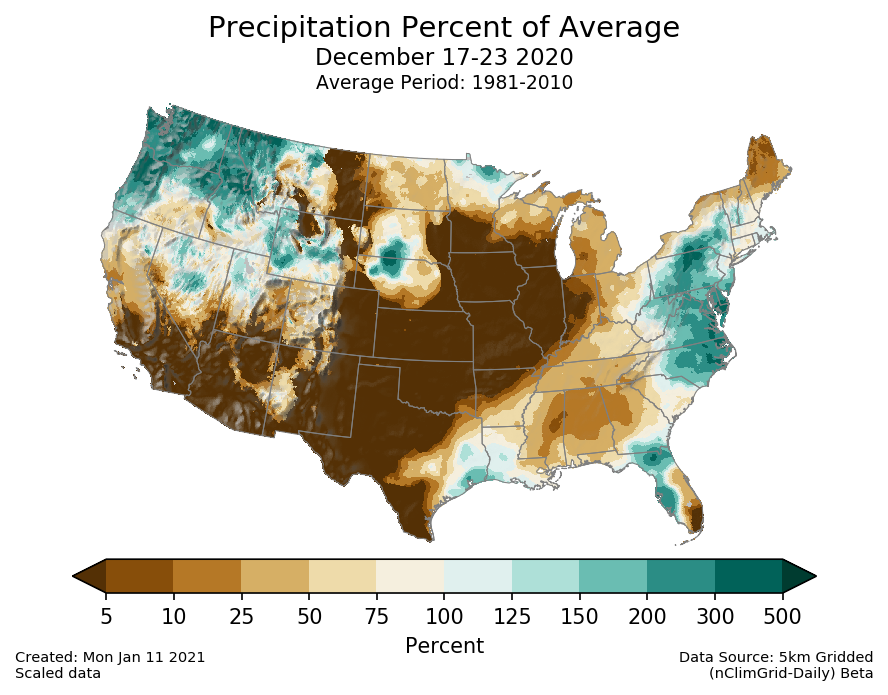 The trough moved eastward from the Great Plains to the East Coast December 16-17. It spawned a powerful nor'easter that brought one to two feet of snow from central Pennsylvania to southern Maine. A ridge developed east of the Rockies in its wake and brought unusually warm temperatures to the Northern Plains.

Farther west, the trough with the positive PNA extended from the Aleutians to the Hudson Bay. Combined with an enhanced ridge over the subtropical Pacific enhanced the Pacific jet, consistent with a positive East Pacific Oscillation (EPO). The onshore flow brought enhanced moisture to the Pacific Northwest. The precipitation extended as far south as Las Vegas, which ended a record 240 consecutive dry days there. 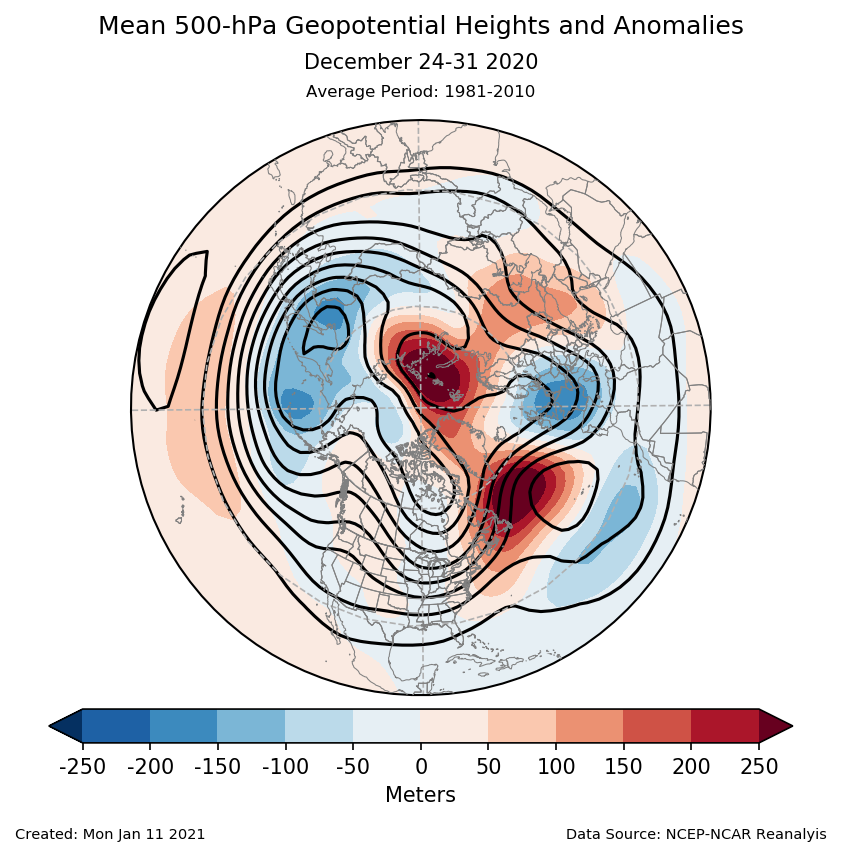 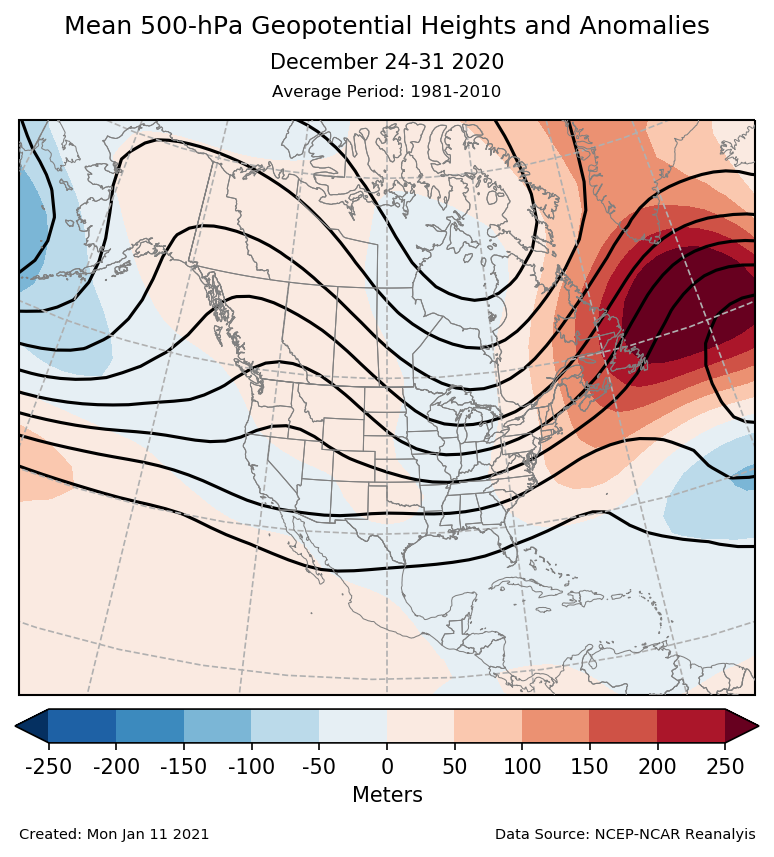 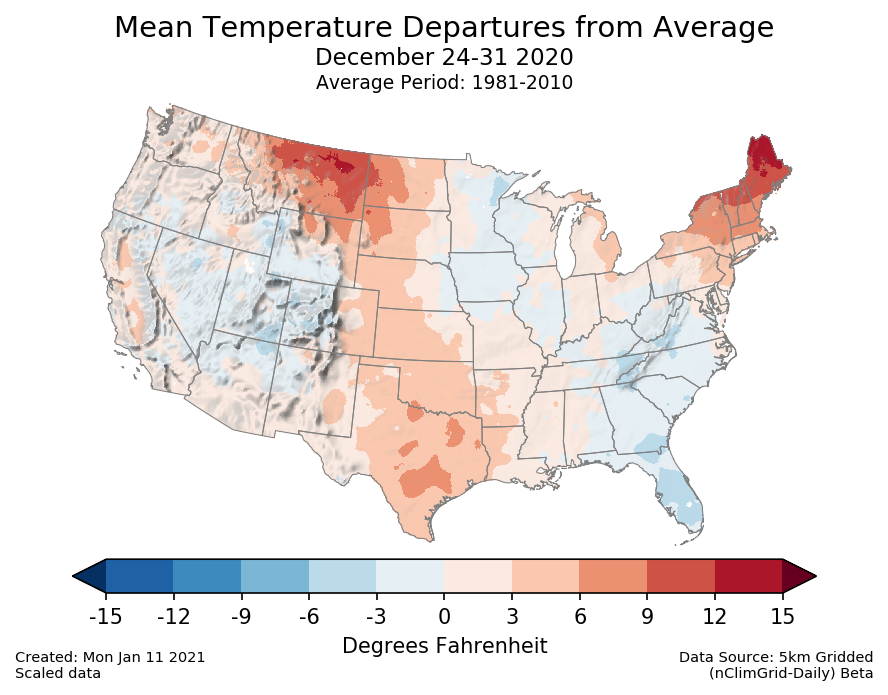 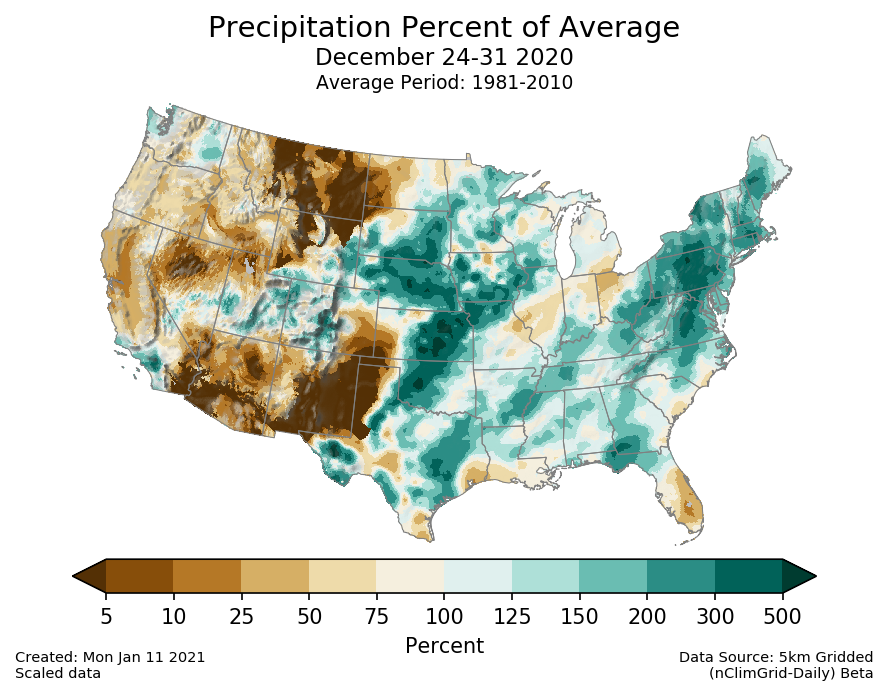 The final week of December had a more meridional and propagating weather pattern. A ridge stretched along the Rockies from Colorado to Alaska and brought anomalous warmth to the Great Plains. A series of low pressure systems brought rain and snow across the eastern U.S., while a trough brought much needed rain to southern California. 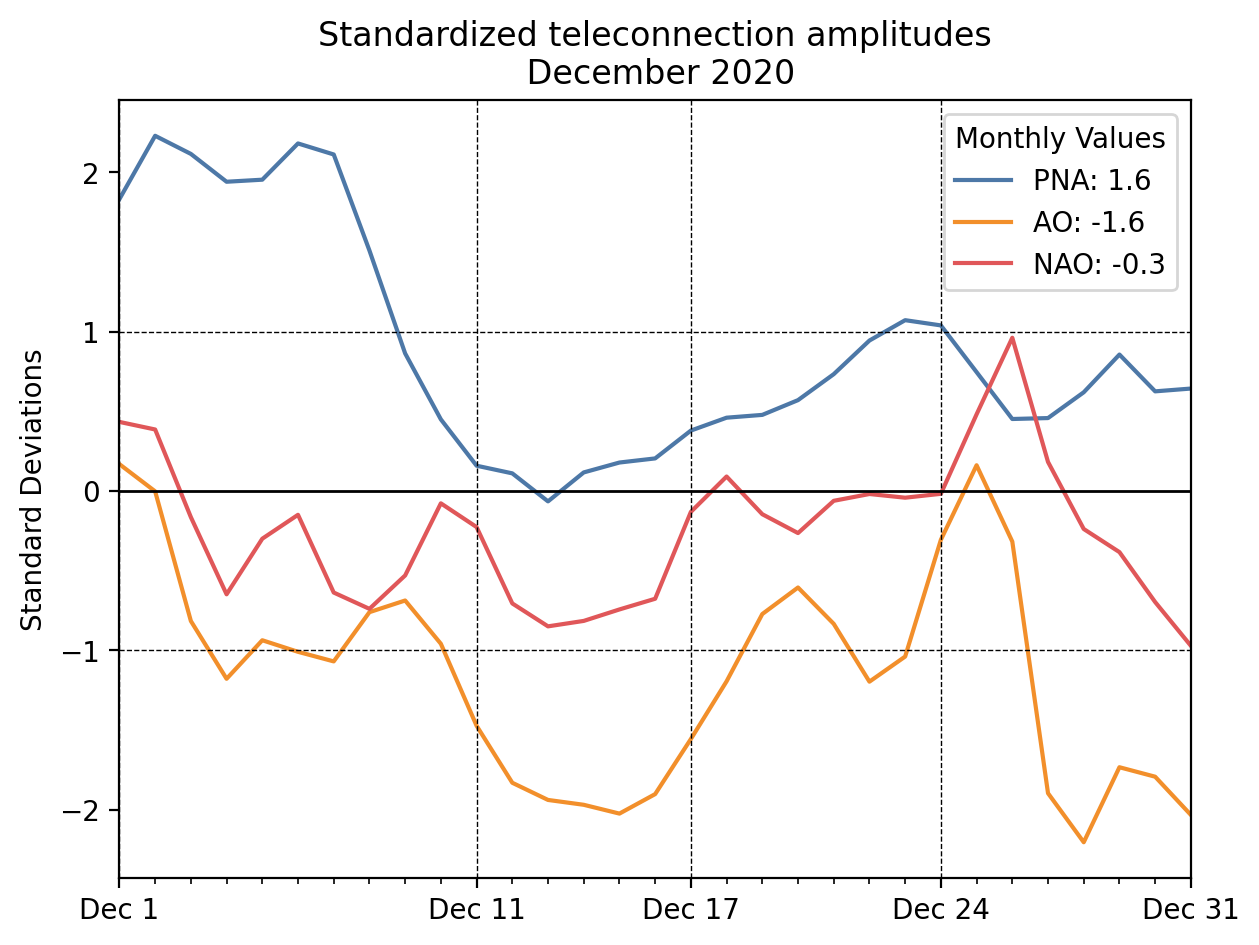 Time series of the PNA, AO, and NAO teleconnection indices for December 2020