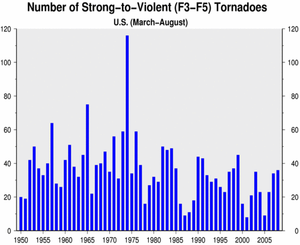 According to NOAA's Storm Prediction Center, preliminary estimates indicate that there were 2192 reported tornadoes from January-December 2008, which is well above the ten-year average. Of these tornadoes, 36 were rated EF3-EF5, which is equivalent to the average number of strong to violent tonadoes which have been reported over the period 1950-2008. Note that these numbers represent preliminary tornado reports and not the final number of total tornadoes.

The beginning of 2008 was an active severe weather period. There were 54 confirmed reports of tornadoes and five deaths across the Midwest between January 7th and 8th, making it the second largest January tornado outbreak on record. On February 5th, while 24 states held primary elections, 87 tornadoes occurred. This deadly event, nicknamed the "Super Tuesday Outbreak", caused 57 deaths in the southeastern U.S. for a total of 58 nationally in the month of February. The number of tornado related fatalities reported in February was the second highest on record for the month.

May was also an active month with 460 confirmed tornadoes, making it the third most active May on record. For the period January through May, a total of 112 tornado fatalities were reported. This year shares the record with 1968 as the eighth deadliest January through May period since reliable records began in 1953. Severe weather continued into June when two outbreaks spawned 289 confirmed tornadoes.

February Tornado Damage Across the South 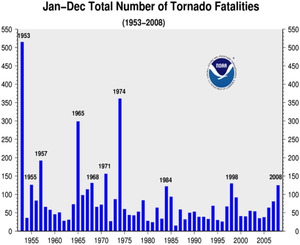 More information on severe weather can also be found on NCDC's Hazards page.