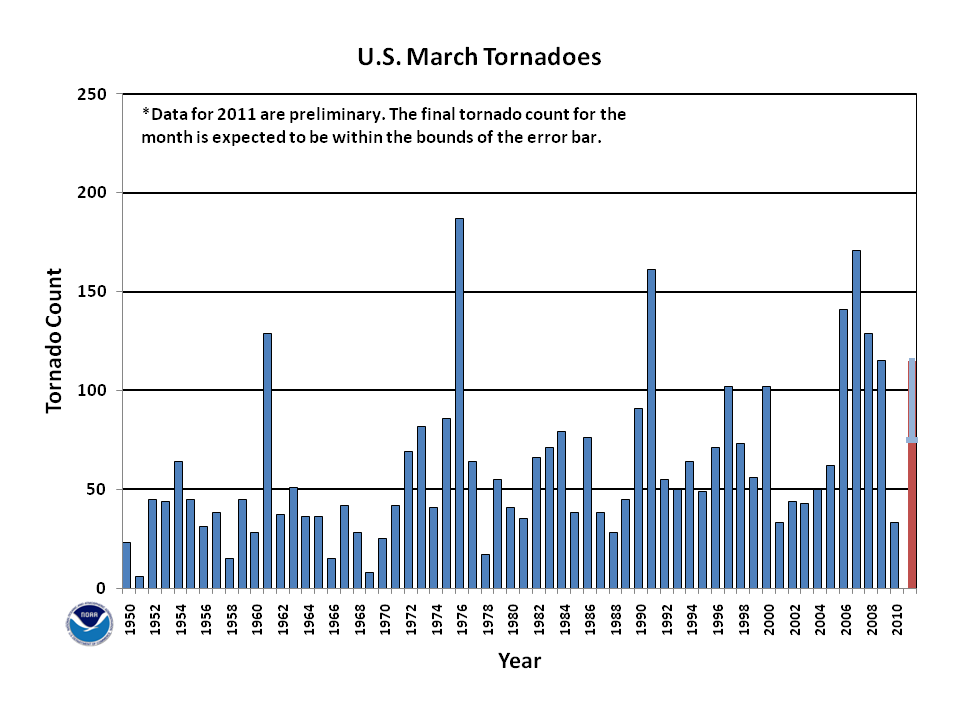 According to data from the Storm Prediction Center (SPC), the preliminary tornado count for March 2011 across the U.S. was 115, marking an above-average February in terms of the number of tornadoes. The preliminary tornado count ties 2009 as the seventh most active March since records began in 1950. The final monthly tornado count is typically less than the preliminary count, and the final count will likely rank among the ten busiest Marches. Most of the tornado activity was confined to the Southeast and the Gulf Coast, with 31 preliminary tornado reports in Louisiana alone. The majority of the tornadoes occurred when a storm system and associated cold front moved across the country on the 8th and 9th, generating severe storms along the Gulf Coast. The severe weather outbreak resulted in 44 tornado reports in the region. During the month, there was one tornado-related fatality near Acadia, Louisiana, when an EF-2 tornado ripped through the town on March 5th. 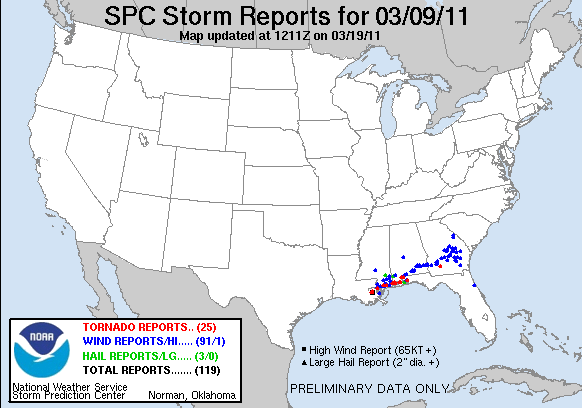 On March 8th and 9th, a strong upper level disturbance interacted with a warm and moist air mass to generate a line of severe weather along the Gulf Coast. There were 44 tornado reports and 122 severe wind reports across Texas, Louisiana, Mississippi, Alabama, Florida, and Georgia. The severe weather outbreak was the largest to occur during March 2011. Several of the tornadoes were rated EF-2 by local National Weather Service forecast offices. Three of the tornadoes touched down near the New Orleans airport, just east of downtown, where Mardi Gras celebrations were in full swing. The storms caused more than 10,000 power outages in New Orleans and another 16,000 in Mobile, Alabama, according to media sources. The storms also brought several inches of rain to the area, causing widespread flash flooding. Fortunately, only minor injuries were reported.