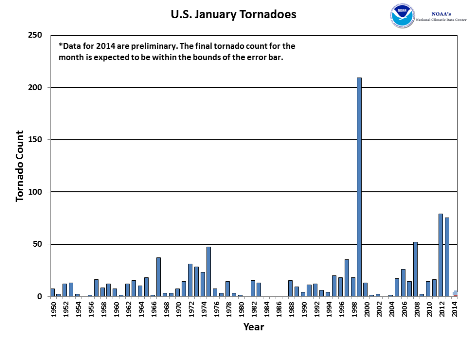 According to data from the Storm Prediction Center, during January, there were four preliminary tornado reports. This is well below the 1991-2010 average of 35 for the month. This was the slowest January, with respect to tornado activity, since 2009. Tornado activity during January is highly variable with some Januarys being very active and others have few or no observed tornadoes. Since reliable records began in 1950, there have been seven times that no tornadoes were reported during January. The most active January was in 1999 when there were over 200 tornadoes reported. The four tornadoes during January 2014 occurred on the 11th when severe weather moved through the Southeast, and were all rated EF-0. One occurred in northern Georgia and three in eastern Virginia. No fatalities or injuries and only minimal damage were observed.