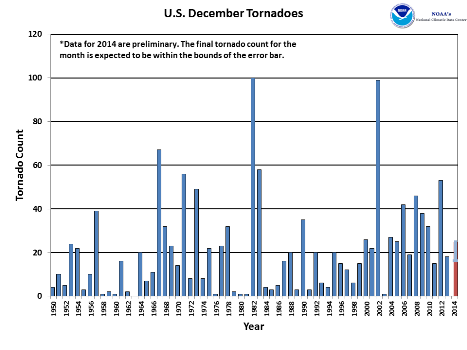 According to data from NOAA's Storm Prediction Center, there were 26 preliminary tornado reports during December, compared to the 1991-2010 average of 24. The majority of the tornadoes, 19, occurred in the Southeast and Midwest on December 23rd and 24th. An EF-2 tornado in Jones County, Mississippi, caused two fatalities on the 23rd while an EF-3 in Marion County caused 3 fatalities. For more information on the 2014 tornado year, please see our annual report. 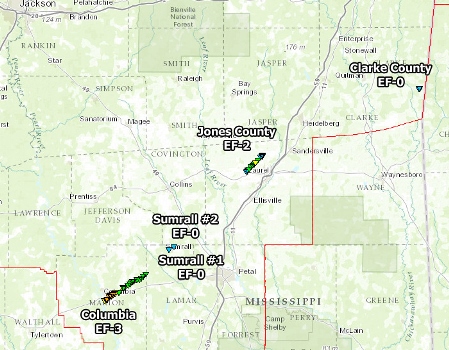 On December 23rd and 24th, a strong cold front moved through the eastern United States. Ahead of the cold front, weak tornadoes were observed in Alabama, Louisiana, Ohio, Georgia, and North Carolina, but the majority of the damage was observed from stronger tornadoes in southern Mississippi. In total, there were 19 preliminary tornado reports. In Mississippi, a long-lived and persistent supercell thunderstorm tracked across several counties spawning at least four confirmed tornadoes. The first of the tornadoes associated with this single supercell thunderstorm occurred in Marion County. The tornado was rated an EF-3 with winds of 165 mph, was on the ground for 12 miles, and had a path width of 830 yards. This tornado resulted in three fatalities and at least 50 injuries. As the supercell moved to the northeast it spawned two EF-0 tornadoes in Sumrall County and eventually an EF-2 in Jones County. The EF-2 had winds of 125 mph, was on the ground for five miles, and had a path width of 350 yards. There were two fatalities associated with this tornado.