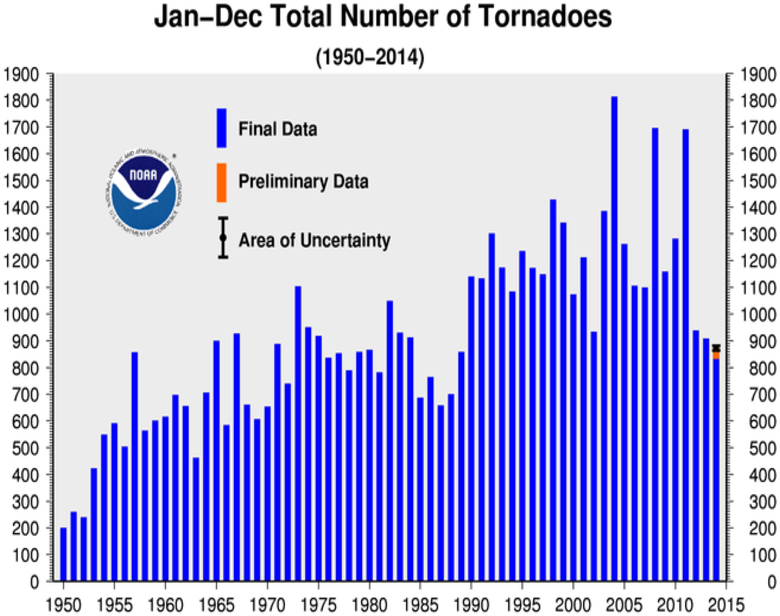 Similar to the past two years, tornado activity across the U.S. during 2014 was below average. During 2014, there were 831 confirmed tornadoes during the January-October period with 50 tornado reports still pending for November-December. This gives 2014 a preliminary tornado count of 881. The 1991-2010 annual average number of tornadoes for the U.S. is 1,253. Depending on the final confirmation rate this could be the slowest tornado year since 1988 when there were 702 confirmed tornadoes. 2014 marks the third consecutive year with less than 1,000 tornadoes impacting the United States. This hasn't occurred since 1987-1989, which was before the deployment of NEXRAD (coincident with the deployment of NEXRAD, the number of weak tornadoes observed annually increased due to better detection). As with most years, there were several large and destructive tornado outbreaks during 2014. There were 47 tornado-related fatalities, most of which occurred in April. There were at least five severe weather outbreaks that caused damages exceeding one billion U.S. dollars. 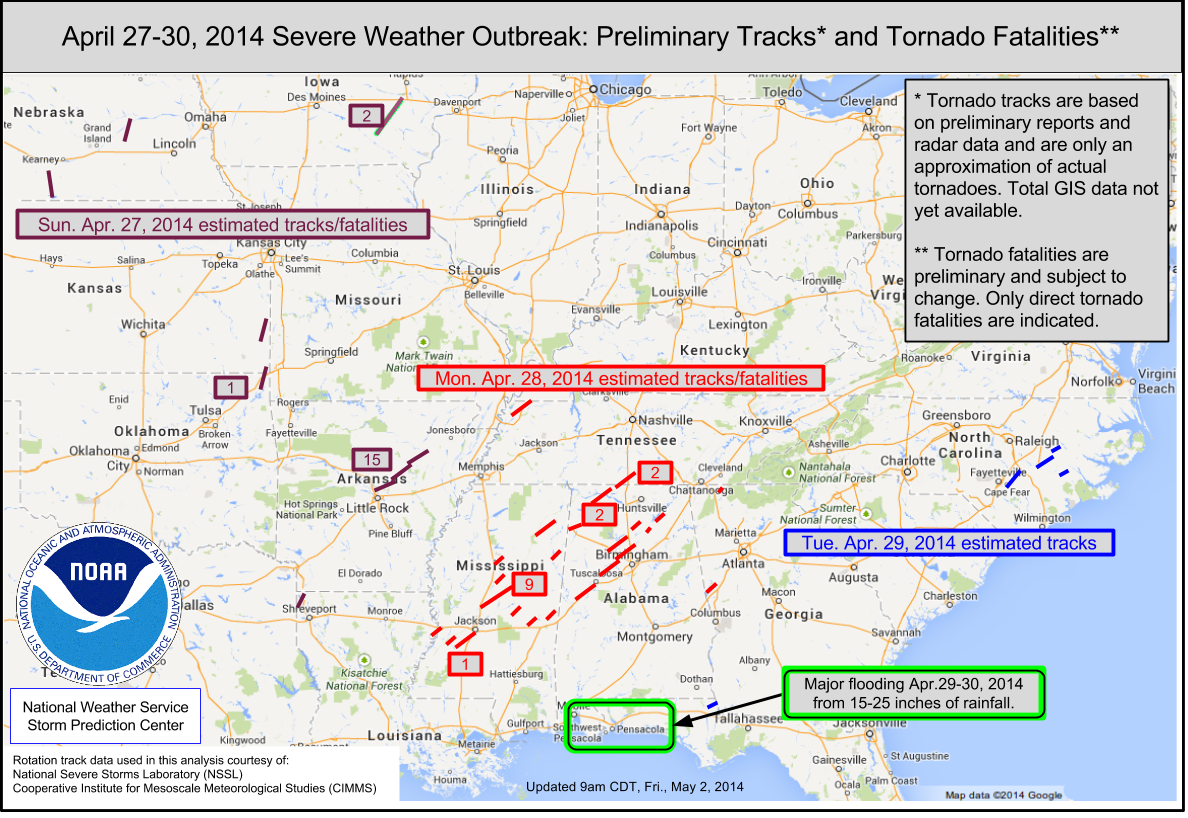 From April 27th through 29th a powerful upper level storm system moved through the Northern Plains and into the Midwest. Ahead of the associated cold front, severe weather, including hail, straight line winds, and tornadoes, wsas observed from Nebraska, through the Midwest and Southeast, to North Carolina. Over the course of the three-day period, there were over 160 preliminary tornado reports with 83 tornadoes confirmed, including at least five EF-3 and two EF-4 tornadoes. The storm also brought heavy rains to the Gulf Coast that caused flash flooding. Total damages from the event exceeded one billion U.S. dollars in damages.

On the 27th, there were 36 preliminary tornado reports (nine confirmed to date) across Nebraska, Iowa, Kansas, Missouri, Oklahoma, Arkansas, and Louisiana. There were 18 reported fatalities on this day. An EF-1 in Iowa killed two people, an EF-2 in Oklahoma killed one person, and an EF-4 in Arkansas killed 15 people. The deadly Iowa tornado was the longest-tracked tornado of the entire outbreak, with a path length of 46 miles. The EF-4 in Arkansas was the first EF-4, or stronger, tornado reported in 2014 and only the third such tornado to impact Arkansas since 2000. This tornado decimated the towns of Mayflower and Vilonia, north of Little Rock, where up to 500 homes were destroyed along the 41 mile long and 1,300 yard wide track. 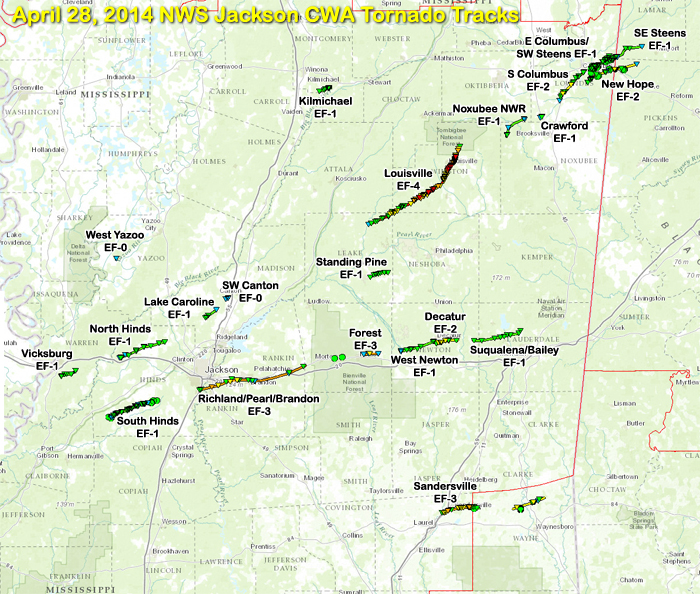 On the 28th, there were 118 preliminary tornado reports (24 confirmed to date) across Tennessee, Mississippi, Alabama, and Georgia. There were 14 reported tornado-related fatalities on this day of the outbreak, ten in Mississippi and two in each Alabama and Tennessee. The deadliest tornado was an EF-4 tornado that tore through central Mississippi, with a path length of 34.3 miles and maximum width of 0.75 mile. Hundreds of structures were heavily damaged and thousands of trees were uprooted, with the town of Louisville being the hardest hit with nine reported fatalities. An EF-3 tornado that had a path length of 20.1 miles and a width of 400 yards hit east of Jackson, Mississippi, killing one person. Two EF-3 tornadoes in northern Alabama and southern Tennessee were responsible for four more fatalities. Both of those tornadoes had path lengths of greater than 15 miles and widths of at least 500 yards.

The final day of the outbreak, the 29th, saw the tornado activity shift eastward into North Carolina. There were 13 preliminary reports of tornadoes (four confirmed to date, mostly across eastern North Carolina). There were no reported fatalities. This day was forecasted to be another major tornado event, but convective storms along the Gulf Coast that dropped up to two-feet of rain, cut off the moisture supply from the Gulf of Mexico, preventing another widespread tornado outbreak. 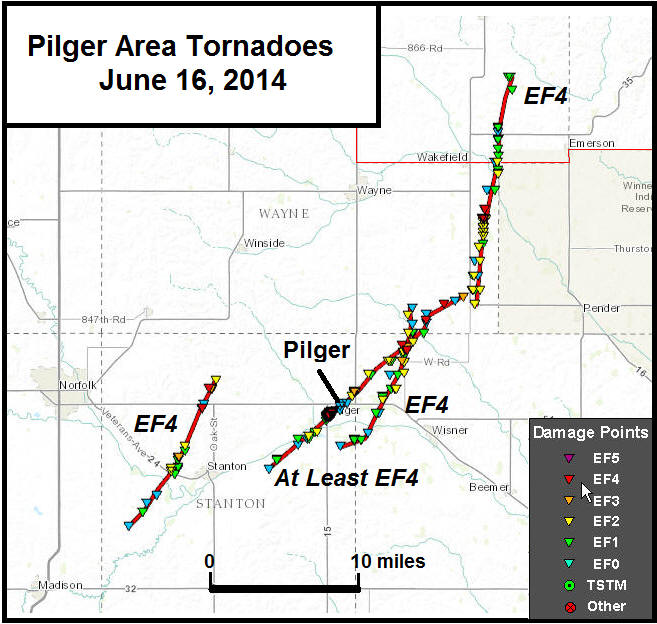 Between June 16th and 19th, over 100 tornadoes were reported across the Central and Northern Plains and Upper Midwest, from Nebraska to Wisconsin. The most destructive tornadoes occurred on the 16th, in eastern Nebraska, where four EF-4 tornadoes were observed. The small town of Pilger was the hardest hit, with reports of 75 percent of the town being completely destroyed, including 100 percent of the business district. One supercell, moving through Stanton County, produced two of the EF-4 tornadoes, including the one that hit Pilger. The double tornadoes were responsible for one fatality each. Double tornadoes, occurring simultaneously from a single supercell thunderstorm, are extremely rare. This marked the first tornado-related fatalities in Nebraska in 10 years, with the last occurring on May 22, 2004. The storm system also brought the first tornado outbreak of the season to the Upper Midwest. An observed tornado near Platteville, Wisconsin on the 16th marked the sixth latest date for the first tornado occurrence in the state during any year since extensive records began in 1950. This was also the latest start for the tornado season in Wisconsin since 1995. 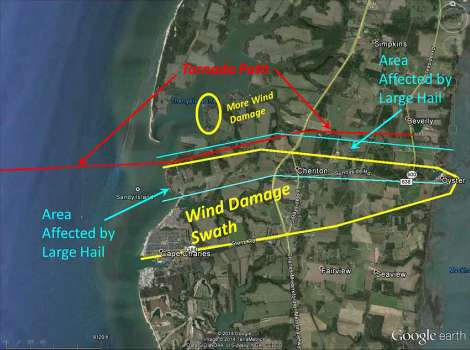 Although no large tornado outbreaks impacted the U.S. during July, two small tornado outbreaks, one on July 8th, and one on July 24th, caused six fatalities. On July 8th, a storm system moving through the Northeast spawned several tornadoes across western New York. An EF-2 tornado that hit Smithfield, New York was on the ground for 2.5 miles and had a width of 235 yards. The tornado hit a mostly rural area, but destroyed three homes and caused four fatalities. On July 24th, a cluster of supercell thunderstorms moved from the Chesapeake Bay across southern areas of the Delmarva Peninsula. One supercell spawned an EF-1 tornado that tracked for eight miles, partially over water, through the Cherrystone Campground in Northhampton County, Virginia. Thousands of people were staying at the campground when the tornado hit, with very little protection available from the storm. The tornado caused two fatalities and at least 36 injuries. Strong straight-line winds and hail up to the size of baseballs also caused considerable damage as the storm system moved through.