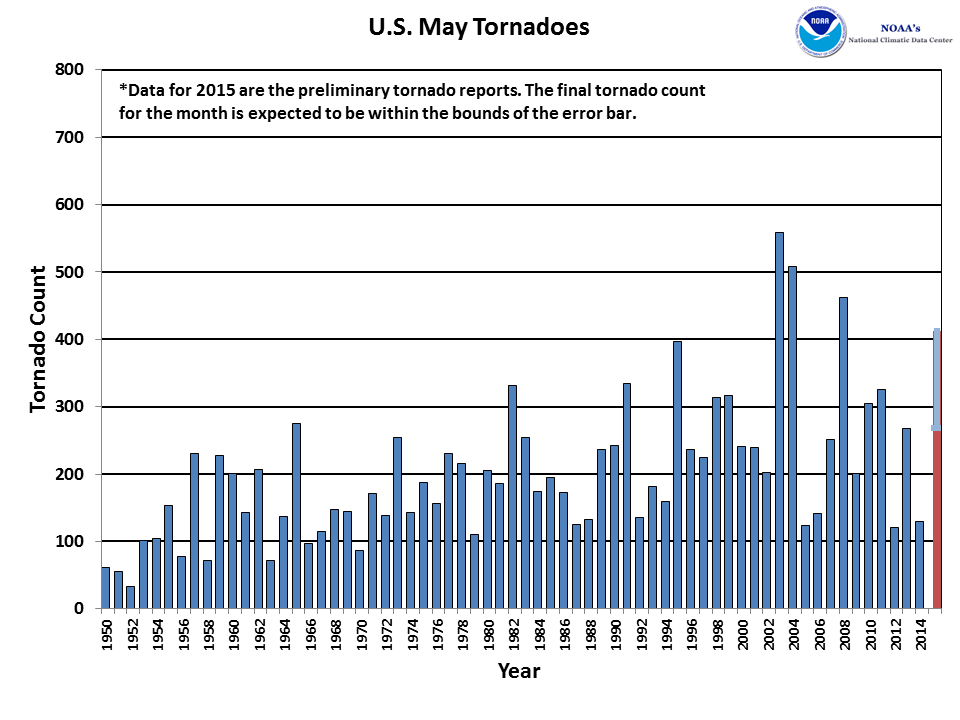 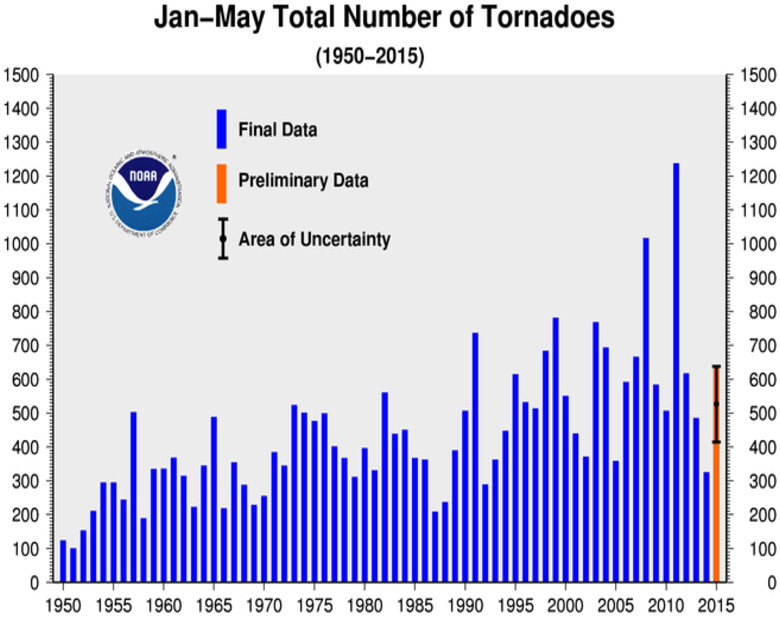 According to data from NOAA's Storm Prediction Center, during May, there were 412 preliminary tornado reports compared to the 1991-2010 average of 276. This was the most active tornado month since April 2011, which is the most active tornado month in the 1950-present period of record, when over 750 tornadoes were observed. It was also the most active May since 2008. The past three years have generally been marked by below-average tornado activity with April and May 2015 bucking the short-term trend. A majority of the tornadoes occurred across the central U.S. during several different outbreaks. During the month there were seven tornado-related fatalities reported.

On May 6th, a weather system moving through the Central and Southern Plains spawned severe weather from Nebraska to Texas. The storm system created unstable conditions with significant wind shear, which is favorable for tornado development. During the evening on the 6th and into the overnight hours there were 59 preliminary tornado reports, including 14 confirmed tornadoes in Oklahoma, two of which were EF-3 in strength. The most destructive tornado of the event occurred in southeastern Oklahoma City. The tornado was an EF-3 with a path length of 1.3 miles and a width of 700 yards and injured 12 people. Several homes were nearly completely destroyed in the impacted areas. The most significant impact from these storms was the heavy rain, with over 7 inches observed in some locations. There were no reported fatalities related to this outbreak.

A two-day tornado outbreak impacted the Central and Southern Plains on May 9th and 10th. There were 87 preliminary tornado reports with five reported fatalities and over 50 injuries. On the 9th, a low pressure system moved from the Southern Rockies into the Plains and tapped into moisture and instability from the Gulf of Mexico. There were 53 preliminary tornado reports across Colorado, Nebraska, Oklahoma, and Texas. Near Eastland, Texas an EF-3 tornado caused one fatality. On the 10th the tornado activity shifted eastward with 34 preliminary tornado reports in South Dakota, Iowa, Oklahoma, Arkansas and Texas. Four fatalities were reported. Two were reported when an EF-3 hit a mobile home in Van Zandt, Texas. Two additional fatalities were reported near Nashville, Arkansas when an EF-2 tornado with winds of 115 mph hit a mobile home park. There were over 40 homes that suffered moderate damage with an additional eight injuries.

NOAA National Centers for Environmental Information, State of the Climate: Monthly Tornadoes Report for May 2015, published online June 2015, retrieved on September 29, 2022 from https://www.ncei.noaa.gov/access/monitoring/monthly-report/tornadoes/201505.