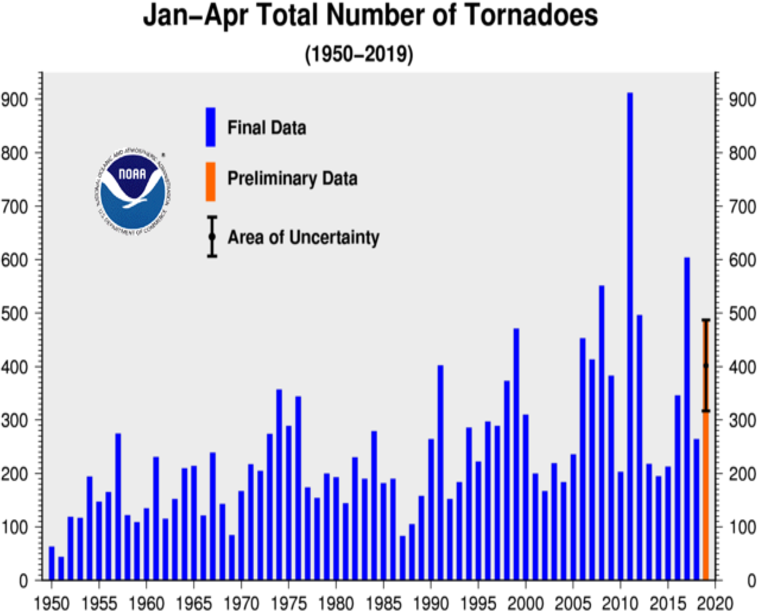 According to data from NOAA's Storm Prediction Center, during April, there were 299 preliminary tornado reports. This is well above, nearly double, the 1991-2010 average of 155 tornadoes for the month of April. A majority of the April tornadoes occurred in three separate events (April 13-14, April 18-19 and April 30).

The first severe tornado outbreak of the month occurred during April 13-14, in which 81 tornadoes developed based on preliminary reports. Many tornadoes were clustered across numerous South and Southeastern states including Texas, Louisiana, Mississippi, Alabama and Georgia. Scattered tornadoes also occurred across several Eastern and Northeastern states including North Carolina, Ohio, Pennsylvania, Maryland and New York. There were two fatalities associated with tornado impacts - one in Mississippi and one in Texas.

The second and most prolific tornado event of the month occurred during April 18-19, in which 95 tornadoes developed based on preliminary reports. A similar number of tornadoes were reported on both the 18th and 19th. The 45 tornadoes which occurred on April 18 were nearly all clustered in central Mississippi while the 50 tornadoes reported on April 19 were widespread from Florida to Pennsylvania. This multi-day outbreak of tornadoes caused property damage and injuries, but no deaths were reported.

The third tornado outbreak of the month occurred on April 30, in which 67 tornadoes developed. A majority of these tornadoes occurred in southern Missouri and eastern Oklahoma. Scattered tornadoes also occurred in Texas, Arkansas, Kansas and Illinois. These tornadoes caused two fatalities in Oklahoma.

NOAA National Centers for Environmental Information, State of the Climate: Monthly Tornadoes Report for April 2019, published online May 2019, retrieved on October 5, 2022 from https://www.ncei.noaa.gov/access/monitoring/monthly-report/tornadoes/201904.