Skip to main content
Issued 23 October 2013
Please note that the values presented in this report are based on preliminary data. They will change when the final data are processed, but will not be replaced on these pages.


The atmospheric circulation during the first half of September 2013 was dominated by the subtropical high pressure belt (known as the Bermuda High), which brought warmer (weeks 1, 2, 3, 4) and drier (weeks 1, 2, 3, 4) than normal weather to much of the country, especially east of the Rockies. Upper-level weather systems moving in the jet stream flow, which brought wet weather to the West the first half of the month, spread east of the Rockies during the second half of September (weeks 1, 2, 3, 4). But even with upper level troughs moving across the country, Gulf of Mexico moisture was cut off by predominant northerly flow, so much of the Midwest and East Coast was drier than normal. September was record wet in Colorado, Oregon, and Washington, contributing to the twelfth wettest September in the 119-year record for the nation as a whole. Above-normal precipitation in the West, Great Plains, and Alaska reduced drought coverage in those regions, but drought expanded in Hawaii and slightly in the Midwest. The percentage of the U.S. in moderate to exceptional drought decreased dramatically from 45.3 percent at the end of August to 37.2 percent at the end of this month, according to U.S. Drought Monitor statistics. According to the Palmer Drought Index, which goes back to the beginning of the 20th century, 19.0 percent of the CONUS was in moderate to extreme drought at the end of September, a decrease of about 12 percent compared to last month. 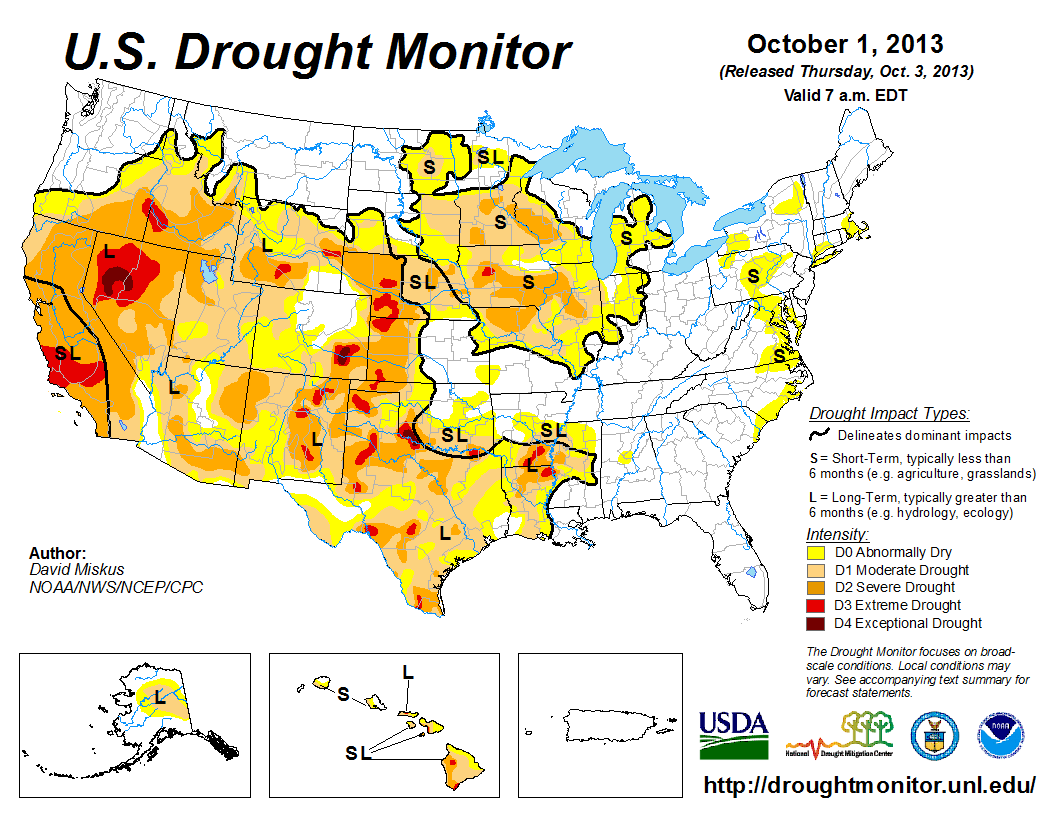 By the end of the month, the core drought areas in the U.S. included:


There was greater coherence in the spatial pattern of wetness during September 2013 than in the pattern of dryness, but the dry patterns became more spatially coherent at longer (2-3-month and 24 months) time scales. The 1-month SPI map shows dryness in the Midwest from the Upper Mississippi Valley and Great Lakes to Mid-Mississippi Valley, along the Mid-Atlantic Coast, and in parts of the Southeast. The dryness in the Midwest is more intense and spatially coherent at 2 to 3 months, but is replaced by wetness at 6 to 9, and 12-month time scales. The Mid-Atlantic Coast dryness is still evident at 2 and 3 months, but disappears by 6 months. Wet conditions dominate the West at 1 to 3 months, and even partially at 6 months, due to the wet September and wet summer monsoon. But the dry conditions from earlier in the year are evident at the 9-month time scale, with western dryness extending out to 24 months. Wet to neutral conditions dominate the Great Plains at 1 to 3 months, with a mixed pattern evident at 6 to 9-months, and dryness dominant in the Southern Plains at 12 months and Central Plains at 24 months. September was dry across parts of the Southeast, but wetness dominates at 3 to 12 months, with large areas of neutral conditions at 24 months.

Drought conditions were reflected in numerous agricultural, hydrological, and other meteorological indicators, both observed and modeled. Monthly streamflow was below normal in some basins across the Midwest, Great Plains, West, and Mid-Atlantic, as well as Hawaii. As seen in USDA observations, topsoil was short to very short of moisture (dry to very dry) across the Great Plains to Midwest (where several states had 50 percent or more of the topsoil short or very short) and along the Mid-Atlantic Coast — the figure was 80 percent in Delaware, 75 percent in Iowa, and 70 percent in Illinois (the dry soils are confirmed in NLDAS modeled soil moisture percentiles for the top soil layer and total soil layer). Consequently, more than half of the pasture and rangeland was rated by the USDA in poor to very poor condition in Iowa and Wisconsin, as well as in several western states (100 percent in California and 74 percent in Nevada). Satellite-based observations of vegetative health (VegDRI, VHI) and modeled vegetative health (USGS Soil Water Index and Water Requirement Satisfaction Index) indicated lingering vegetative stress in the drought areas in spite of the recent rain, but the weekly Crop Moisture Index revealed improving conditions throughout the month (weeks 1, 2, 3, 4).


Hawaii: Precipitation for September 2013 and the last two to three months was below normal across much of the state. Rainfall earlier in the year gave above-normal percentages to some stations at the six to nine month time scales, but it was not enough to overcome dryness at longer time scales (last 12, 24, 36 months). Moderate to extreme drought jumped this month (to 63.3% of the state) compared to last month (39.3%). Streamflow was much below normal averaged across the Big Island and below normal averaged across Maui.

Alaska: The precipitation pattern for September and the last two months was wetter than normal for the interior stations in Alaska but drier than normal for many southern and western coastal stations. But dryness was evident for the interior stations at longer time scales (last 3, 6, 9, 12, 24, and 36 months). Severe (D2) drought disappeared and moderate (D1) drought shrank this month to 16.5 percent of the state on the USDM map (compared to 20.9 percent in moderate to severe drought last month).

Puerto Rico: Interior parts of Puerto Rico had below-normal rainfall during September. The below-normal area shifted toward the southern coast at longer time scales (2, 3, 6, and 9 months). Streamflow averaged above normal and there was no drought or abnormal dryness on the USDM map.


The September precipitation anomaly pattern of dryness in the Midwest and East Coast was reflected in the state ranks, with Maryland and Delaware ranking in the top ten driest category and 13 other states falling in the driest third of the historical record. This was more than balanced by above-normal precipitation from the Great Plains westward with record wetness occurring in parts of the West (Colorado, Oregon, Washington).


For the last three months (July-September 2013), the Midwest seemed to be a dry epicenter surrounded by wetter-than-normal conditions. Iowa (2nd driest), Illinois (4th), Wisconsin (5th), and Minnesota (8th) all had the tenth driest, or drier, September while two other states (Indiana and Missouri) ranked in the driest third of the historical record. In fact, this year marked the third consecutive dry July-September for Iowa.


At the six-month time scale (April-September 2013), conditions were generally near to wetter than normal across the country at the state level, but for the year-to-date, parts of the West were drier than normal, with California having the driest January-September in the 119-year record. For the past 12 months (October 2012-September 2013), dryness is evident in parts of the West and Southern Plains, with California, Nevada, and Texas ranking in the driest third of the historical record.

Percent area of the Western U.S. in moderate to extreme drought, January 1900 to present, based on the Palmer Drought Index.

The weather in the West during September was dominated by several upper-level systems (troughs) which enhanced the monsoon precipitation. At mid-month, one upper-level trough became cut off as an upper-level closed low over the southwestern U.S. while an upper-level closed high developed over the southern Plains. This combination of pressure systems produced a strong and persistent southerly wind circulation which funneled tropical moisture into the Southern and Central Rockies, Great Basin, and Central Plains. Moisture from the remnants of tropical systems Manuel and Ingrid enhanced the moisture, contributing to widespread, persistent, heavy rains. Orographic intensification along the Front Range of the Colorado Rockies resulted in rainfall amounts of 5-18 inches in many locations over the September 10-16 period. Near the end of the month, a series of frontal systems swept across the Northwest, partially fueled by the remnants of Typhoon Pabuk, producing strong winds and heavy rains, some of which broke September records. For the month as a whole, most areas of the West had above-normal precipitation, the exception being the extreme coastal Southwest. The precipitation from these systems and from the summer monsoon helped make up some of the long-term deficits, especially during the last two to three months. But significant deficits remained at longer time scales (9 to 12 months). Water year (October-September) precipitation was below normal for many parts of the West (as seen in low elevation station percent of normal, high elevation [SNOTEL] station percentiles, basin percent of normal and percent of average maps). Temperatures during September and much of the last year (last 3, 6, 9, and 12 months) were unusually warm in the West. The SPI measures water supply and indicated dry (stressful) moisture conditions, especially in the Southwest and Far West, for the calendar year and water year to date. But when temperature is incorporated into the index (as the Standardized Precipitation Evaporation Index, or SPEI), moisture stress covers a slightly larger area and is more intense (January-September, October-September). The recent above-normal precipitation was reflected in near- to above-normal streamflows in most basins. However, reservoir storage was still near to below average in most states. The month began with several large wildfires in California and the Pacific Northwest, but the fires diminished as the month wore on. According to the USDM, 59.0 percent of the West was experiencing moderate to exceptional drought at the end of September, a drop of about 17 percent compared to last month. The Palmer Drought Index percent area statistic was 29.1 percent, a decrease of about 27 percent from last month.

State/Regional/National Moisture Status
A detailed review of drought and moisture conditions is available for all contiguous U.S. states, the nine standard regions, and the nation (contiguous U.S.):