The data presented in this drought report are preliminary. Ranks, anomalies, and percent areas may change as more complete data are received and processed, but they will not be replaced on these pages.

The year started out with 31.0 percent of the contiguous U.S. (CONUS) in moderate to exceptional drought (based on the U.S. Drought Monitor [USDM]) manifested in four drought epicenters — two large areas of moderate to exceptional drought stretching across the Far West and in the Central to Southern Plains, an area of moderate to severe drought in the Midwest, and areas of moderate drought in the Northeast. Moderate to extreme drought continued across parts of Hawaii. As the year progressed, drought expanded to encompass 40.1 percent of the CONUS by May 6th and was mainly limited to the West and the Central to Southern Plains. A steady contraction of the national drought area occurred beginning in the summer. By year's end, the drought area had fallen to 28.7 percent of the CONUS, which is the smallest extent since December 2011. 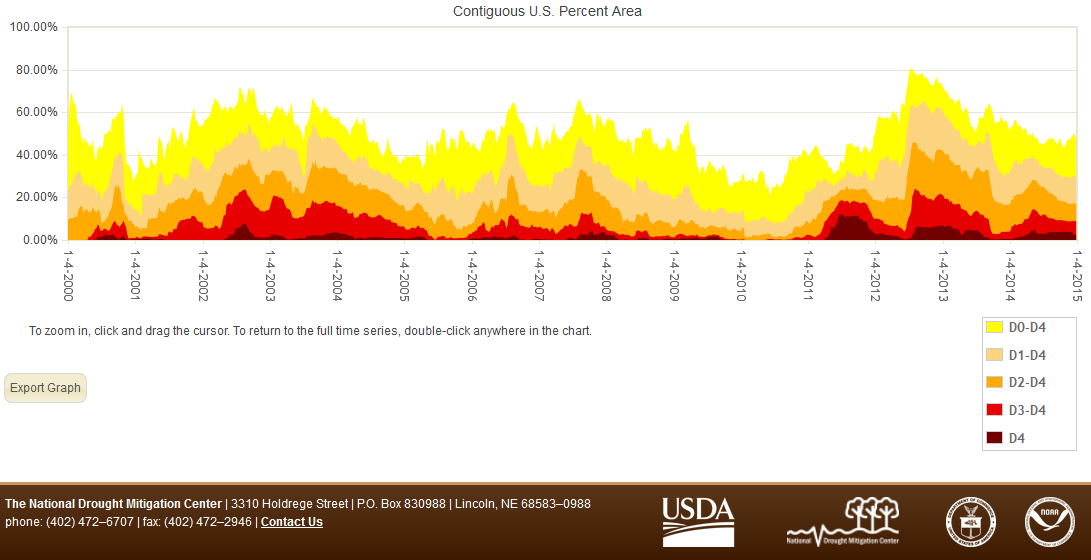 Unusual warmth characterized the months of 2014, but unusually cold temperatures were also widespread. Eight months (January, February, March, June, July, September, October, and December) had ten percent or more of the country experiencing very warm temperature anomalies (at the 90th percentile of the historical record or warmer), while three (February, July, and November) had ten percent or more of the country experiencing very cold temperature anomalies (at the tenth percentile of the historical record or colder). Two months (July and December) had more than a fourth of the country very warm, while over 40 percent of the country was very warm during October. Two months (July and November) had more than 30 percent of the country very cold. Not only did the temperature anomalies go from one extreme to the other from month to month, but the extremes occurred across space as well. For example, July had 26 percent of the country very warm and 30 percent very cold. This was due to the high amplitude meridional circulation pattern that occurred during the month. This pattern of a long-wave ridge over the western CONUS and trough over the east occurred frequently throughout the year, resulting in statewide annual temperature ranks that were very warm in the West and very cold along the Mississippi River Valley. When averaged across the country, the cold and warm temperature anomalies tended to cancel each other out, except for the last three months — October 2014 ranked as the fourth warmest October in the 1895-2014 record, November 2014 as the 15th coldest November, and December 2014 as the second warmest December.

Drought is an imbalance between water supply (precipitation) and water demand. In nature, water demand is primarily evapotranspiration, which is easily measured by temperature. Warmer temperatures are associated with more evapotranspiration, which can exacerbate drought conditions. The Palmer Z Index integrates these water supply and water demand components. On a national scale, the Palmer Z Index started the year alternating between dry (January, March, May) and wet (February, April) conditions, then wet conditions dominated during the summer (especially June and August), with the last four months averaging out to near neutral conditions nationally. But on a regional basis, drought persisted for several months, especially in the Far West.

Percent area of the West in moderate to extreme drought since 1996 (based on the Palmer Drought Index).

The early drought expansion occurred because the West started the 2013-2014 hydrologic year (water year, October 2013-September 2014) on a very dry note, with the dryness centered in California to southern Oregon and extending across the Pacific Northwest and into northern Nevada. The West region (California-Nevada) had the 22nd driest October, 29th driest November, sixth driest December, and third driest January in the 1895-2014 record. With two of the normally wettest months sixth and third driest, the water year through January 2014 ranked as the driest October-January on record for the West region. The Northwest region (Idaho, Oregon, and Washington) had the ninth driest October, 24th driest November, eighth driest December, and 19th driest January, resulting in the third driest October-January on record. The Southwest region (Arizona, New Mexico, Colorado, and Utah) was drier than normal for most months from December 2013 through June 2014, with December 2013-April 2014 and December 2013-June 2014 both ranking sixth driest on record.

Summer is the normal wet season for the Southwest. Rainfall from summer monsoon showers and remnants of tropical systems gave the Southwest region its second wettest July-September on record. The 2014-2015 water year started dry, but beneficial rain in December 2014 gave the West region the 46th wettest October-December and the 44th driest January-December for 2014.

Persistent and unusually warm temperatures occurred in the West during 2014, with the West region having the warmest year in the 120-year record. Three states (Arizona, California, and Nevada) logged the warmest year on record, while five others (New Mexico, Utah, Idaho, Oregon, and Washington) ranked in the top ten warmest category. By increasing evapotranspiration, the hot temperatures intensified the drought conditions. This was especially true for California, which has suffered through three consecutive hydrologic years with drier than normal conditions. Indeed, six of the last eight hydrologic years have been drier than normal for California. The Standardized Precipitation Evapotranspiration Index (SPEI) integrates the effects of both drier and warmer than normal conditions. When the unusual warmth in California during the last three decades is combined with the excessive dryness of the last several years, the statewide SPEI reaches record low levels, both for the 12-month time scale (August 2013-July 2014) and the 36-month time scale (August 2011-July 2014).

Like the SPEI, the Palmer Hydrological Drought Index (PHDI) is another drought index that integrates both moisture supply and moisture demand. The very dry and record hot conditions during 2014 drove the PHDI to record low levels for many parts of California, including the Central Coast Drainage (climate division 4), the San Joaquin Drainage (climate division 5), and the South Coast Drainage (climate division 6), as well as statewide. Some of these analyses show a disturbing trend toward more extreme droughts over the last 40 years in California. Impacts from the severity of the 2014 dryness, and the prolonged multi-year drought in California, included diminished reservoirs, low streamflows, dried out wells, and ravaged crop and rangeland.

Drought expanded in the Great Plains during spring 2014 but above-normal rainfall during the summer caused it to contract. At its peak, 35.9 percent of the High Plains (Central to Northern Plains) and 54.4 percent of the Southern Plains were in moderate to exceptional drought in early May. Kansas had the third driest and Oklahoma the eleventh driest March-May during 2014. The first five months of 2014 were each drier than normal for Oklahoma, with the state ranking third driest for January-May. Texas had the fifth driest January-April. By late fall, abnormal dryness and drought began redeveloping in the Northern Plains. In spite of some wetter-than-normal months during 2014, the year still ended up drier than normal for Oklahoma and Texas. It marked the fourth consecutive drier-than-normal year for Texas, while four of the last five years have been drier than normal for Oklahoma. By the end of the year, 33.9 percent of the Southern Plains was still in moderate to exceptional drought. 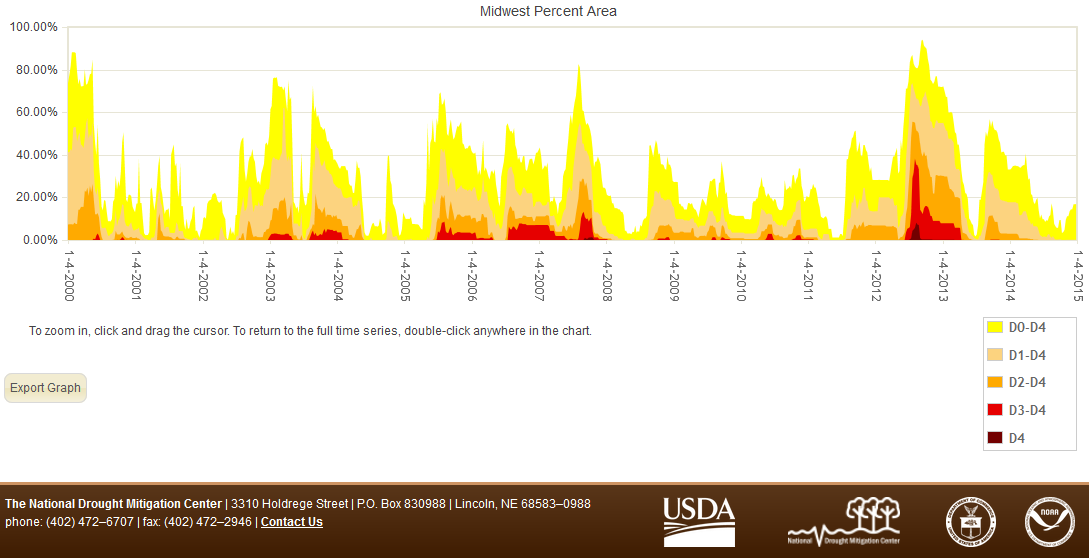 Percent area of the Midwest in moderate to exceptional drought, 2000-2014, based on the USDM.

The Midwest began 2014 with 17.7 percent of the region in moderate to severe drought, according to the USDM. Spring and summer precipitation reduced the drought area to less than 1 percent by September.

Dry conditions beginning in the late summer caused drought to appear over parts of the Southeast, mostly in Alabama and Georgia, with 9.5 percent of the region in moderate to severe drought by mid-November.

Precipitation the first weeks of 2014 eliminated vestiges of leftover 2013 drought in the Northeast region, but dry conditions during the fall of 2014 caused moderate drought to return, expanding to about 3.8 percent of the region by mid-October. Heavy rain late in the year greatly reduced the Southeast and Northeast drought areas. 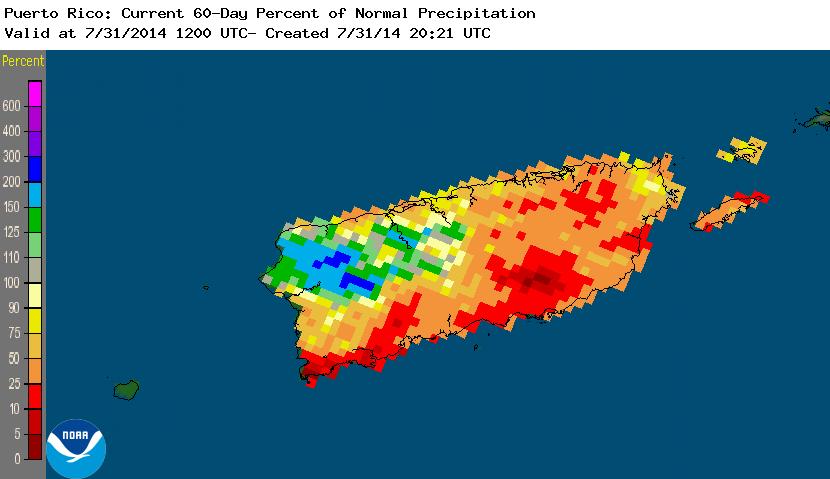 Puerto Rico began 2014 with abnormally dry conditions on the USDM map. Very dry weather during the summer of 2014 over the southern and eastern portions of the island resulted in the introduction of moderate drought conditions in July, with a peak coverage of 17.7 percent of the island by July 29th. Subsequent above-normal rainfall eliminated the drought area and greatly reduced the abnormally dry area by late fall.