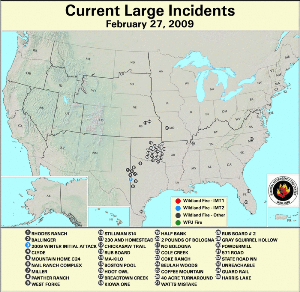 Wildfire activity across the United States was above average in February .  Although 30 large fires that had been active during the last week in January were contained by early February, by mid–month 18 new large fires had developed across Texas (4), eastern Kansas (3), Oklahoma (3), western Missouri (2), southern Florida (2), western North Carolina (1), Southern Mississippi (1), California (1), and the Arkansas/Louisiana border (1).  During the following week, fire activity was largely quelled in the central U.S., but several new fires flared in southern Florida.  At the end of February, however, Oklahoma and Texas saw worsening fire conditions as 27 large fires developed in a region from western Oklahoma and eastern Arkansas southwestward into central Texas.  As of February 27th 118 large fires have been battled and contained in 2009, while 13 large fires remained active – 7 in Texas, 5 in Oklahoma, 1 in Florida. 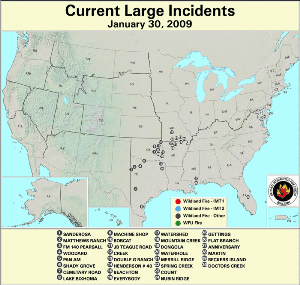 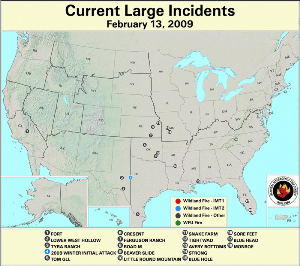 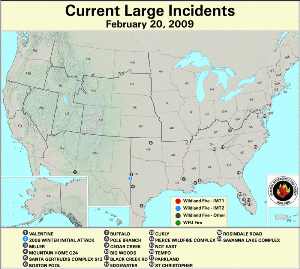 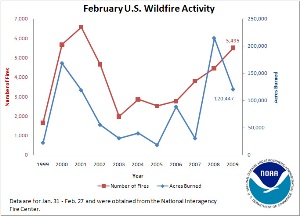 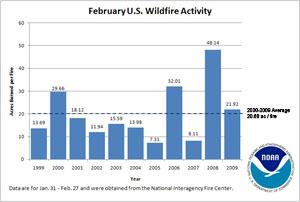 The U.S. Drought Monitor at the end of February indicated severe to extreme drought conditions over much of California, Texas and Hawai'i as well as Nevada, northern Wisconsin and the western Upper Peninsula of Michigan, and the southeast U.S. from Florida along the Appalachian mountains to northern Virginia.  Extreme to exceptional drought was present in southern central Texas, northern California, the western Carolinas and northeastern Georgia, and parts of the Hawaiian Islands.  For most of these regions, this is a continuation or worsening of drought conditions that were present at the start of February

Moderate to very high fire danger was present across much of the Southern Tier of states at the beginning of the month.  Pockets of extreme fire danger existed in southern California and western Arizona, western Texas, the southern Mississippi Valley, western Missouri, and North Carolina.  By the end of February, however, a series of winter storms over northern California and across the southern Atlantic states greatly reduced fire danger in those places.  In addition, fire danger was reduced in western Texas, though it increased in southern Arizona and eastern Texas at the end of the month, according to the U.S. Forest Service (USFS) – Wildland Fire Assessment System.

At the start of February, exceptionally low 10–hour dead fuel moisture levels existed across much of the Southwest U.S., from southern California across to western Texas.  Extremely dry fuel conditions were also present in northern California early in the month.  Thanks to the aforementioned precipitation over northern California and the eastern seaboard throughout February, fuel moisture increased dramatically in those regions by the end of the month.  Unfortunately, fuels continued to dry out in the Southwest, with the area of critically low fuel moisture expanding northward into the Central Plains states toward the end of the month.  The 100–hr and 1000–hr fuel moisture levels followed a pattern similar to the 10–hour levels during February.

The Keetch–Byram Drought Index (KBDI), a widely used drought index for fire risk, showed dry conditions at the beginning of the month in parts of the western and southwestern U.S. along with southern Florida.  By the end of February, KBDI–indicated conditions had worsened in southern Texas, but improved in northern California.  Elsewhere, conditions remained relatively unchanged throughout the month.

Map of fire activity in Victoria, Australia on 9 February

A severe and widespread outbreak of bushfire activity in the southeastern Australian state of Victoria took place during February.  These fires occurred in conjunction with a record–setting heat wave across the state, according to a special statement (pdf document) released by the Australian Bureau of Meteorology, as well as on the heels of a 13–year drought that brought Melbourne less than 0.16 inch (4 mm) of rain since January 1st. 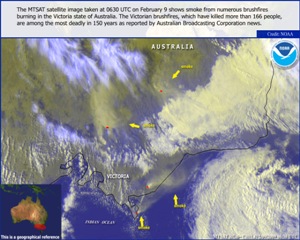 Satellite image of fire activity in Victoria, Australia on 9 February

According to preliminary reports from the Victoria Department of Sustainability and Environment over 1,111,970 acres (450,000 hectares) were burned between February 7th and March 6th.  Approximately 10,000 people were displaced by the fires that completely destroyed several towns and razed more than 2,000 homes and businesses.  The death toll from the fires was 210 as of March 4th, and is expected to climb further as forensic analysis continues.  Several of the fires are believed to have been deliberately set, and a many of the dead perished after delaying evacuation until it was too late to escape the fast moving flames, according to reports.

The Australian government noted that fatalities from this outbreak were the worst on record, far exceeding the 75 deaths in the February 16th, 1983 "Ash Wednesday" fire event and the 71 of the "Black Friday" outbreak of January 13th, 1939.  The Black Friday bushfires scorched approximately 5 million acres (2 million hectares), while the Ash Wednesday outbreak burned 513,979 acres (208,000 hectares) and remains Australia's most costly bushfire event in terms of property losses.  In response to a request by Australia for assistance, the United States sent 60 wildfire specialists to aid in the operations, planning and logistics of battling the widespread fire activity.