October–December 2016 maps—is generally reflected by areas of positive and negative temperature anomalies at the surface, respectively.

The combined average temperature over global land and ocean surfaces for December 2016 was the third highest for this month in the 137-year period of record, at 0.79°C (1.42°F) above the 20th century average of 12.2°C (54.0°F). However, this value falls well short of the record high December temperature, 1.12°C (2.02°F) above average, which was set in 2015. The second warmest December was in 2014, making these last three Decembers the three warmest on record.

Warmer- to much-warmer-than-average conditions were present across much of the world's land surfaces, with record warmth across southern Mexico, parts of central and southern Africa, and areas across southern and southeastern Asia, according to the Land & Ocean Temperature Percentiles map above. According to NCEI's Global Regional analysis, the African continent as a whole was second warmest, behind only 2009, and South America was third warmest for the month. Cooler-than-average and much-cooler-than-average conditions were observed across the northwest quarter of the contiguous United States into southwestern Canada, eastern Europe into southwestern Asia, and a large section of northwestern Russia, where temperatures dipped to more than 5°C (9°F) below their average December values in places. No land areas experienced record cold temperatures during December 2016.

Most of the world's oceans experienced warmer- to much-warmer-than-average temperatures during December 2016, with record warmth present across regions of the Norwegian and Barents Seas in the Arctic, sections of the central Atlantic, parts of the northwestern Indian Ocean along the east African coast, and a few small areas scattered across various regions of the Pacific. Cooler-than-average conditions were observed in much of the northeastern and northwestern Pacific, part of the South Pacific well west of Chile, the North Atlantic waters to the south of Greenland, and regions of the Indian Ocean off coastal western Australia. No record cold sea surface temperatures were present during December.

La Niña conditions prevailed throughout December as sea surface temperatures remained below average across the eastern and central tropical Pacific Ocean. According to NOAA's Climate Prediction Center, a transition to ENSO-neutral is expected to occur by February 2017, with ENSO-neutral then continuing through the first half of the year. This forecast focuses on the ocean surface temperatures between 5°N and 5°S latitude and 170°W to 120°W longitude, called the Niño 3.4 region.

January–December map of temperature anomalies shows that higher-than-average temperatures occurred across the vast majority of the globe during 2016, combining to bring overall record warmth for 2016, with an annually averaged temperature that was 0.94°C (1.69°F) above the 20th century average. This surpasses the previous record set just last year by 0.04°C (0.07°F). The global temperatures were majorly influenced by strong El Niño conditions at the beginning of the year that weakened and dissipated in the spring, and, to a lesser extent, by weak La Niña conditions that developed later in the fall. 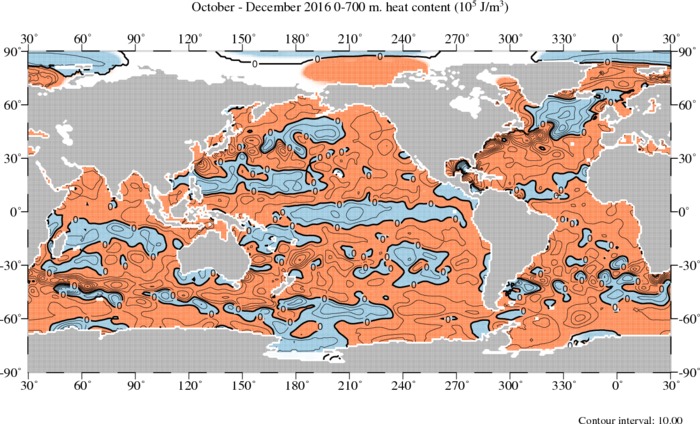 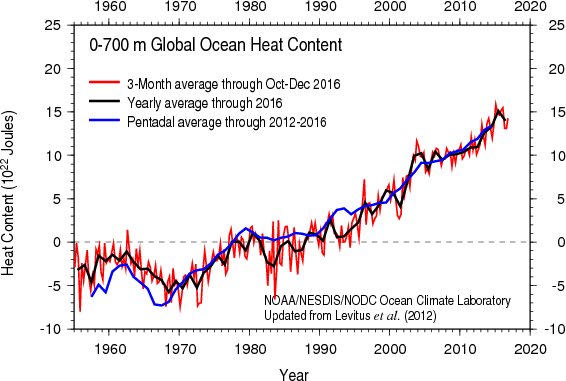 Global ocean heat content (OHC) for October–December 2016 was slightly lower than for the same quarter in 2015, but still the second highest October–December OHC on record. Although ocean surface temperatures were highest in 2016, the global OHC was lower than in 2015. Overall, the latest OHC reveals widespread warmer than normal conditions. In particular, the Arctic Ocean, the Gulf Stream/North Atlantic Current, the Kuroshio Current/Kuroshio Extension, and the Agulhas Current and its retroflection show much higher than long-term mean OHC. Cooler than normal conditions still exist in the central North Pacific Ocean and subpolar North Atlantic Ocean, around the Equator in the central Pacific Ocean, and tropical and western South Indian Ocean.