September 2018 map—is generally reflected by areas of positive and negative temperature anomalies, respectively, at the surface.

During September 2018, much of the global land and ocean surfaces had warmer- to much-warmer-than-average conditions. The most notable warm temperatures were present across southern South America, Alaska, the southwestern and eastern contiguous U.S., much of Europe, the Middle East, as well as western and eastern Russia, where temperature departures from average were +2.0 (+3.6°F) or higher. Record warm temperatures were present across parts of western Alaska and its surrounding ocean, Far East Russia, the Barents Sea, as well as across parts of the Atlantic Ocean, southern South America, western Indian Ocean, Europe, and the Middle East. Cooler-than-average conditions were present across much of Canada, Mongolia, northern China, and across parts of eastern Indian Ocean, and the northern Atlantic Ocean (south of Greenland) as well as eastern parts of the Atlantic Ocean. The most notable cool temperature departures from average during September were in central and western Canada, where temperatures were 3.0°C (5.4°F) below average or less. Record cold September temperatures were observed in southwestern Canada.

ENSO-neutral conditions continued across the tropical Pacific Ocean during September 2018. According to NOAA's Climate Prediction Center, El Niño is favored to develop in the next few months and continue through the Northern Hemisphere winter (Southern Hemisphere summer). This forecast focuses on the ocean surface temperatures between 5°N and 5°S latitude and 170°W to 120°W longitude, called the Niño 3.4 region.

Warmer to much-warmer-than-average conditions engulfed much of the globe's surface during the first nine months of the year. Averaged as a whole, the January–September 2018 global land and ocean surface temperature was the fourth highest on record at 0.77°C (1.39°F) above average. This value is 0.24°C (0.43°F) less than the record high set in 2016 (+1.01°C / +1.82°F). Based on three simple scenarios, 2018 will likely end up among the five warmest years on record. Record warm temperatures were present across parts the Atlantic and Pacific Oceans, Gulf of Mexico, as well as across parts of North America, Africa, Europe, Asia, Australia, and New Zealand. No land or ocean areas had record cold January–September temperatures. However, near to much-cooler-than-average conditions were limited to Canada, the north-central contiguous U.S., parts of central Eurasia, much of the central and eastern tropical Pacific Ocean, and the northern Atlantic Ocean (off the southern coast of Greenland) and eastern Atlantic.

According to NCEI's Regional Analysis, five of six continents had a January–September temperature that ranked among the eight highest such period on record. Of note, Europe had its highest January–September on record at +1.86°C (+3.35°F), surpassing the previous record set in 2014 by +0.13°C (+0.23°F). Africa had its fifth highest year-to-date temperature, Asia and Oceania had their sixth highest on record and South America had its eighth highest. North America had its lowest year-to-date temperature departure from average since 2013.

The maps below represent precipitation percent of normal (left, using a base period of 1961–90) and precipitation percentiles (right, using the period of record) based on the GHCN dataset of land surface stations. As is typical, precipitation anomalies varied significantly around the world. Precipitation during September 2018 was generally drier than normal across the western half of the contiguous U.S., Canada, northeastern Brazil, much of western and central Europe, central Russia, parts of India, and Australia. Wetter-than-normal conditions were notable across the eastern half of the contiguous U.S, northern Mexico, parts of southern South America, northern Europe, western Africa, central Asia, and Japan. 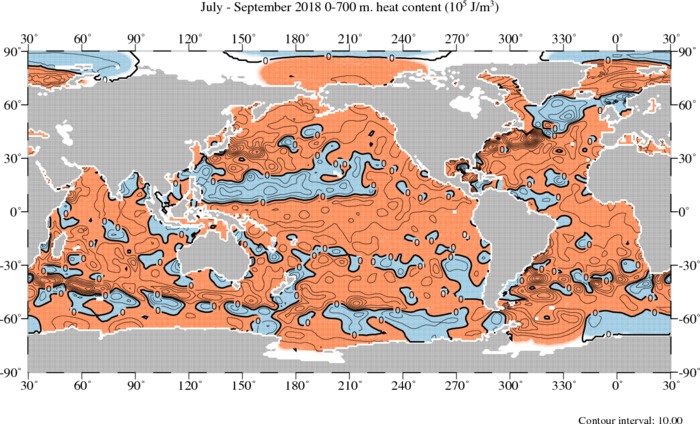 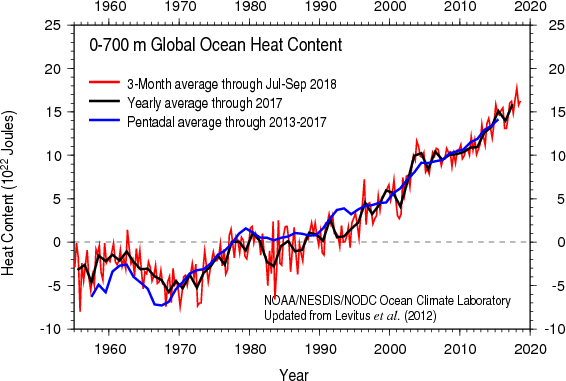 Global OHC for July–September 2018 was the highest July–September OHC in our records, which extend back to 1955. In fact, OHC for July-September 2018 is the third highest quarterly OHC in our records, with the two quarters with higher OHC than in July-September 2018 also occurring in the last 12 months. Overall, the latest quarterly OHC reveals widespread warmer than normal, i.e. the 1955-2006 mean, conditions, a situation observed since the end of 2016. As in the previous quarter, warmer than normal conditions, about 10x10^5 J/m^3, notably occupy the entire equatorial Pacific Ocean. Similarly, much higher, > 30x10^5 J/m^3, than normal OHC conditions are observed at high northern latitudes in Baffin Bay, the Greenland Sea, and the Barents Sea, and in the Gulf Stream/North Atlantic Current, the Brazil Current, and in the Kuroshio Current/Kuroshio Extension. In contrast, much cooler, < -20x10^5 J/m^3, than normal conditions continue to exist in the Subtropical western and central North Pacific Ocean. Much cooler than normal conditions persist in the subpolar North Atlantic Ocean south of Greenland and Iceland, and they extend eastward in the southern Norwegian Sea and the North Sea.