In the atmosphere, 500-millibar height pressure anomalies correlate well with temperatures at the Earth's surface. The average position of the upper-level ridges of high pressure and troughs of low pressure—depicted by positive and negative 500-millibar height anomalies on the July 2019 map—is generally reflected by areas of positive and negative temperature anomalies at the surface, respectively.

The July 2019 global land and ocean surface temperature departure from average was the highest for July since global records began in 1880 at 0.95°C (1.71°F) above the 20th century average. This value surpassed the previous record set in 2016 by 0.03°C (0.05°F). Nine of the 10 warmest Julys have occurred since 2005, with the last five years (2015–2019) ranking among the five warmest Julys on record. July 1998 is the only July from the 20th century to be among the 10 warmest Julys on record. July 2019 marked the 43rd consecutive July and the 415th consecutive month with temperatures, at least nominally, above the 20th century average. Julys 2016, 2017, and 2019 are the only Julys that had a temperature departure from average at or above 0.90°C (1.62°F). Climatologically, July is the globe's warmest month of the year. With July 2019 the warmest July on record, at least nominally, this resulted in the warmest month on record for the globe. 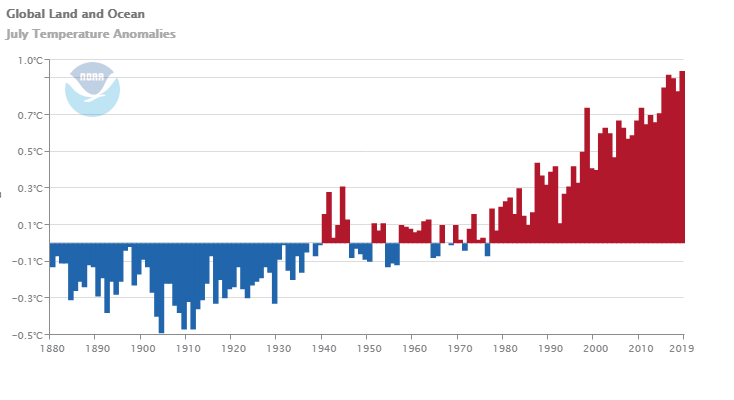 The month was characterized by warmer-than-average temperatures across much of the global land and ocean surfaces. Record-temperatures were present across parts of North America, southern Asia, the southern half of Africa, the northern Indian Ocean, the Atlantic Ocean, as well as across the western and northern parts of the Pacific Ocean. Near- to cooler-than-average conditions were limited to parts of western Canada, parts of the contiguous U.S., western and eastern parts of Russia, China, Indonesia, as well as parts of the North Atlantic Ocean, southern Indian Ocean, and parts of the southeastern and northwestern Pacific Ocean. No record cold temperatures were evident in the analysis for July 2019.

Regionally, North America, Africa, Asia, Oceania, the Caribbean region, the Hawaiian region, and the Gulf of Mexico had a July temperature that ranked among the ten warmest Julys on record. Of note, Africa had its warmest July on record at 1.65°C (2.97°F) above average. This value exceeds the previous record set in 2015 by 0.18°C (0.32°F). El Niño transitioned to ENSO-neutral during July 2019. According to NOAA's Climate Prediction Center, ENSO-neutral is most likely to continue through the Northern Hemisphere winter (Southern Hemisphere summer). This forecast focuses on the ocean surface temperatures between 5°N and 5°S latitude and 170°W to 120°W longitude, called the Niño 3.4 region.

The combined global land and ocean surface temperature for January–July 2019 was 0.95°C (1.71°F), tying with 2017 as the second highest January–July period since global records began in 1880. Only January–July 2016 was warmer at +1.09°C (+1.96°F). According to NCEI's global annual temperature ranking outlook, it is virtually certain that 2019 will end among the top five warm years. 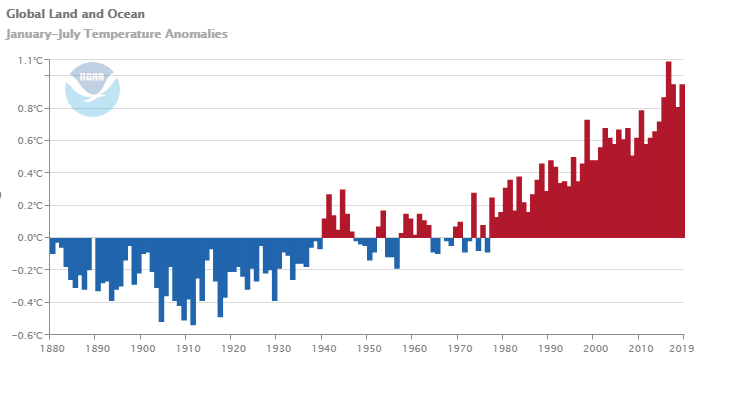 The first seven months of the year were characterized by warmer-than-average conditions across much of the world's land and ocean surfaces. The most notable warm temperature departures from average were present across parts of the Northern Hemisphere, specifically Alaska, northwestern Canada, and central Russia, where temperature departures from average were +2.0°C (+3.6°F) or higher. Meanwhile, the most notable cool temperature departures from average were present across much of the contiguous United States and southern Canada, where temperatures were at least 1.0°C (1.8°F) below average or cooler. Record warm January–July temperatures were present across the southern half of Africa and parts of North America, South America, Asia, Australia, New Zealand and its surrounding ocean, as well as parts of the western Pacific Ocean, Atlantic Ocean, and western Indian Ocean. No land or ocean areas had record cold temperatures for January–July 2019. The maps shown above represent precipitation percent of normal (left, using a base period of 1961–1990) and precipitation percentiles (right, using the period of record) based on the GHCN dataset of land surface stations. As is typical, precipitation anomalies during July 2019 varied significantly around the world. July precipitation was generally drier than normal across Hawaii, the western, southern, and southeastern parts of the contiguous U.S., southern South America, central Europe, north-central Russia, as well as Australia, and across some Pacific Islands. Wetter-than-normal conditions were notable across the northern contiguous U.S., southeastern Europe, parts of western and southern Asia, and southern Japan.