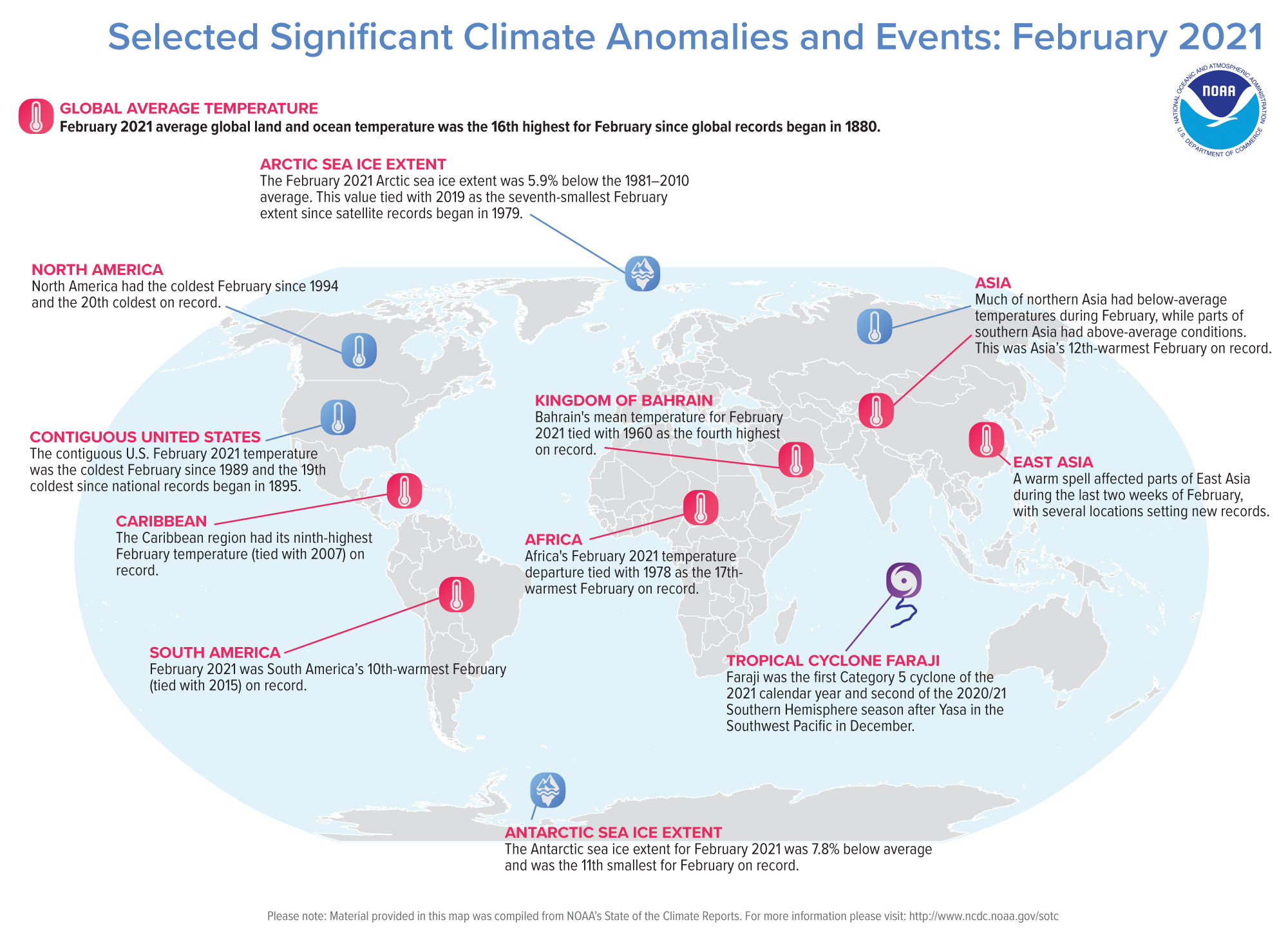 In the atmosphere, 500-millibar height pressure anomalies correlate well with temperatures at the Earth's surface. The average position of the upper-level ridges of high pressure and troughs of low pressure—depicted by positive and negative 500-millibar height anomalies on the February 2021 and December– February 2021 maps—is generally reflected by areas of positive and negative temperature anomalies at the surface, respectively.

During the month, La Niña continued to be present across the tropical Pacific Ocean during February, helping dampen the global temperatures. Meanwhile, a strong negative Arctic Oscillation (AO) was also present during the first half of the month. Similar to the ENSO affecting global temperatures, the AO can influence weather patterns across the mid-latitudes. In a negative AO phase, the jet stream weakens and meanders, creating larger troughs and ridges. This allows really cold Arctic air to reach the mid-latitudes. Across the U.S., a trough over the central U.S. combined with a ridge over northern Canada to produce a Rex block, which is a blocking pattern that disrupts the jet stream and leads to more prolonged weather patterns. The AO on February 10–11 was -5.3, which essentially ties February 5, 1978 and February 13, 1969 for the lowest February value on record. They were also among the lowest 35 values for any day of the year (>99.9 percentile). By February 26, it had rebounded to +2.7 (97th percentile). The February mean AO was -1.2. 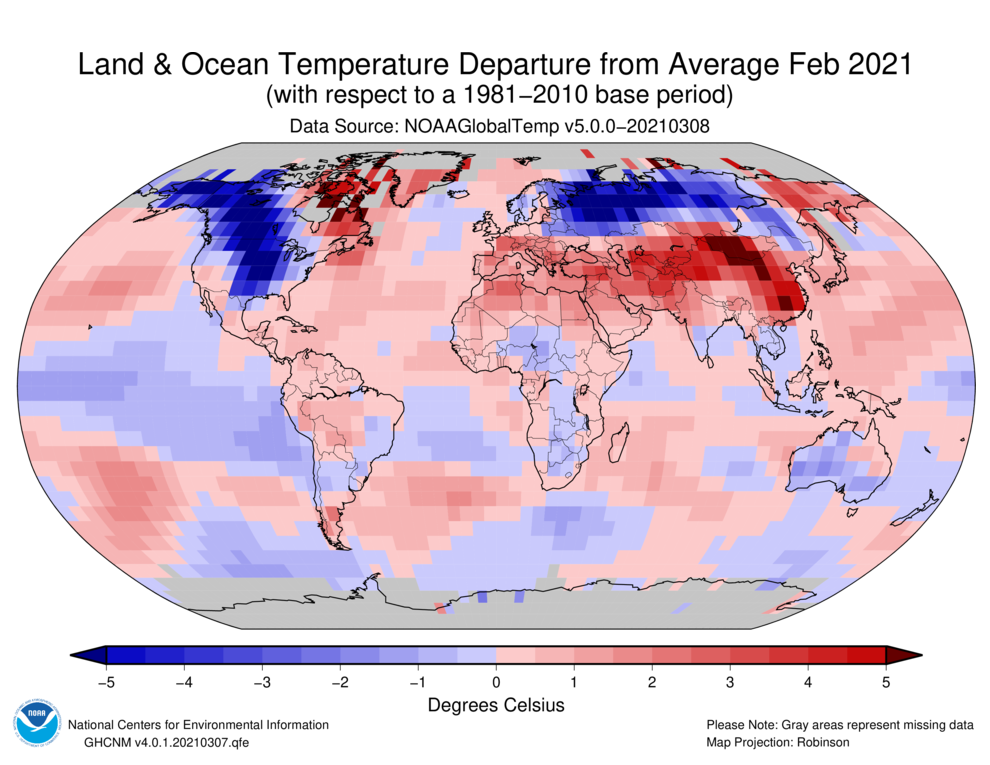 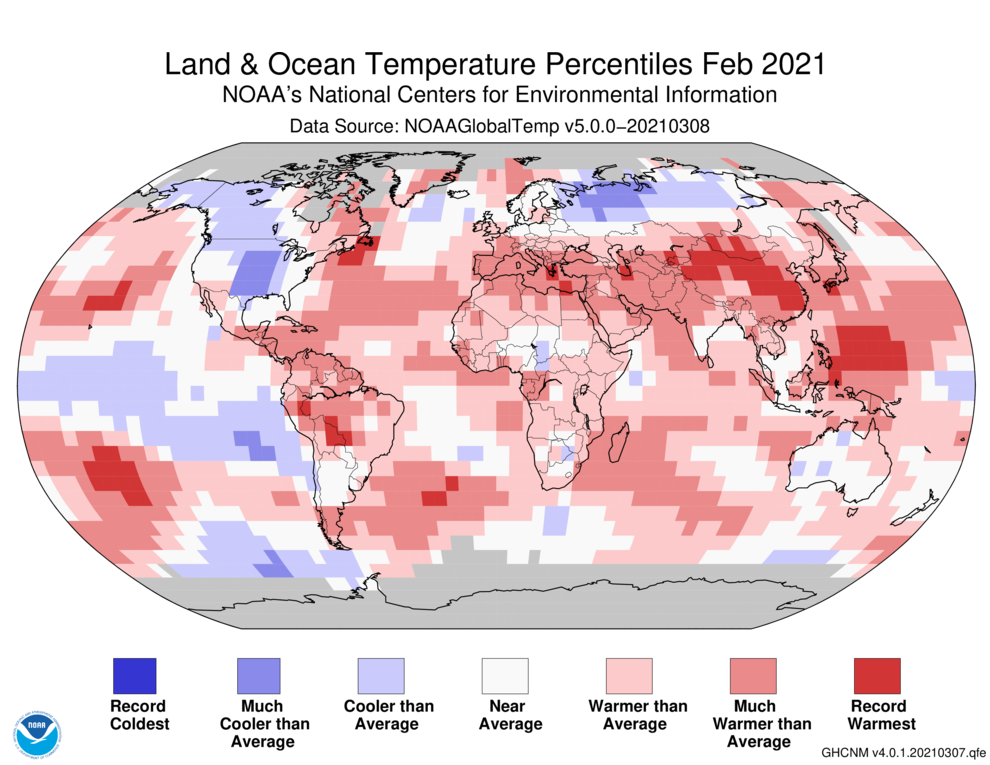 Regionally, South America and the Caribbean region had a top-10 warm February. While Asia's cold and warm temperatures resulted in its 12th warmest February on record.

Averaged as a whole, the February 2021 global land and ocean surface temperature was 0.65°C (1.17°F) above the 20th century average—the smallest February temperature departure since 2014. However, compared to all Februaries in the 142-year record, this was the 16th warmest February on record. February 2021 also marked the 45th consecutive February and the 434th consecutive month with temperatures, at least nominally, above the 20th century average. 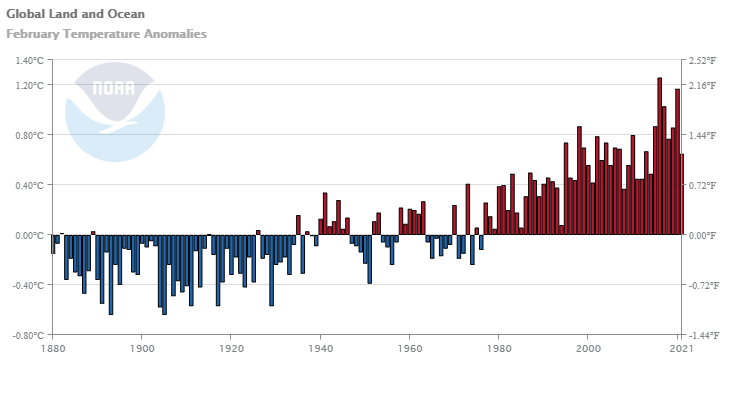 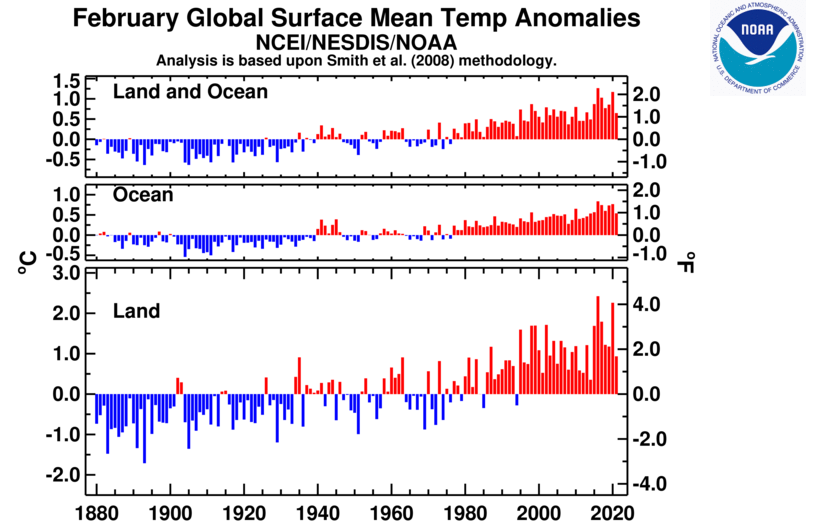 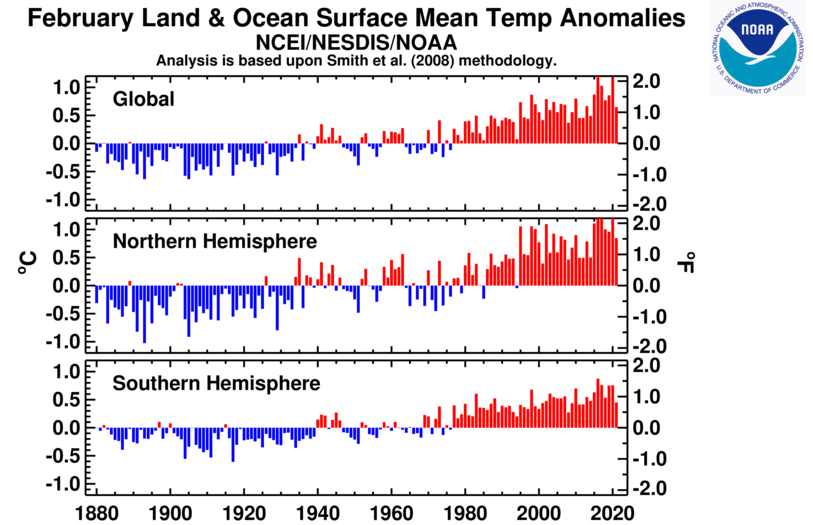 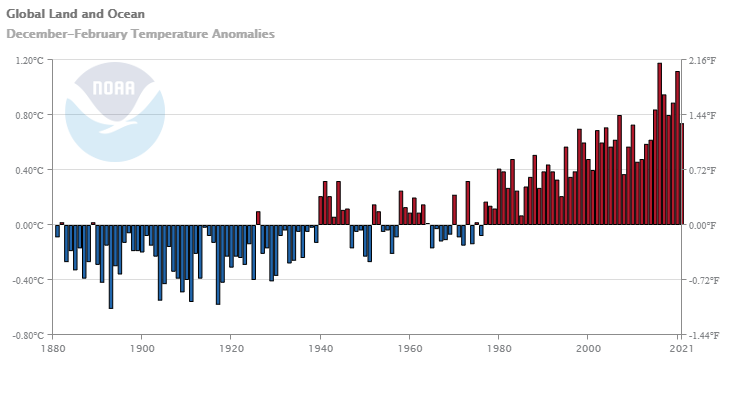 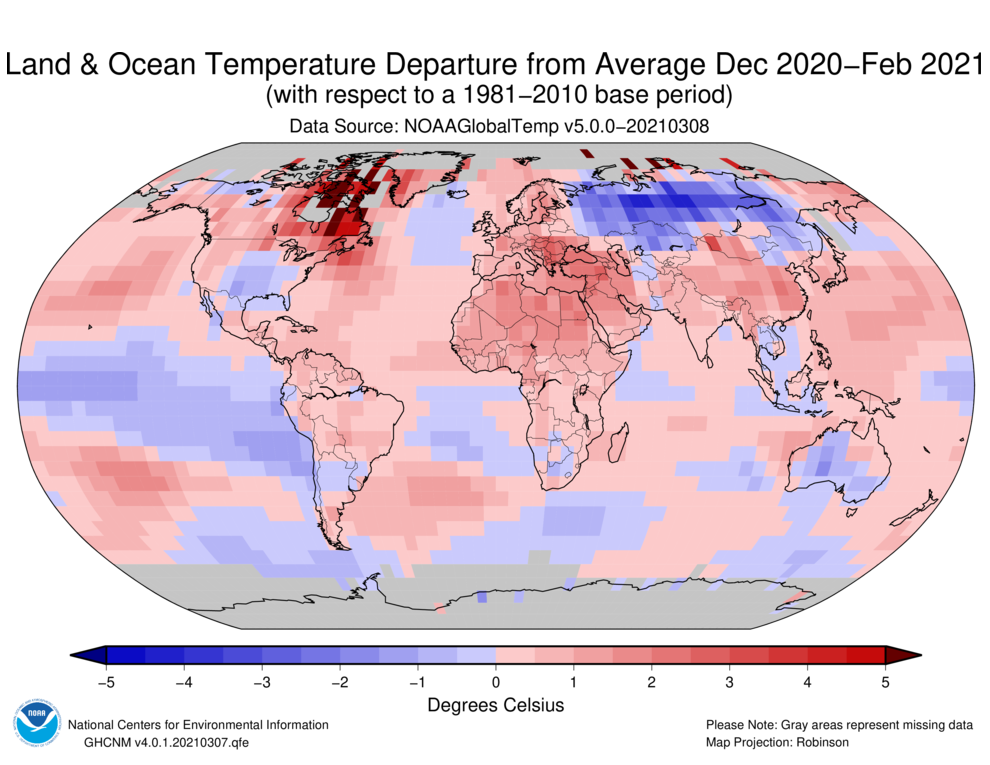 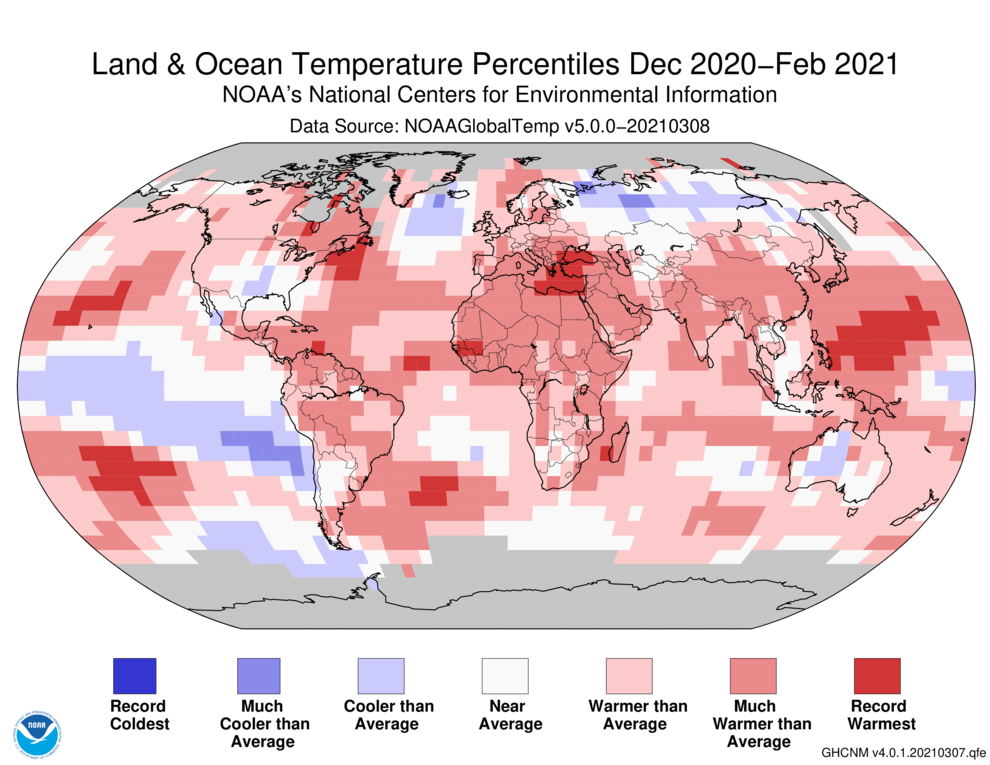 December 2020-February 2021 was the second-warmest such period for Africa and the ninth warmest for Europe. Meanwhile, Oceania had its smallest temperature departure since 2012 and Asia since 2013. 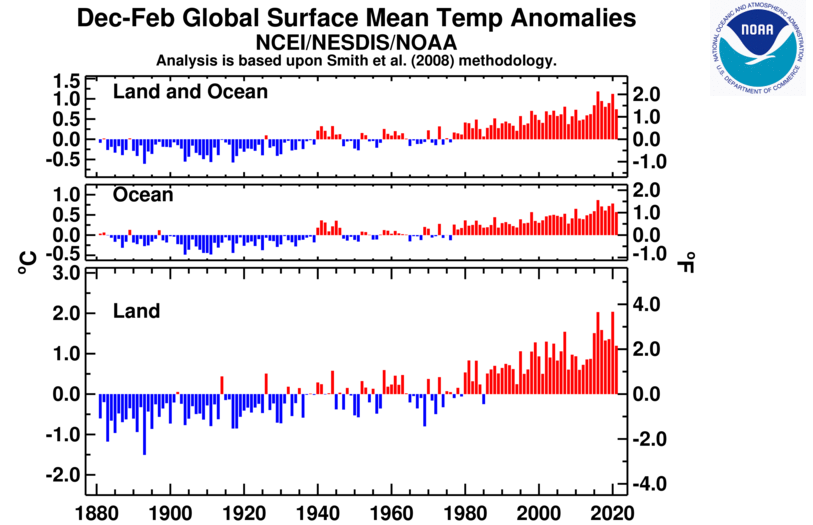 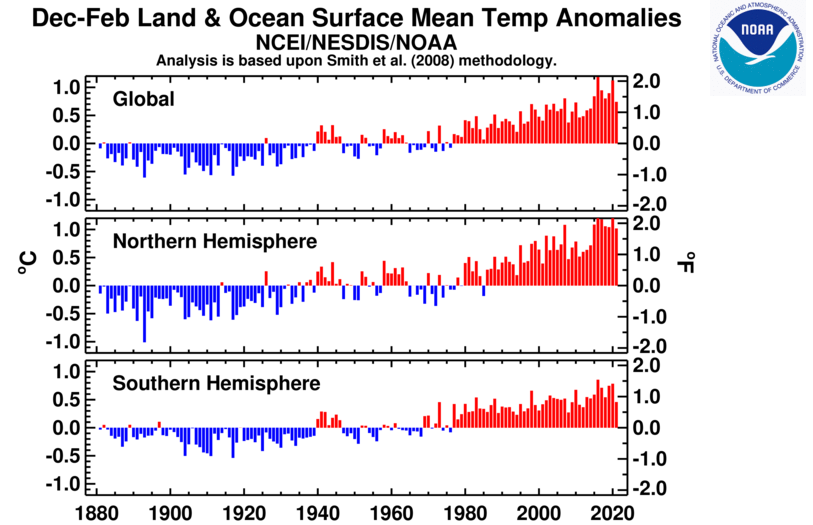 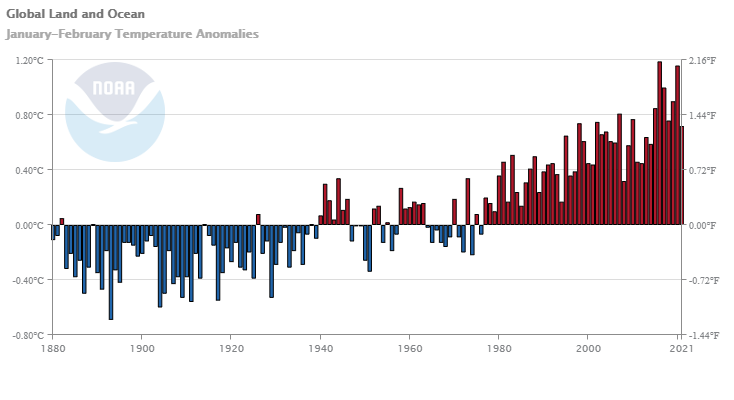 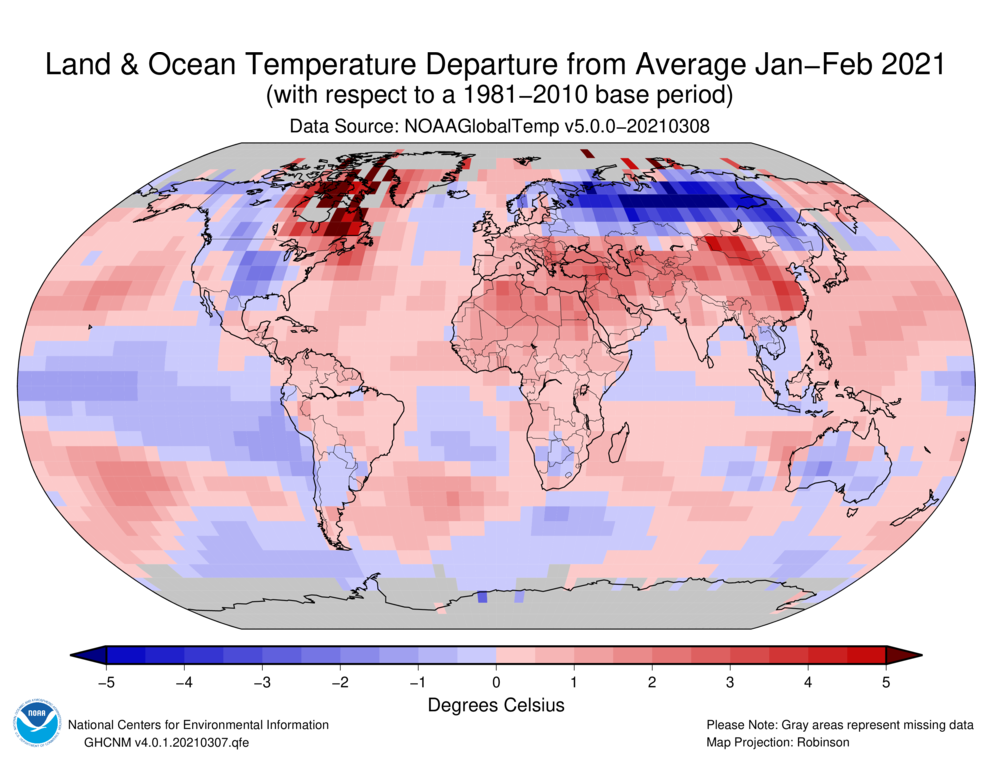 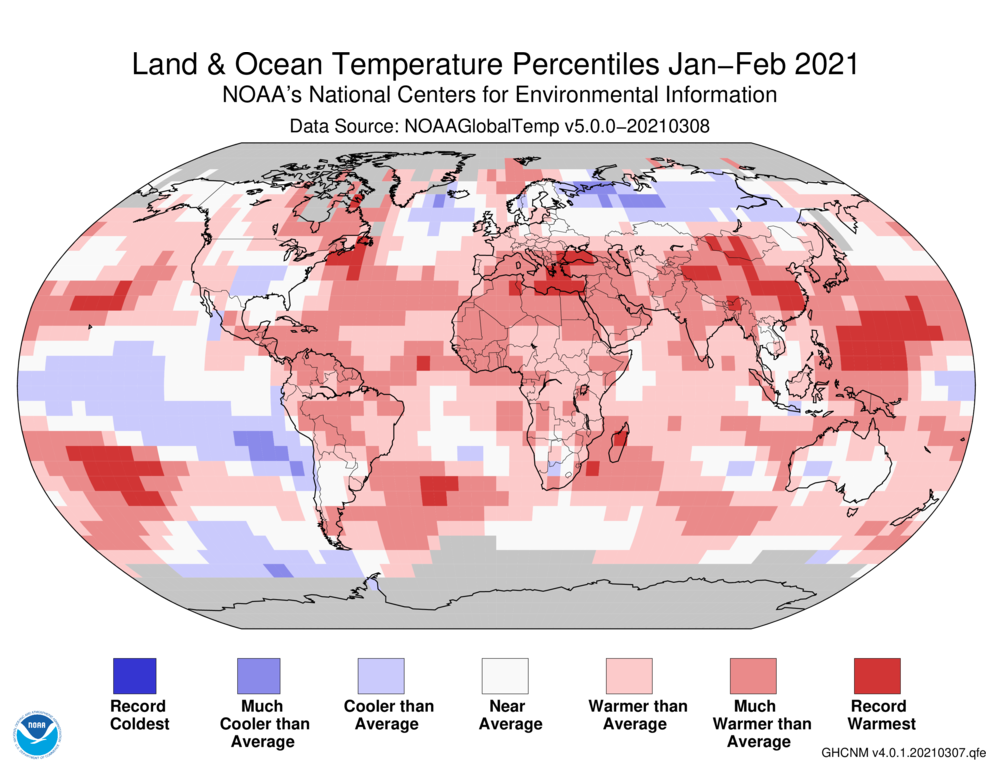 According to NCEI's Regional Analysis, Africa had its third warmest January–February in the 112-year record. However, no other continent had a top-10 warm or cold January–February period. Oceania had its smallest such period since 2012. 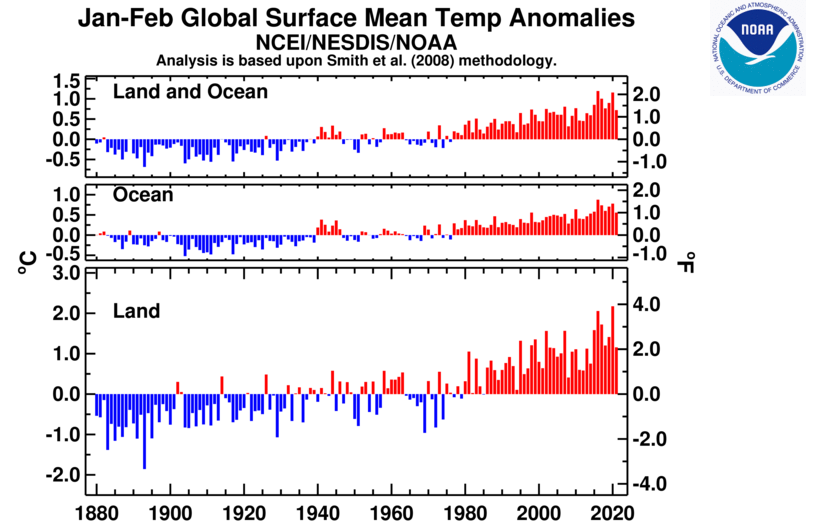 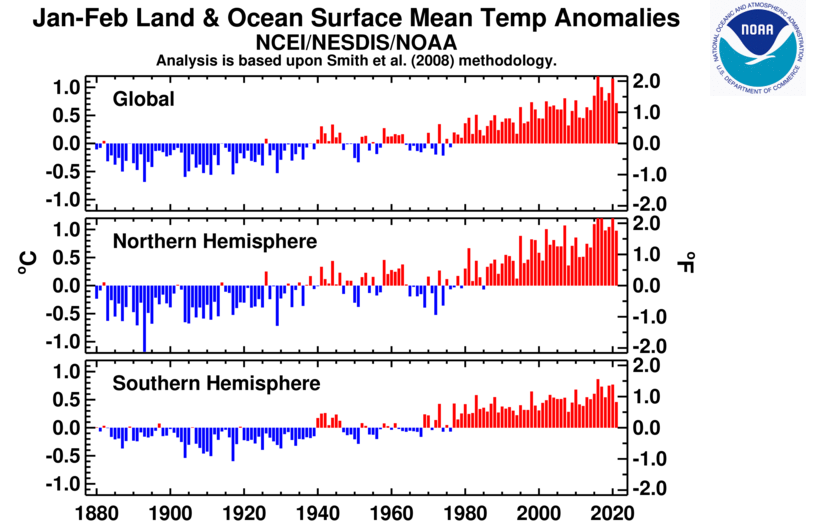 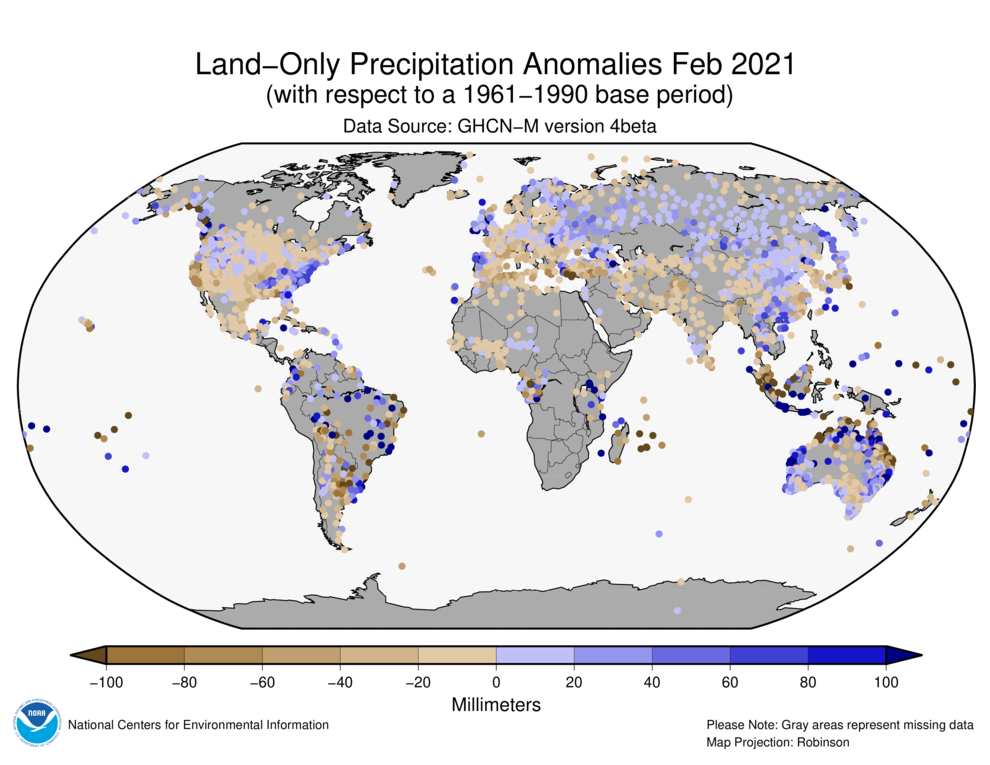 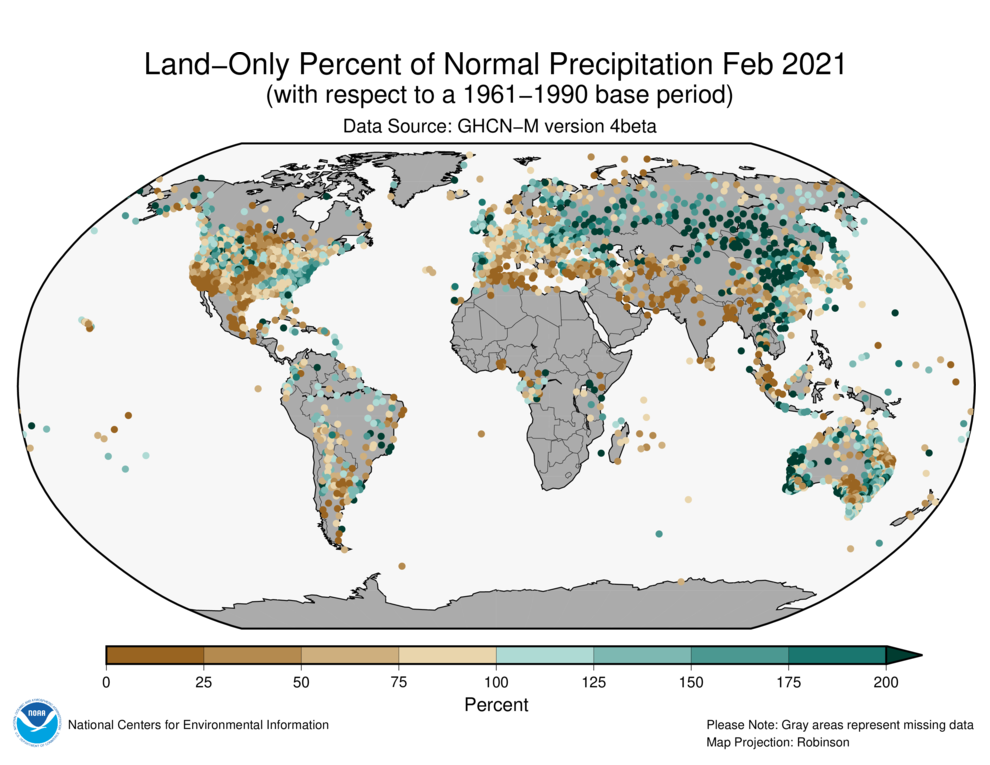 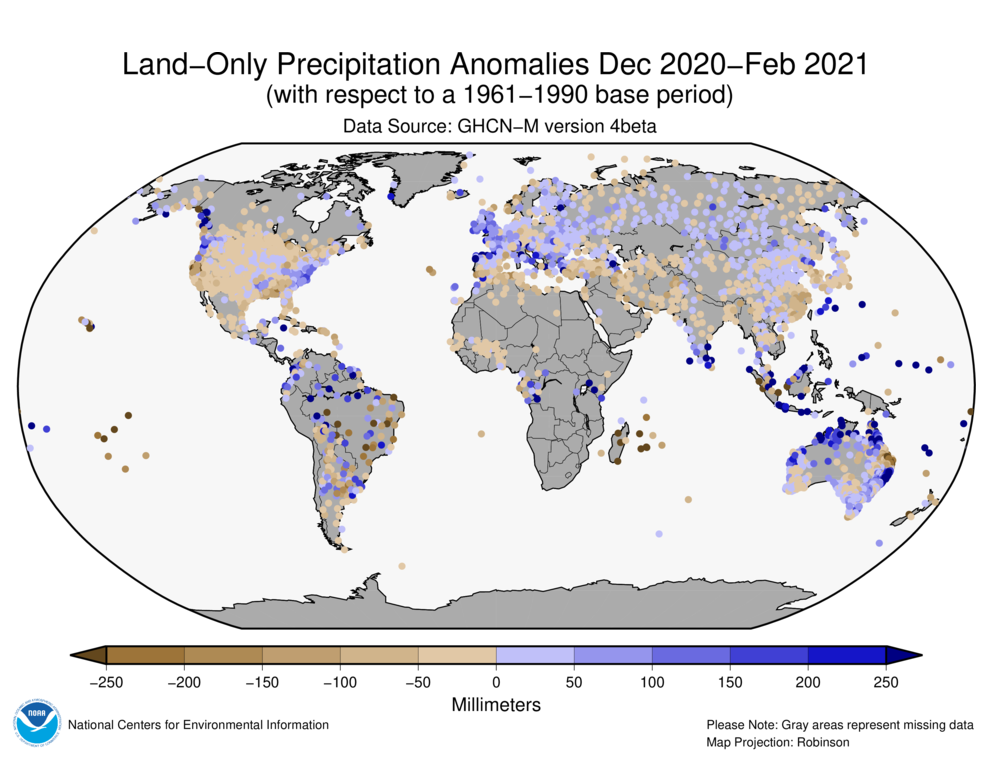 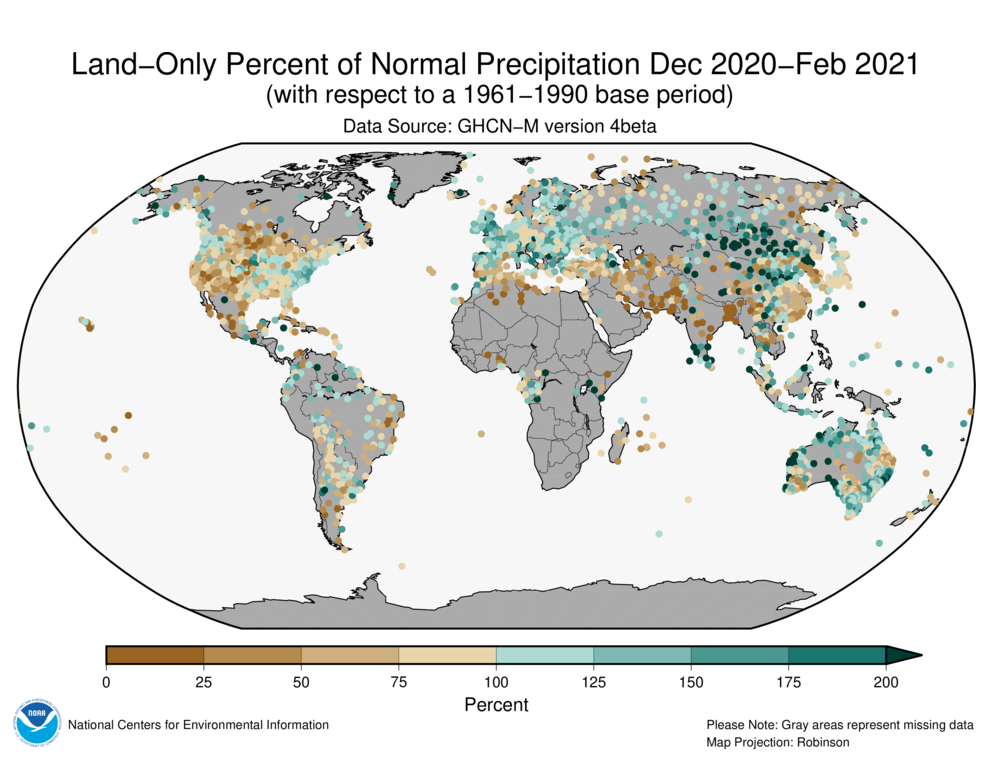 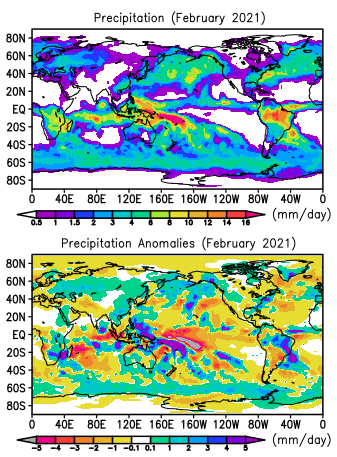 At the end of meteorological Northern Hemisphere winter and Southern Hemisphere summer the Inter-Tropical Convergence Zone (ITCZ) precipitation features sit approximately on the Equator in the Atlantic and Pacific in February, but further south in the Indian Ocean as seen in Fig. 1 (top panel). Over land the belt of intense rainfall is also further south over Africa, northern Australia and South America. Further poleward the mid-latitude ocean features in the Northern Hemisphere extend toward the east-northeast from the Asian and North America coasts to and into the continents on the other side of their respective oceans. In the Southern Hemisphere the mean precipitation circles the globe at 60°S, nearly unbroken.

The precipitation anomalies (Fig. 1, bottom panel) for February in the tropics are dominated again by La Niña, although there was some indication that this ENSO phenomenon might be weakening as forecast to occur over the next few months. The major negative anomaly is evident in the central Pacific along the Equator, as typical in La Niña, as is the general positive anomaly generally in the western Pacific and over parts of the Maritime Continent. Other features such as the excess rainfall in northern South America and in southern Africa are also typical with La Niña. Below we will summarize the la Niña effect for the recent three-month (Dec–Feb) period.

For February, the La Niña also continued to contribute to the drought conditions in the southwest U.S. California and Arizona were especially dry, with the middle Atlantic states tending toward wet conditions. However, Washington state and further north were hit with atmospheric rivers producing copious rain and snowfall there. Cold conditions in the south-central part of the U.S., including the big freeze in Texas, resulted in generally dry and below normal precipitation there. The La Niña circulation regime also helped provide conditions for heavy rainfall and floods associated with tropical cyclones in the South Indian Ocean, southern Africa, the Mozambique channel and Madagascar, the Philippine Islands and northeast Australia. Although usually relatively dry this time of year, northern Vietnam and southern China had flooding associated with an event that may have been a tropical cyclone system transitioning into a mid-latitude storm and showing up in the monthly anomaly pattern.

The mean precipitation pattern for the season (December–February) is shown in the top panel of Fig. 2, with the typical key features and general locations. The precipitation anomaly for the season is the middle panel and a La Niña climatological composite using multiple years during the 1979–2019 period is shown in the bottom panel. The three-month anomaly for this past season has a definite positive spatial correlation with the composite, especially in the tropics, indicating the importance of ENSO and the associated SST anomalies on forcing precipitation patterns. For the past three months the Niño 3.4 index (an SST anomaly in a central-east Pacific Ocean area along the Equator) has been a steady -1K, indicating moderate La Niña conditions. Key regional agreements between the composite and this season's anomalies include the close-in central Pacific (negative) and the western Pacific and the Maritime Continent (positive) regions, the positive-negative southwestward shift in the SPCZ, northern South America (positive), southern Africa (positive) and the Atlantic ITCZ (positive). Australia's composite is mostly positive, while the actual last three months is mor mixed. Further north both the composite and the recent anomalies extending from Hawaii to the U.S. west coast show precipitation deficits and these features extend into the southern tier of U.S. states and Mexico. Even the North Atlantic and North Central Pacific have general agreement.

The current La Niña is forecast to weaken over the next few months and we will monitor and describe the resulting changes.