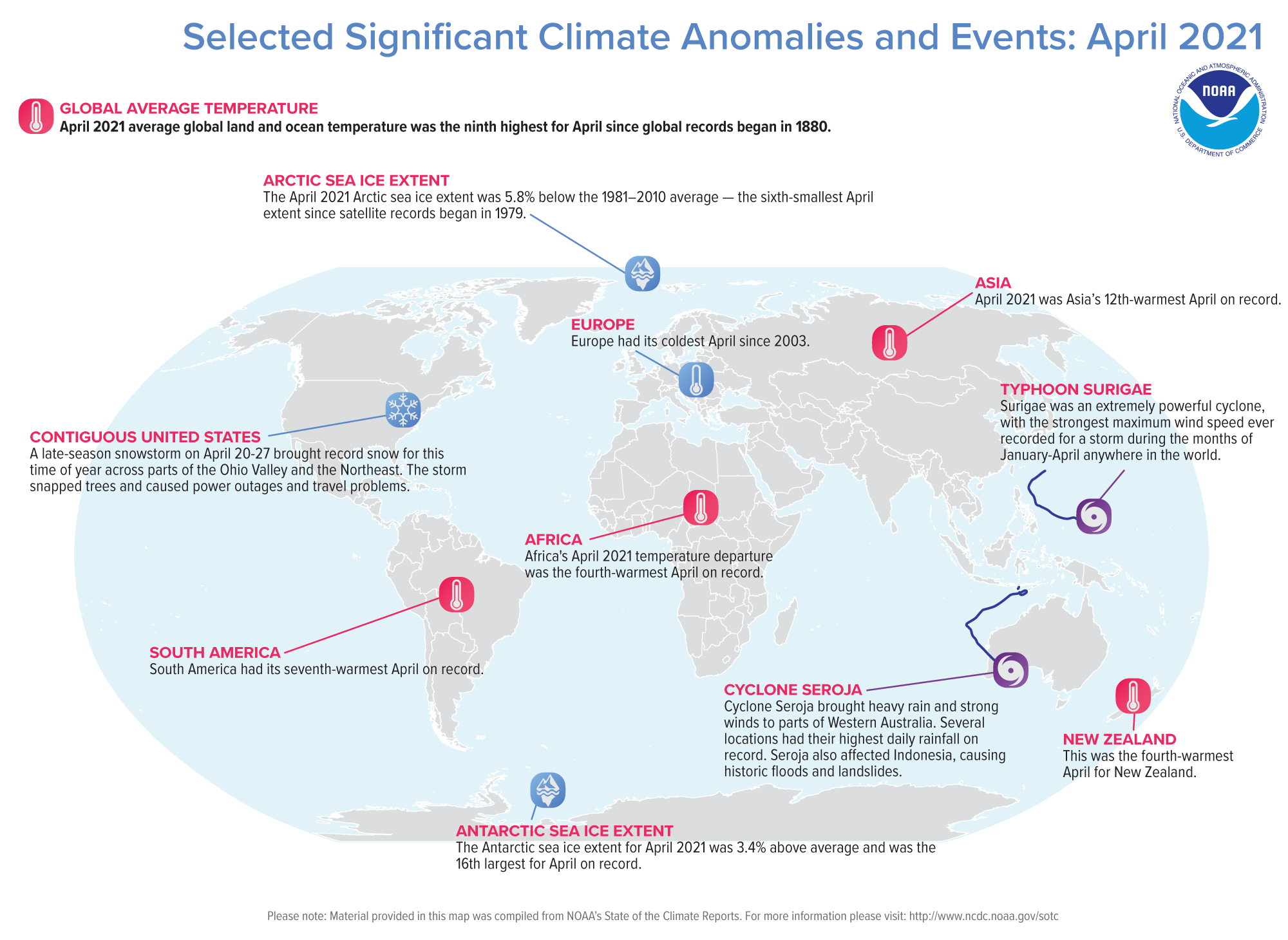 In the atmosphere, 500-millibar height pressure anomalies correlate well with temperatures at the Earth's surface. The average position of the upper-level ridges of high pressure and troughs of low pressure—depicted by positive and negative 500-millibar height anomalies on the April 2021 map—is generally reflected by areas of positive and negative temperature anomalies at the surface, respectively.

The April 2021 global surface temperature was 0.79°C (1.42°F) above the 20th century average of 13.7°C (56.7°F). This was the smallest value for April since 2013 and was the ninth warmest April in the 142-year record. April 2021 marked the 45th consecutive April and the 436th consecutive month with temperatures, at least nominally, above the 20th-century average. December 1984 was the last time a monthly temperature was below average. 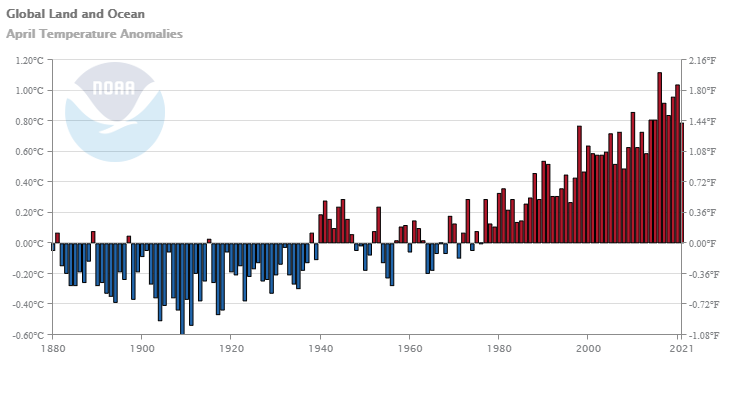 Meanwhile, near- to cooler-than-average April temperatures were present across much of North America, central Europe, parts of central Asia, Australia, and across the central and eastern tropical Pacific Ocean, and the southern oceans. However, no land or ocean areas had a record-cold April. 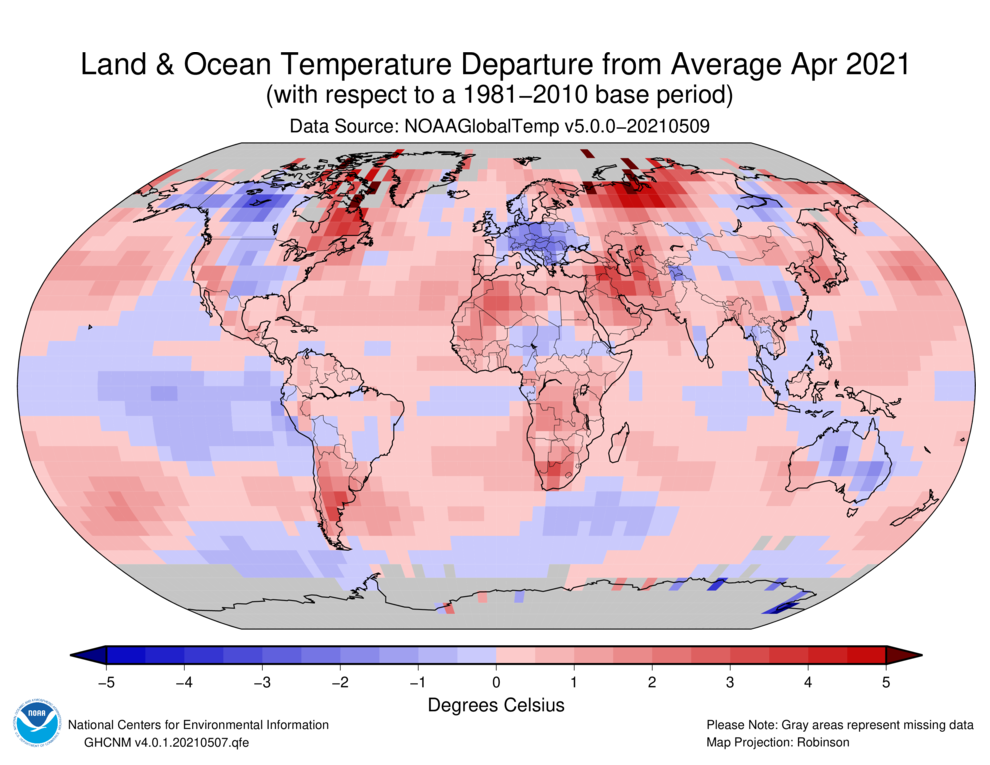 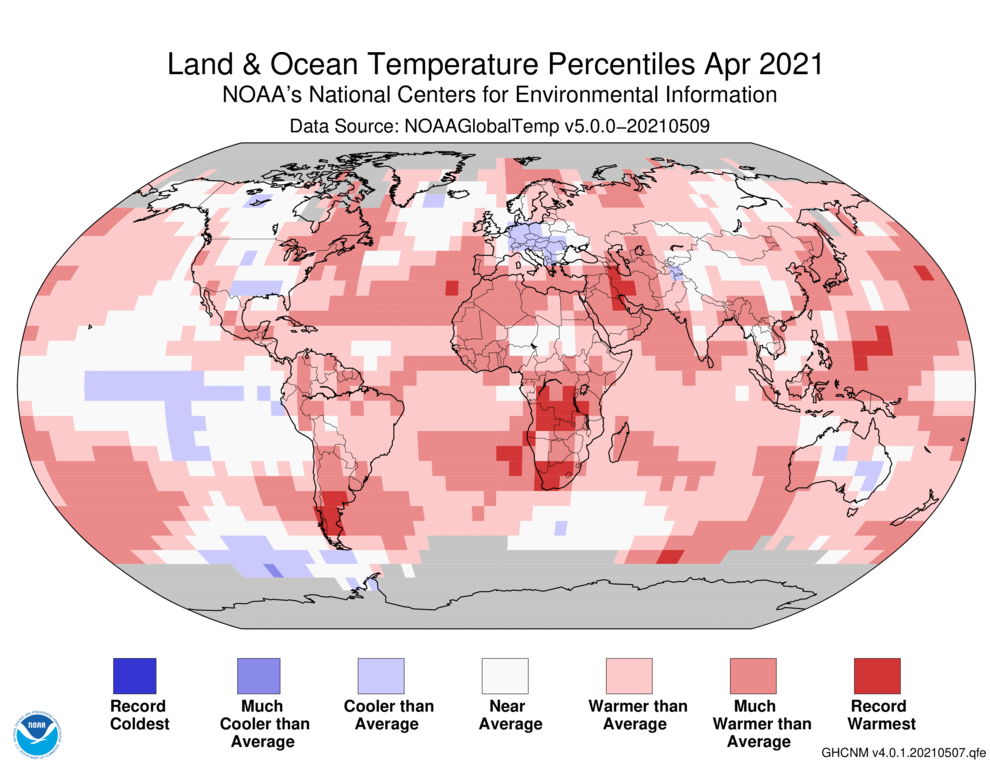 Regionally, Africa and South America had their fourth and seventh warmest April on record, respectively. Meanwhile, Europe had its coolest April since 2003. Several European countries had their coldest April in at least 20 years. 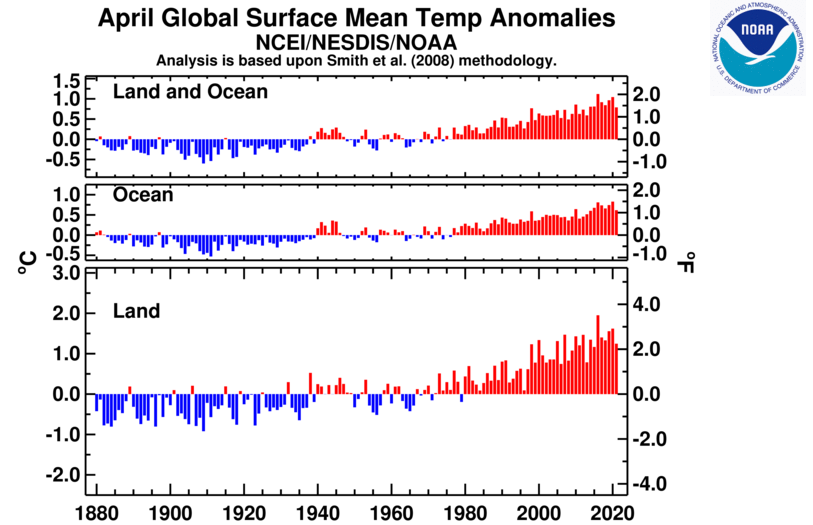 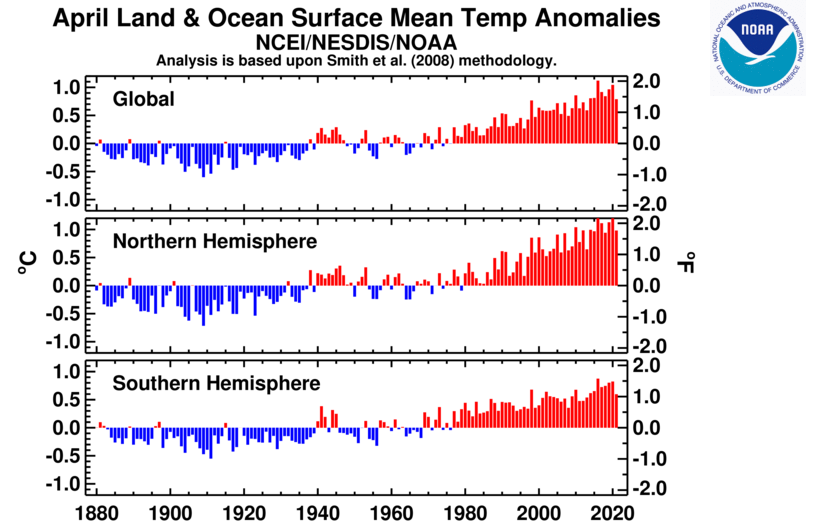 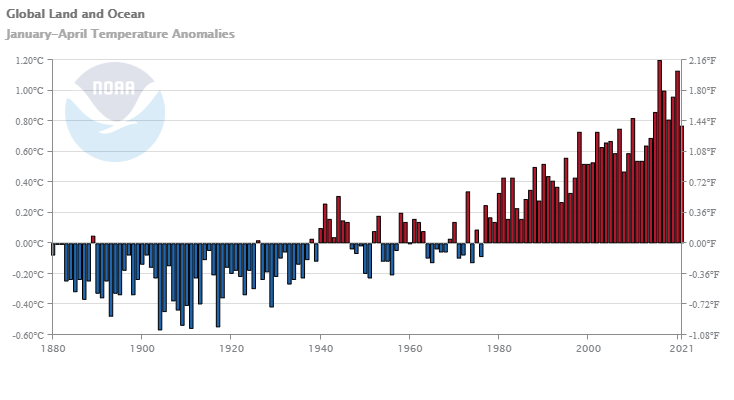 The January–April global surface temperature was 0.77°C (1.39°F) above the 20th century average—the smallest January–April temperature departure since 2014 and the eighth highest in the 142-year record. According to a statistical analysis done by NCEI scientists, the year 2021 is very likely to rank among the ten warmest years on record and has less than 4% chance to rank among the five warmest years on record. 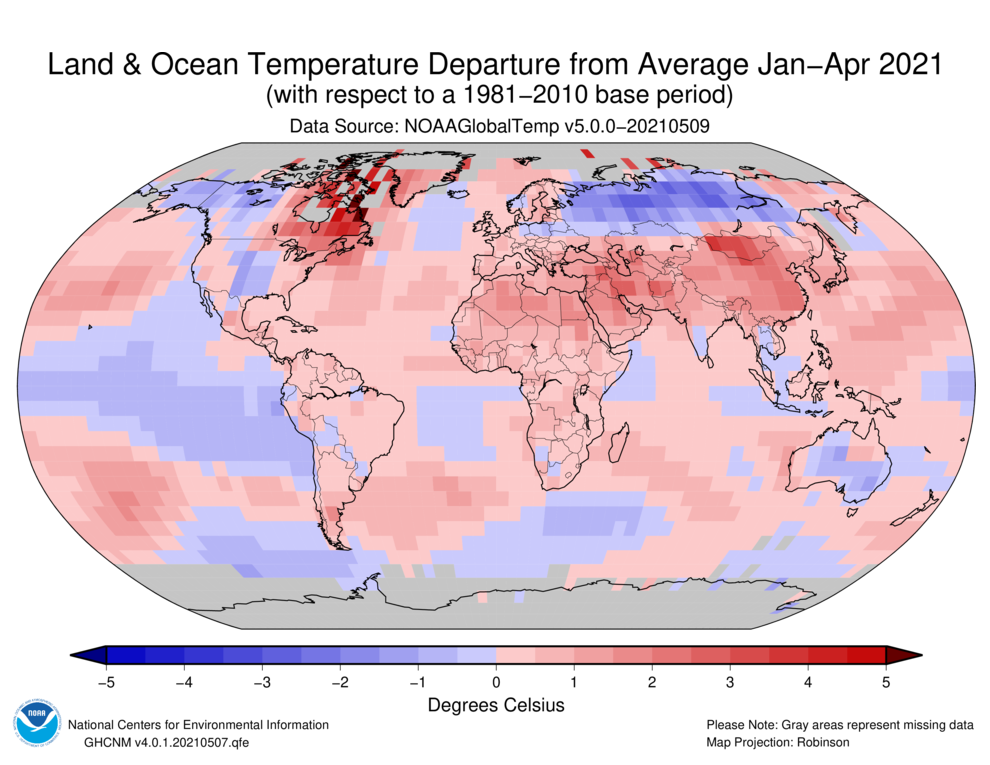 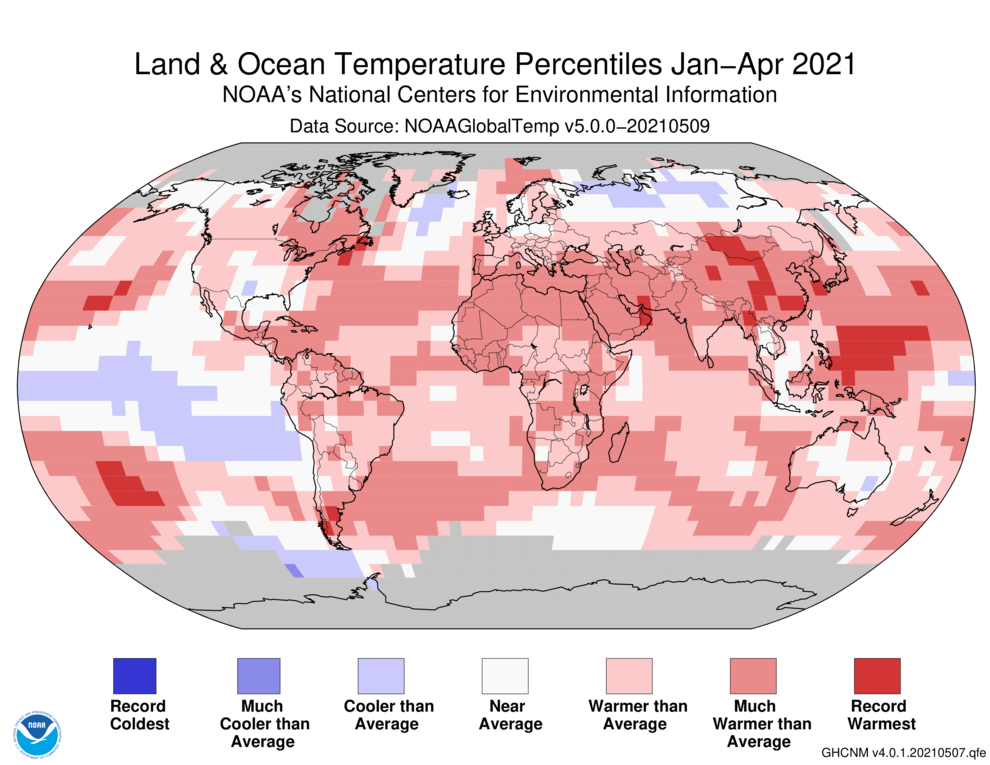 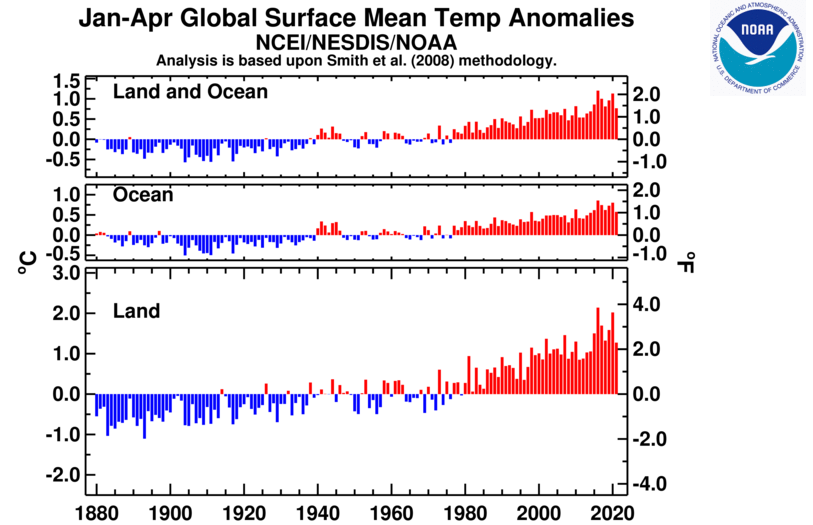 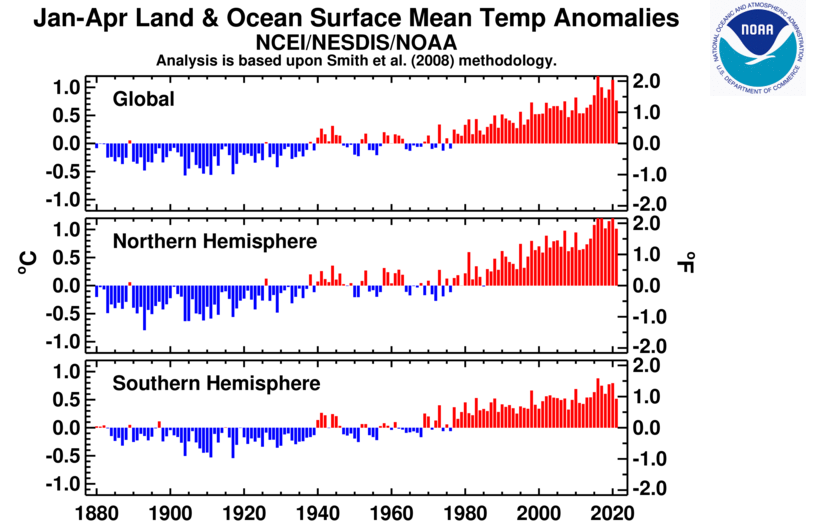 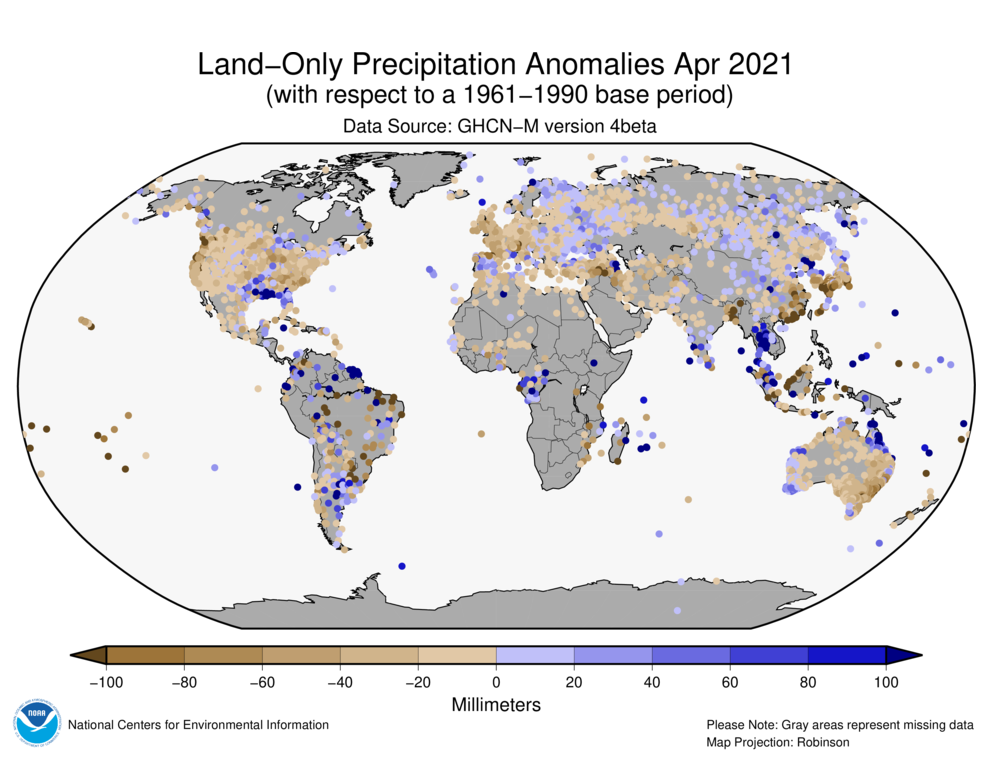 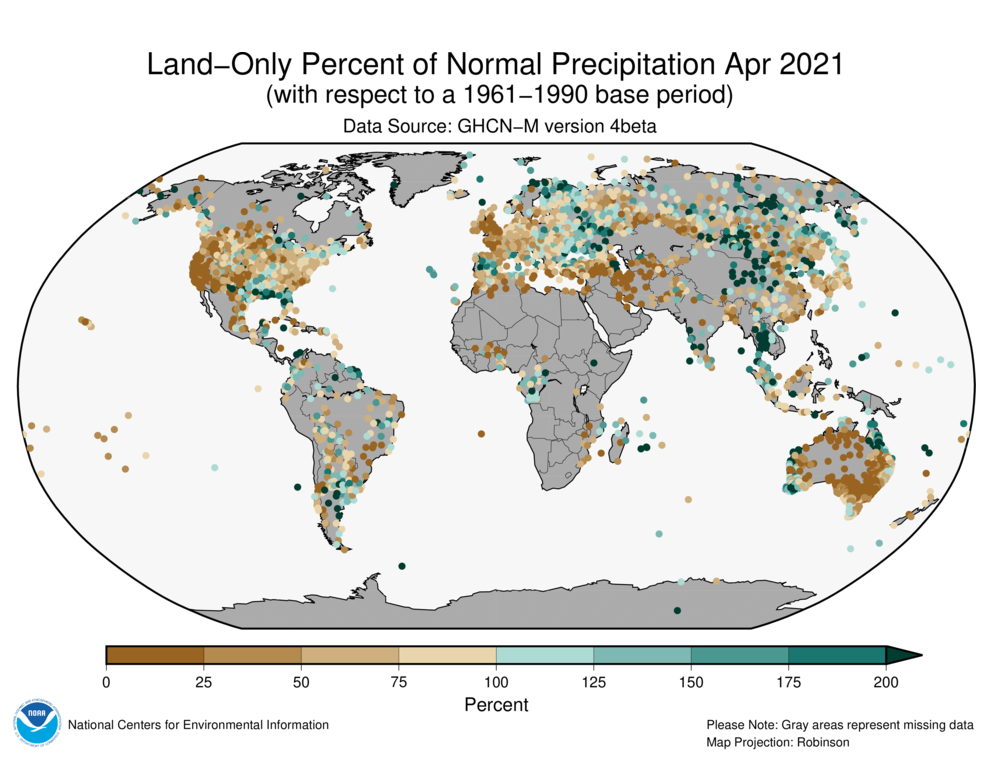 The maps shown above represent precipitation percent of normal (left, using a base period of 1961–1990) and precipitation percentiles (right, using the period of record) based on the GHCN dataset of land surface stations. As is typical, precipitation anomalies during April 2021 varied significantly around the world. April 2021 precipitation was generally drier than normal across parts of the western half of the contiguous U.S., Mexico, central and northern Europe, the Middle East, southwestern Russia, eastern China, Australia, and across parts of southern South America. Wetter-than-average conditions were present across parts the southeastern contiguous U.S., central Argentina, western and southeastern Russia, Mongolia, northern China, and southwestern and northeastern Australia. 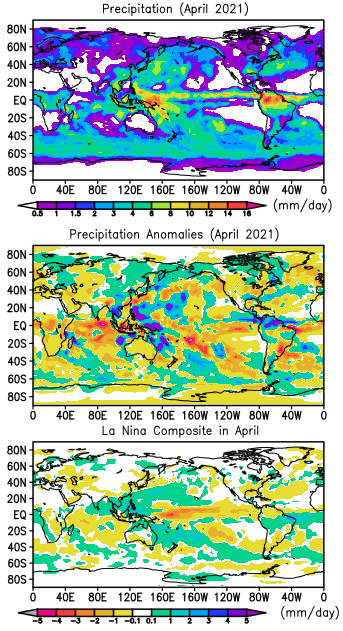 Another transition month has the major tropical rain zones moving north. Along with the seasonal changes the La Niña effect is still somewhat present (although definitely weakened) and the effect of tropical cyclones is evident, even though it is not summer in either hemisphere. The ITCZ stretches across the Pacific (Fig. 1, top panel) and in the eastern portions of the ocean the twin quasi-linear features of the double ITCZ can be discerned straddling the Equator, although the southern element of the double feature is very weak. In the monthly anomaly map (Fig. 1, middle panel) the north-of-the-Equator feature is stronger (more rainfall) than normal, while the south-side feature shows a negative anomaly.

The La Niña has gradually weakened with SST values in the central Pacific now only slightly below normal. The April composite for La Niña conditions (Fig. 1, bottom panel) has the typical rainfall deficit in the central Pacific and the surplus further west. The moderated La Niña for this April has weakened and less organized rainfall anomaly features along the Equator (Fig. 1, middle panel). In the central Pacific, where past months have shown an organized negative anomaly, a less organized pattern of smaller negative and some positive features is evident. Further west over the Maritime Continent, where positive anomalies dominated in previous months, a more disorganized pattern is seen, although the positive anomaly features were connected to floods in parts of Indonesia. The Indian Ocean retains a La Niña-type look. Over South America the ITCZ crossing the continent was active with above normal rainfall (opposite to the La Niña composite) and some associated flooding in Colombia and Peru and also in Central America. Further to the south a sharp negative feature helped to keep the local drought going. The African continent is dominated by negative anomalies, especially in central Africa, with small, positive features along the southeast coast and over part of Somalia.

Although Australia was relatively dry, its periphery was touched by tropical cyclone activity along the northeast and western coasts. Tropical cyclones also contributed rainfall to the Mozambique/Madagascar region and even the positive anomaly in Indochina had a significant contribution from a system that started as a short-lived tropical depression in the Bengal Sea near the beginning of the month that is extremely unusual there at this time of year. However, the most intense positive anomaly on the map is the curved feature over and to the east of the Philippines. This feature indicates the track of Super Typhoon Surigae from about 13–22 April as it approached the Philippines and then re-curved to the northeast, just brushing the islands. This was the strongest storm ever in the Northern Hemisphere before May and left its mark on the rainfall map, although it did not significantly affect any land.

Although the La Niña in the Pacific has moved more toward neutral conditions, it still seemed to have an effect on North America with relative dry conditions across most of the continent this month, similar to the composite. This result helped to intensify the drought conditions in much of the southwest and west of the U.S. However, a clear exception to this La Niña pattern is the small strip of positive anomalies along the Gulf of Mexico coast associated with flooding in Houston at the end of the month and further east.

Over the North Atlantic the springtime storm track was further south than normal with a positive anomaly running northeastward from Florida and a negative anomaly area further north extending into Western Europe, where drought conditions held in several areas. Western Europe also recorded its coldest April in decades, giving the region a cool and dry April.

NOAA National Centers for Environmental Information, State of the Climate: Monthly Global Climate Report for April 2021, published online May 2021, retrieved on May 23, 2022 from https://www.ncei.noaa.gov/access/monitoring/monthly-report/global/202104.