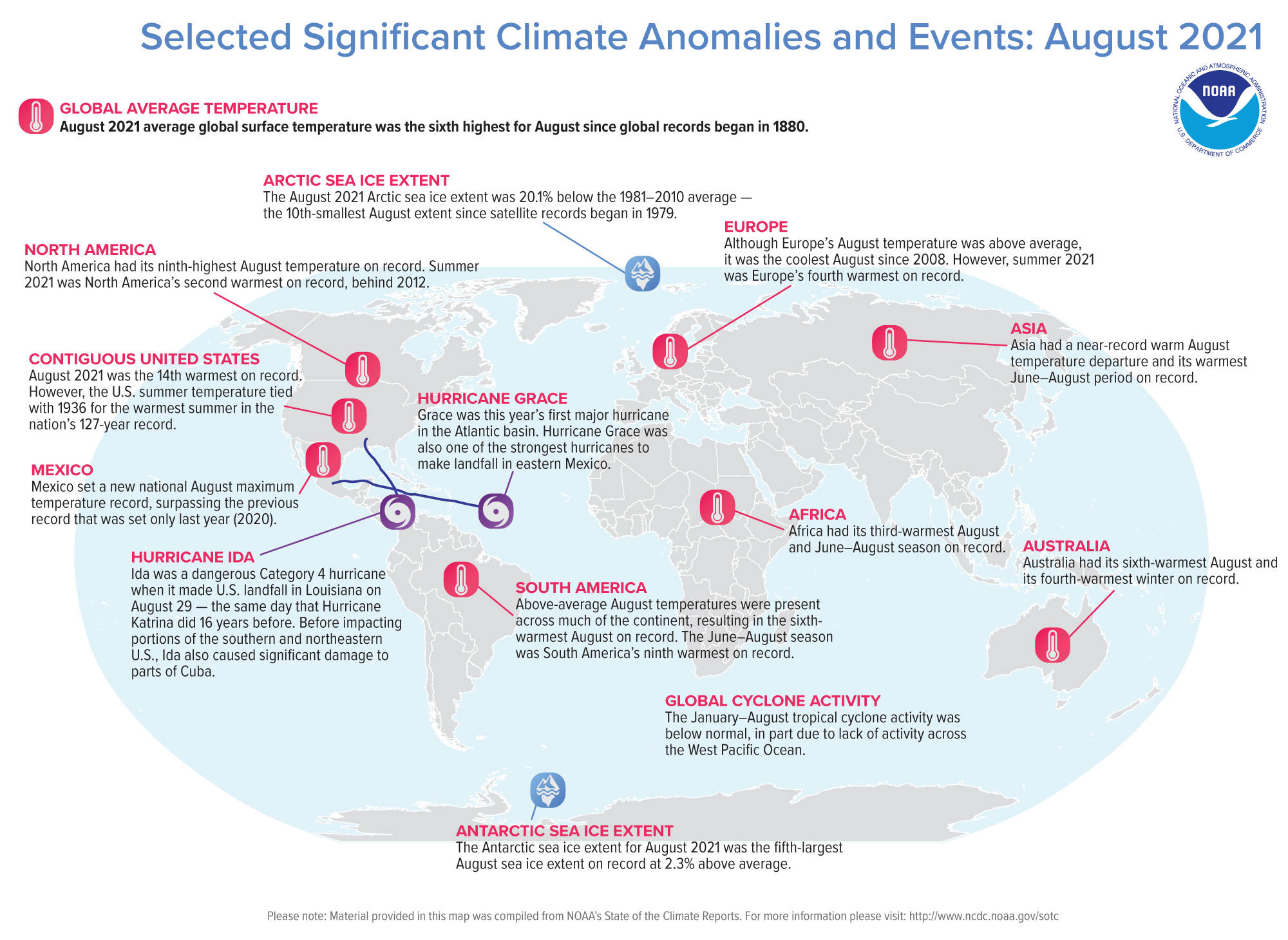 In the atmosphere, 500-millibar height pressure anomalies correlate well with temperatures at the Earth's surface. The average position of the upper-level ridges of high pressure and troughs of low pressure—depicted by positive and negative 500-millibar height anomalies on the August 2021 and June-August 2021maps, is generally reflected by areas of positive and negative temperature anomalies at the surface, respectively. 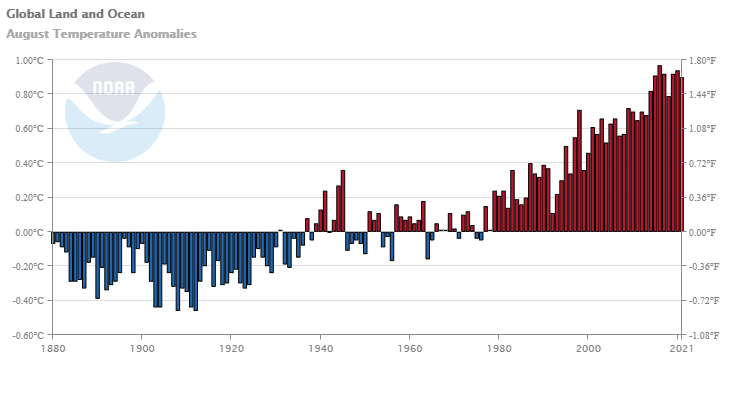 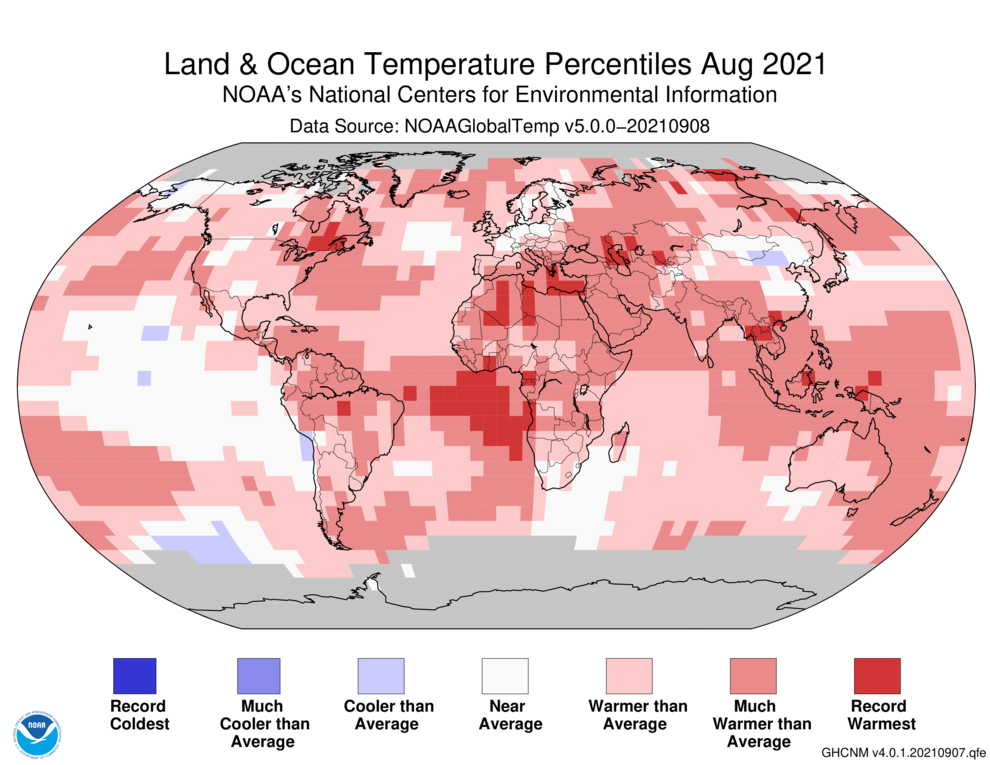 Regionally, Asia had its second warmest August on record at 1.56°C (2.81°F) above average, which is only 0.04°C (0.07°F) less than the record warm August set in 2016. The Kingdom of Bahrain, located in the Persian Gulf, stated that the nation had its warmest August since national records began with a mean temperature that was 1.7°C (3.1°F) above average.

South America, Africa, and Oceania had a top six warm August and North America had its ninth warmest August on record. Although Europe had an August temperature that was above the 1910–2000 average, it was the coolest since August 2008. The European country of Austria had an August temperature departure of 1.8°C (3.2°F) below the 1991–2020 average—this resulted in Austria's coolest August since 2014.

During the second week of August, an intense heat wave impacted parts of southern Europe and northern Africa, with some locations observing maximum (daytime) temperatures of 45.0°C (113.0°F) or higher. According to preliminary reports, Sicily, Italy saw maximum temperatures rise to 48.8°C (119.8°F) on August 11, 2021, which would become, if verified, Europe's highest maximum temperature on record. This new value would surpass the current record of 48.0°C (118.4°F) that was set in two different cities in Greece on July 10, 1977. Also, of note was the temperature of 49.0°C (120.2°F) set in Tunis, the capital of Tunisia. Once verified, this would be Tunis' highest maximum temperature for the month of August, surpassing the previous record of 46.8°C (116.2°F) set in 1982. 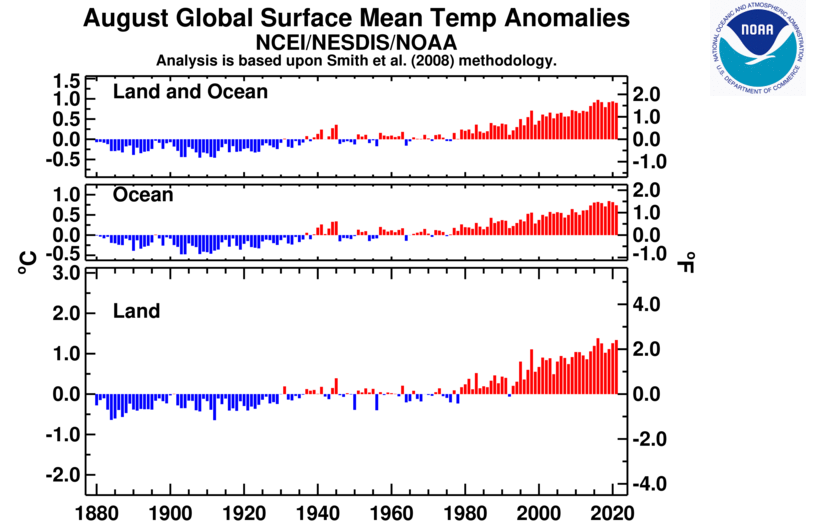 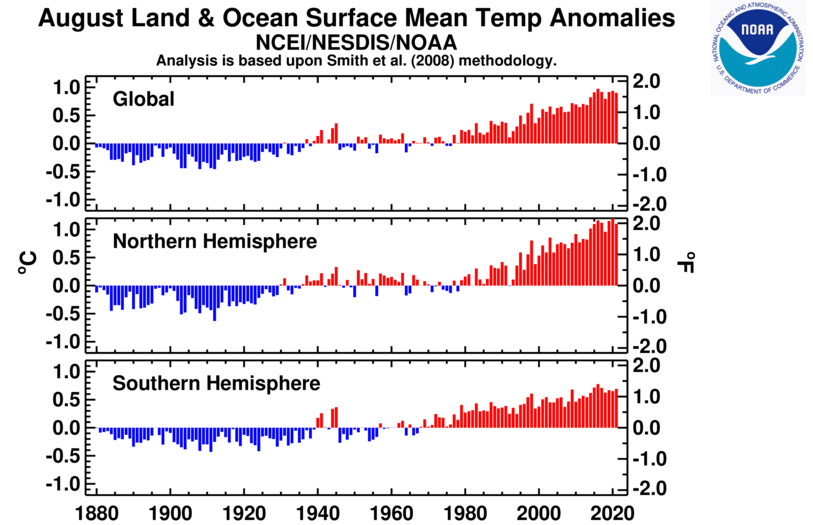 The June–August seasonal global surface temperature departure of +0.90°C (+1.62°F) was the fourth highest for the three-month season on record. Only June–August of 2016, 2019, and 2020 were warmer. During the three-month period, temperatures were much above average across much of the land surfaces across the globe, resulting in the record-warm global land-only surface temperature for June–August at 1.38°C (2.48°F) above average. This value exceeded the previous record set in 2016 by 0.13°C (0.23°F). Parts of the western Pacific, the Atlantic, and Indian oceans also had much-above-average August temperatures. 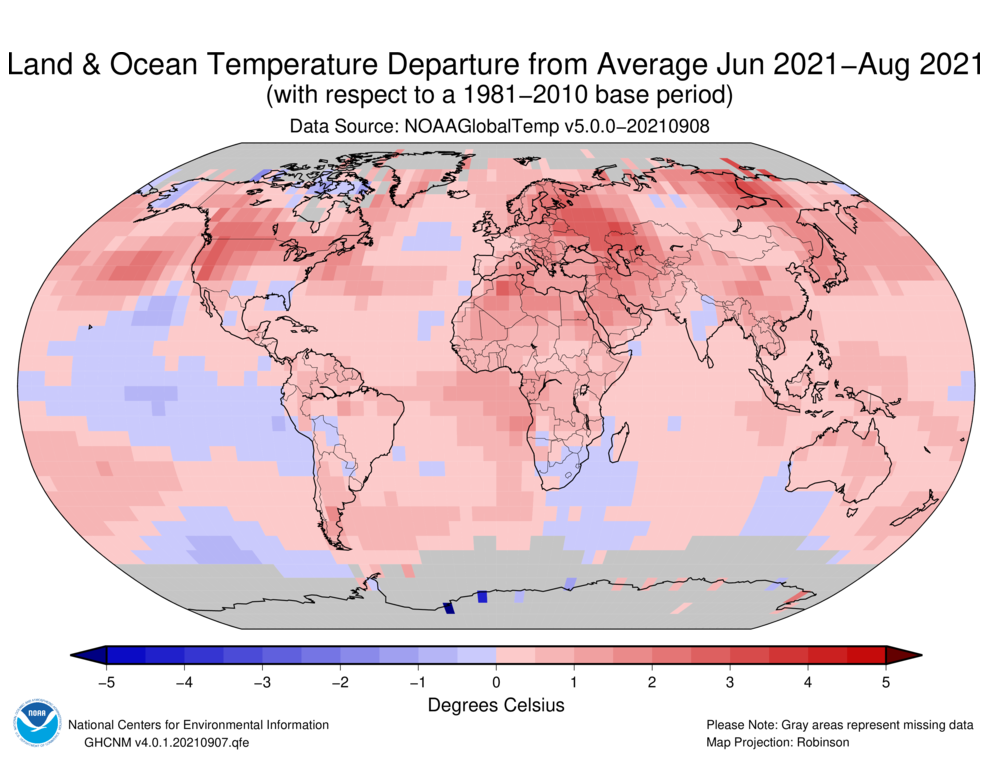 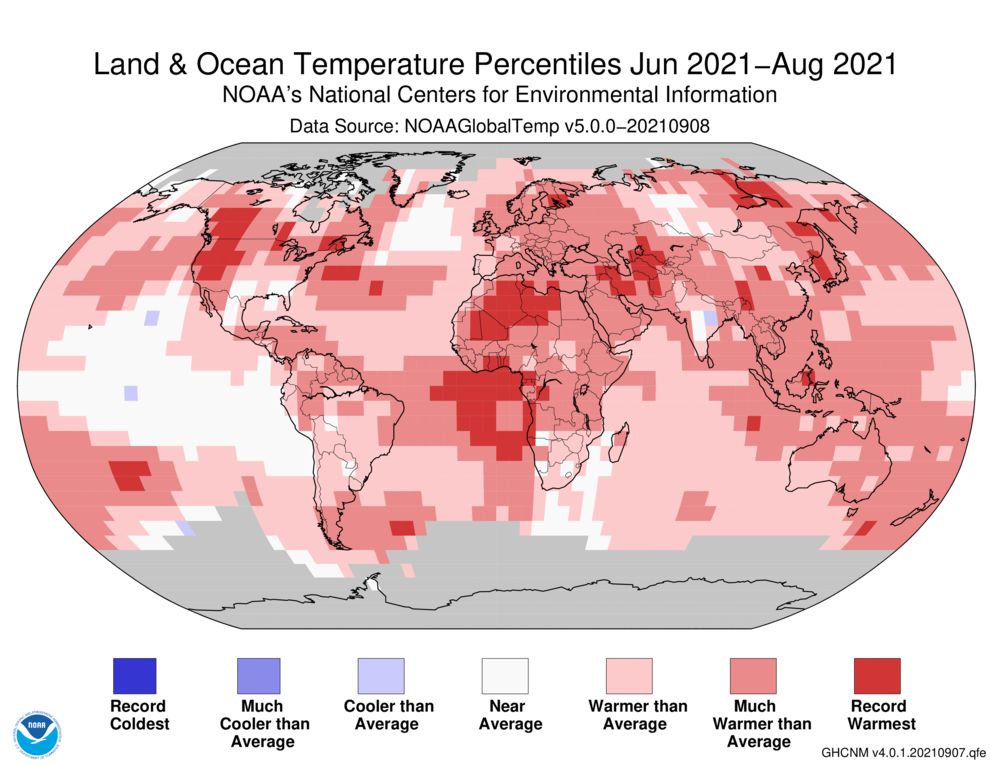 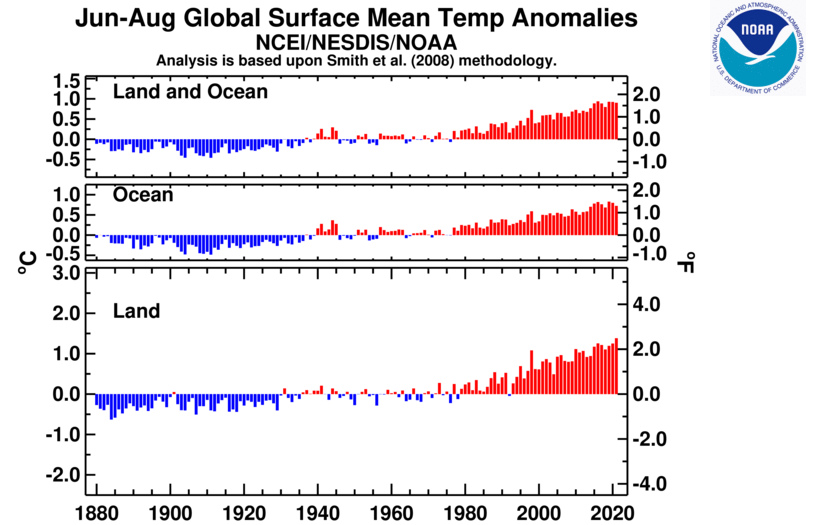 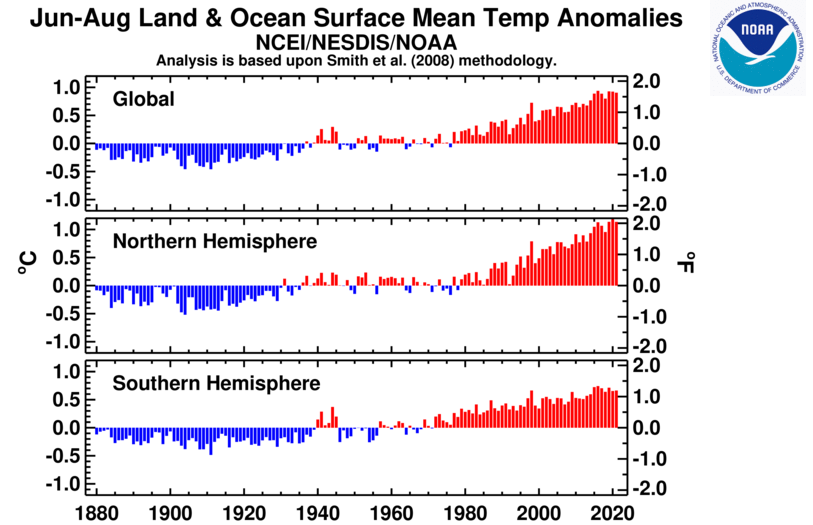 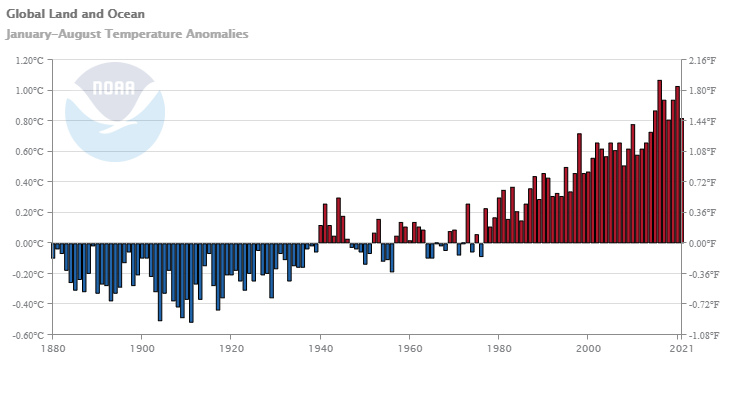 Much-above-average temperatures were present across parts of North America, South America, Africa, southern Asia, as well as the Atlantic Ocean, northern and western Pacific Ocean, and parts of the Indian Ocean. Record-warm January–August temperatures were observed across parts of Africa, southern Asia, the Pacific, and Atlantic oceans. Near- to cooler-than-average conditions were present across the central and eastern tropical Pacific Ocean, the North Atlantic Ocean, northern Russia, and parts of the southern oceans. However, no land or ocean areas had a record-cold January–August temperature. 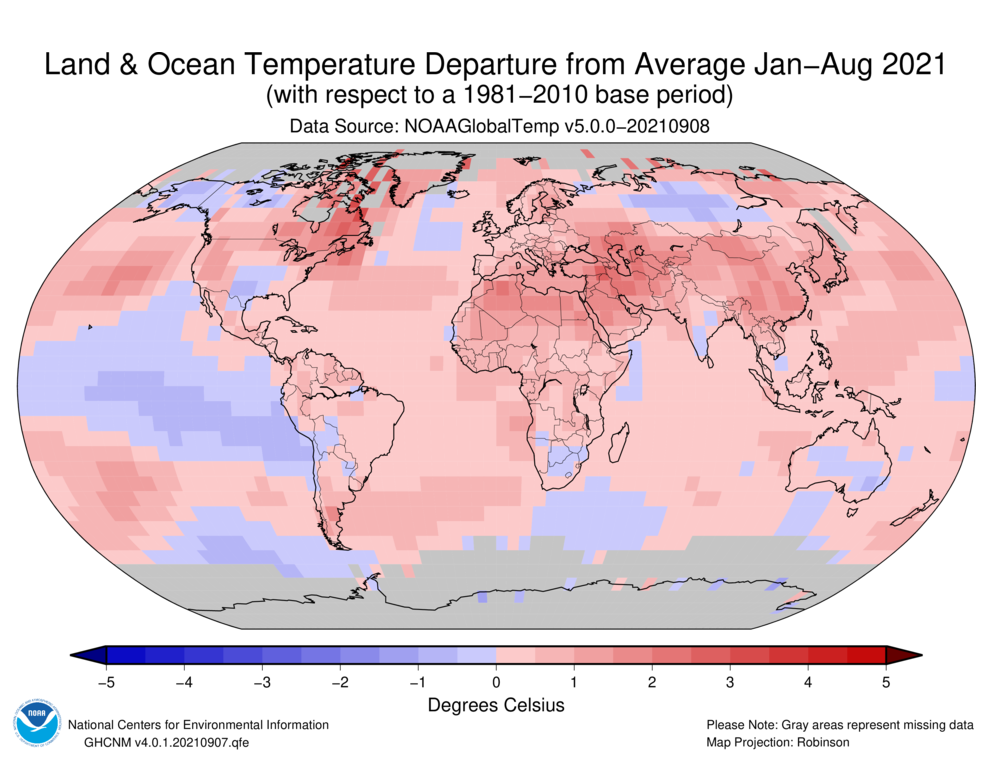 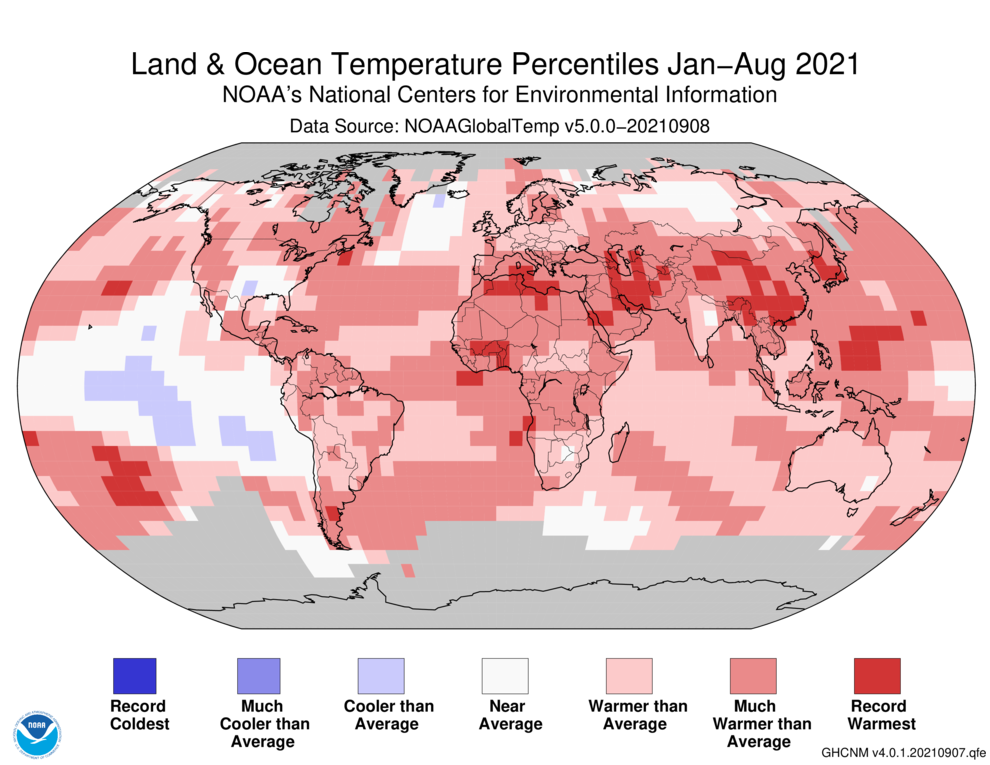 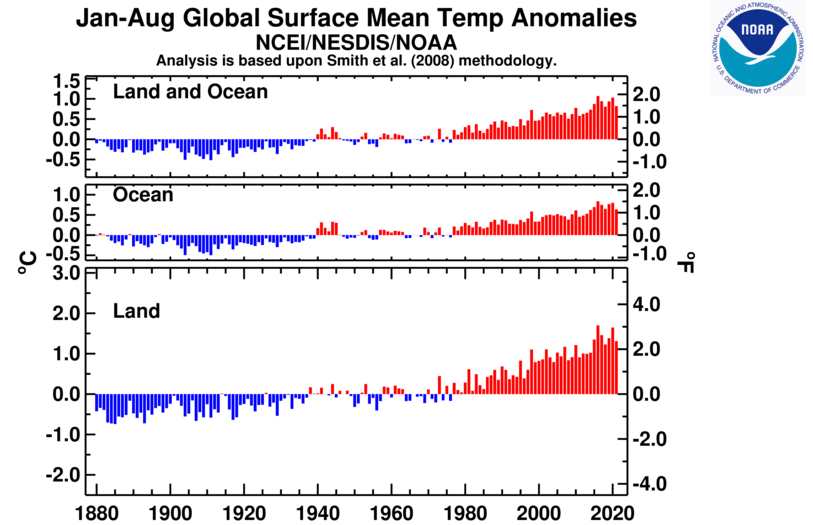 The maps shown below represent anomalies (left, using a base period of 1961–1990) and percent of normal (right, using the same base period) based on the GHCN dataset of land surface stations. As is typical, precipitation anomalies during August 2021 varied significantly around the world. 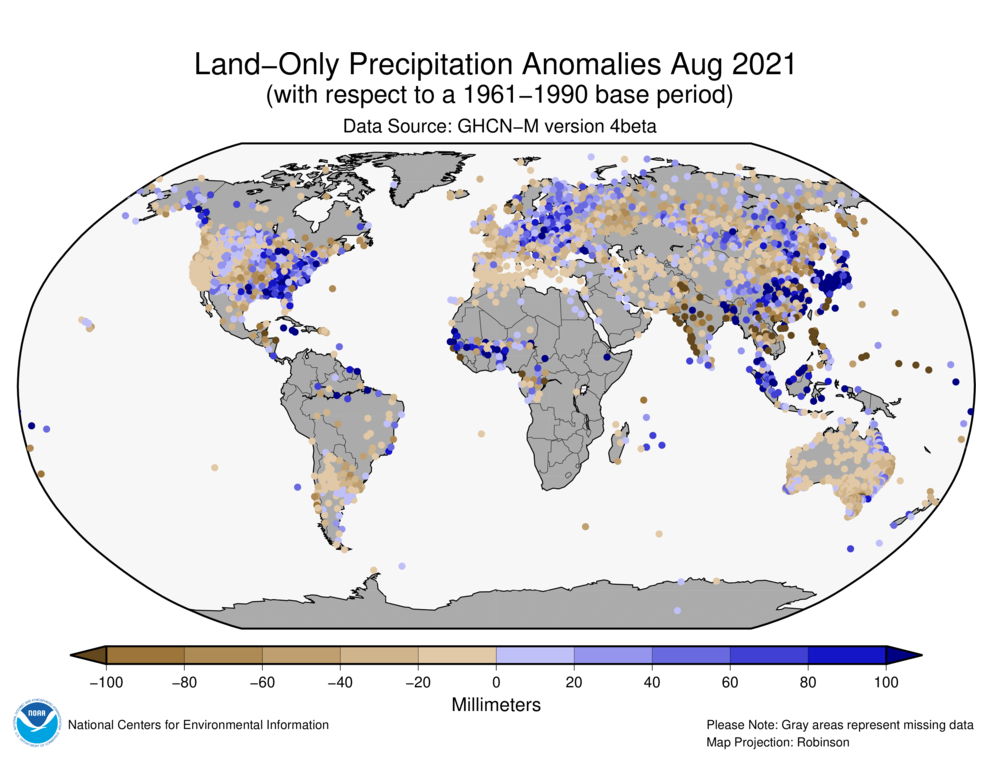 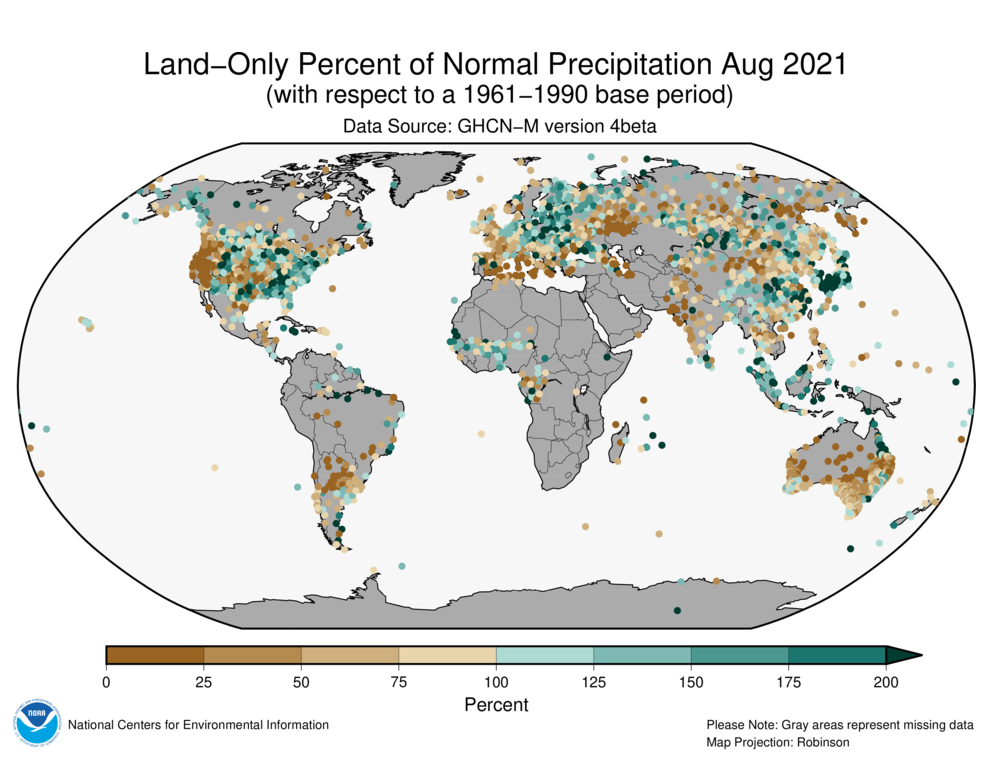 Tropical Storm Fred formed in the Atlantic basin on August 9. Fred passed south of Puerto Rico; however, the storm's outer rain bands brought heavy rain to parts of the island, with some locations receiving over 5 inches. The rains helped improve drought on the island. By August 11, tropical storm Fred made landfall in Hispaniola. According to media reports, the copious rain prompted the overflow of rivers, displacing over 4,000 people from affected areas. Families were left without power and access to water. As soon as Fred made landfall in Hispaniola, it was downgraded to a tropical depression. Once in the Gulf of Mexico, Fred regained its strength and made landfall in Florida's Panhandle as a tropical storm, weakening once again to a tropical depression shortly after landfall. However, Fred's remnants caused torrential downpours across the southeastern contiguous U.S. Parts of western North Carolina had over 12 inches (305 mm) of rain.

Hurricane Grace made landfall twice over Mexico. The first time it was a Category 1 hurricane and made landfall in the Yucatan Peninsula on August 18. As soon as it made landfall, it weakened to tropical storm. Once it was back in the warm waters of the Bay of Campeche, it rapidly intensified to Category 3 — becoming a major a hurricane with sustained windspeeds of 125 mph (205 km h-1). Grace became one of the strongest hurricanes to make landfall in eastern Mexico. The storm caused widespread damages in Mexico, causing floods and landslides, uprooted trees, brought power lines down, and damaged homes and schools.

Hurricane Ida was a dangerous Category 4 hurricane when it made U.S. landfall in Louisiana on August 29, 2021 — the same day that Hurricane Katrina did 16 years before. Before impacting portions of the southern and northeastern U.S., Ida also caused significant damage to parts of Cuba, by destroying homes and bringing down power lines.

The global precipitation map for August 2021 (Fig. 1, top panel) displays the typical narrow ITCZ across the Pacific and Atlantic Oceans, with the subtropic dry zones to the north and south. Over the Asian sector rainfall dominates South Asia, with Australia having its typical dry season. These and other typical climatological features are always present, but the anomaly maps (magnitude and percentage in the middle and bottom panels of Fig. 1) provide the summary of rainfall events and lack thereof for this month. Over the South Asian monsoon region, the general rain pattern is split into wet and dry anomalies aligned with an east-west ?striped? appearance. Across central and eastern China and extending through southern Japan, a strong, positive rainfall anomaly is associated devastating floods and landslides there. To the south, across India, Indochina, the Philippine Islands and out into the western Pacific a drier-than-normal zone exists, indicating a weak monsoon over those land areas and a lack of tropical cyclones in the western Pacific this month. However, even further south another strong positive rainfall anomaly is evident across Indonesia and surrounding areas related to floods during the month. This monsoon arrangement even seems to have extended further south to provide northern Australia more rainfall than typical for this time of year. The general pattern of positive anomaly over the Maritime Continent and generally negative anomalies over the central Pacific has a somewhat La Nina appearance, even though the ENSO indices are only slightly negative this month.

Over South America the negative rainfall anomalies for much of the continent helped to perpetuate the ongoing drought there. Further north the rainfall anomaly pattern is associated with flood, drought and wildfires. The strong, positive anomaly centered just off of southwest Mexico and extending northwestward is associated with tropical cyclones there tending to remain offshore, but causing some flooding and helping to generate some moisture for the North American Monsoon extending up through Mexico into the U.S. However, despite some monsoon rain this month, especially in Arizona and New Mexico, the general drought in the western U.S. remains as can be seen in the anomaly patterns. This was especially true along the western U.S. coastal areas which remained very dry, with resulting devastating wildfires. A seesaw pattern then is evident, with positive rainfall anomalies over the eastern U.S. related to the general weather pattern, but also the actions of a number of tropical cyclones, i.e., TCs Fred, Grace and Henri. These storms affected regions in the southeast U.S. with heavy rain, but also further north along the coast into New England. Then at the end of the month Hurricane Ida came through the Gulf of Mexico and hit Louisiana and the surrounding region with wind, storm surge and heavy rain before moving into the already wet northeast in early September. In addition to these larger-scale effects a very localized extreme rainfall thunderstorm event in central Tennessee caused a deadly flash flood and contributed to the climate-scale anomaly field.

Over Europe and northern Asia in August there is a spatial variation of precipitation and the associated anomalies. Scandinavia and surrounding areas have a small surfeit of rainfall and that will help alleviate drought conditions. On the other hand, the precipitation deficits dominating northern Russia will extend the dry surface conditions there. Southern Europe also has general rainfall deficits again continuing droughts and even serious wildfires in Greece and Turkey. 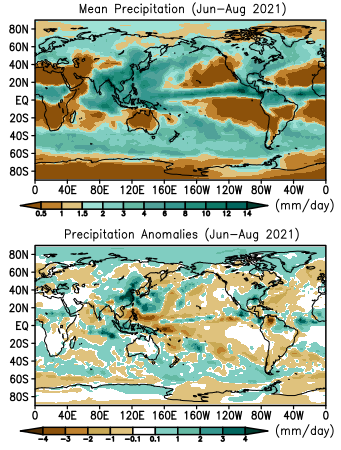 The seasonal (June–August) summary of mean precipitation and anomalies for this year (Fig. 2) show most of the features already described for August and the previous months, although in a smoother form and with greater coincidence on the dry side with drought conditions. On the wet side the most intense feature in the anomaly field is again over eastern China, resulting in a continuing set of floods during the summer. In northern Eurasia the string of negative anomalies from Scandinavia and across northern Russia into Siberia are linked to features seen in drought indices. A similar correspondence is evident over North America with the positive anomalies in the southeast U.S. and negative features to the west and across the southern half of Canada. Although the drought in the southwest U.S. continues, the rainfall anomaly map for the season shows partial relief with rain excess (above average) from Mexico to the north into the U.S. as a result of an active North American Monsoon this year. In the tropical Pacific the ITCZ shows a narrow positive anomaly surrounded by drier than normal conditions to the north and south. To some degree this is also the case in the Atlantic. This narrowing of the ITCZ is also evident in long-term trends and indicates that the current anomaly pattern is tending to accentuate the trend.