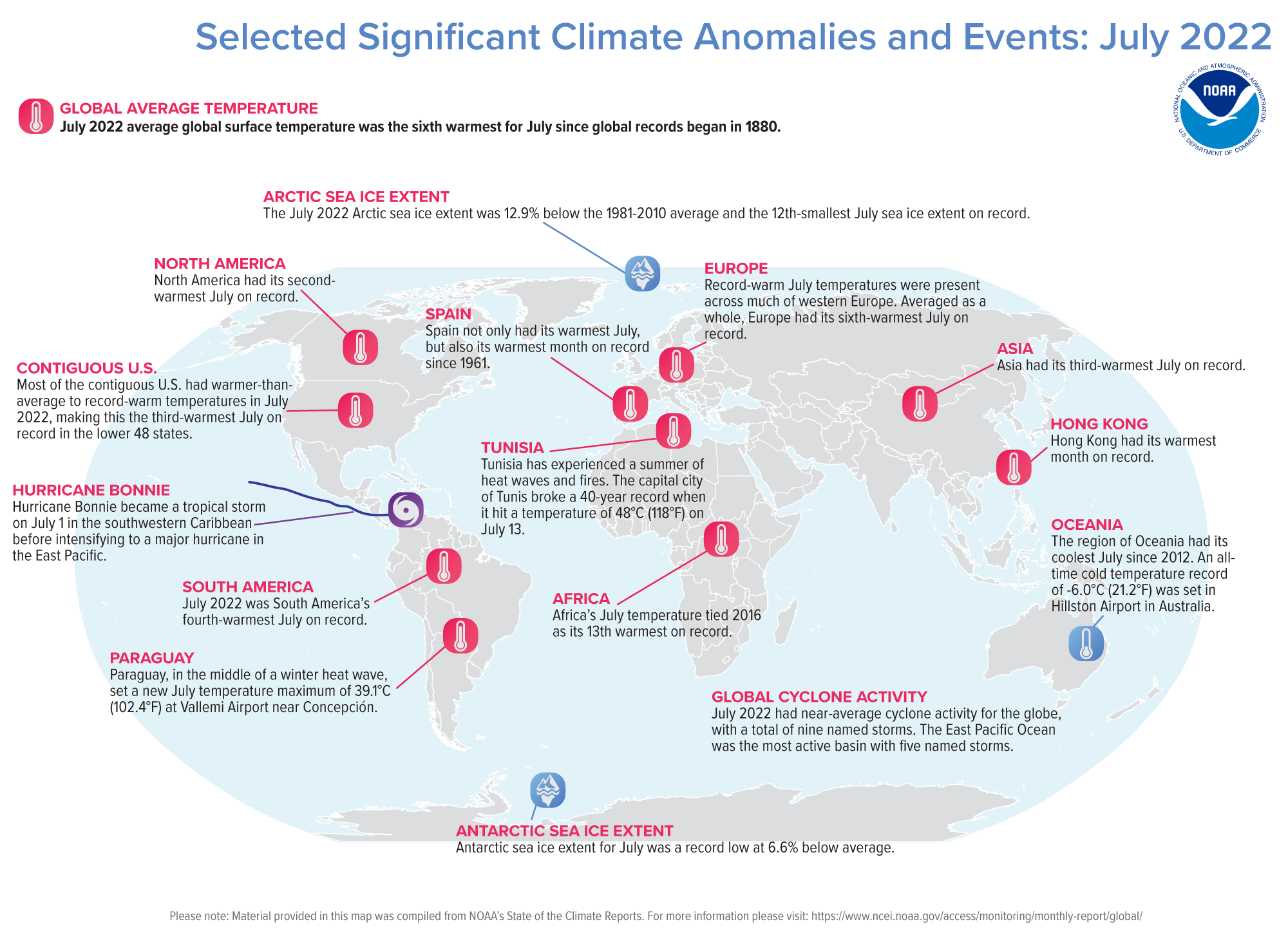 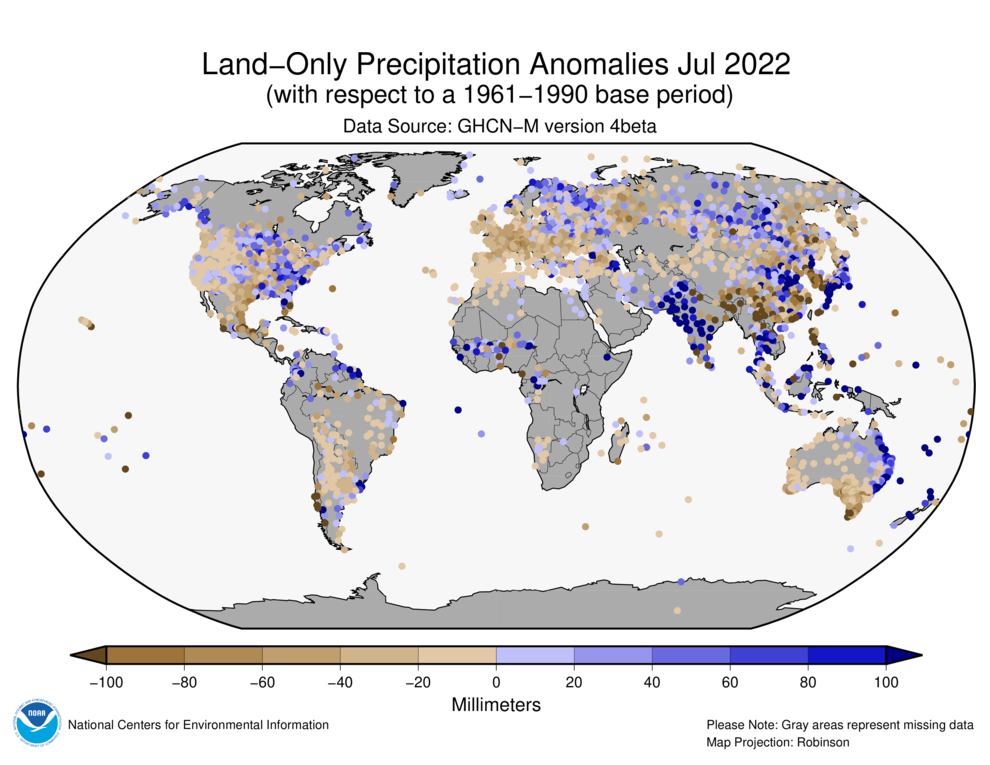 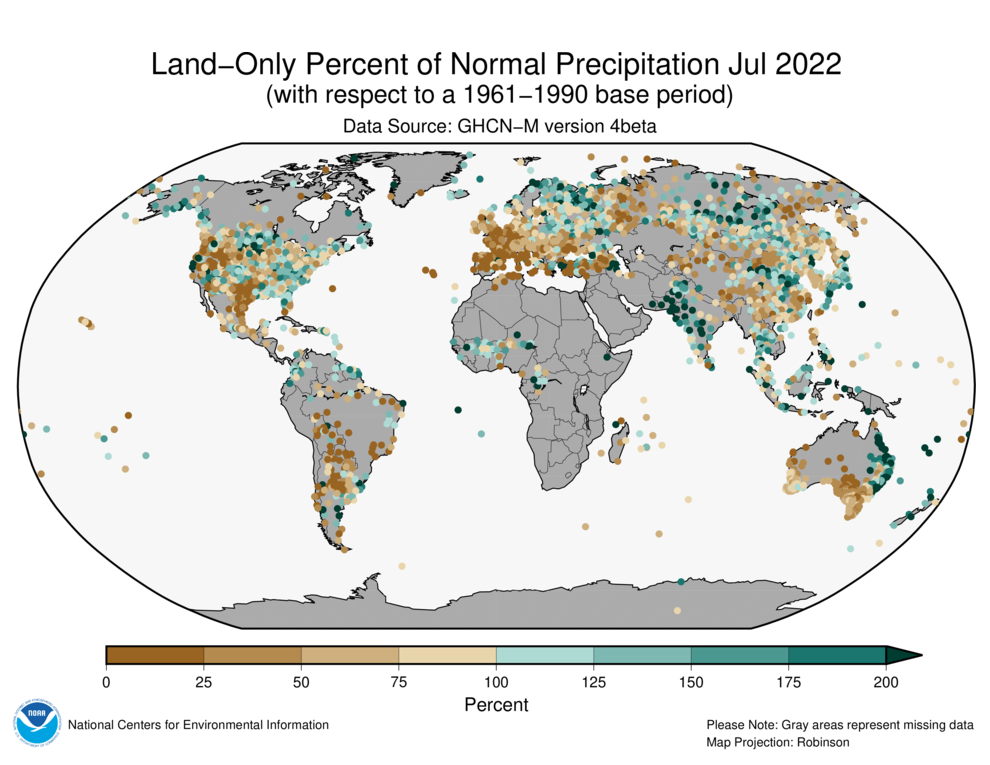 Precipitation anomalies during July 2022 varied significantly around the world. July precipitation was generally less than normal across the western contiguous U.S.; Mexico; western, central and southern Europe; central and southwest Asia; and southern and western Australia, as well as parts of southeastern Brazil and southern South America. Much of Argentina, central Brazil, Hawaii, and parts of southeastern China and western Russia had lower-than-average precipitation for July. Wetter-than-normal conditions were notable across parts of the eastern contiguous U.S., Alaska, northeastern South America, Iceland, Finland, western India, Pakistan, southeast Asia, New Zealand, and the eastern coast of Australia.

In meteorological terms, July is the middle of Northern Hemisphere summer and Southern Hemisphere winter. The global precipitation pattern in Fig. 1 (top panel) contains the usual mean features pushed toward their maximum northward positions, but showing patterns of variations on top of the seasonal cycle due to inter-annual and sub-seasonal forces. The Inter-Tropical Convergence Zone (ITCZ) narrow zone of rainfall stretches across the Pacific above the Equator from east to west ending in South Asia with the largest area of rainfall on the planet. The Atlantic ITCZ is also evident in intermittent mid-latitude swaths of precipitation across the land and oceans of the Northern Hemisphere and the mostly continuous east-to-west band at about 45°S.

The patterns of the July variations are evident in the deviations from the July climatology in the middle and bottom panels of Fig. 1. The strongest feature on the dry side (negative anomaly, middle panel) is in the western Pacific, just south of the Equator, with the equatorial Pacific in general having broad negatives, with imbedded, small positive areas. To the west, over the Maritime Continent, South Asia and the North Indian Ocean positive anomalies dominate, with smaller dry anomalies imbedded. This general anomaly pattern is consistent with the July La Niña composite (Niño 3.4 Index ~ -0.8)— compare the two panels in Fig. 2. Although there is a spatial correlation between the two patterns over the tropical Asia-Pacific area, there is not strong alignment, typical of this season and this particular La Niña situation. 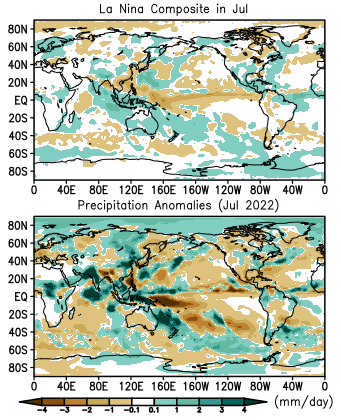 Although Australia tends to have generally wet conditions during La Niña (see Fig. 2, top panel), this July only the eastern part indicates that concurrence, but that monthly feature contained a 250 mm daily rainfall total in Sydney very early in the month with associated serious flood conditions there and surrounding areas. Over South Asia, the summer monsoon has been very wet in some locations including Indochina and especially western India and Pakistan with floods in northern and western India. The above normal percentage rainfall over the eastern part of the Arabian Peninsula and to the east (Fig. 1) is linked to floods in Oman, Yemen, Iran and Afghanistan at various times of the month. Over Africa, the overland ITCZ had an active month with distinct positive anomalies in west, central and eastern locations with linked floods in Gambia on the west coast late in the month, and also in northern Nigeria, the Central African Republic and Sudan earlier in July.

The central and southeast portions of South America were drier than normal in July, tending to continue the long-term drought there. Parts of the normally wet northern portion of the continent were wetter than normal, including in the west, with flooding in Ecuador. The Gulf of Mexico and Caribbean Sea were dry, with the Atlantic tropical storm season very quiet during the month, except for TS Bonnie doing an unusual short-lived crossing from the Caribbean into the Pacific at the beginning of the month. The eastern Pacific, both in the tropics and into middle latitudes, is dry, except for a couple of small features along the coast of Mexico and Central America. These are related to tropical cyclones which were active there this month, with their precipitation swaths (more than two) producing the two small features in the anomaly field relative to the climatological mean.

Over North America, areas of the east are wetter than normal, while Mexico and the western U.S. and Canada are generally dry. Looking closely one can see the dryness over the southern and central plains and to the west, with a small break in between. Although not showing up very well because of the coarse scale of the analysis, the North America monsoon was effective this month in providing reasonable moisture to the southwest U.S. and even ameliorating the ongoing drought there somewhat. The west coast continued to suffer dryness and the Yosemite fire was one result. Meanwhile the positive anomaly in the eastern U.S. was related to an active convective month with very destructive floods in eastern Kentucky and the St. Louis area, and flash flooding in other locations.

Western Europe is enduring a very hot and dry summer. As the anomaly maps show, areas from Portugal and Spain through France and Germany, and north and south to the UK and northern Italy are dry and part of a long-term drought. Record-high temperatures in many locations combined with the lack of rain has produced wildfires in Portugal, crop failures in Italy and general drought over the region. The dry anomaly feature over Europe can be traced southwestward across the Atlantic into the Gulf/Caribbean region. To the south of this lengthy dry feature there is a positive feature on the northern side of the Atlantic ITCZ and to the north there is a distinct wet feature running from the middle Atlantic states to the northeast indicating the summer storm track location. Perhaps this indicates a northward shift of all the climatological precipitation features with the hot temperatures this past month and a Mediterranean regime edging further north into Europe.

Further to the east across Scandinavia and northern Eurasia, there is an alternating positive, negative pattern of anomalies seemingly indicating a relatively stationary longwave pattern during the month. Even further north, over the Arctic Ocean, the anomalies are almost all positive. The positive sign for this particular month is consistent with the overall summer trend of precipitation in this region over the length of the GPCP record and the result of global warming and increased moisture, especially over the increasing open water in the Arctic.

July 2022 was drier than normal across parts of Europe and excessively hot across all of Europe, for a second month. The combination of heat and dryness resulted in excessive evaporative stress and continued to deplete soil moisture and groundwater levels across the continent. Dryness was evident for the last 3 to 9 months across much of Europe and, for southern parts of the continent, dryness has dominated the last 5 years. The European Combined Drought Indicator showed drought stretching from Spain to southern Scandinavia and from the British Isles to Ukraine. Satellite observations of vegetative health showed stressed vegetation across western and southern parts of the continent.

In France, the unprecedented drought has caused serious damage to agriculture and prompted 93 of the nation's 96 metropolitan departments to go on alert, with restrictions across much of the country. The drought has lowered water levels on the Rhine River to the point where the river may effectively close, disrupting trade across the continent. The heat and drought have put Spain's olive crop in jeopardy. Romanians were suffering water rationing and failed crops from drought which began in the winter of 2021-22. The heat wave caused over 1000 deaths in Spain and Portugal. In Italy, at least one-third of the country's agricultural production was at risk, and a state of emergency was declared in several northern regions where the Po River has dried up.

July was drier than normal in Southwest Asia and parts of western, far eastern, and far southern Asia. Dry conditions have plagued Southwest Asia for much of the last 3 years. Parts of central, northern, and southeast Asia had dry conditions for the last 2 to 9 months. Eastern to southern parts of the continent were warmer than normal in July, and evapotranspiration has been above normal in central and far eastern areas for the last 1 to 3 months. Groundwater and soil moisture levels were low in Southwest Asia and in northern, central, and southern parts of the continent. Satellite observations of vegetative health revealed poor vegetation in the southwest, central, and some far eastern areas. According to media reports, a severe drought in northwest Cambodia has destroyed at least 10,000 hectares (24,700 acres) of rice and farmers were calling on the government to provide irrigation and other assistance.

Northern, eastern, and southern parts of Africa were drier than normal in July, while other parts were wetter than normal. But dry conditions for the last 2 months to 2 years have depleted groundwater and soil moisture, and continued warmer-than-normal temperatures have increased evaporation, in the northern and especially eastern areas where satellite observations indicated vegetation was in poor health. According to media reports, rain has not fallen in 3 years in northern Kenya, leaving villagers with only bitter wild berries to eat. More than 200 people in northeast Uganda starved to death in July as prolonged drought and other factors left more than half a million people hungry.

Western and southeastern portions of Australia were drier than normal in July while northern and eastern areas saw wetter-than-normal conditions. Temperatures were warmer than normal in the southwest but cooler than normal to the north and east. At longer time scales, especially the last 6 to 12 months, dry conditions were evident in the north, where low groundwater and soil moisture were detected by satellite (GRACE). Stressed vegetation was detected in southern to northern areas. The observations of dry soils, as well as low stream levels, in the north and southwest were confirmed by the Australian Bureau of Meteorology's Combined Drought Indicator analyses.

Central parts of South America were drier than normal during July while almost the entire continent was warmer than normal. Much of South America, from southern Peru and eastern and southern Brazil to Argentina, was dry at the 3- to 6-month time scales, with some parts of this region dry at multi-year time scales. Evaporative stress was especially high for the last 1 to 3 months from southern Peru and central Brazil to northern Argentina, where satellite observations indicated vegetation in poor condition. Satellite observations also indicated low groundwater and soil moisture across much of Brazil to Argentina. Drought in southern and eastern Brazil was confirmed on the Northeast Brazil Drought Monitor.