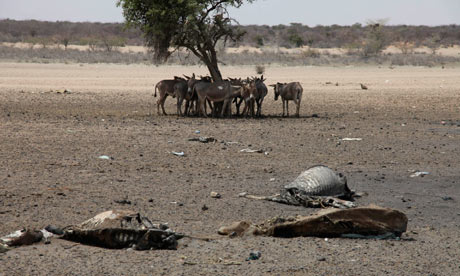 A crippling drought gripped much of the Horn of Africa in July. Somalia, Ethiopia, Eritrea, Kenya, and Djibouti were majorly impacted. Two consecutive seasons of poor rainfall—the short deyr rains from October to December and the long gu rains that were supposed to begin in early April but were late and scattered—resulted in one of the driest years since 1950/51, according to the UN's Office for the Coordination of Humanitarian Affairs (OCHA). The lack of deyr rains was attributed to the La Niña climate phenomenon, which took place from July 2010 through April 2011. Somalia bore the combination of drought, two decades of civil unrest, and rising food prices, according to aid agency reports. On July 19th, the United Nations offically declared a famine in the southern Bakool and Lower Shabelle regions of Somalia, the first time famine has been declared in this country since 1992. Overall, it was estimated that 10 to 11 million people in East Africa were in need of food from the drought, including 3.7 million in Somalia. In total, the areas considered to be in a state of emergency and classified as "critical" be the U.N. OCHA included the coastal region of Somalia northeast of Mogadishu, far eastern and southern corners of Ethiopia, and Kenya's northeast frontier. The central drought area lies in a nomadic region where people rely heavily on their livestock. This year, in some regions of Somalia, more than 80 percent of the livestock was destroyed, including many camels who are normally considered to be drought resistant. 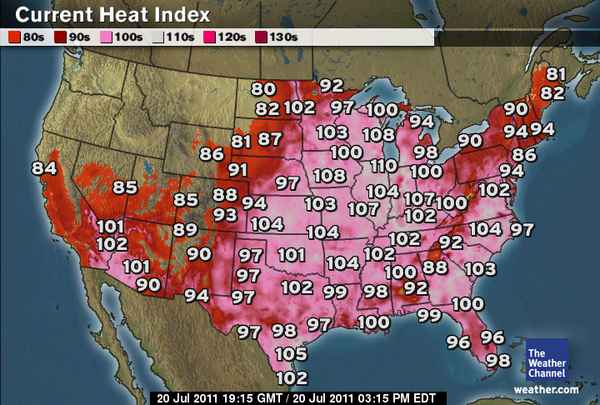 Much of July was defined by excessive heat across the eastern two-thirds of the United States. Millions of Americans were affected by the temperatures, which, when combined with relative humidity, produced heat indexes of 110°F (43°C) or higher across a wide swath of the nation, according to the National Weather Service (NWS). Heat index values surpassed 120°F (49°C) at eight NWS stations on the 19th, including 129°F (54°C) at Newton, Iowa. Interstates and highways in several states buckled from the heat and thousands of farm animals housed indoors succumbed to the hot weather. For the month, 78 all-time high maximum temperature records were broken along with 209 all-time high minimum temperature records. The minimum temperature records are particularly noteworthy because the higher nighttime temperatures give people less reprieve from the extreme daytime heat. On July 12th, Richmond, Virginia recorded its all-time high minimum temperature of 81°F (27°C). The heat wave brought at least 100°F (38°C) temperatures to Raleigh, North Carolina every day from July 20th to the 24th, breaking a new record for the most consecutive days the area has recorded triple digit temperatures. Newark, New Jersey sweated through its all-time highest temperature of 108°F (42°C) on the 22nd. At least 64 human fatalities were blamed on the heat, with countless more heat-related illnesses reported. Well over 140 million people were under heat advisories at some point during the month.

Monsoon rains brought floods and landslides to various parts of China during July. At the beginning of the month, flooding in two coal mines in southern China—one in Guangxi province and the other in neighboring Guizhou province—trapped more than 40 miners. Rescue efforts were hampered by rising waters and the search for the miners in Guizhou was called off on July 17th. Xinhua News Agency reported that 18 people were killed by a rain-triggered landslide in the northwestern province of Shaanxi on July 5th. The local government said that nearly 7,000 homes were either damaged or destroyed and almost 15,000 acres (6,000 hectares) of cropland were submerged. Direct economic losses from that event were estimated at $25 million U.S. dollars. According to China Daily, the National Commission for Disaster Reduction reported that 1.57 million residents in the provinces of Jiangsu, Anhui, Jiangxi, Hunan, Guangdong, Sichuan, Yunnan and the autonomous region of Tibet were affected by heavy rains and storms during the second week in July. Six people were killed and damages were estimated at more than $54 million U.S. dollars. 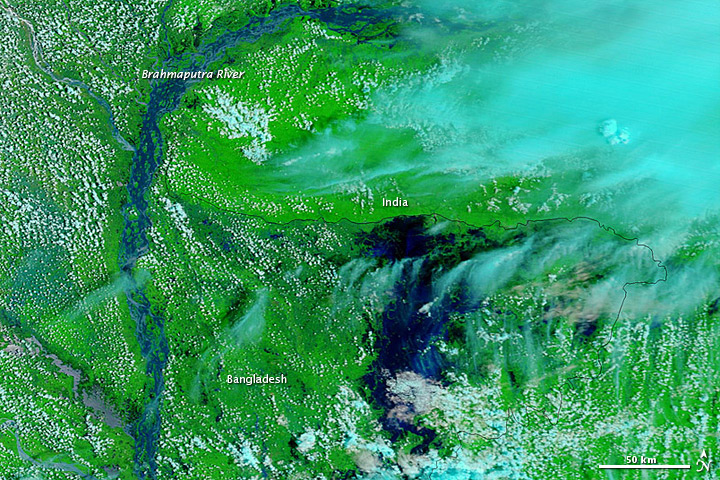 In nearby Nepal and northeastern India, almost 80 people perished and 200,000 had to be evacuated due to heavy rains and subsequent landslides since the monsoon season began in June. In Bangladesh, five days of heavy monsoon rains led to flooding along the Matamuhuri and Bakhkhali rivers that killed six people and displaced more than 10,000 on July 22nd. Flooding and landslides are common during the South Asian monsoon, which lasts from June to September.

In South Korea, 12 people were killed and four others were missing due to monsoon rain-induced landslides from July 8th to 10th in the provinces of South Jeolla, North Jeolla, and South Gyeongsang. More than 15.7 inches (400 mm) of precipitation reportedly fell over South Jeolla province. The rains flooded more than 180 homes and over 300 people were evacuated. On July 27th, the heaviest single-day rainfall since 1907 occurred in the capital city of Seoul, bringing more than 11.8 inches (300 mm) of precipitation. The diluge triggered flash floods and landslides that killed at least 67 people and left 10 others missing. Additionally, the country's Defense Ministry said that 10 landmines, buried on a mountain in southern Seoul in the early 1950s during the Korean War, had not been recovered following a mudslide in the area.

Heavy flooding in the northwest Iranian province of West Azarbaijan on July 16th affected residents in more than 50 villages. At least three people were killed and 40 homes were destroyed along with two bridges. Damages were estimated to exceed $18.8 million U.S. dollars.

Days of heavy rainfall in northeastern Brazil on July 15th–19th led to flooding and mudslides across the region. According to the Global Disaster Alert and Coordination System, nine people were killed in the state of Pernambuco with two others missing, and one person perished in Paraiba. More than 340 families lost their homes. Sixteen dams burst in the town of Lagoa Seca, where 10 inches (250 mm) of rain fell—an amount roughly equal to the July monthly average rainfall, according to the local government.

Excessive heat was not the only extreme event to occur in the midwestern United States during July. On the 27th, 7.47 inches (190 mm) of rain fell over Dubuque, Iowa, shattering the previous daily record of 3.10 inches (79 mm) set in 1896, according to preliminary reports from the National Weather Service. That rainfall contributed to the all-time wettest month for the city—16.01 inches (407 mm)—breaking the old record of 15.46 inches (393 mm) set in September 1965. Chicago, Illinois reported its wettest July on record, at 11.15 inches (283 mm), breaking the old record of 9.56 inches (243 mm) set more than 120 years ago in 1889. Much of the heavy rain was accompanied by thunderstorms. Tens of thousands of residents lost power in Chicago and Detroit due to hard-hitting storms.

A massive dust storm—also known as a haboob in Arabic—roared across Phoenix, Arizona and nearby cities of Tempe, Avondale, and Scottsdale on July 5th. According to the National Weather Service, the huge wall of dust was estimated from radar data to have reached heights up to 5,000–6,000 feet (1,500–1800 meters) and width of 50 miles (80 km) in some areas. The storm brought near-zero visibility and led to flight delays and power outages for around 10,000 residents as winds gusted at more than 50 mph (80 km/hr). The dust cloud originated from an afternoon storm near Tuscon and moved to the north across the Sonoran desert. The storm traveled at least 150 miles (240 km), with the dust fueled by ongoing dry conditions in the region. A second, smaller dust storm hit the Phoenix area again on July 18th. A thick wall of dust extended upwards roughly 3,000 feet (900 meters), bringing 25 to 35 mph (40 to 55 km/hr) winds and low visibilty conditions, and leading to flight delays at Phoenix International Airport. Dust storms during the North American Monsoon are fairly common, with an average of one to three storms reported each year across the Phoenix area.

A rare tornado struck the far eastern Russian city of Blagoveshchensk on July 31st. The twister lasted 13 minutes in duration, killing one person, injuring dozens more, and leaving an estimated $2.9 million U.S. dollars (80 million rubles) in damages. According to a Russian meteorologist, this was the first tornado on record to hit a major Russian city; Blagoveshchensk has a population of around 220,000. 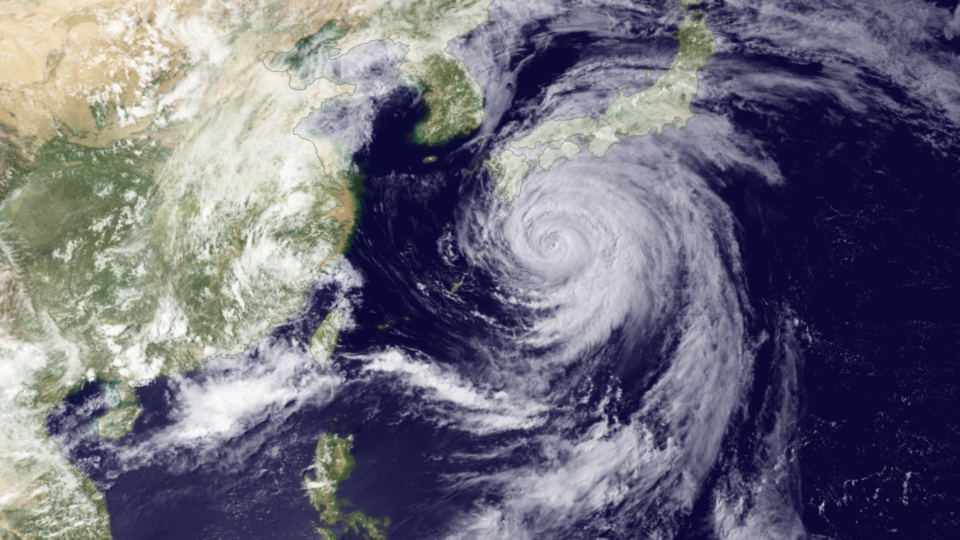 The sixth named storm and second typhoon of the 2011 Pacific typhoon season developed east of the Marianas on July 11th. Ma-on quickly gained strength and became a powerful Category 4 super typhoon on the 15th, with wind speeds of 132 mph (212 km/hr) as it moved northeastward toward the southern coast of Japan, according to NASA. The storm weakened significantly as it moved toward land and had been downgraded to a Category 1 typhoon when it briefly made landfall over southern Tokushima Prefecture on the 19th. Due to its slow-moving nature, copious rainfall poured over the region. Precipitation totaling 33.5 inches (851.1 mm) was measured over the village of Umaji in Kochi Prefecture the same day Ma-on made landfall—a single-day Japanese record. Total rainfall from the typhoon exceeded 39 inches (1,000 mm) on the Pacific side of Japan in some locations. One person died and at least 60 people were injured due to the torrential rain and strong winds. More than 120 flights were cancelled and local train services were disrupted. 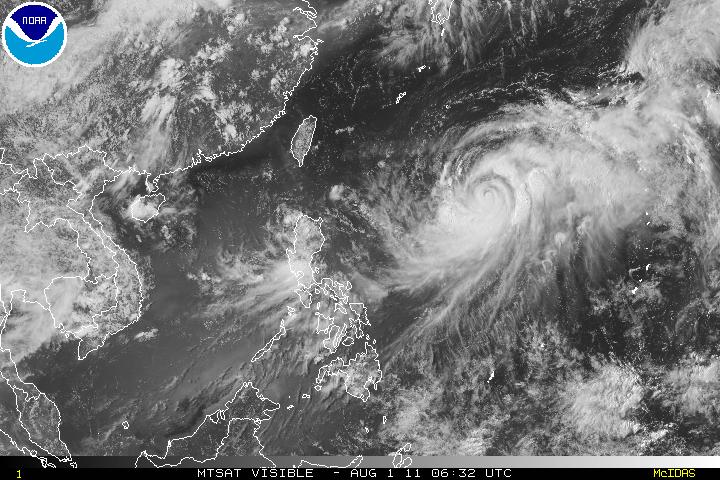 Two back-to-back tropical storms left their marks in parts of East Asia near the end of July. Tropical Storm Nock-Ten made landfall over the eastern mountain areas of Luzon, the Phillipines' main island, on July 27th, leaving at least 66 people dead and 17 more missing due to flooding and landslides. More than 645,000 residents were affected by the storm and damages were estimated to be about $24 million U.S. dollars. The storm moved across the South China Sea and was also responsible for two deaths in the southern Chinese province of Hainan on July 29th and three deaths as it hit Vietnam on the 30th. Nock-Ten was followed by Typhoon Muifa, which did not make landfall over the Philippines, but heavy rains from the storm led to four deaths in the country on July 31st. Nock-Ten and Muifa were the 10th and 11th storms to affect the Philippines to date in 2011. The country typically experiences an average of 20 named storms per year. 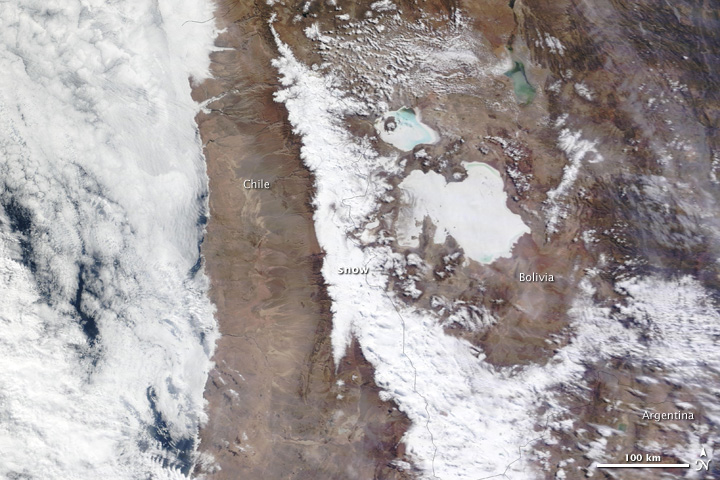 On July 7th, a cold front brought the heaviest snowfall in nearly two decades to what is considered one of the driest places on Earth. Up to 32 inches (80 cm) of snow fell in parts of the Atacama desert in northern Chile, according to the Chilean Directorate of Meteorology. Local roads were closed and dozens of people were rescued from their stranded vehicles. The average high and low temperature for San Pedro de Atacama during winter (June, July, August) is 72°F (22°C) and 39°F (4°C), respectively. Prior to the snowfall, the temperature dropped to 18°F (-8°C) in the capital city of Santiago on the 6th. Annually, the desert averages only 2.0 inches (50 mm) of precipitation. Some places in the desert have no recorded rainfall. According to a NASA study, the dryness is due to a persistent climate pattern formed by the presence of the strong high pressure center in the atmosphere over coastal Chile and a constant temperature inversion—when temperatures increase with height in the atmosphere—due to the cool Humboldt ocean current.

The winter weather continued in Chile. According to The Pategonia Times, up to 9 feet (2.7 meters) of snow fell in the city of Longquimay in the country's east central region during July 17th–20th. The Chilean president said that this was the worst polar front to affect the region in 30 years. An estimated 6,500 residents living in mainly rural areas were isolated due to the storm.

Unusually heavy snow also fell in South Africa. Up to two feet (60 cm) of snow fell across large parts of eastern South Africa on July 25th–26th; the area typically receives a dusting of snow once or twice each year. High winds accompanied the frozen precipitation. Major transport routes, including highways and shipping, were disrupted during the storm.