About 50 major wildfires burned in central and southern Chile, fueled by high winds, warm temperatures, and extremely dry conditions. Shifting winds were blamed for the deaths of seven firefighters battling the blazes. Thousands of people were forced to evacuate as hundreds of homes were destroyed and millions of dollars in damages were incurred. Much of the Torres del Paine National Park was charred. The park attracts around 150,000 tourists each year. Many of the fires were believed to be intentionally set. 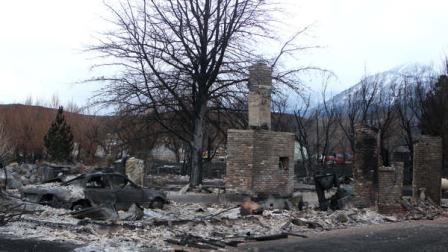 A major wildfire broke out near Reno, Nevada on January 19th. The fire was fanned by winds as high as 82 mph (132 km/hr). Twenty-nine homes were destroyed and thousands of residents were evacuated as more than six square miles (1,550 hectares) rapidly burned. Flames as tall as 40 feet (12 meters) scorched dry sagebrush, grass, and pines. The area had just broken a winter record of 56 straight days without precipitation before light snow fell just days before the fire. The previous winter dry-spell record was 54 days, during the winter of 1960/61. Several daily high temperature records were also tied or broken around Reno and South Lake Tahoe during the first half of January, according to the National Weather Service. The fire was contained on the 21st as two inches of rain fell over the affected area.

In the pre-dawn hours of January 29th, a combination of fog and heavy smoke from a brush fire brought visibility to near-zero and led to several crashes that killed 11 people on a strectch of Interstate 75 near Gainesville in north Florida. At least 18 others were hospitalized. The interstate had been closed for a period of time before the accidents occurred but had recently re-opened. The accidents occurred in both the north and south bound lanes of the higheway. Southbound lanes remained closed the following day because some of the asphalt had melted away. The brush fire burned 62 acres and had been contained by later in the day but was still burning, according to the Florida Forest Service.

Record-breaking heat helped welcome in 2012 in parts of southeastern Australia. South Australia's capital city of Adelaide broke its daily maximum temperature record on January 1st, reaching 106°F (41.1°C). This is the highest New Year's day temperature for the city since at least 1900. On January 2nd, 45 people in Victoria were treated for heat-related illnesses. Additionally, hundreds of wildfires were reported across the southern part of the country. On January 6th, more than 200 firefighters were battling a blaze that had burned nearly 20,000 acres (8,000 hectares) in just two days near the town of Wilmington in South Australia. Most roads in the area were closed due to poor visibility.

Heavy rains led to flooding and landslides in southeastern Brazil at the beginning of January. At least eight people were killed and over 13,000 forced to flee their homes across the states of Minas Gerais and Rio de Janeiro. A burst dam that protected the town of Campos de Govtacazes in northern Rio de Janeiro led to the evacuation of several thousand residents. Nationally, officials estimate that two million people have been affected so far during this rainy season. Heavy precipitation and landslides are not unusual in the mountainous region of Rio de Janeiro.

Torrential rainfall since mid-December led to a mudslide on January 5th that killed at least 30 people and left 44 others missing on Mindanao Island in the southern Philippines. The slide was reported to be 1,000 feet (300 meters) long and 200 feet (60 meters wide), and occurred in the middle of the night in the gold-mining township of Compostela. An estimated 60 homes were destroyed. Fatal landslides have occurred in this region within the past year. Northeast Mindanao was also majorly impacted by Tropcical Storm Washi in December 2011. 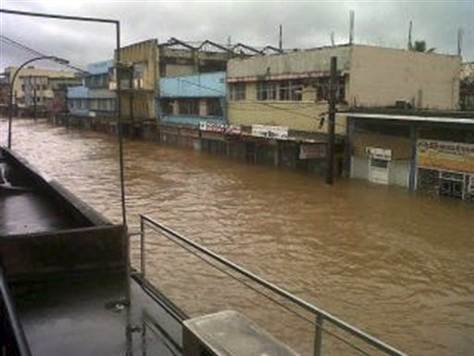 In Fiji, days of heavy rain near the end of January led to flooding and landslides that killed six people on the islands of Viti Levu and Vauna Levu. The flooding was worst in the western region of Viti Levu, Fiji's largest island. In total, at least 3,500 residents were displaced, roads were submerged by the high water, and power was disrupted in some areas.

High winds ripped through the United Kingdom (UK) on January 3rd. Scotland and Northern Ireland were the hardest hit, with gusts as high as 102 mph (164 km/hr) reported in Edinburgh. The 102 mph gust was the third highest ever recorded at that station, and the strongest since 1998, according to a report by The Weather Channel. Airports in Glasgow, Edinburgh, and London were forced to cancel or delay many flights. Train services and ferry transport were also disrupted. Numerous roads were closed due to fallen trees. Two people were killed and tens of thousands of residents lost power. On the positive side, electricity output from wind farms across the UK reportedly doubled as a result of the unsettled weather, according to Scottish Renewables. 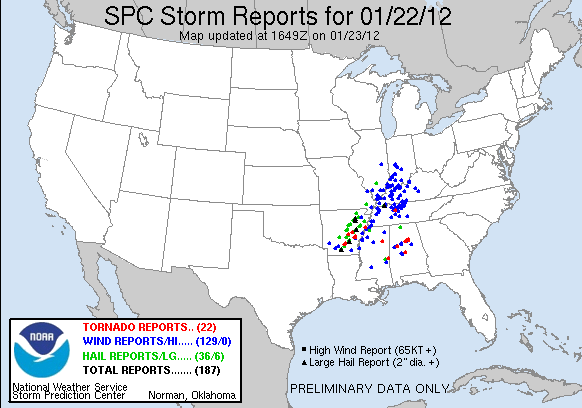 Severe thunderstorms spawned tornadoes northeast of Birmingham, Alabama on January 23rd, killing two people and injuring over 100 others. Damage was extensive as homes were destroyed, and trees and power lines were downed. The National Weather Service confirmed eight tornadoes, including three EF-2s and two EF-3s. One of the EF-3 tornadoes in Jefferson County caused most of the damage and was responsible for one fatality. The path was estimated to 15.5 miles (25 km) long and almost half a mile (0.3 km) wide, with winds reaching 150 mph (241 km/hr). An EF-2 tornado that passed through Tuscaloosa and Jefferson counties with a path 13 miles (21 km) long and half a mile (0.3 km) wide, and winds reaching 130 mph (209 km/hr), was responsible for the other fatality. The storm also produced tornadoes and dangerous conditions in Arkansas on the 22nd. No deaths were reported in that state. Several powerful storms earlier in the month also affected several states and injured dozens of people, including Texas, North Carolina, Ohio, Tennessee, Indiana, Kentucky, and Mississippi. In total, NOAA's Storm Prediction Center reported 47 preliminary tornado reports across the U.S. for the month through January 23rd, making this month potentially one of the top 10 busiest Januaries, with records dating back to 1950. 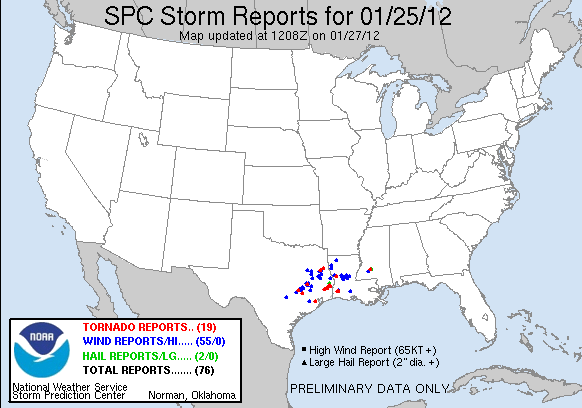 Strong storms produced heavy rain and a dozen tornadoes across eastern Texas on January 25th, according to preliminary reports from NOAA's Storm Prediction Center (SPC). The National Weather Service reported that record rainfall fell across parts of the state as well. In Austin, 5.66 inches of rain fell, making this Austin's all-time wettest January day on record and eighth wettest day among all months. This rainfall includes 2.79 inches that fell in just one hour. San Antonio received its highest daily rainfall on the 25th as well, breaking the previous record of 1.08 inches, set in 1889. More than a dozen people were rescued from the floodwaters in Cedar Creek, a town southeast of Dallas. Dallas-Fort Worth Airport was forced to cancel about 30 outgoing flights. According to local meteorologists, the rain was not enough to alleviate the state's historic drought conditions on record. Generally, short, intense downpours do not allow much water to absorb into the dry ground and most becomes runoff. 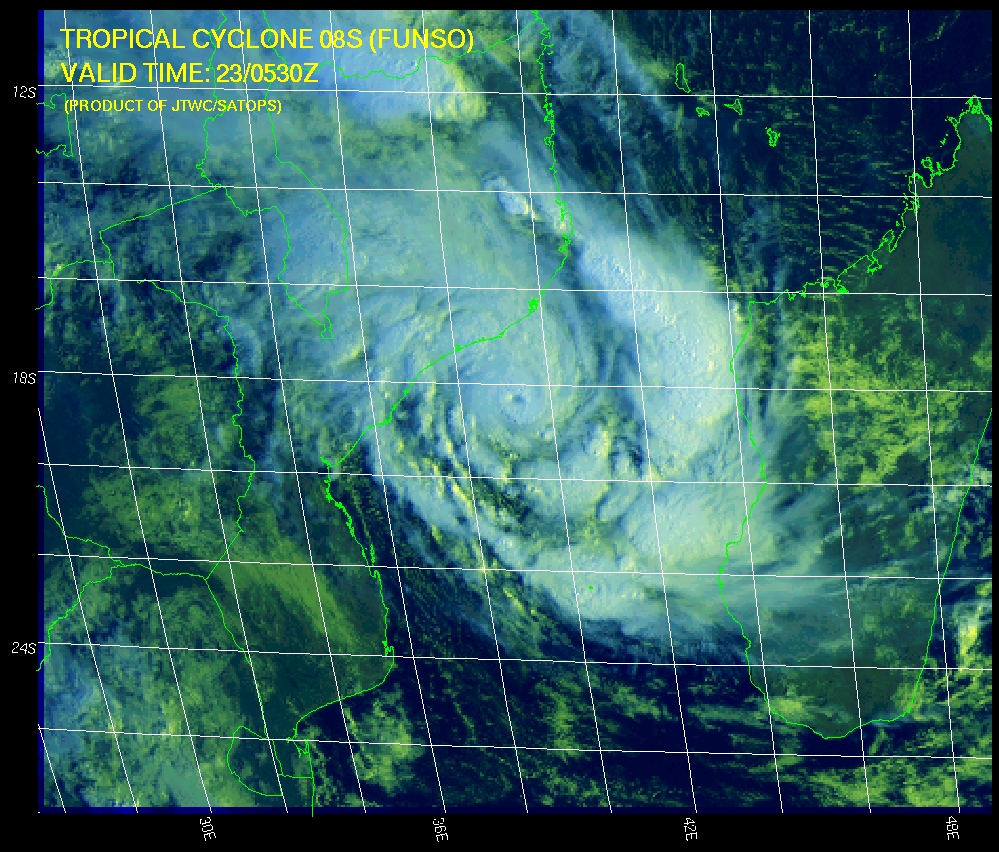 On January 15th, heavy rainfall from Tropical Depression Dando led to major flooding in southern Mozambique and northeastern South Africa. Eleven people were killed,thousands were displaced, and crop and livestock were lost in Mozambique. Southern Gaza and Maputo provinces were among the hardest hit, according to the country's national relief agency. Road access from the north and center of the country to the capital city of Mupato was cut off due to flooding from the Komati River and its tributaries. In South Africa, helicopters were utilized to evacuate tourists from Kruger National Park as roads and bridges flooded. Fifteen people were reportedly killed due to the flooding in Mpumalanga province. Dando was the first tropical cyclone to affect southern Mozambique since 1984. One week later, on January 22nd, Tropical Cyclone Funso killed 15 people in the the central province of Zambezia in Mozambique. While the storm itself did not make landfall, heavy rain and winds from the storm affected land areas. The region is in the middle of its rainy season. 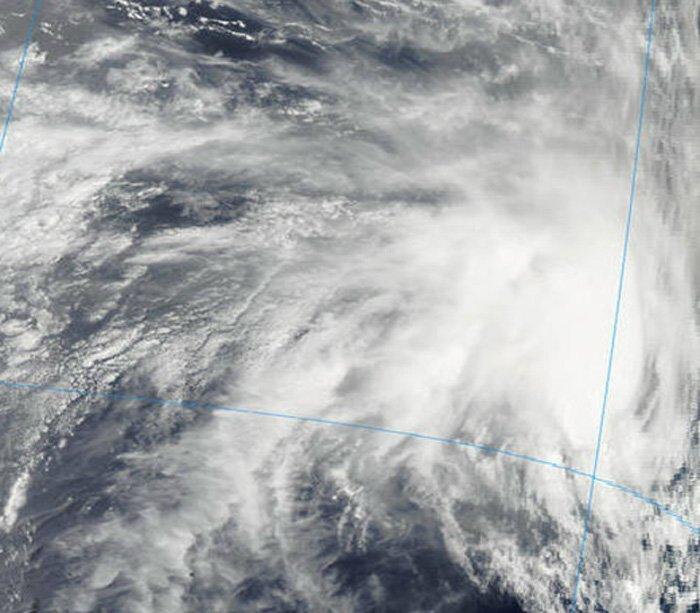 The effects of Tropical Cyclone Iggy brought torrential rainfall and strong winds to Indonesia and Bali between January 26th and 29th. At least 16 people were killed and more than 2,300 homes were damaged or destroyed across 35 districts and cities. 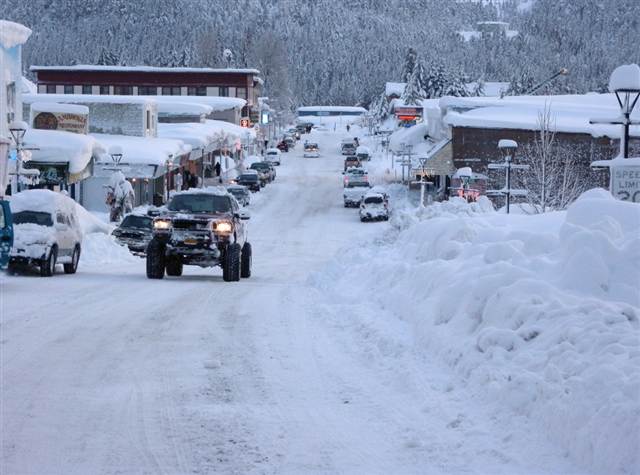 January brought cold temperatures and much above average snowfall to parts of Alaska. One of the hardest hit areas was the town of Cordova. Between November, 2011 and early January, more than 18 feet (5.5 meters) of snow fell, trapping people in their homes, causing roofs on some houses and buildings to buckle under the weight, and triggering avalanches. An avalanche led to the closure of the Copper River Highway, effectively cutting off the link from the town to the airport. At the same time, Nome, Alaska was also cut off from the outside world by thick sea ice and a severe storm in November 2011 had prevented the usual pre-winter fuel delivery. With fuel supplies expected to diminish before the spring thaw, a Russian tanker and the U.S. Coast Guard broke through miles of Bering Strait sea ice to successfully make an unprecedented mid-winter delivery.

In the Pacific Northwest United States, back-to-back storms and cold arctic air brought snow and freezing rain to Oregon and Washington state during the third week in January. At least three people were killed across the two states. Four inches (10 cm) of snow, followed by heavy ice, estimated up to half an inch (13 mm), in Seattle left at least 200,000 residents without power and forced Sea-Tac International Airport to close temporarily. According to NOAA's National Weather Service, the last major freezing rain event in Seattle occurred in December 1996. On January 19th, 23 inches (58 cm) of snow were measured at Mullan, Washington, a region that saw some of the storm's heaviest snowfall totals.

Heavy snow fell across Central and Eastern Europe during the fourth week in January. In Romania, almost 1,000 motorists were stranded and three people died due to frigid conditions. Snow blocked roads into and out of the capital city of Bucharest, cutting the area off from the rest of the country. Twenty-eight flights and 49 trains were canceled due to the poor conditions. One person also died in Bulgaria due to the the sub-freezing temperatures. More than 100 communities in that country lost power and the country's main Black Sea port of Varna was closed due to high winds and heavy snow.