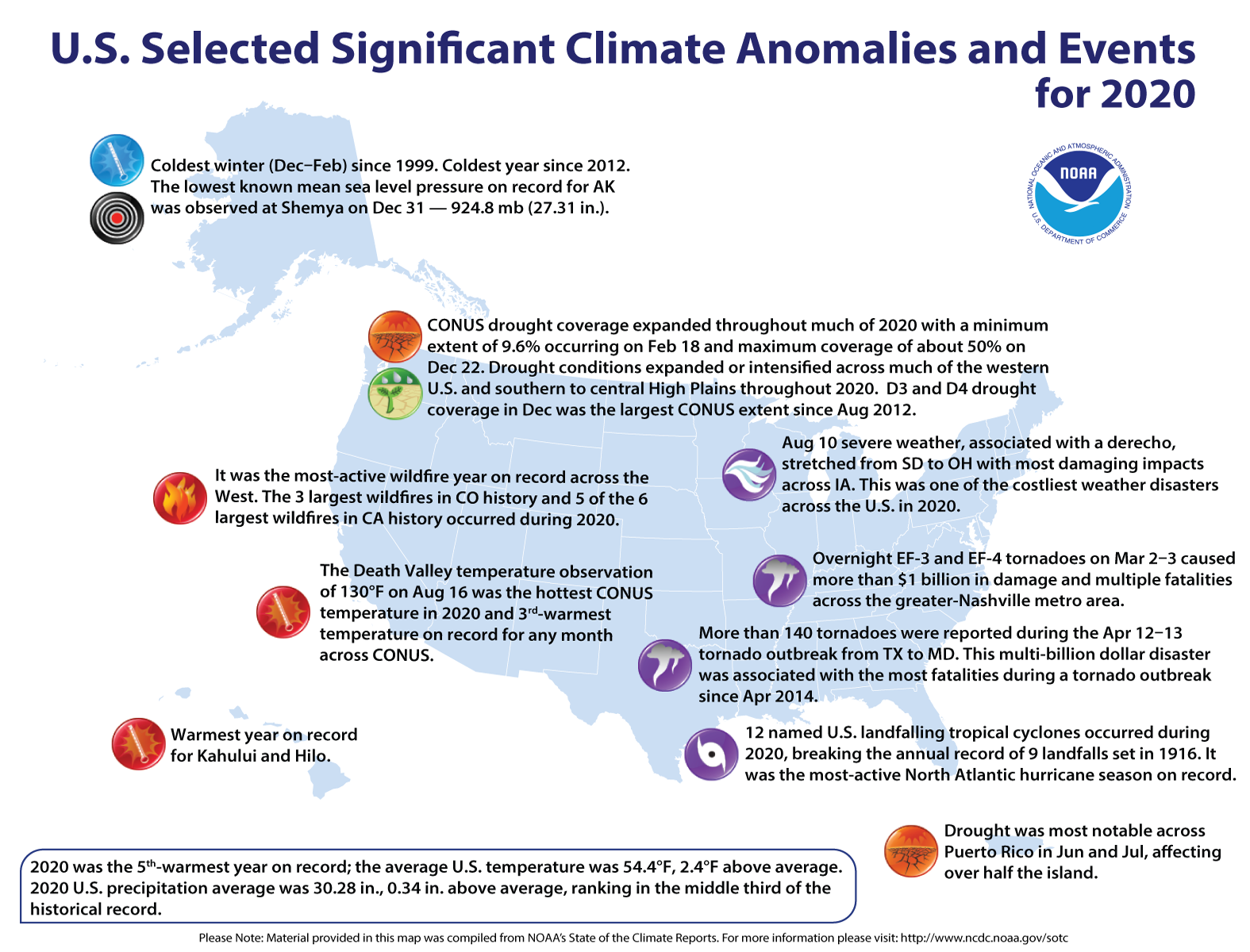 Issued 12 January 2021: Unless otherwise noted, temperature and precipitation rankings refer to a 126-year period of record (1895-2020), and long-term average refers to the 20th century (1901-2000) value. Data for 2020 should be considered preliminary. The most up-to-date temperature and precipitation data is available through Climate at a Glance. 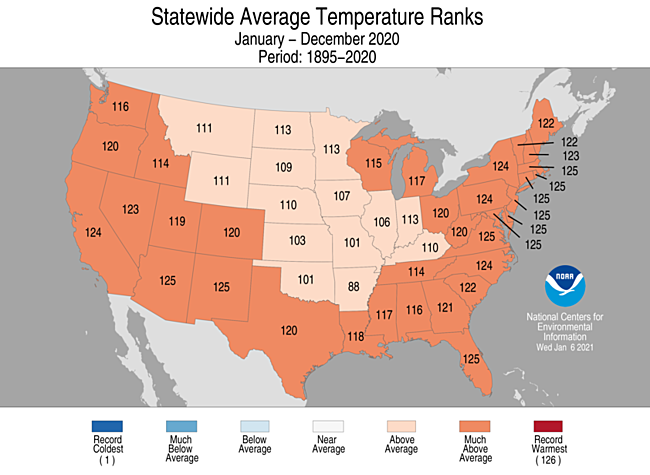 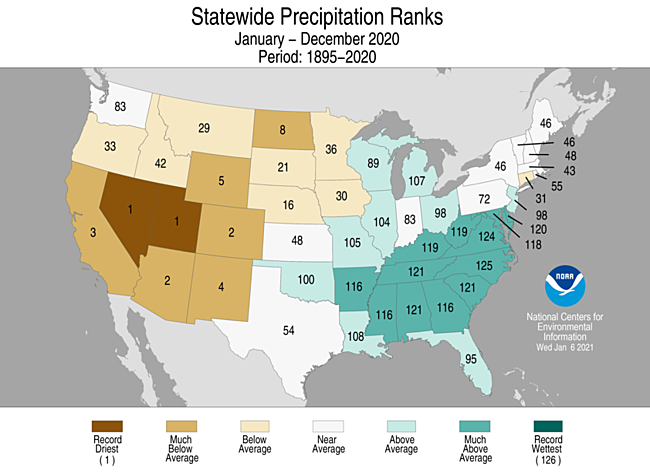 Based on preliminary analysis, the average annual temperature for the contiguous U.S. was 54.4°F, 2.4°F above the 20th century average. This ranked as the fifth-warmest year in the 126-year record. The five warmest years on record have all occurred since 2012.

Most of the contiguous U.S. experienced above-average temperatures during 2020. Ten states across the Southwest, Southeast and East Coast had their second-warmest year on record. There were no areas of below-average annual temperatures observed across the Lower 48 during 2020.

The nationally averaged maximum temperature (daytime highs) was above average for 2020 at 66.3°F, 2.3°F above average, ranking as sixth warmest in the 126-year record. Much of the western half and eastern third of the CONUS experienced above-average maximum temperatures for the year with Arizona ranking warmest on record. Portions of the lower Mississippi Valley had daytime temperatures that were below average during 2020.

Based on NOAA's Residential Energy Demand Temperature Index (REDTI), the contiguous U.S. temperature-related energy demand for 2020 was 31 percent of average and the 7th lowest value in the 126-year period of record.

For the year, warm daily records outpaced cold records by a margin of approximately two to one. There were over 106,000 daily temperature records tied or broken during 2020.

Influenced by warm ocean temperatures, Kahului and Hilo experienced a record-warm year in 2020.

The contiguous U.S. average annual precipitation was 30.28 inches, which is 0.34 inches above the long-term average, ranking in the middle third of the historical record.

Above-average annual precipitation was observed from the Great Lakes and Plains to the Southeast and Mid-Atlantic regions. North Carolina had its second-wettest year on record during 2020 and Virginia was third wettest. Below-average precipitation fell across much of the West, northern Plains and parts of the Northeast. Nevada and Utah ranked driest on record for 2020 with two additional western states ranking second driest. In fact, Utah's 7.23 inches of annual precipitation was 0.89 inches less than the previous record set in 1956.

According to the U.S. Drought Monitor (USDM), drought coverage expanded throughout much of 2020 with a minimum CONUS extent of 9.6 percent occurring on February 18 and maximum coverage of approximately 50 percent on December 22. Extreme (D3) and exceptional (D4) drought covered about 22 percent of the CONUS on December 29 — the largest extent of D3 and D4 drought since August 2012 (24 percent). Drought conditions expanded or intensified across much of the western U.S. and southern to central High Plains throughout 2020 with persistent above-average temperatures and precipitation deficits in place across much of the West. Much of New England experienced the emergence of drought during the second half of 2020 with marked improvement by the end of the year. Hawaii’s peak drought extent occurred during November with approximately 74 percent coverage. June and July were Puerto Rico’s most significant drought months with over 50 percent coverage; Alaska was nearly drought free during most of 2020. 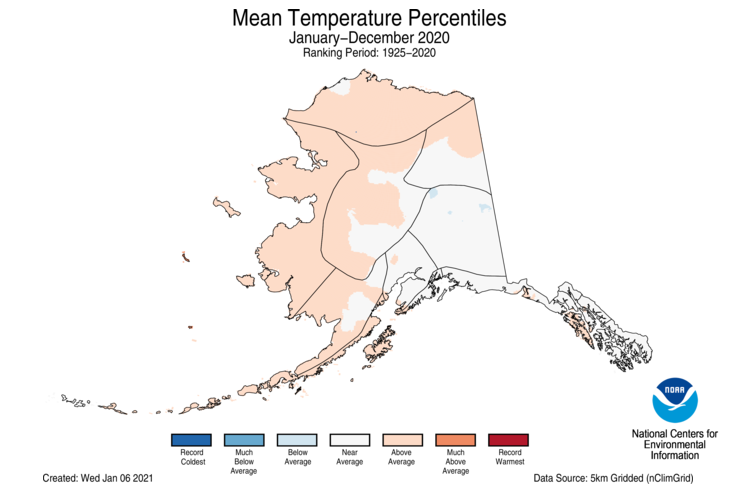 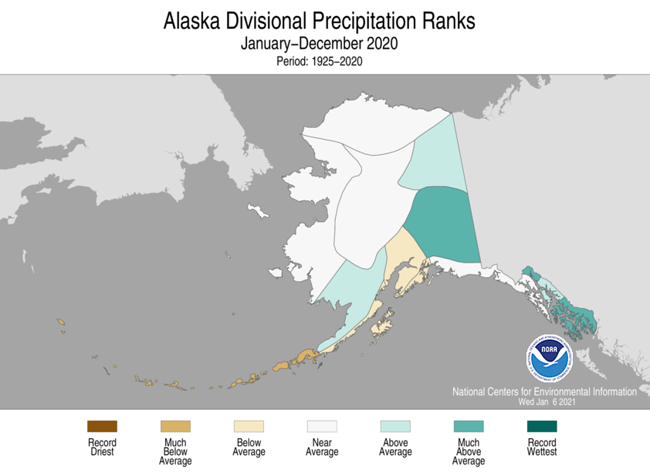 Despite a cold start to the year in Alaska, the statewide average annual temperature was 27.5°F, 1.5°F above the long-term average and was the coldest year since 2012. Above-average conditions were observed across much of the North Slope, West Coast and the Aleutians, primarily due to the lack of coastal sea ice. Above-average temperatures were also seen in portions of Bristol Bay, Central Interior and Northeast Interior regions. Below-average temperatures occurred across parts of the Southeast Interior region. Alaska experienced its coldest first two months of the year in 2020 and coldest winter (December 2019 - February 2020) since 1999. In October, Arctic sea ice concentration was the lowest value since the satellite records began.

On December 31, a strong low-pressure system over the north Pacific Ocean deepened to 921 millibars (27.20 inches of mercury) as it crossed over Attu Island, the westernmost of the Aleutian Island chain. The center of low pressure for this storm is the lowest known pressure in or around Alaskan waters. The lowest known mean sea level pressure on record in Alaska was recorded on the 31st on Shemya Island at Eareckson AFB and registered at 924.8 millibars (27.31 inches of mercury). This value will be evaluated by the State Climate Extremes Committee later in 2021 to determine if a state record for lowest mean sea level pressure will be established.

The following locations had notable temperature records during 2020:

The following locations had notable precipitation records during 2020: