The main driver of climate variability in March was a persistently negative Pacific/North American (PNA) pattern that featured a ridge over the North Pacific, a trough along the West Coast, and a ridge in the Southeast. The trough brought cooler than normal temperatures to the West Coast. For much of the month, it was also associated with a trough off the coast of California that brought much-needed moisture to the Southwest. At times, that moisture came too quickly and led to flash flooding. The ridge over the Southeast brought hot and dry conditions, particularly for the Gulf Coast and Florida where they led to a flash drought.

The other two major factors for March were a continuing positive Arctic Oscillation (AO) and variations in the East Pacific Oscillation (EPO). Alaska found itself wedged between a strong polar low associated with the positive AO and the ridge in the North Pacific. Early in the month, the positive EPO enhanced the polar trough over Alaska, continuing the below normal temperatures there from February. As the EPO transitioned to negative later in the month, the ridge intensified and expanded over Alaska. The resulting warm temperatures largely countered the below-normal temperatures from earlier in the month, resulting in near-normal conditions for the month as a whole. 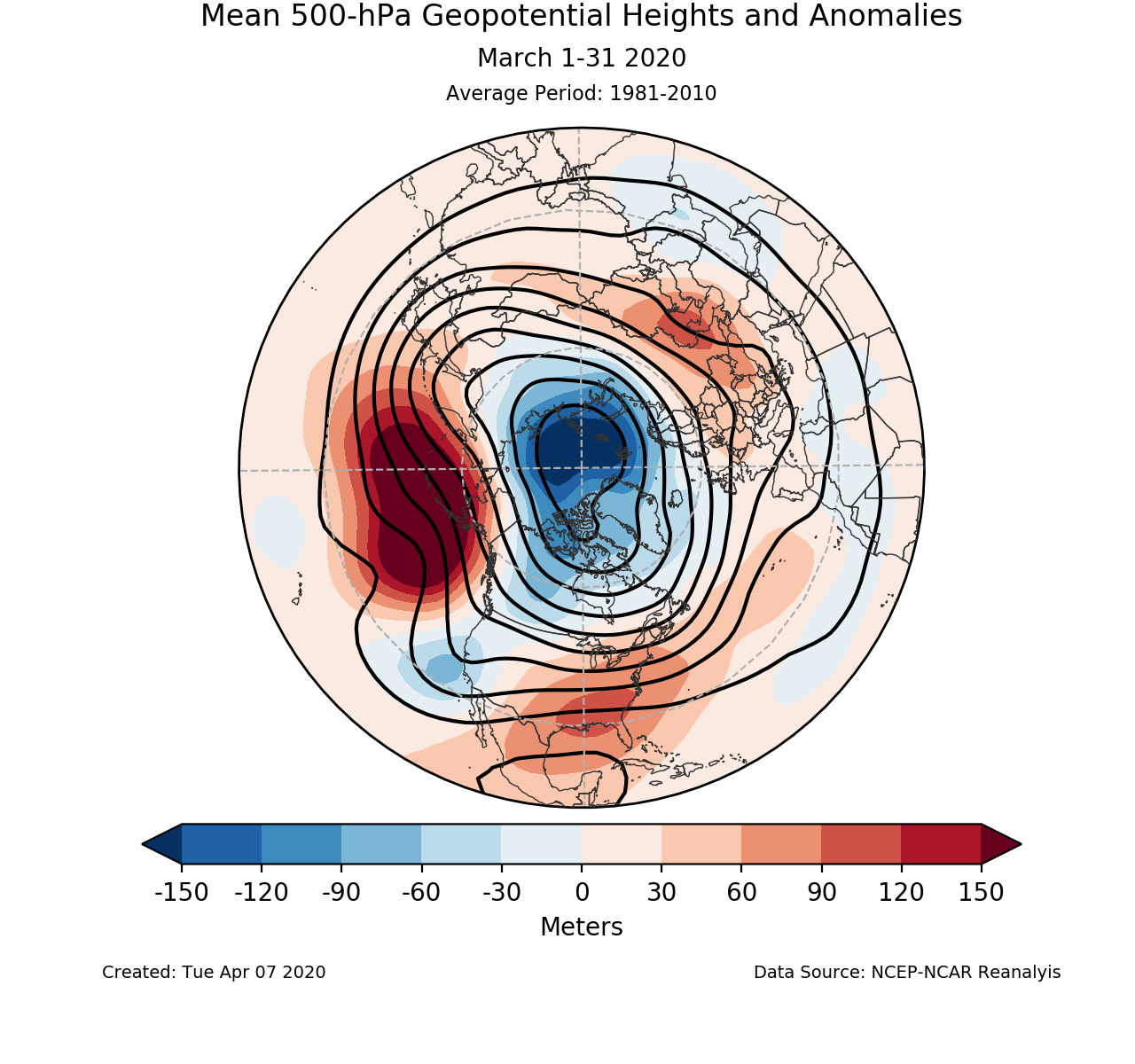 500-mb mean circulation for the Northern Hemisphere for March 2020 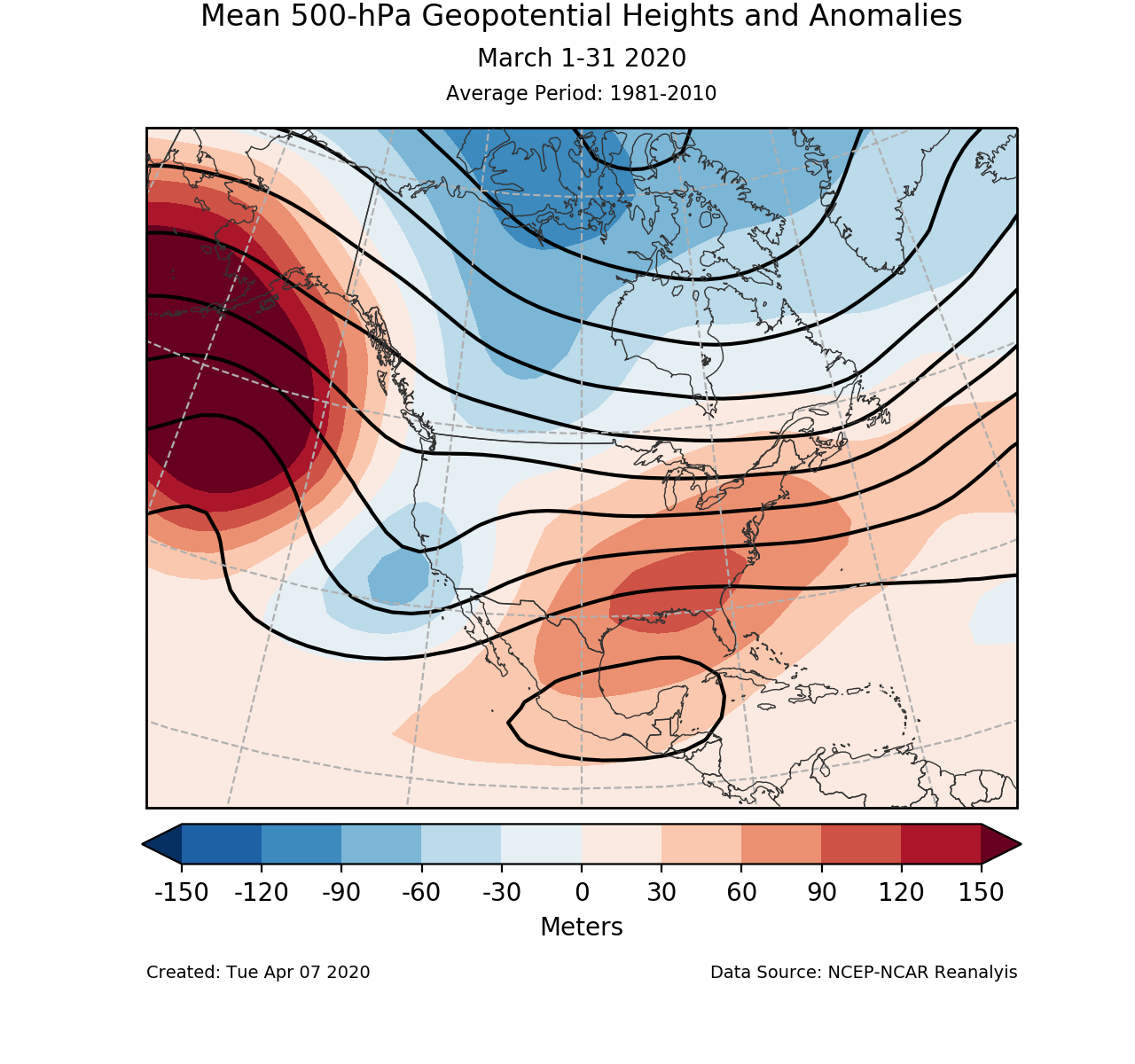 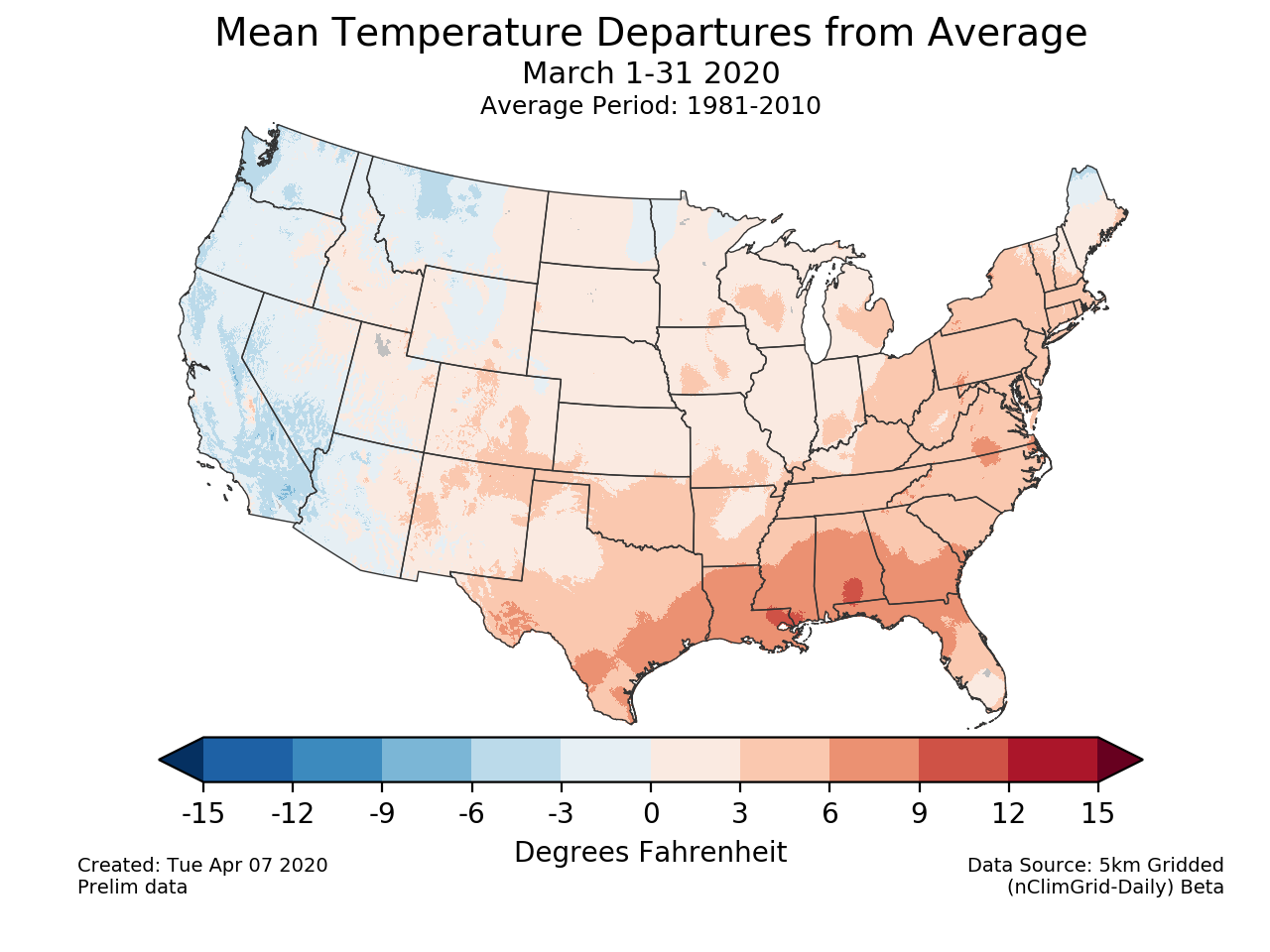 Temperature anomalies (departure from normal) for the CONUS for March 2020 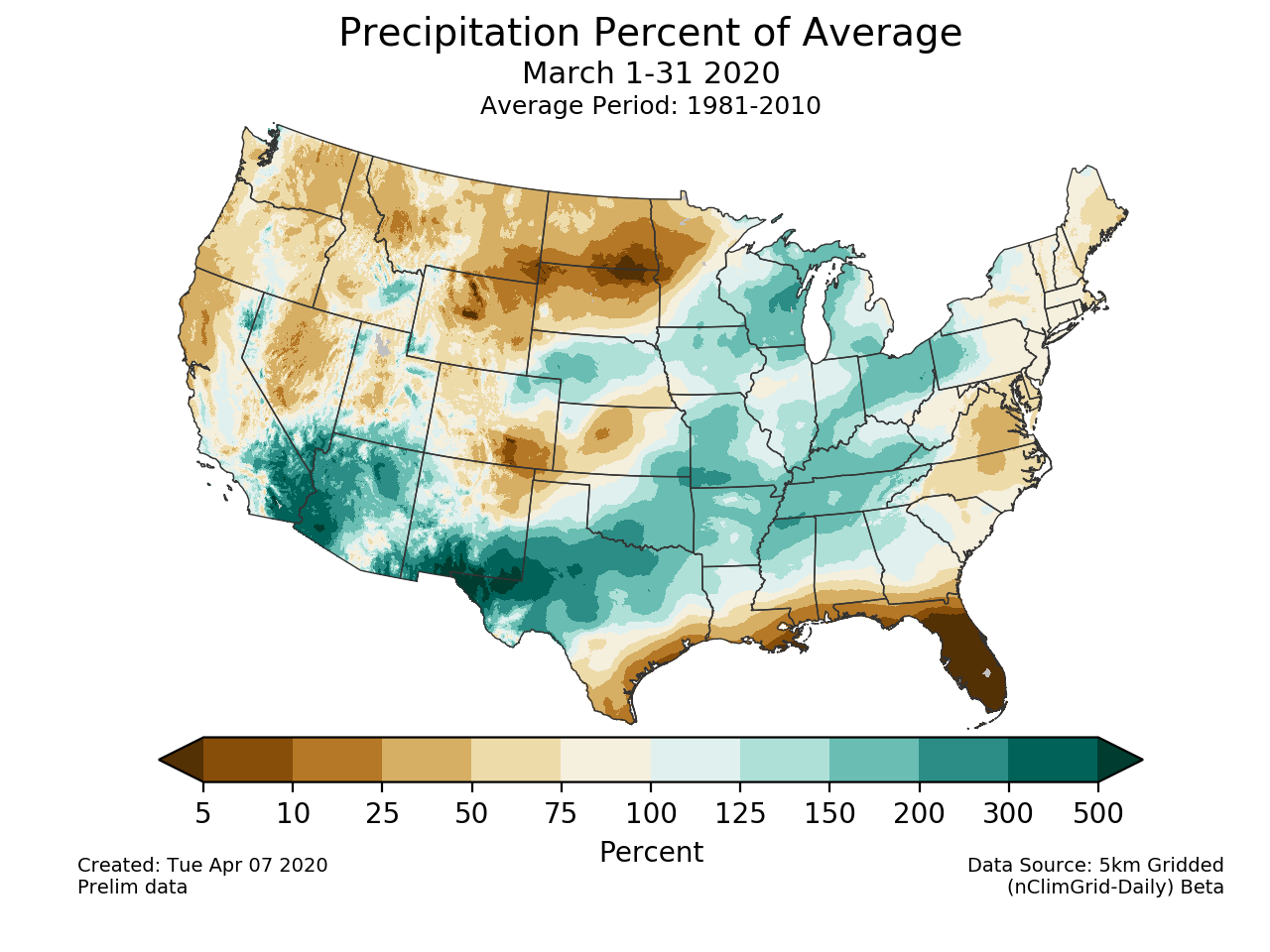 Precipitation anomalies (percent of normal) for the CONUS for March 2020 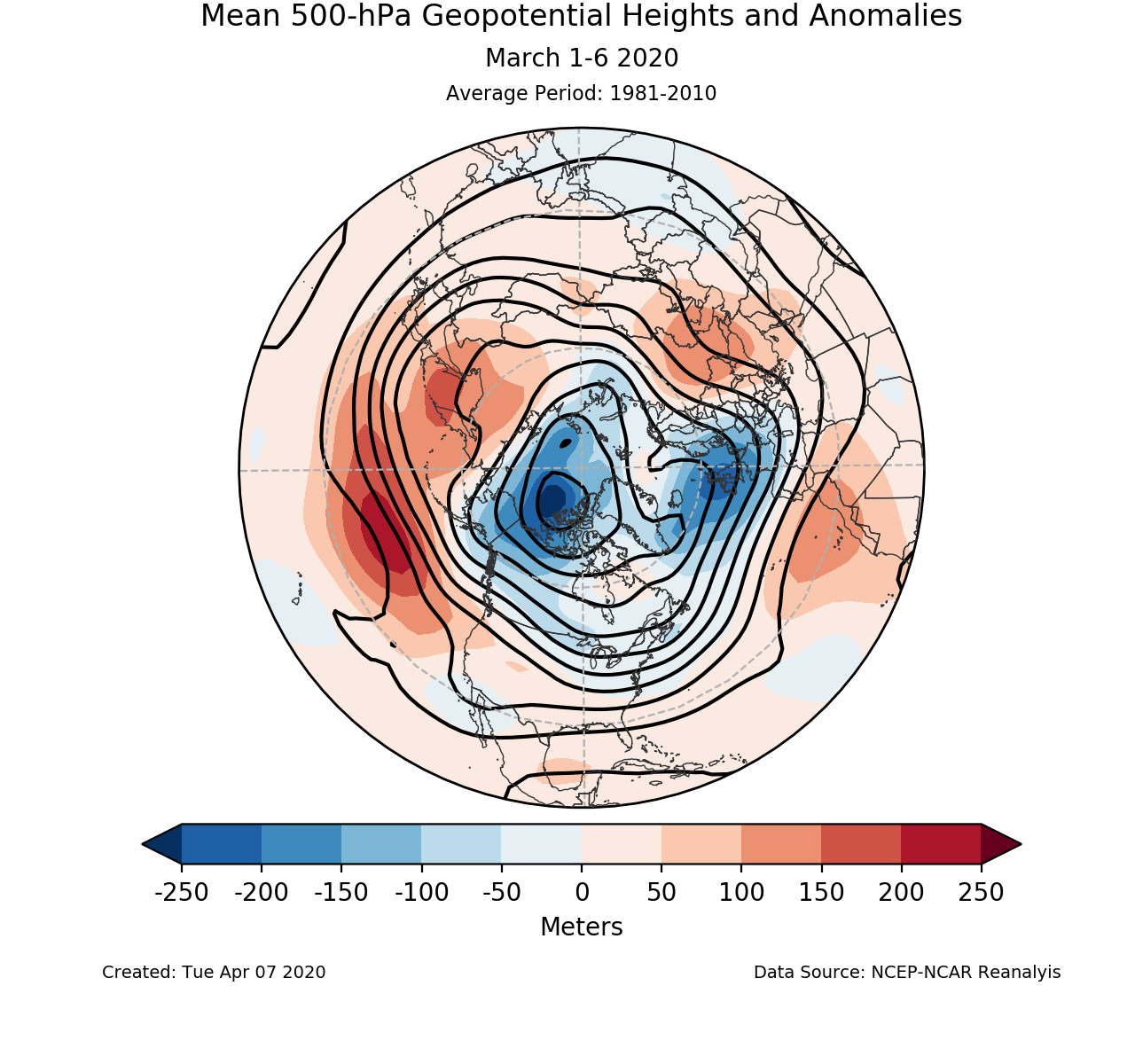 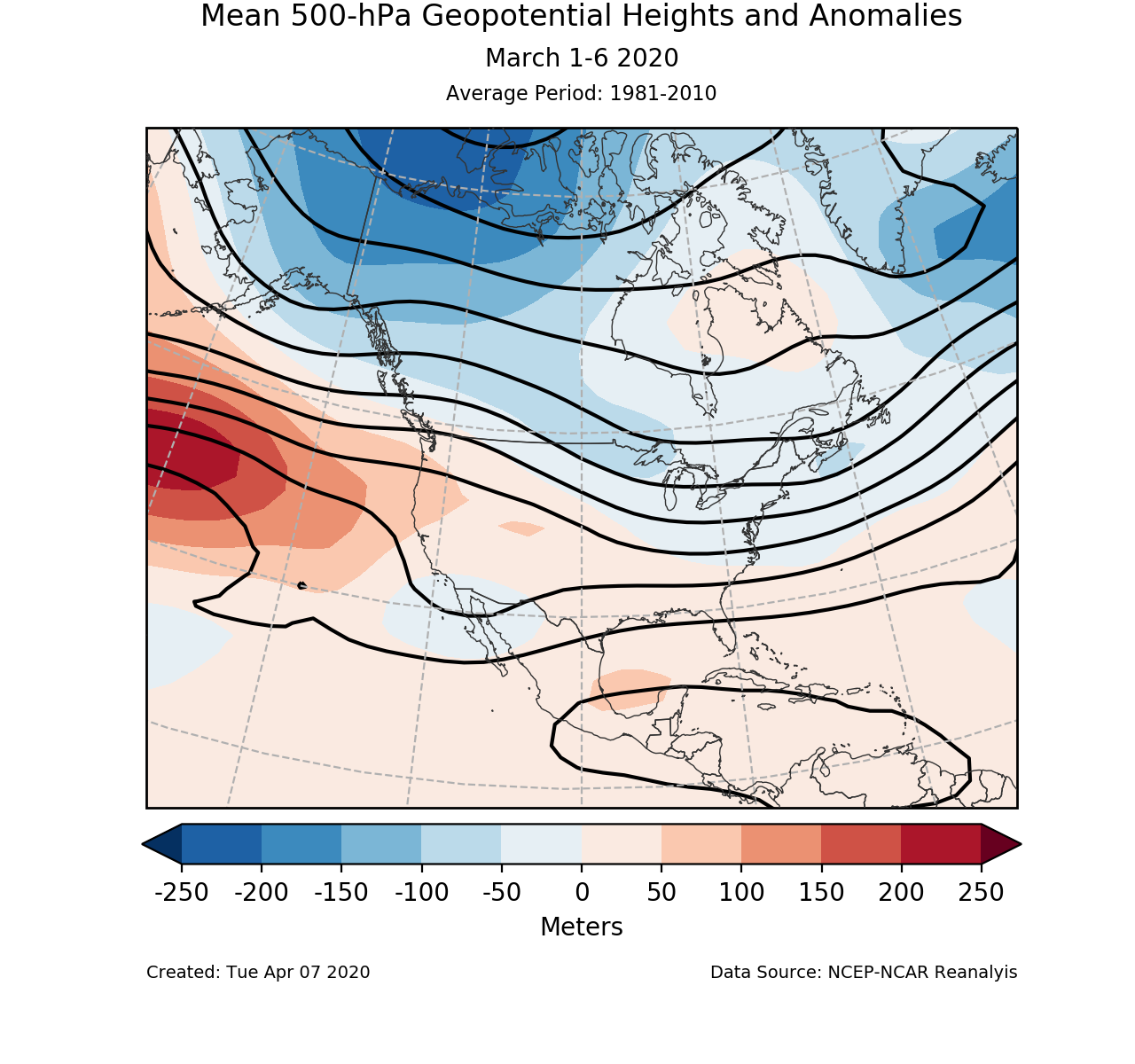 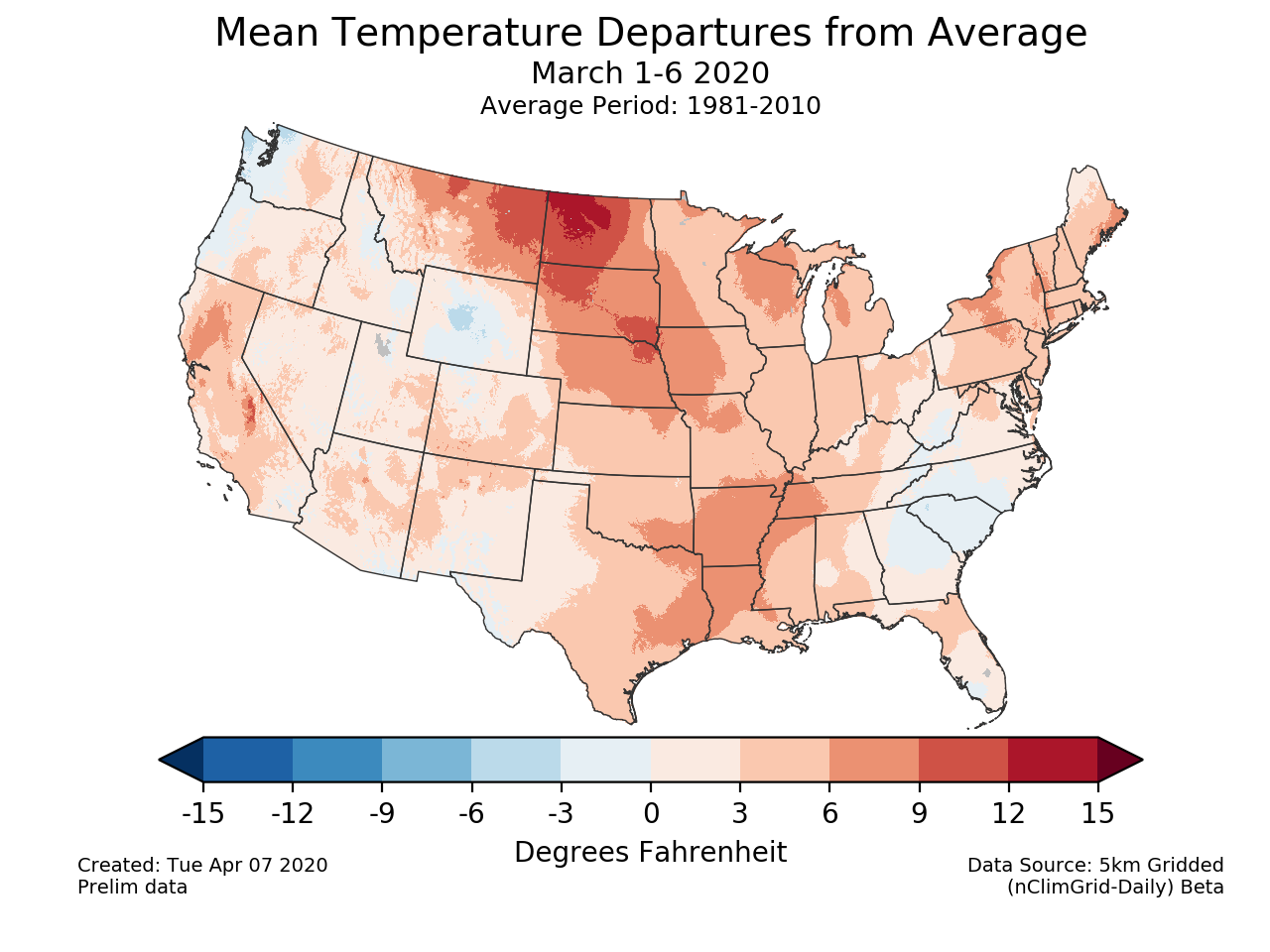 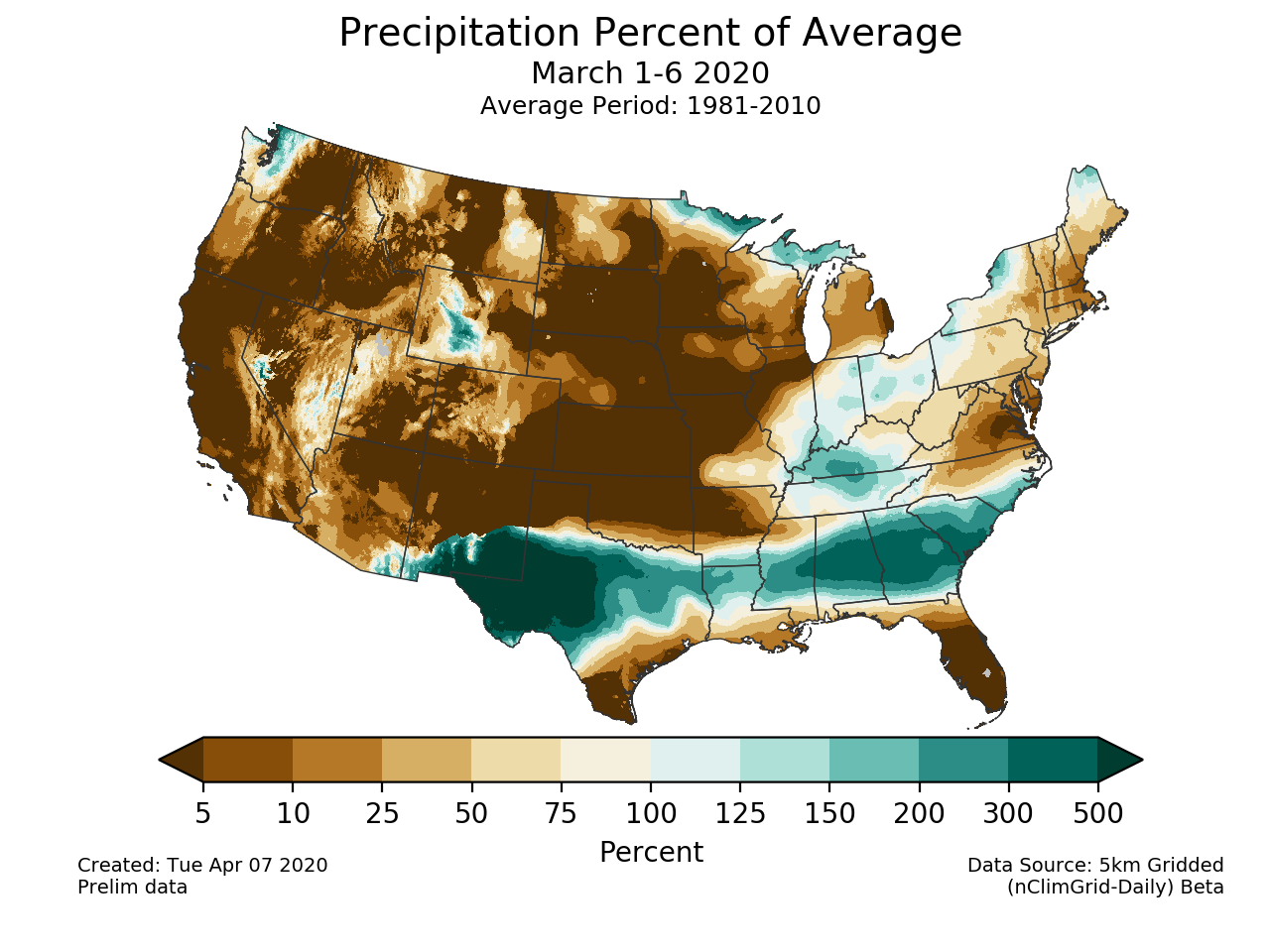 March began with warm temperatures along the Mississippi Valley in advance of a strong cold front. That warm, moist air fueled a deadly tornado outbreak in Tennessee. It also brought heavy rain to a swath of the southeast. Conspicuously, none of that precipitation fell on the Gulf Coast, including Florida, a pattern that would continue throughout the month. The rest of the CONUS was dry during this period. Meanwhile, Alaska continued to be influenced by the polar trough that brought below normal temperatures there in February. 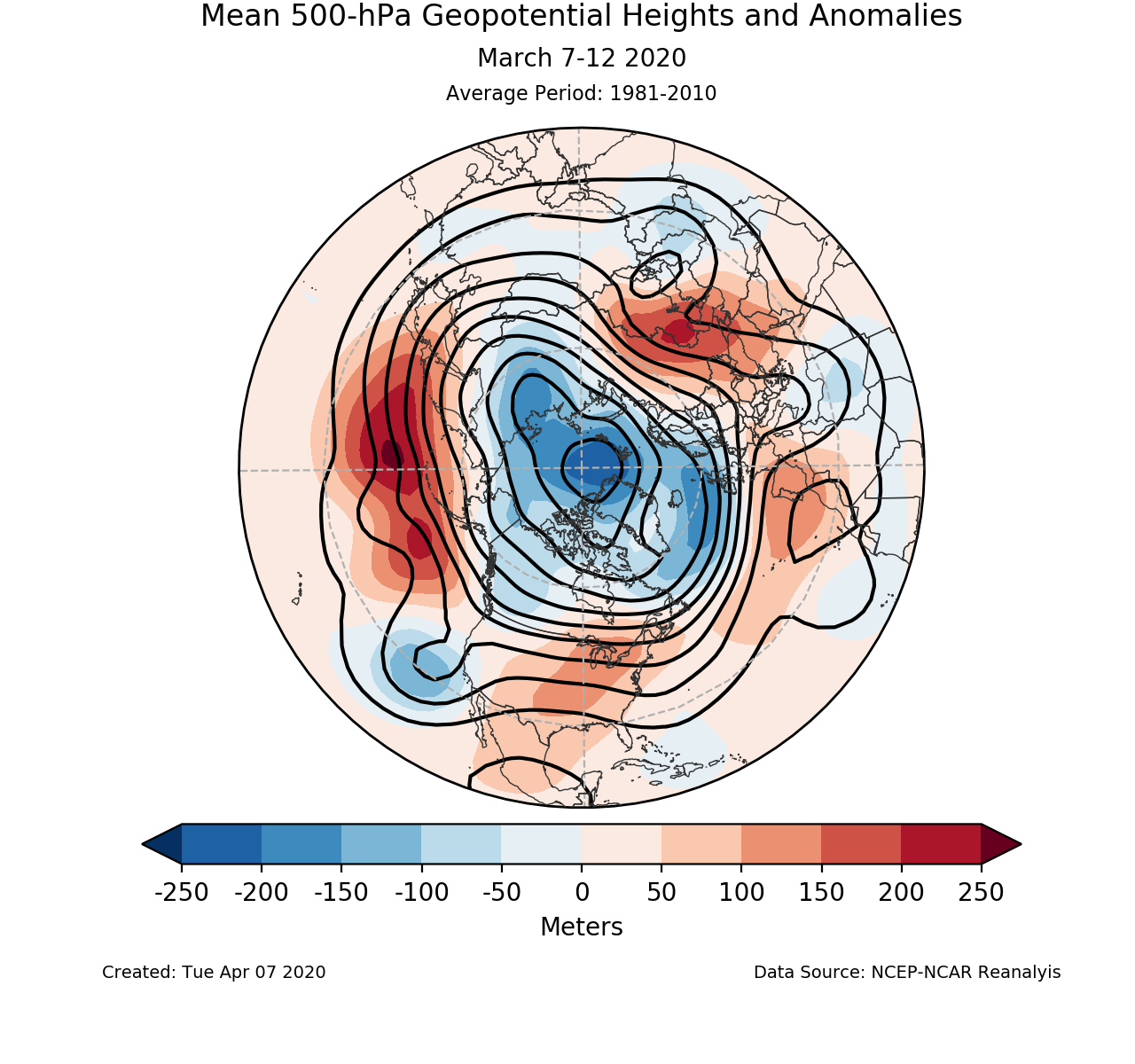 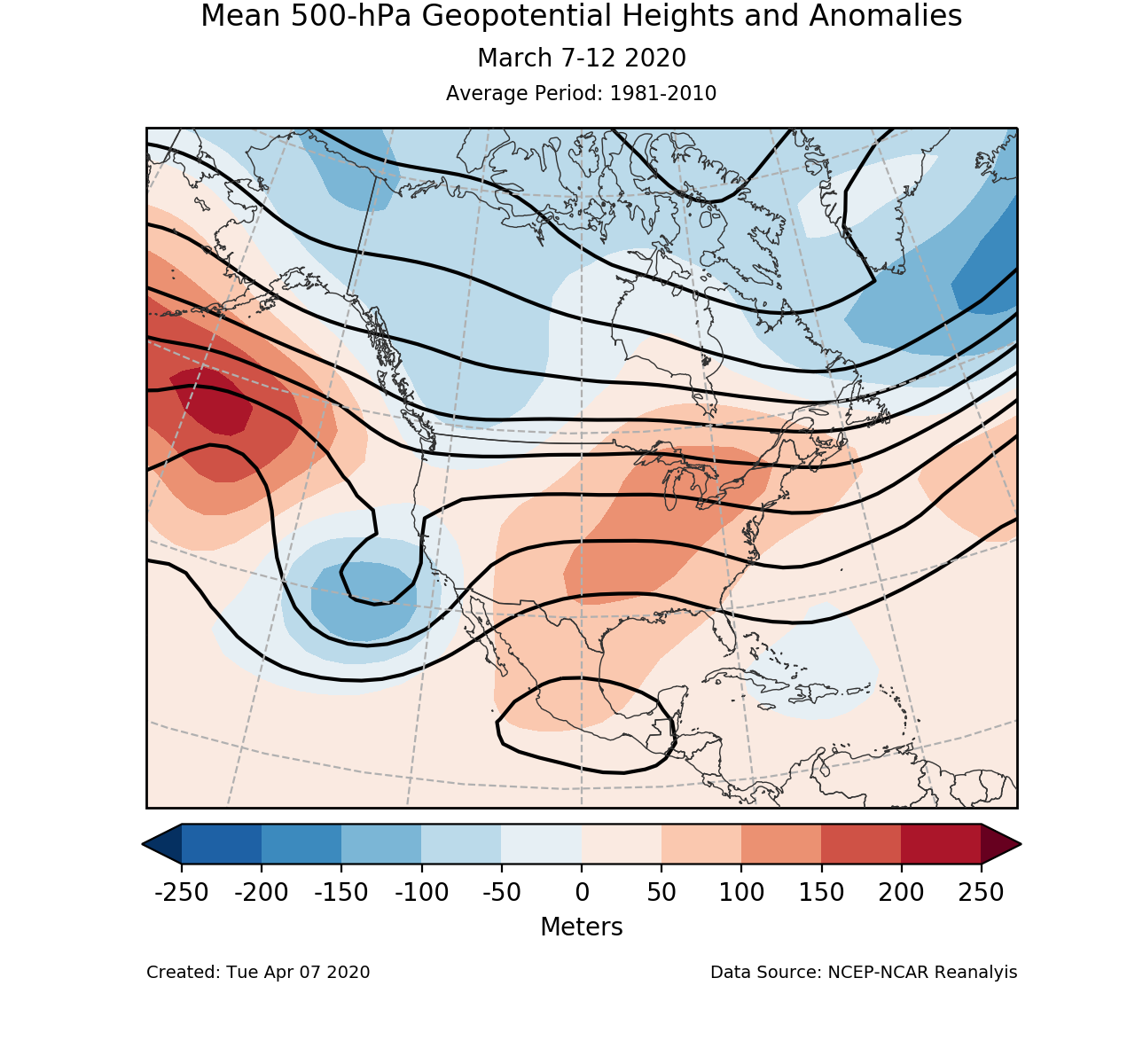 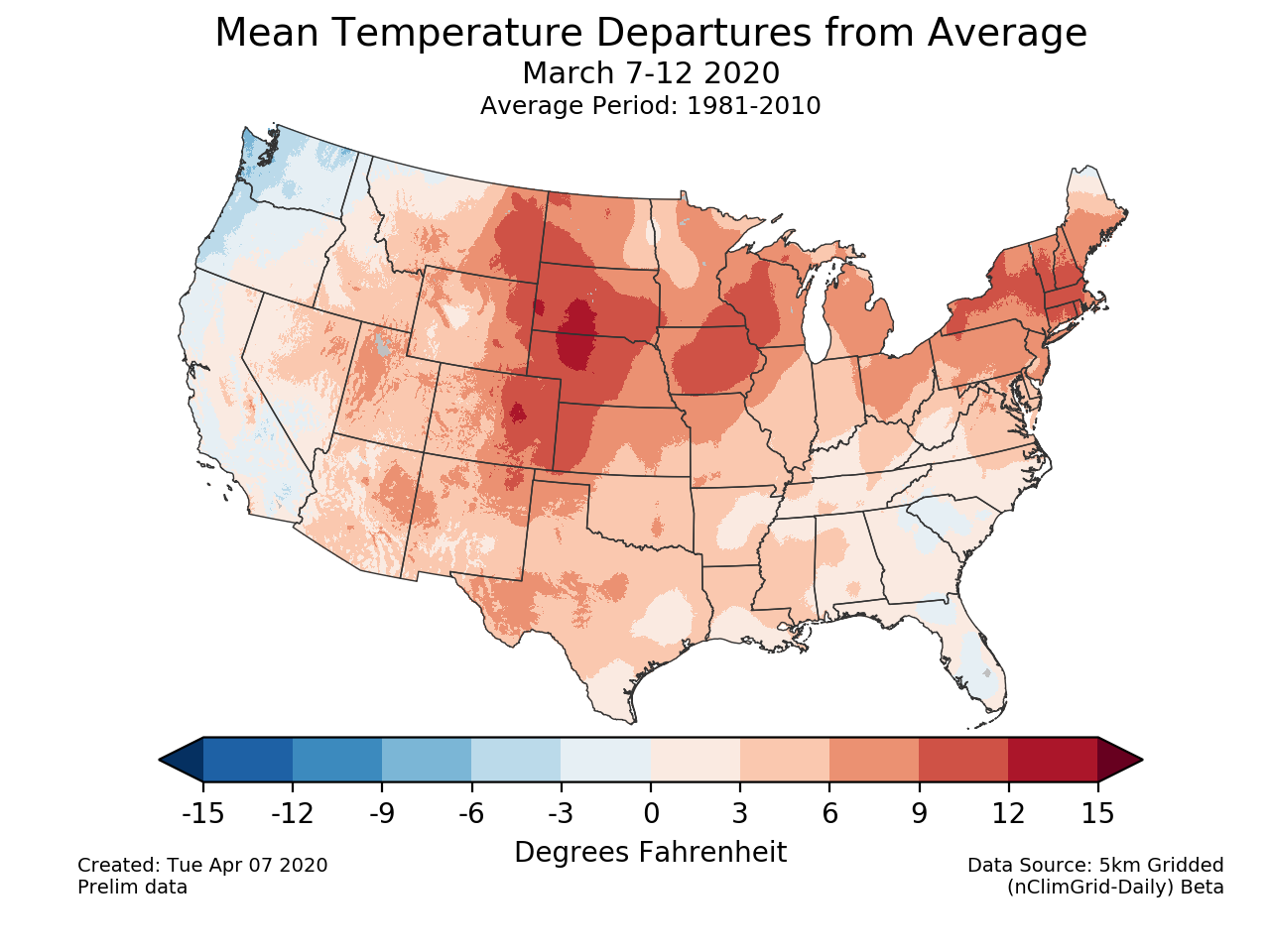 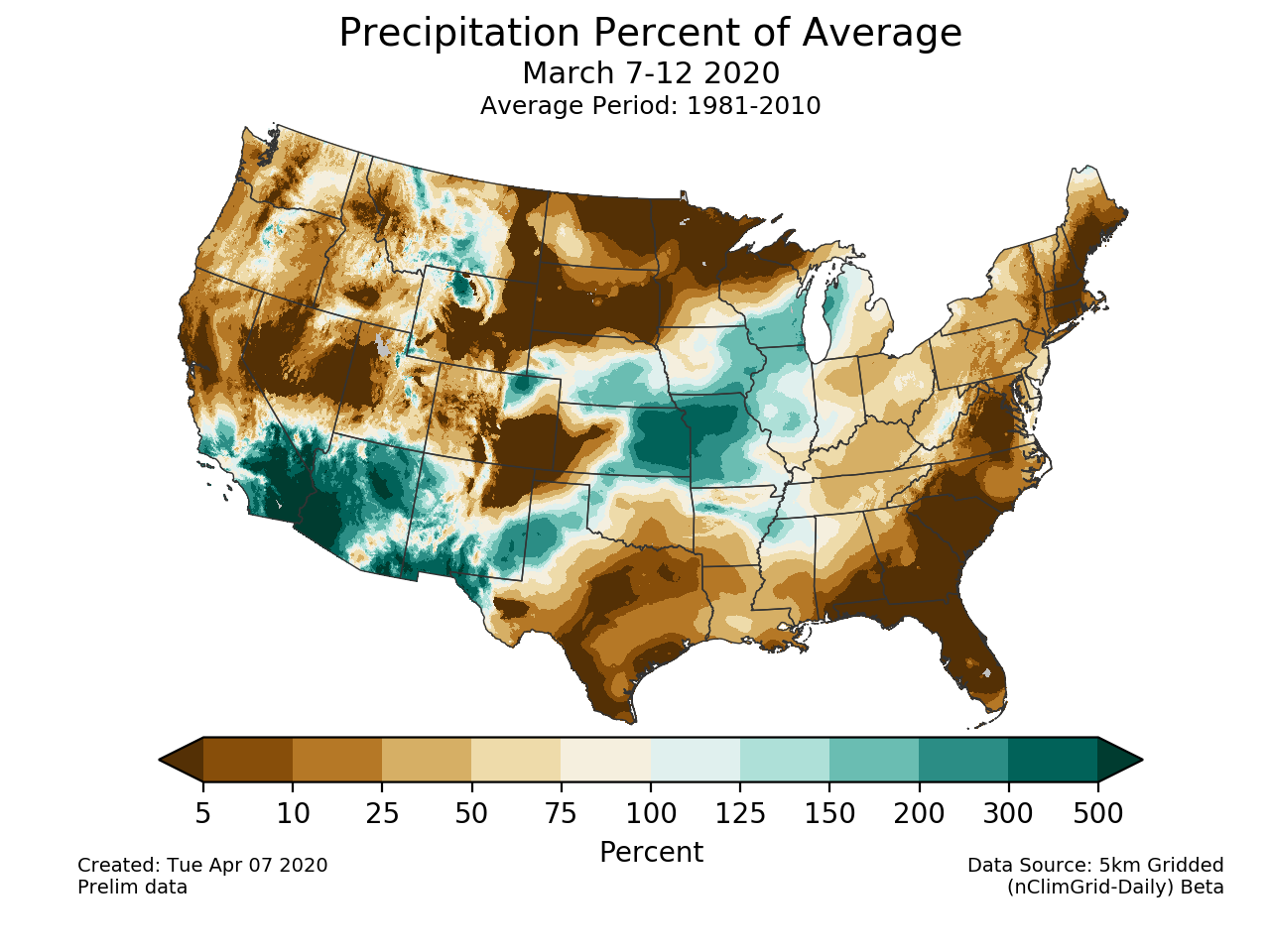 During March 7-12, a ridge in the central U.S. brought warm temperatures across much of the country. Meanwhile, a trough developed off the California coast. Moisture from that trough brought much-needed precipitation to the Southwest U.S. and southern California. 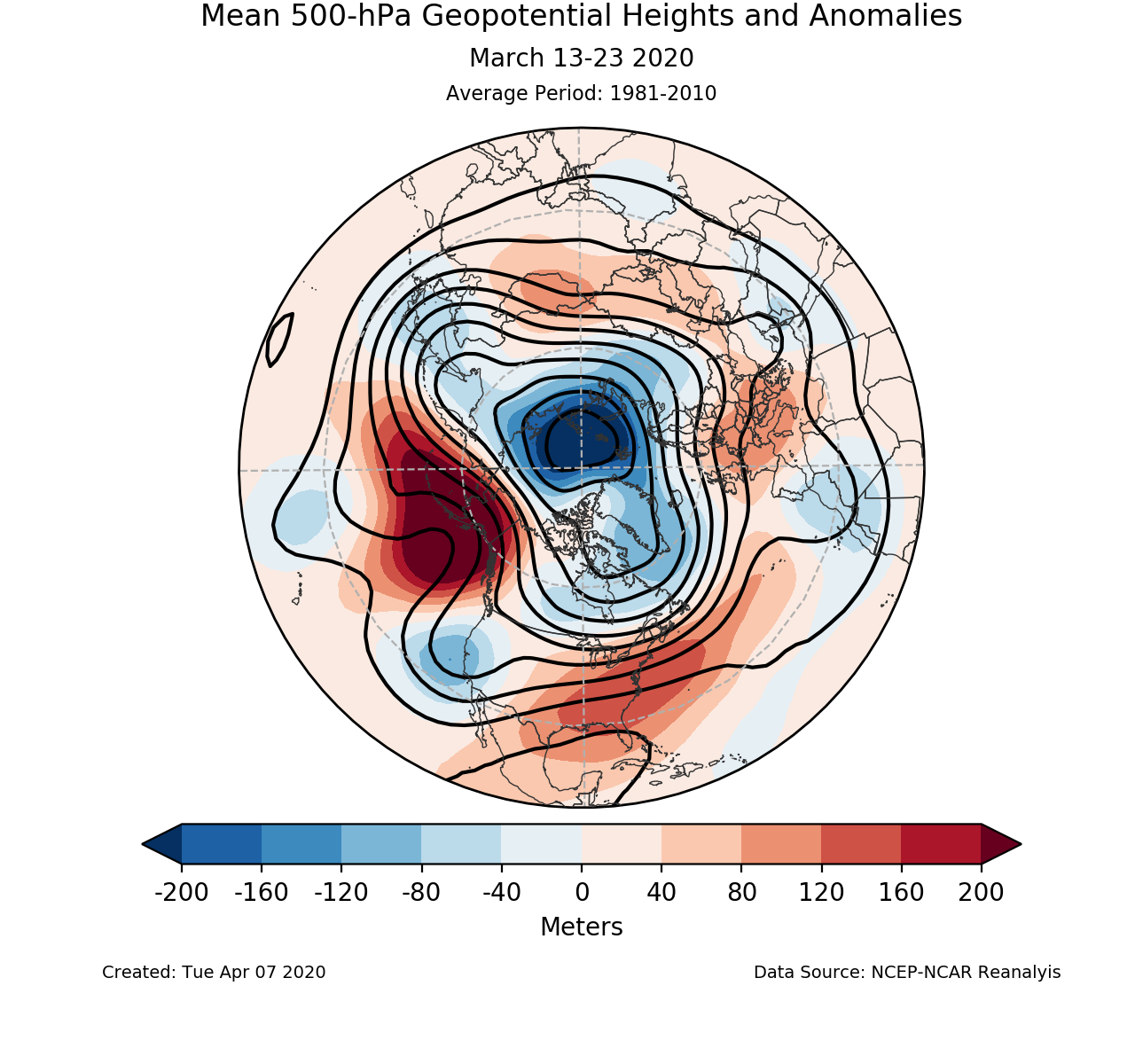 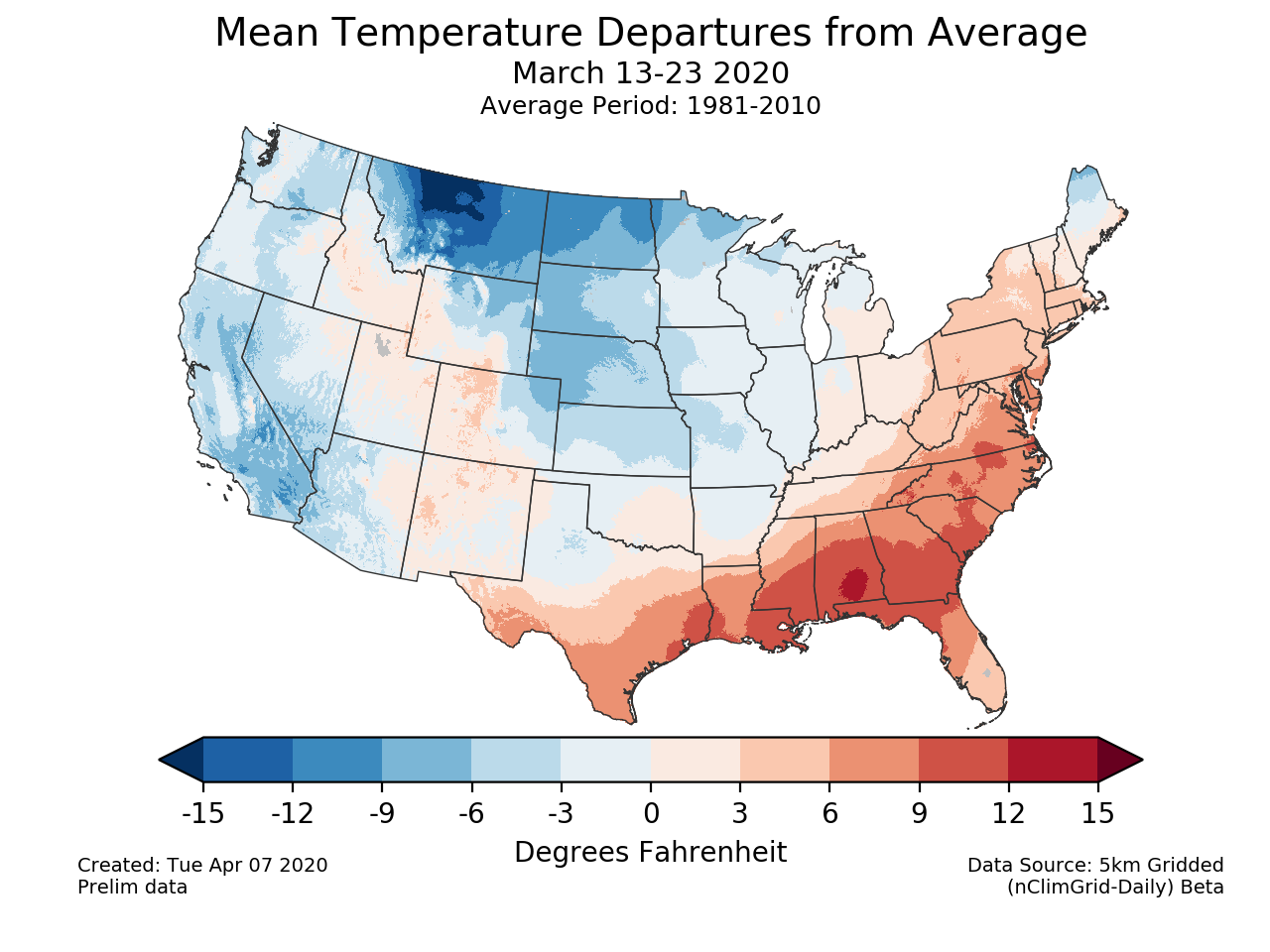 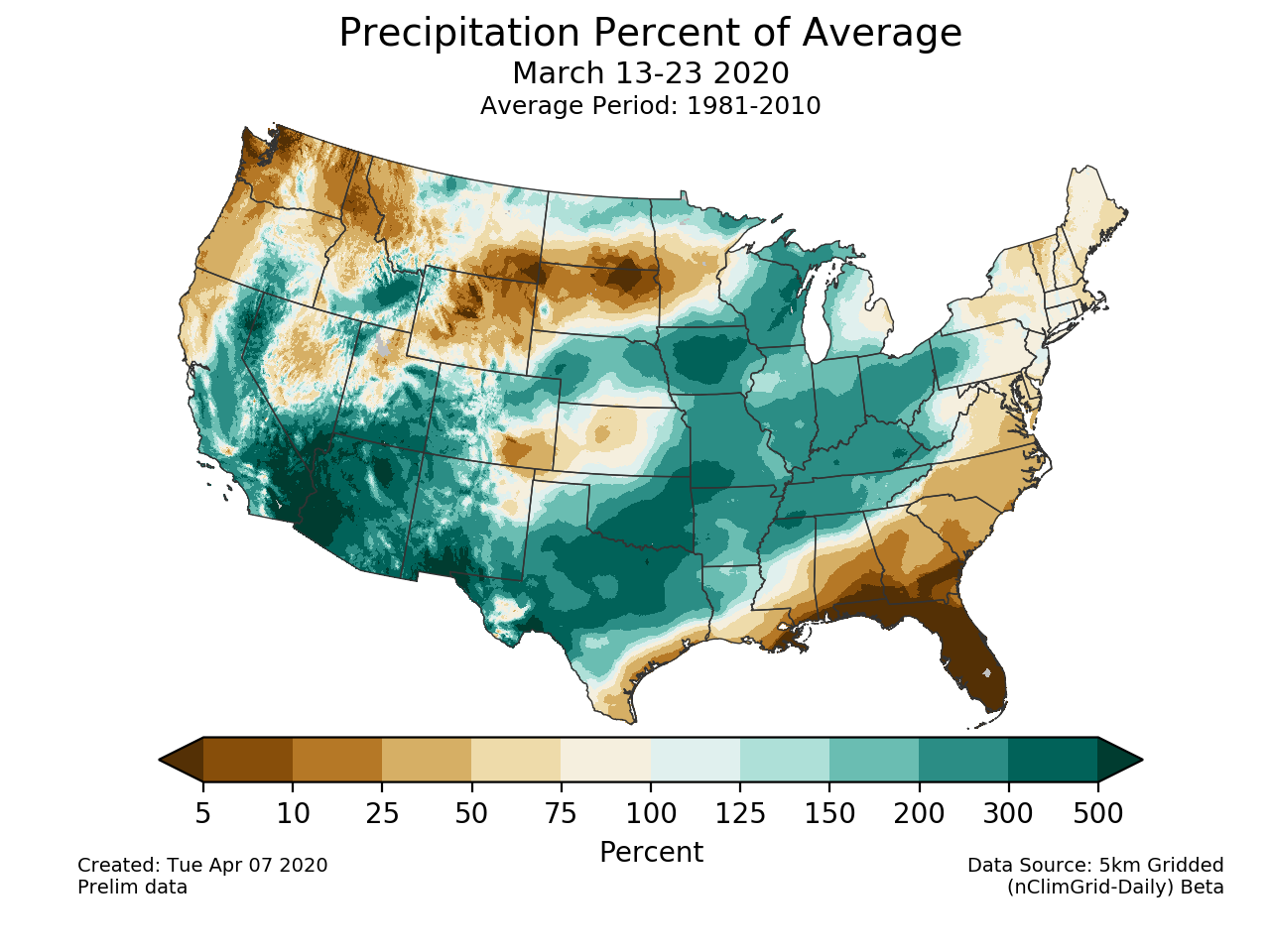 A strong ridge developed over Alaska in the middle of March. To its south, a trough persisted near the California coast, and the ridge over the eastern U.S. strengthened and moved southeastward. The resulting pattern combined aspects of both the negative PNA and the negative EPO. The ridge over Alaska brought warm temperatures that largely countered the cooler anomalies from earlier in the month. The trough near California continued to bring moisture to the Southwest. While the moisture was needed to counter drought conditions, it came too quickly and led to flash flooding. This trough was also connected to a broader trough in eastern Canada that brought cool anomalies to the Northern Plains and precipitation to much of the central U.S. However, the ridge to its east continued the hot and dry conditions for the Southeast. 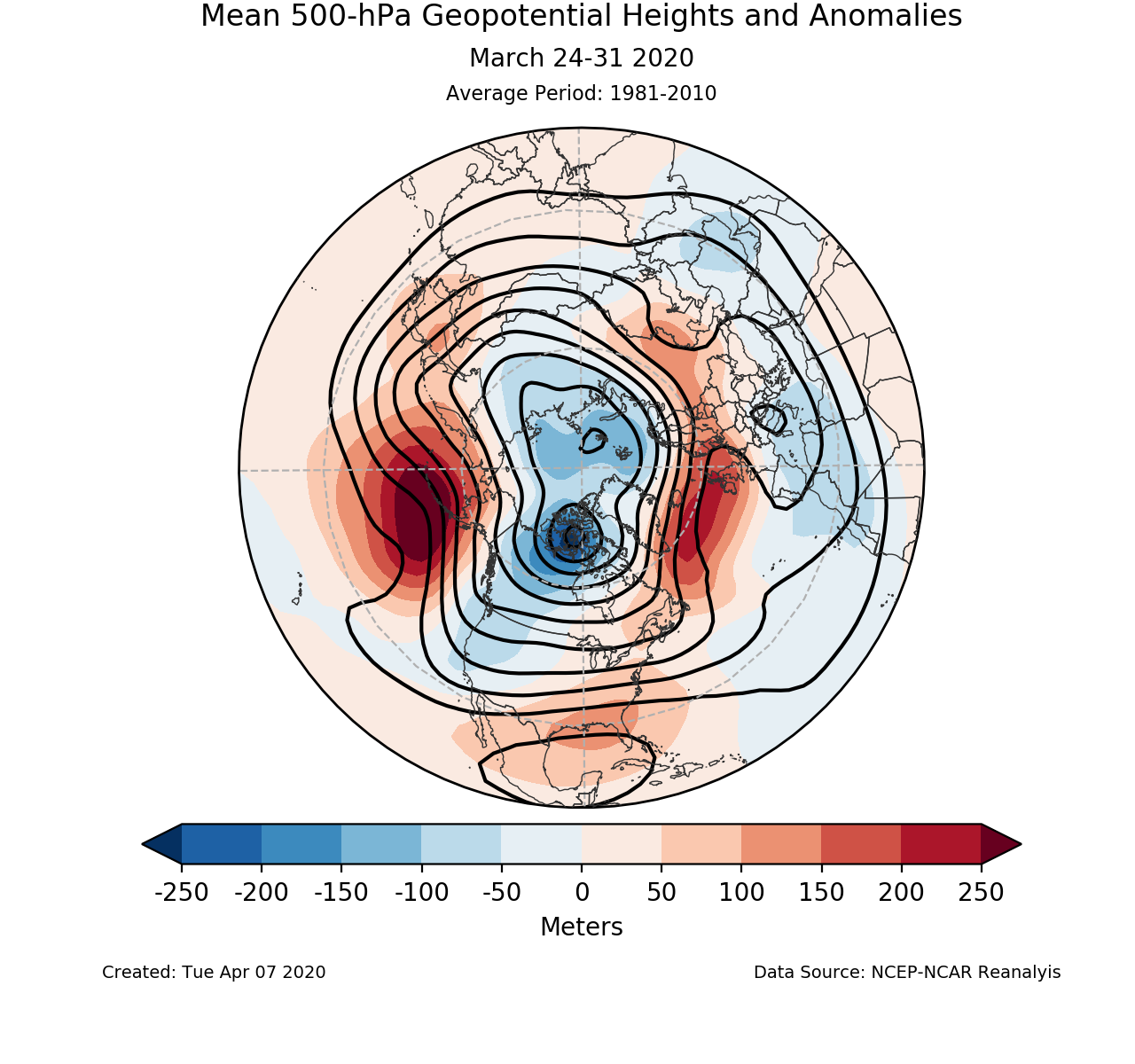 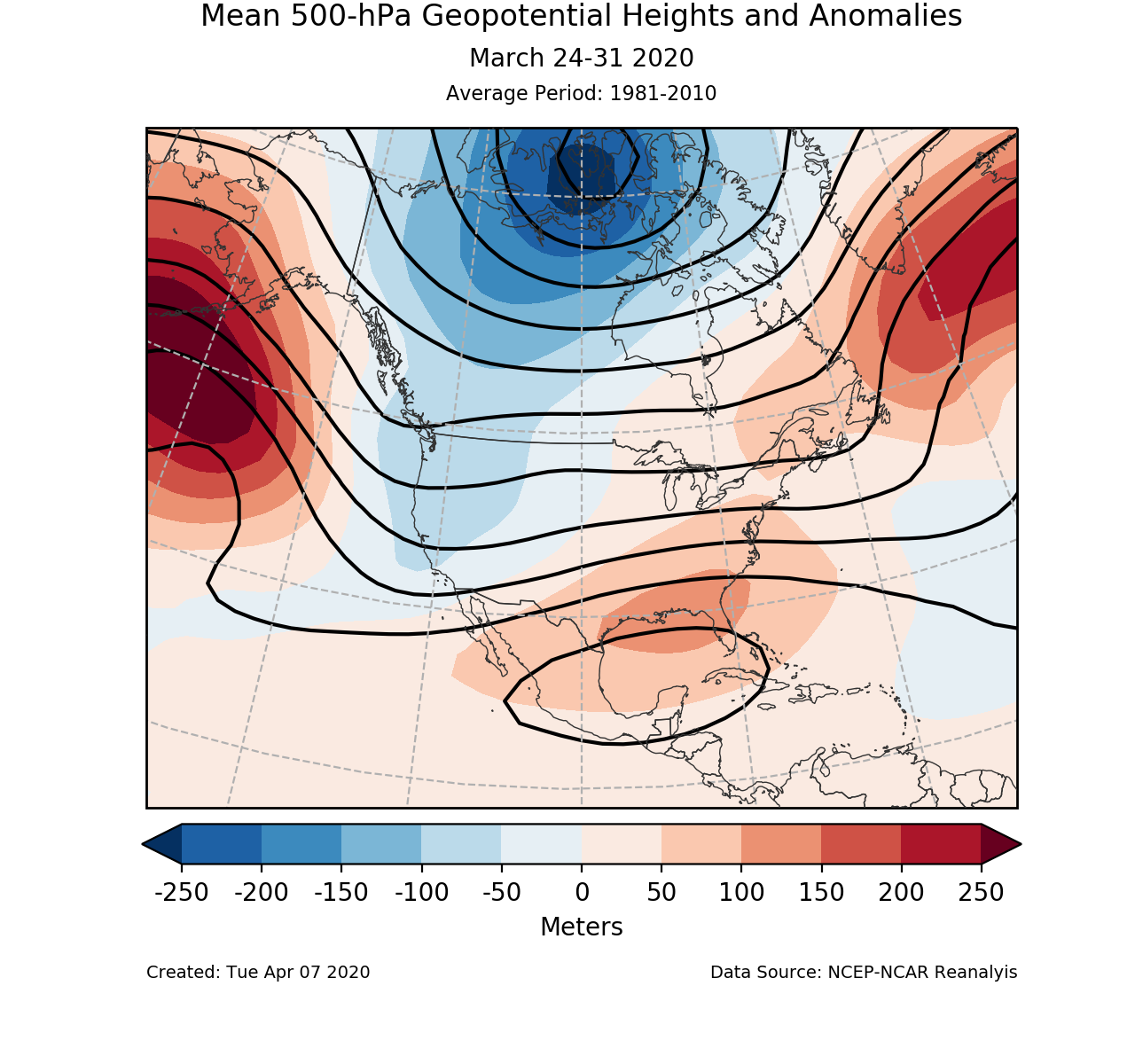 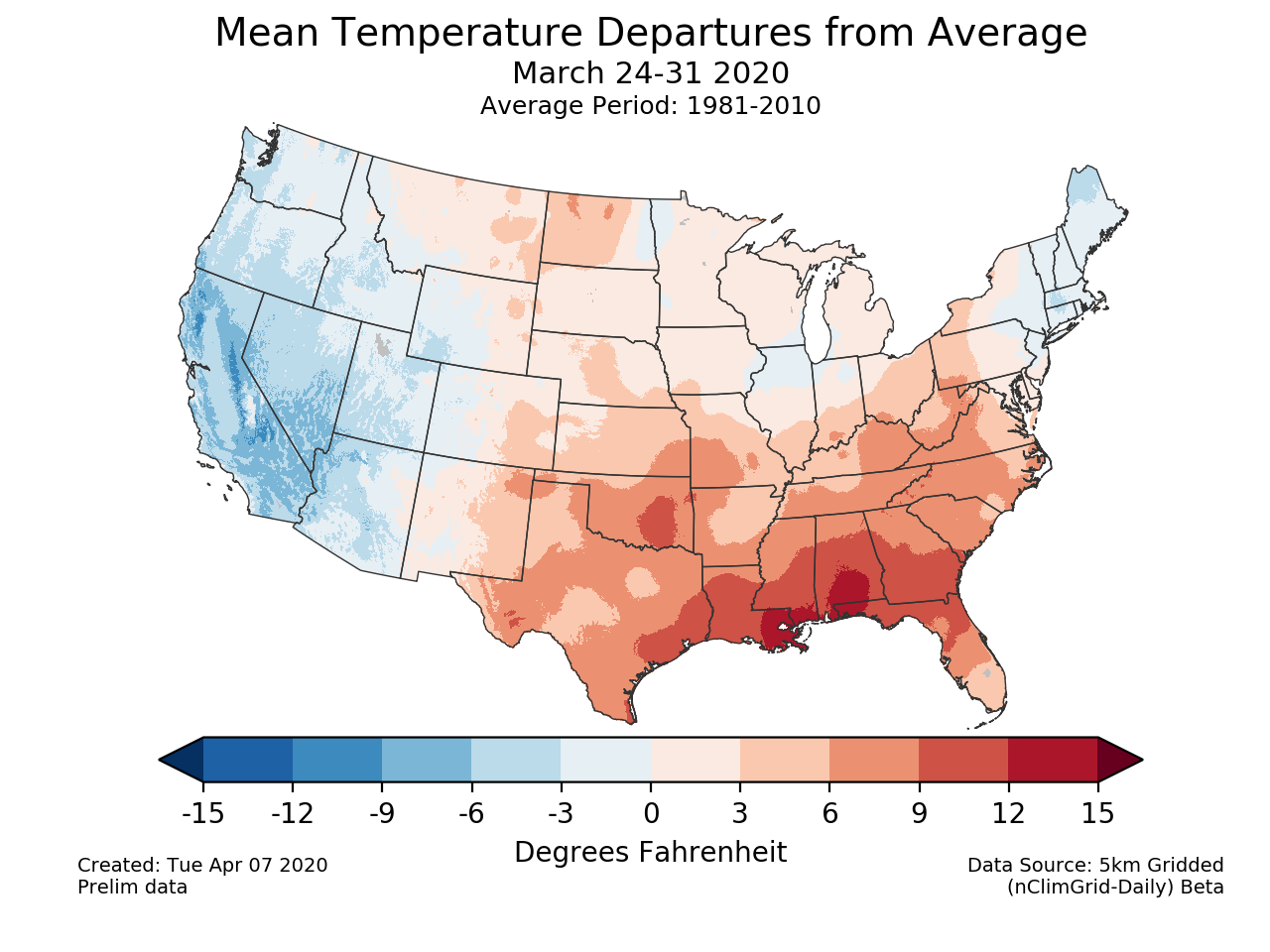 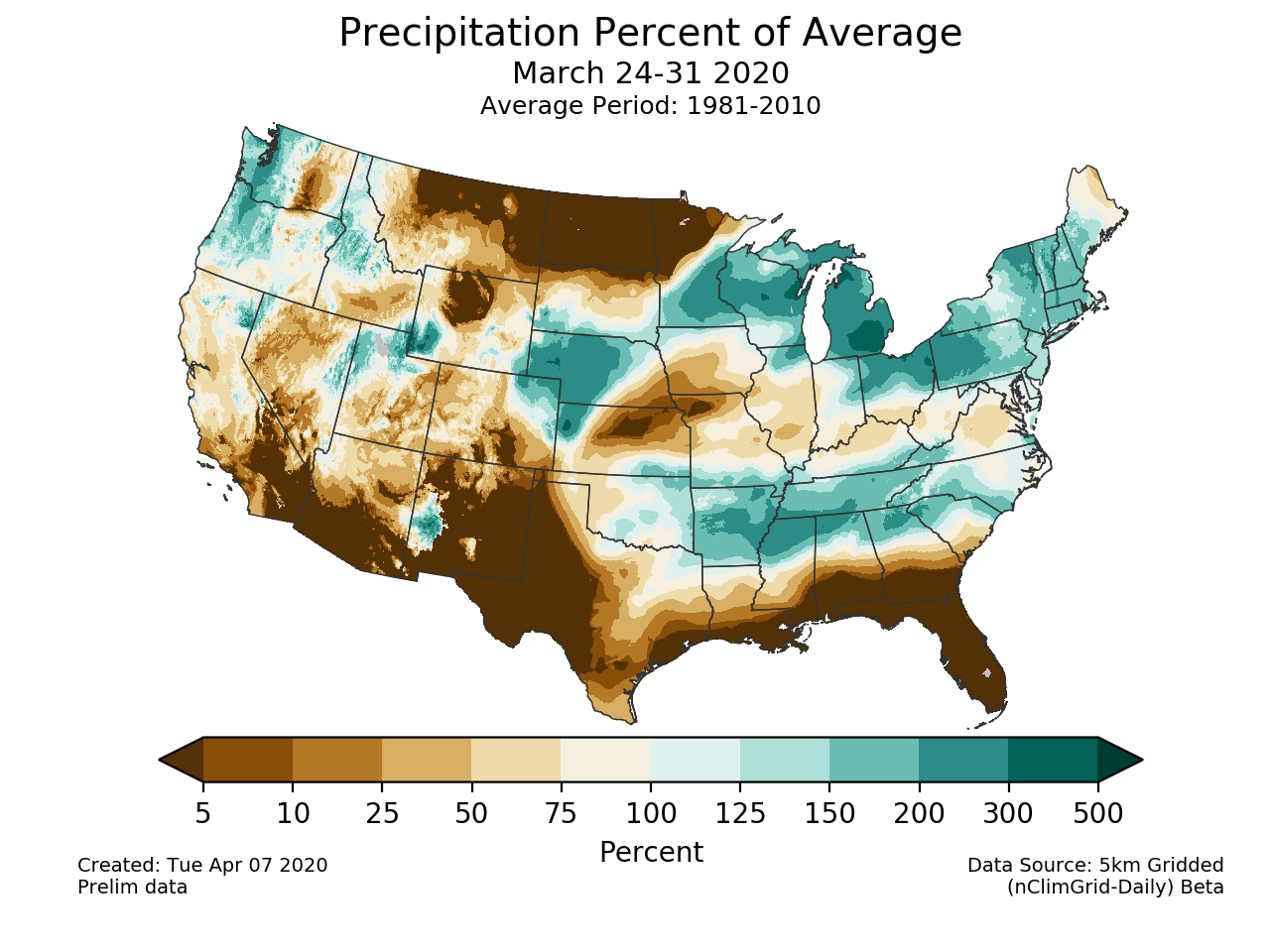 The California trough weakened during the final week of March and the ridge near Alaska moved southwestward. The resulting pattern was a more typical negative PNA. Without the trough off the coast of California, the wet conditions over the Southwest came to an end. However, the remaining larger scale trough continued to bring below-normal temperatures to the western U.S. The ridge in the Southeast continued the hot and dry conditions for the Gulf Coast. 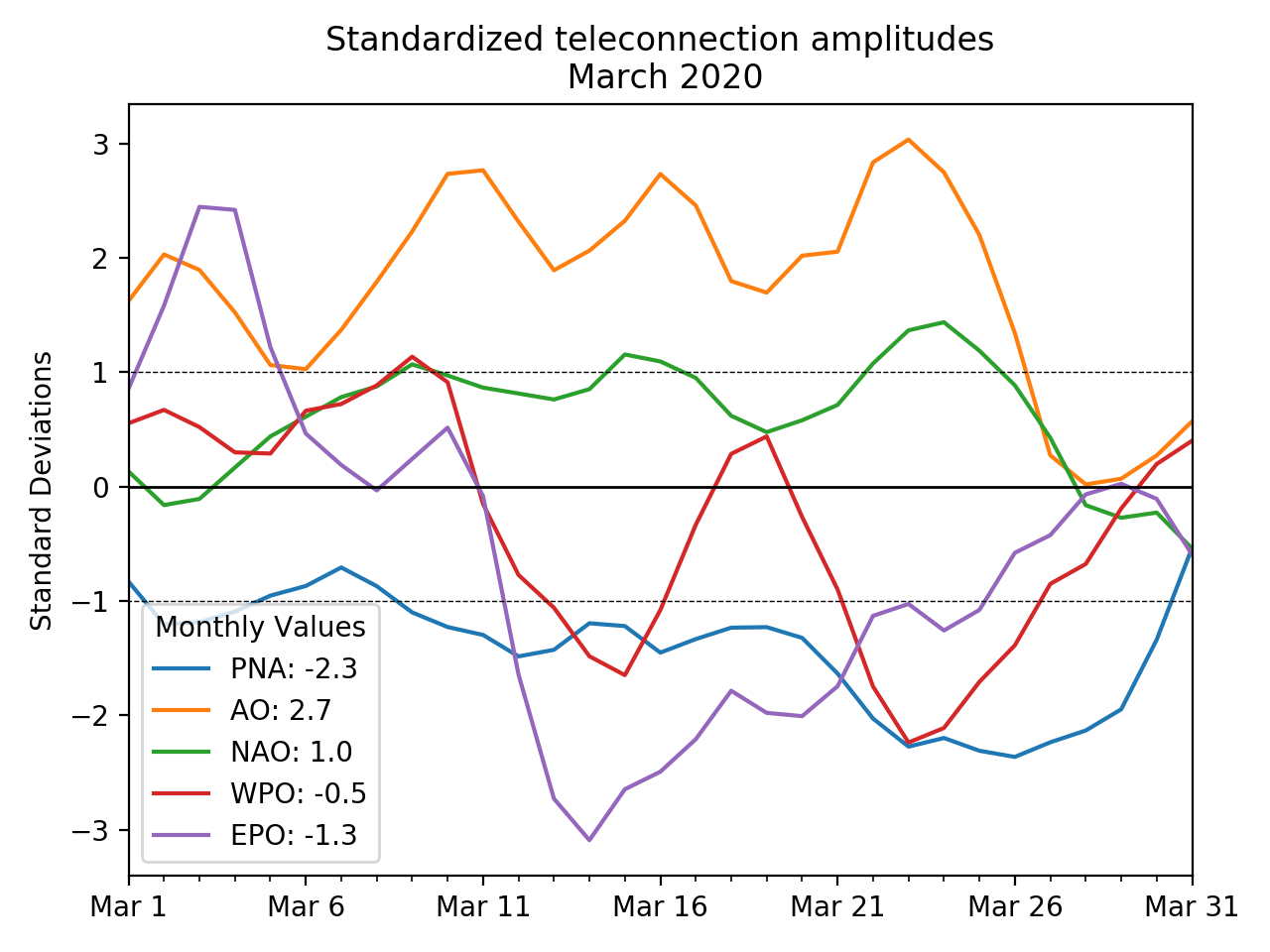