The North American climate continued to be dominated by a ridge along the West Coast in September 2020. This ridge was associated with the positive phase of Pacific/North American pattern (PNA). It was somewhat unusual because La Niña continued to strengthen over the equatorial Pacific, and La Niña favors negative PNA patterns. The ridge persisted the anomalously hot and dry conditions that have remained over the Southwest since mid-April and fueled the fire season there. The ridge shifted eastward towards the end of the month allowing a pair of atmospheric rivers to bring rainfall to the Pacific Northwest. However, the broader ridge inhibited precipitation across the rest of the country, including the Southwest.

The key feature for the Central U.S. was a strong trough associated with a negative East Pacific Oscillation (EPO) around September 8-13. The trough extended from Hudson Bay to the Four Corners and brought very cold anomalies to the Great Plains and eastern Rockies during that period. This 6-day period drove the September mean temperature to be below-average for the Southern Plains. The trough also enhanced precipitation across the Central U.S. where it was generally dry for the remainder of the month.

The main climate driver for the eastern U.S. was a pair of tropical cyclones, Hurricane Sally and Tropical Storm Beta, which made landfall along the Gulf Coast in the latter half of the month. Sally in particular brought torrential rainfall from Alabama through Virginia with the heaviest amounts occurring in the Florida Panhandle. The rainfall from Beta was weaker and mainly fell over Texas and Louisiana. Beta was also notable as it was the ninth storm to make landfall along the contiguous U.S. in 2020, which ties 1916 for the most on record during a single season. 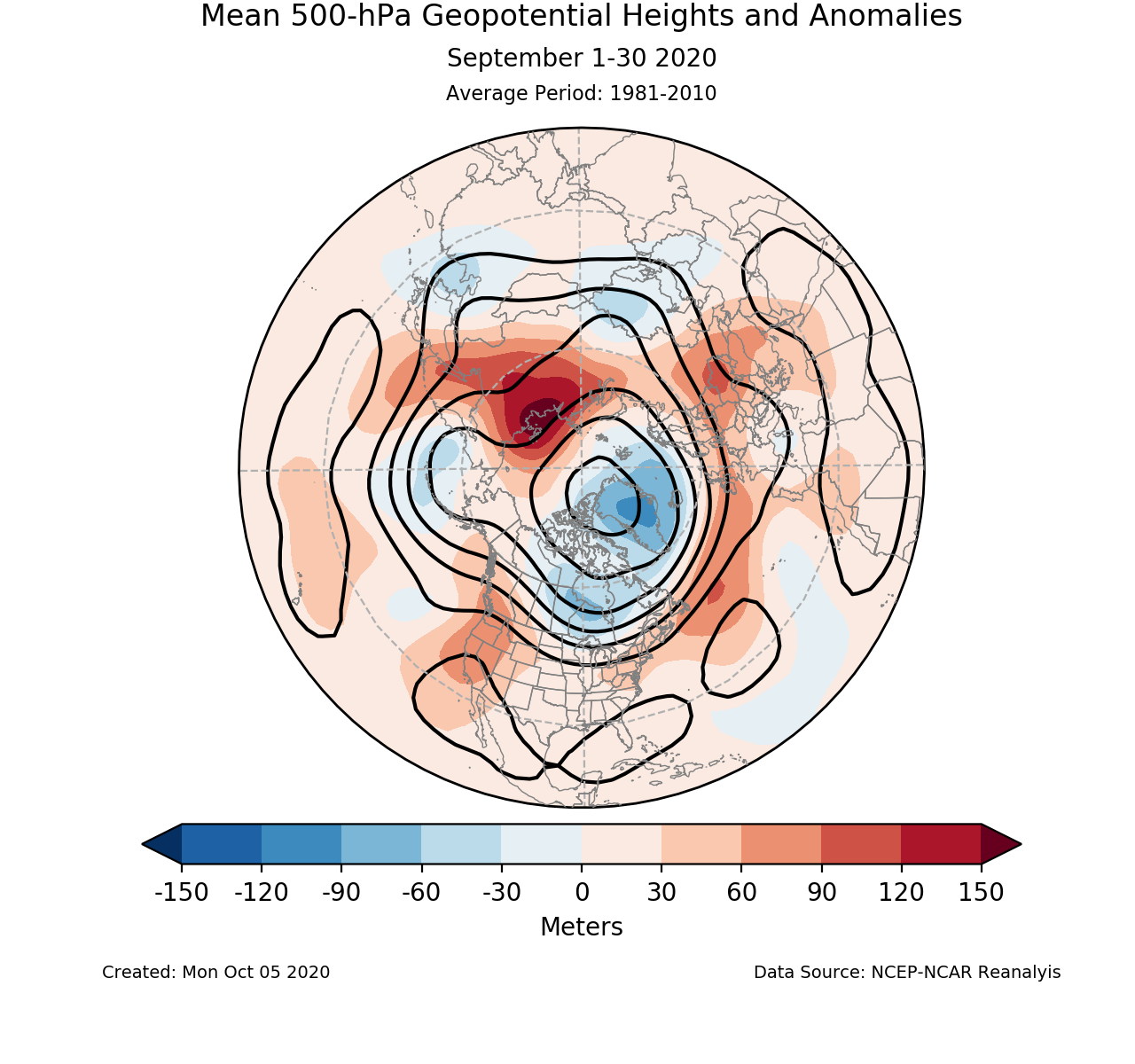 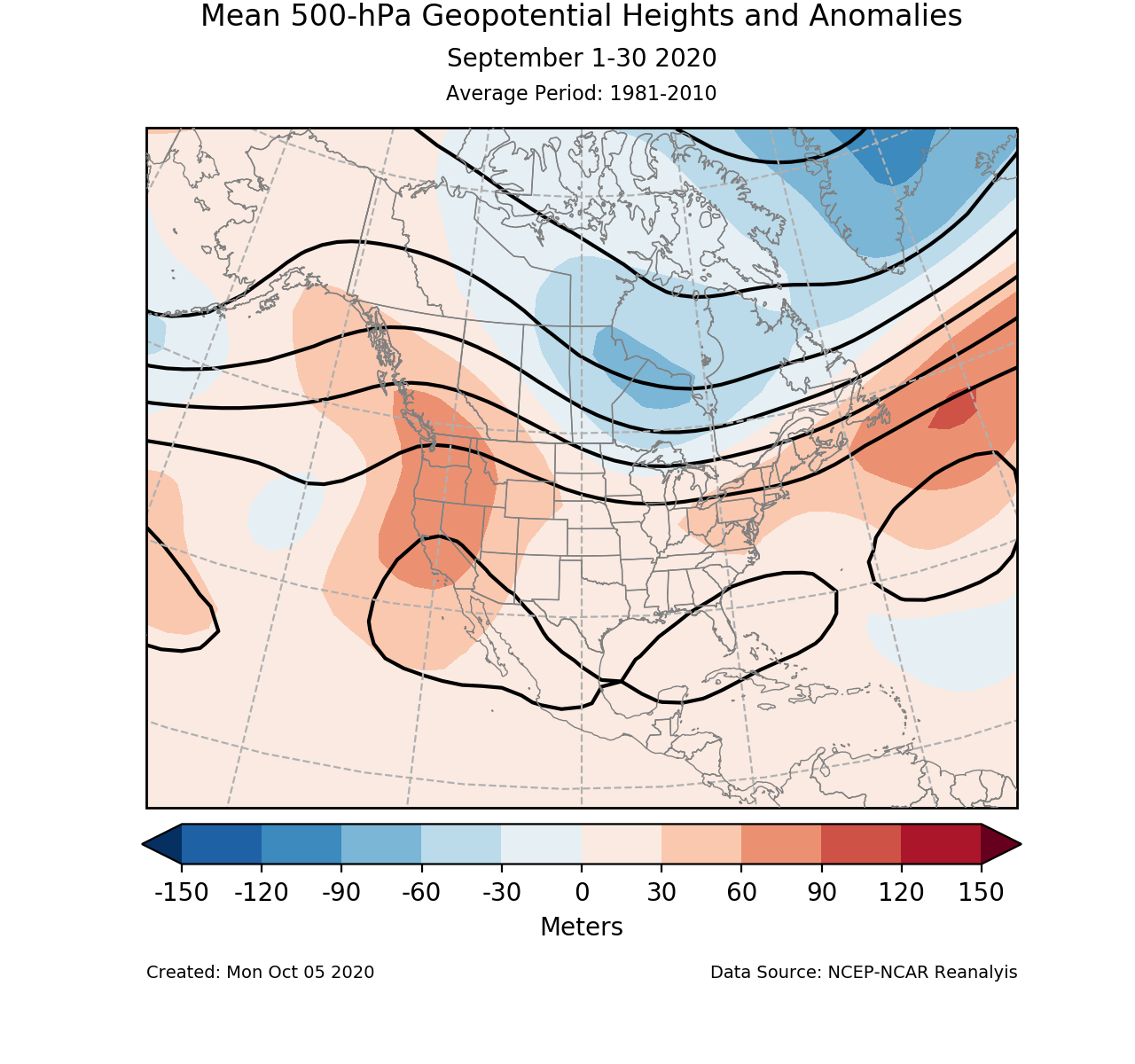 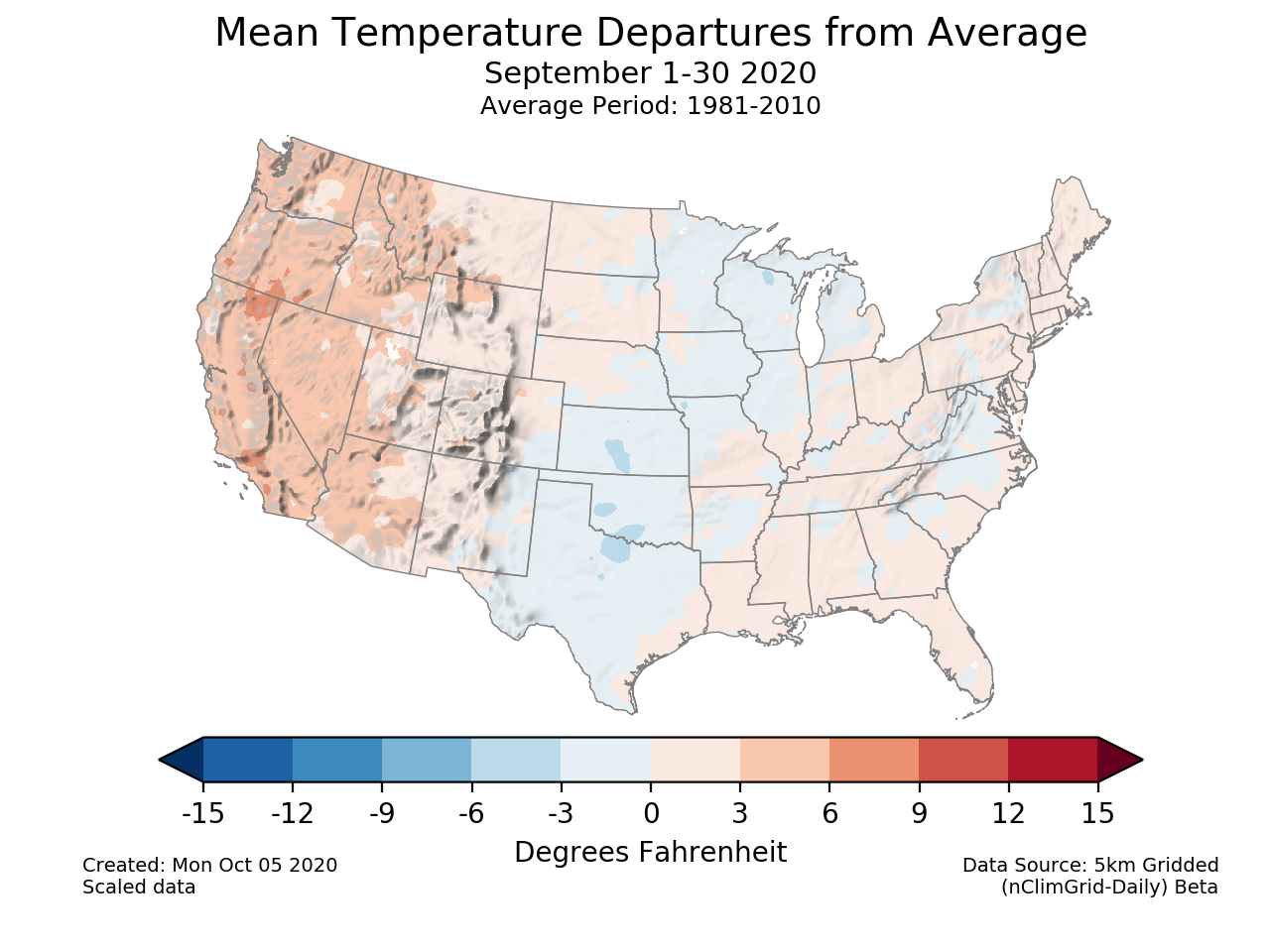 Temperature anomalies (departure from normal) for the CONUS for September 2020 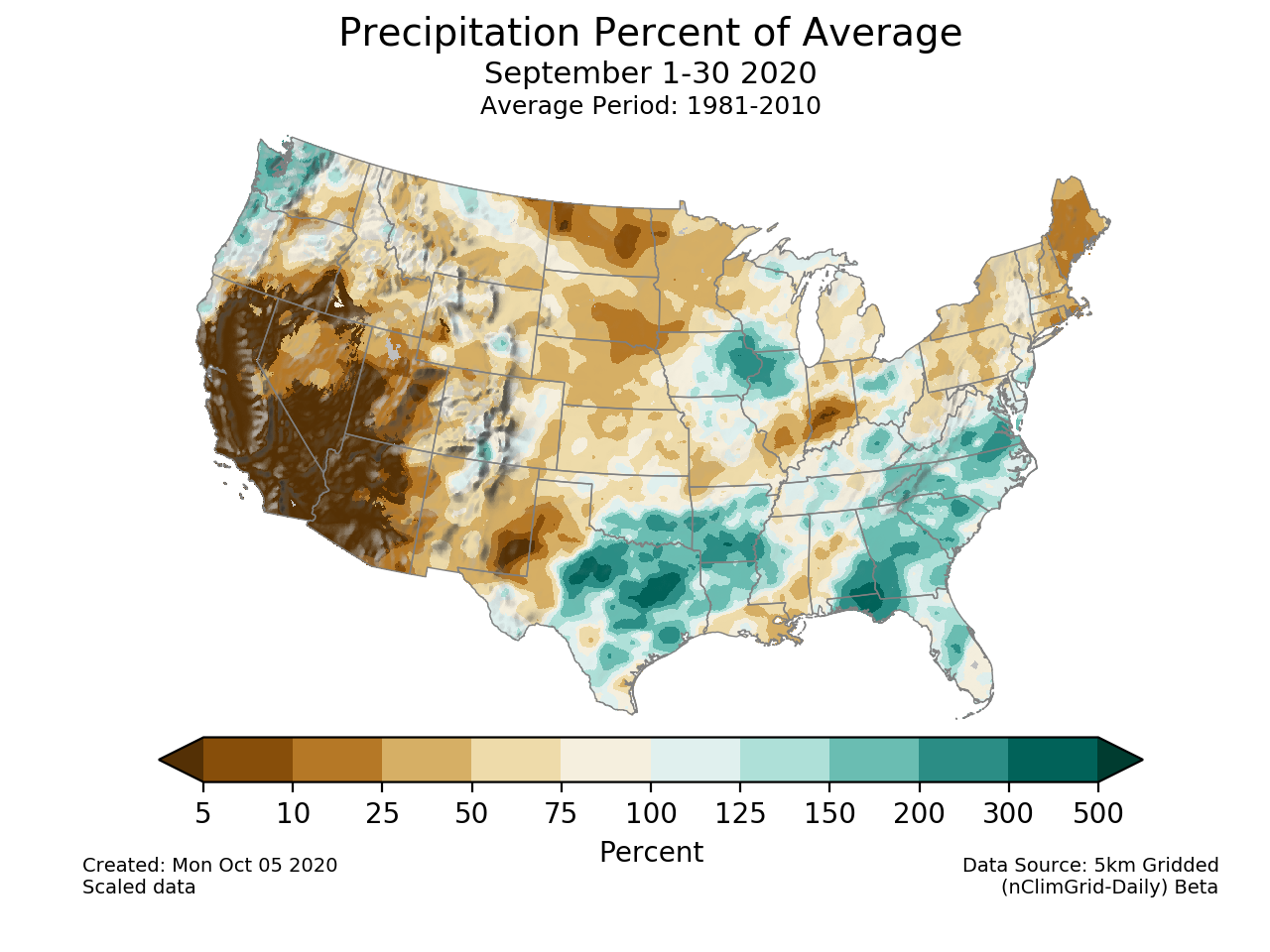 Precipitation anomalies (percent of normal) for the CONUS for September 2020 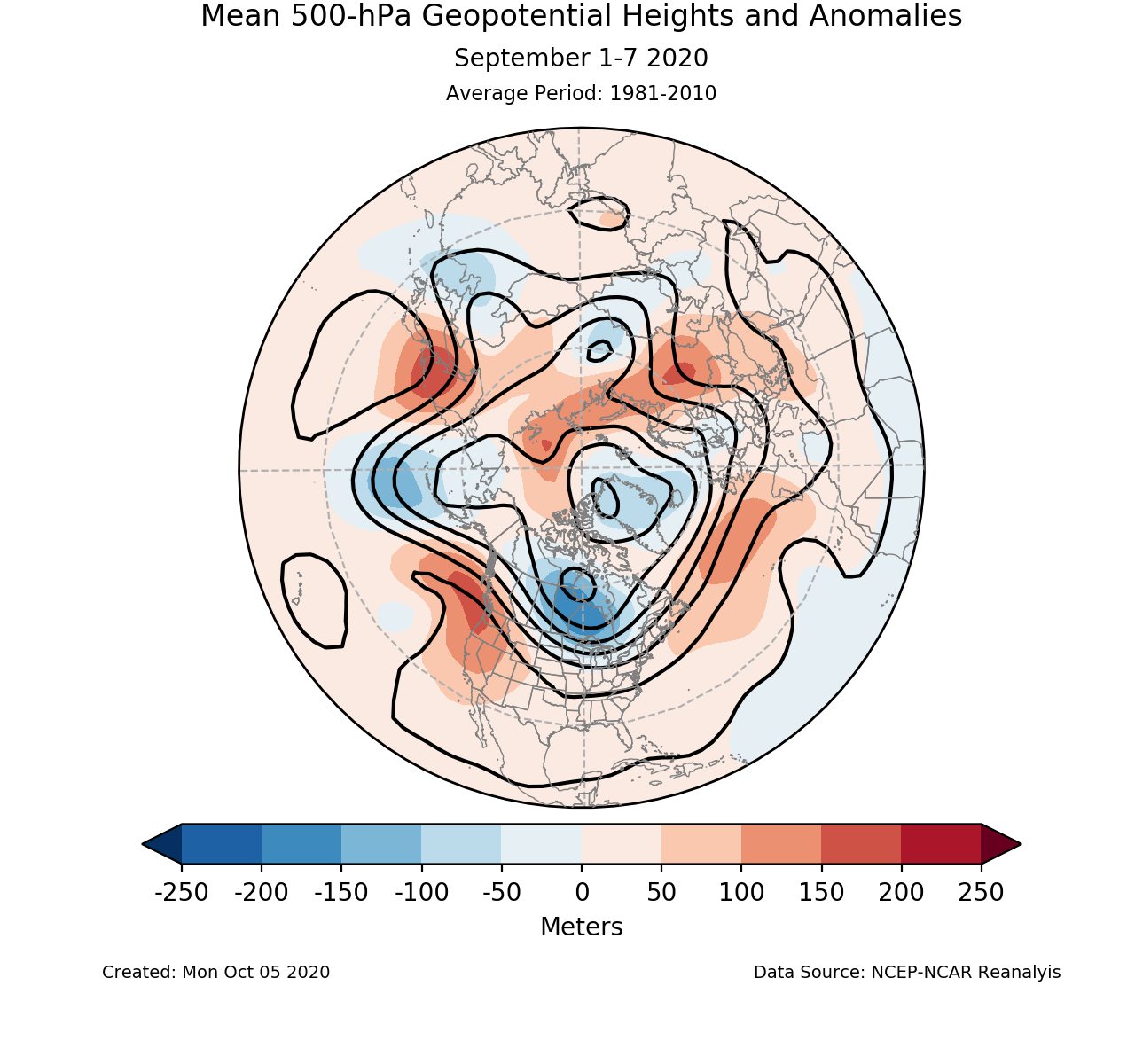 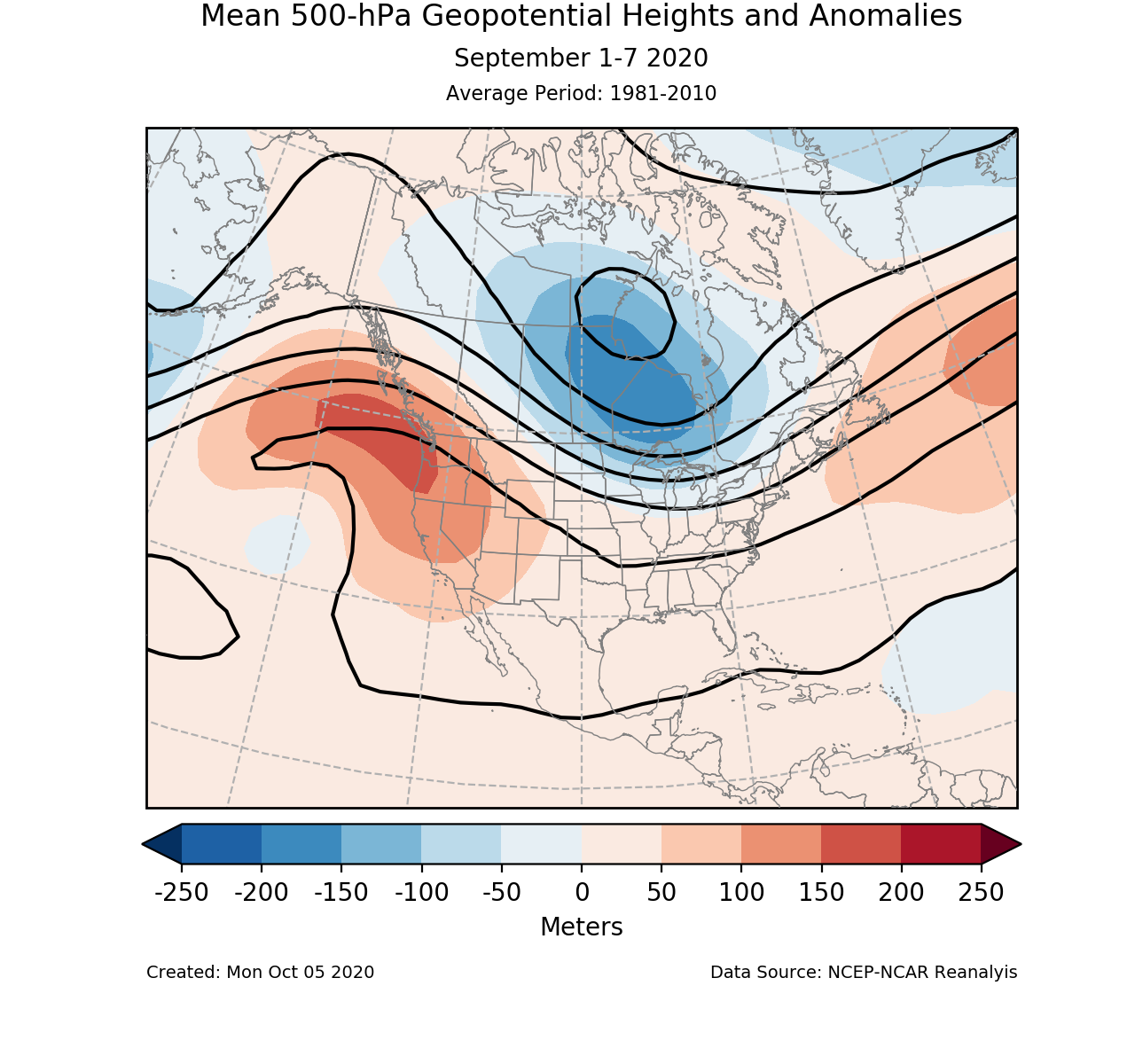 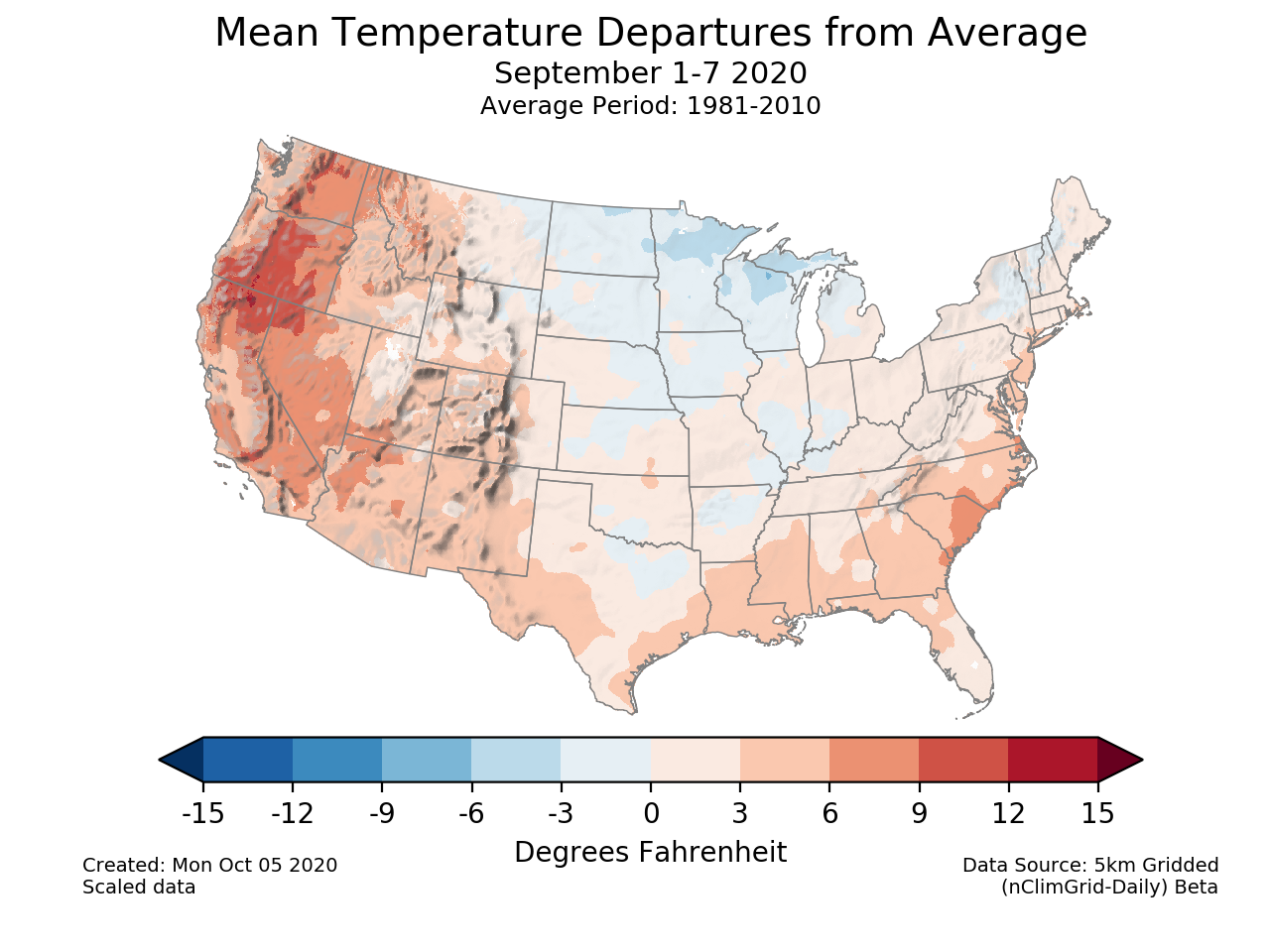 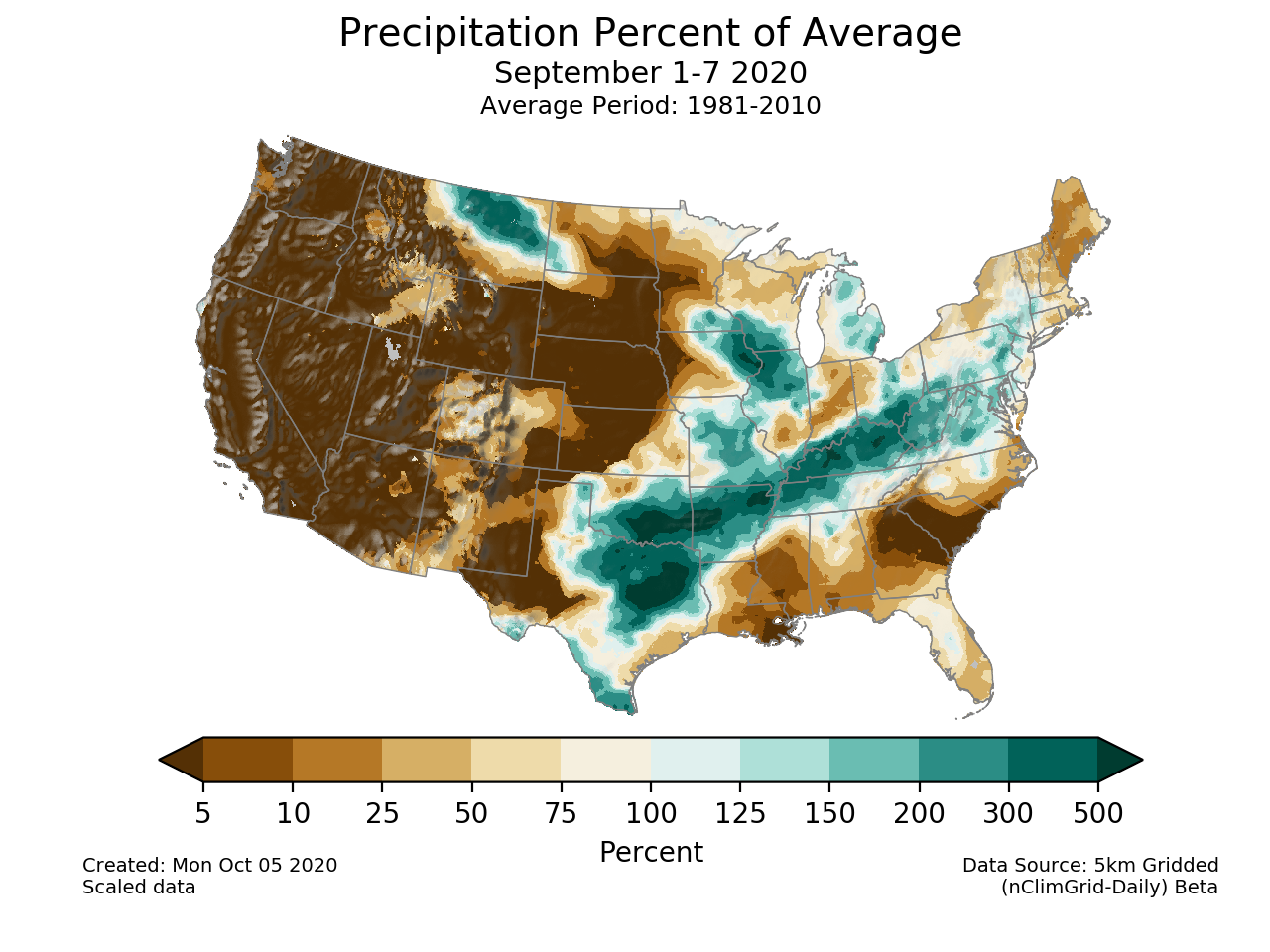 A strongly positive PNA continued from the end of August into the beginning of September. The key feature of this PNA pattern was a ridge along the West Coast. That ridge continued the warm and dry conditions that have been in place  over the Southwest since mid-April. The trough over the Upper Midwest brought cooler than normal conditions to that region, while the associated cold front created a swath of enhanced precipitation from Texas to the Mid-Atlantic. 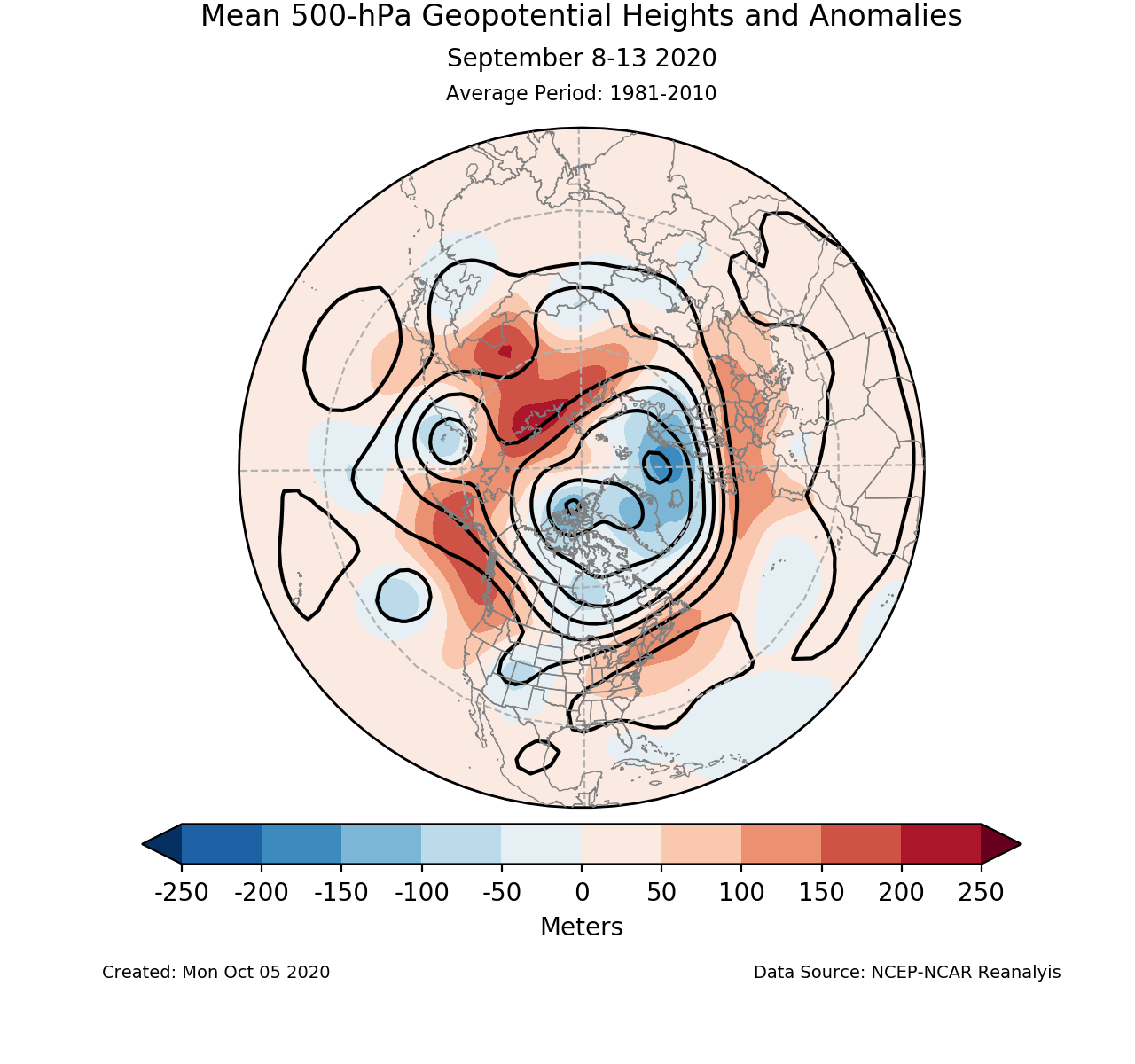 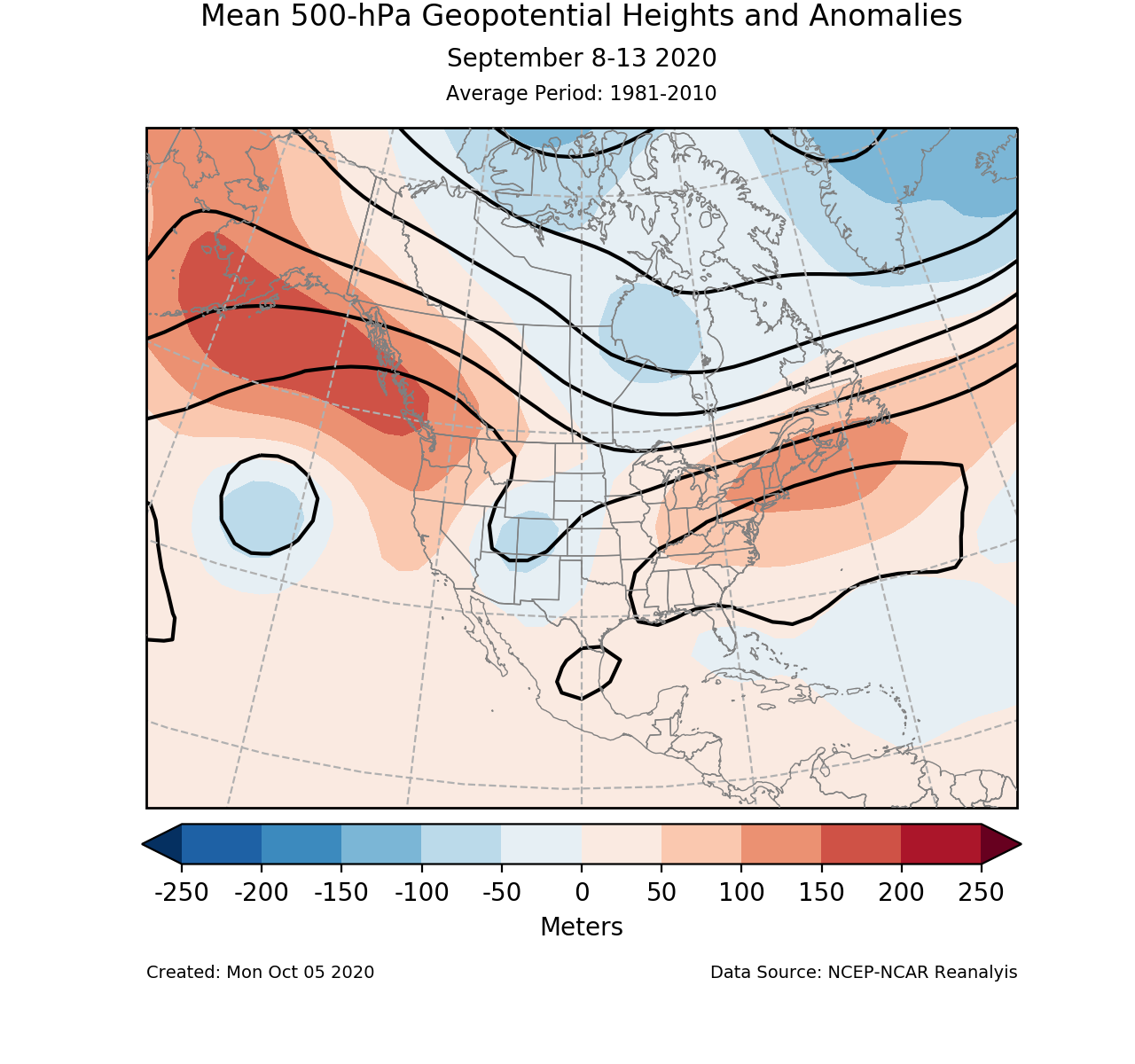 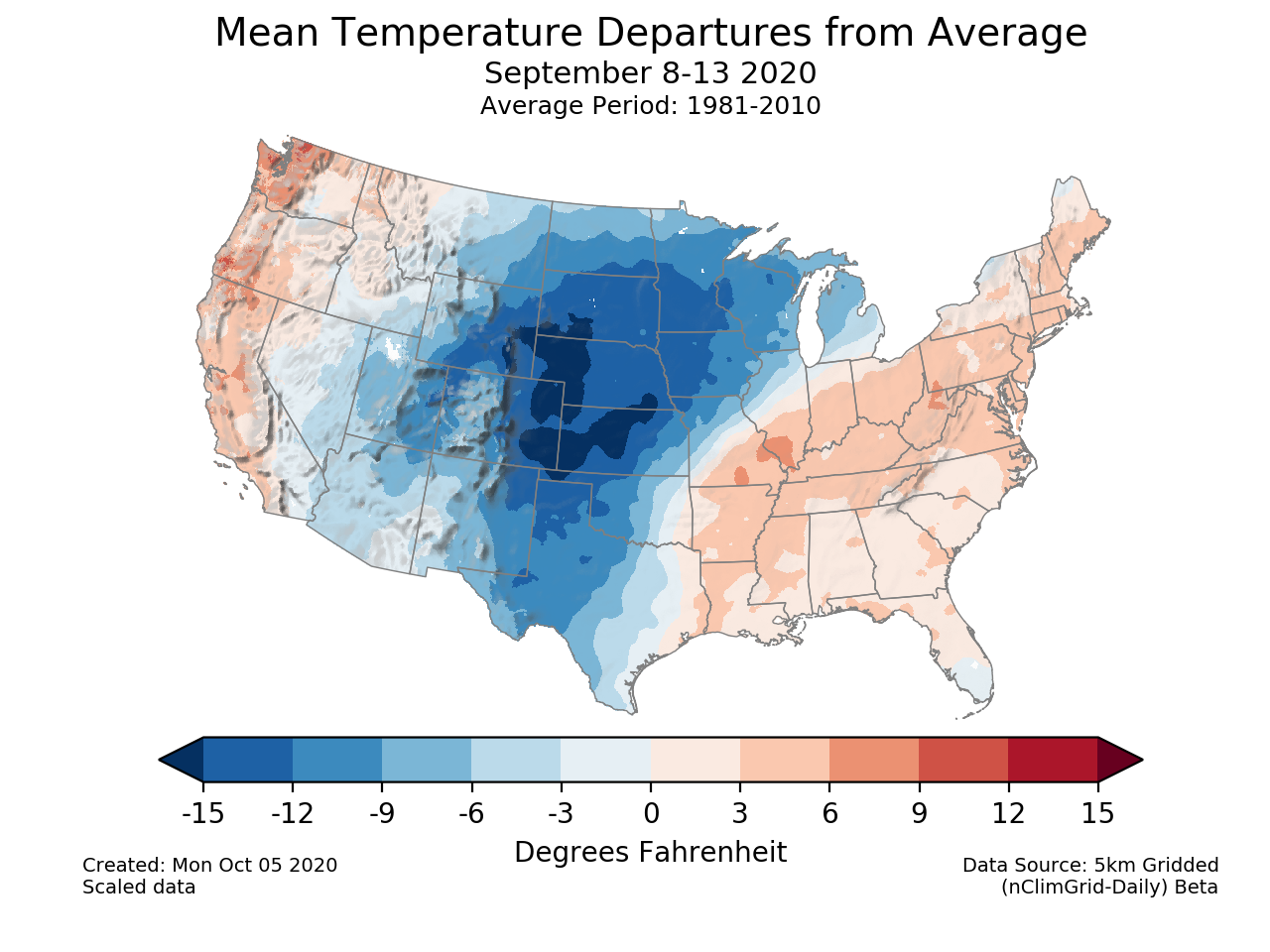 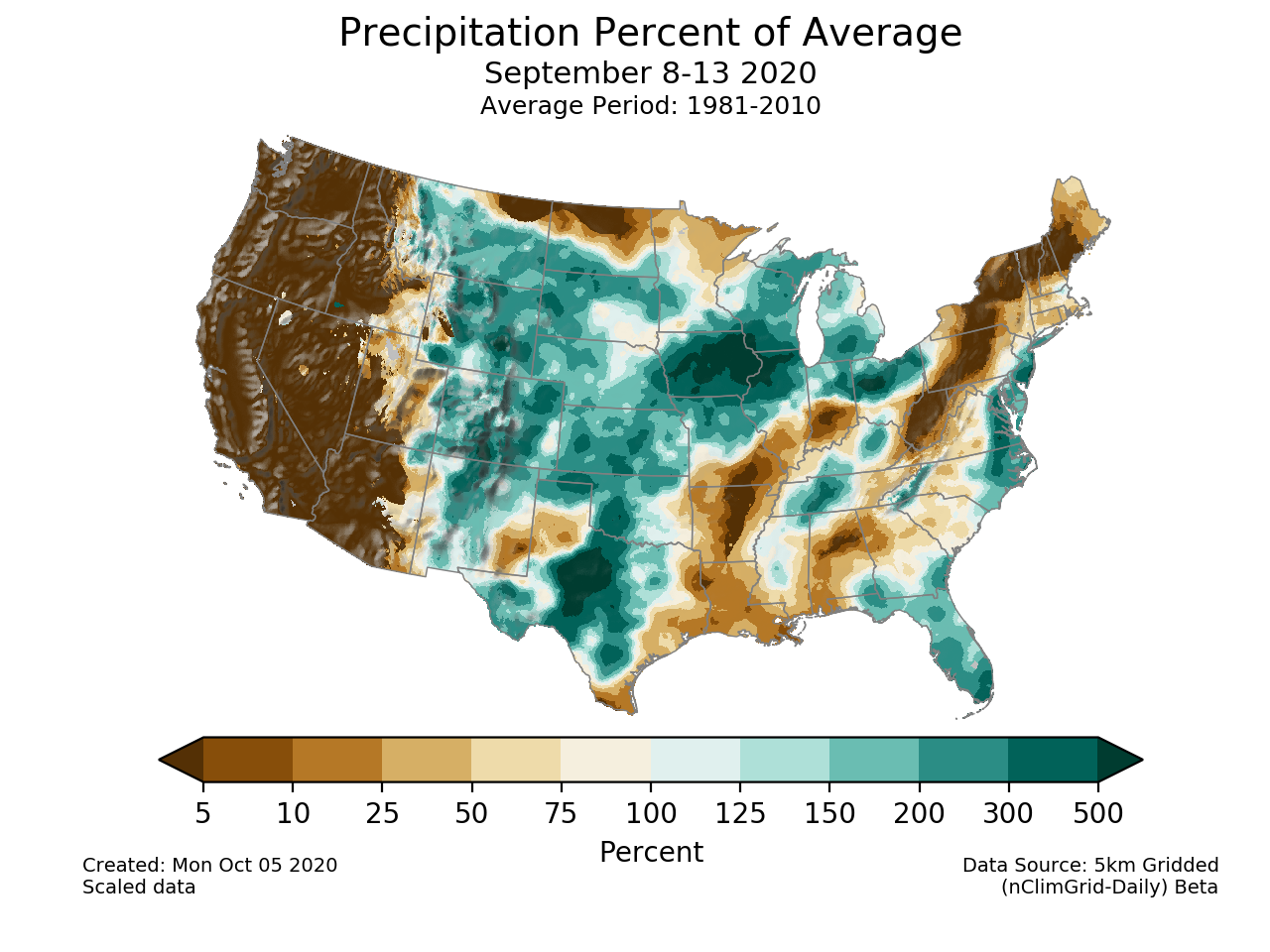 The ridge moved northwestward towards Alaska during the second week of September as part of a strongly negative EPO. As a result, the warm anomalies along the West Coast weakened. The trough from the Midwest dug southwestward towards the Four Corners region bringing much colder than normal temperatures to the Great Plains and the eastern Rockies. Much of the region also saw above normal precipitation with that trough. 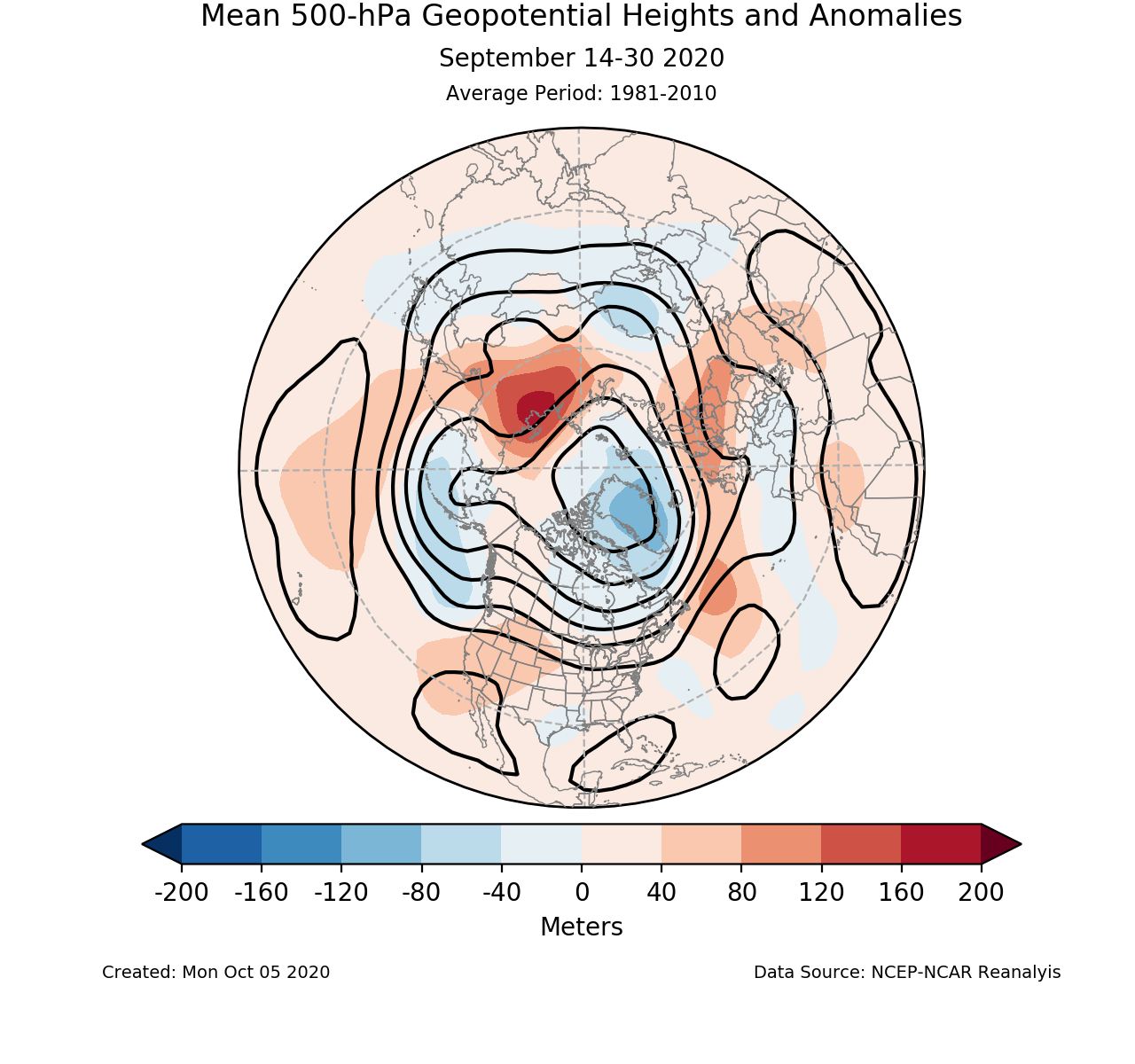 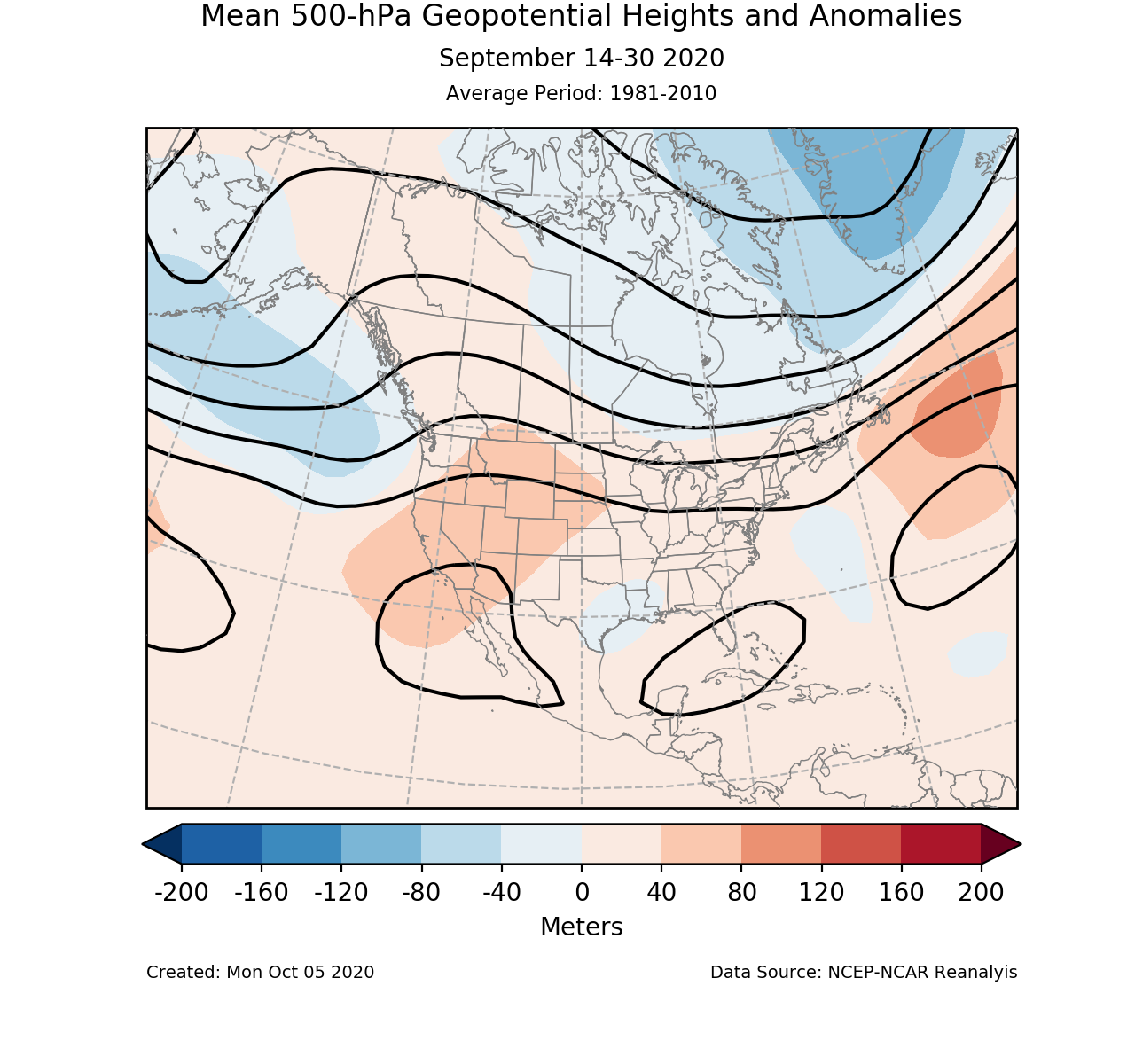 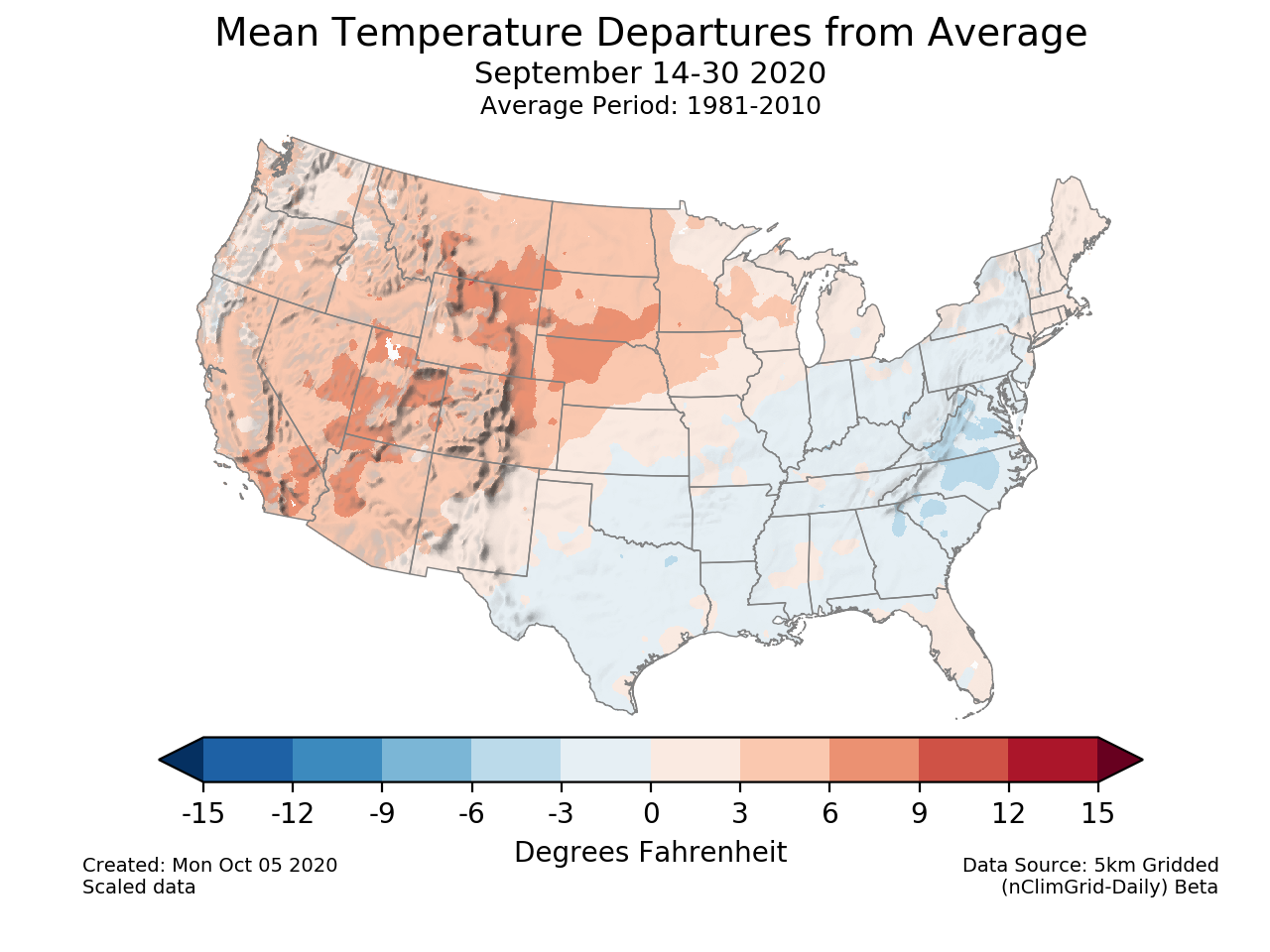 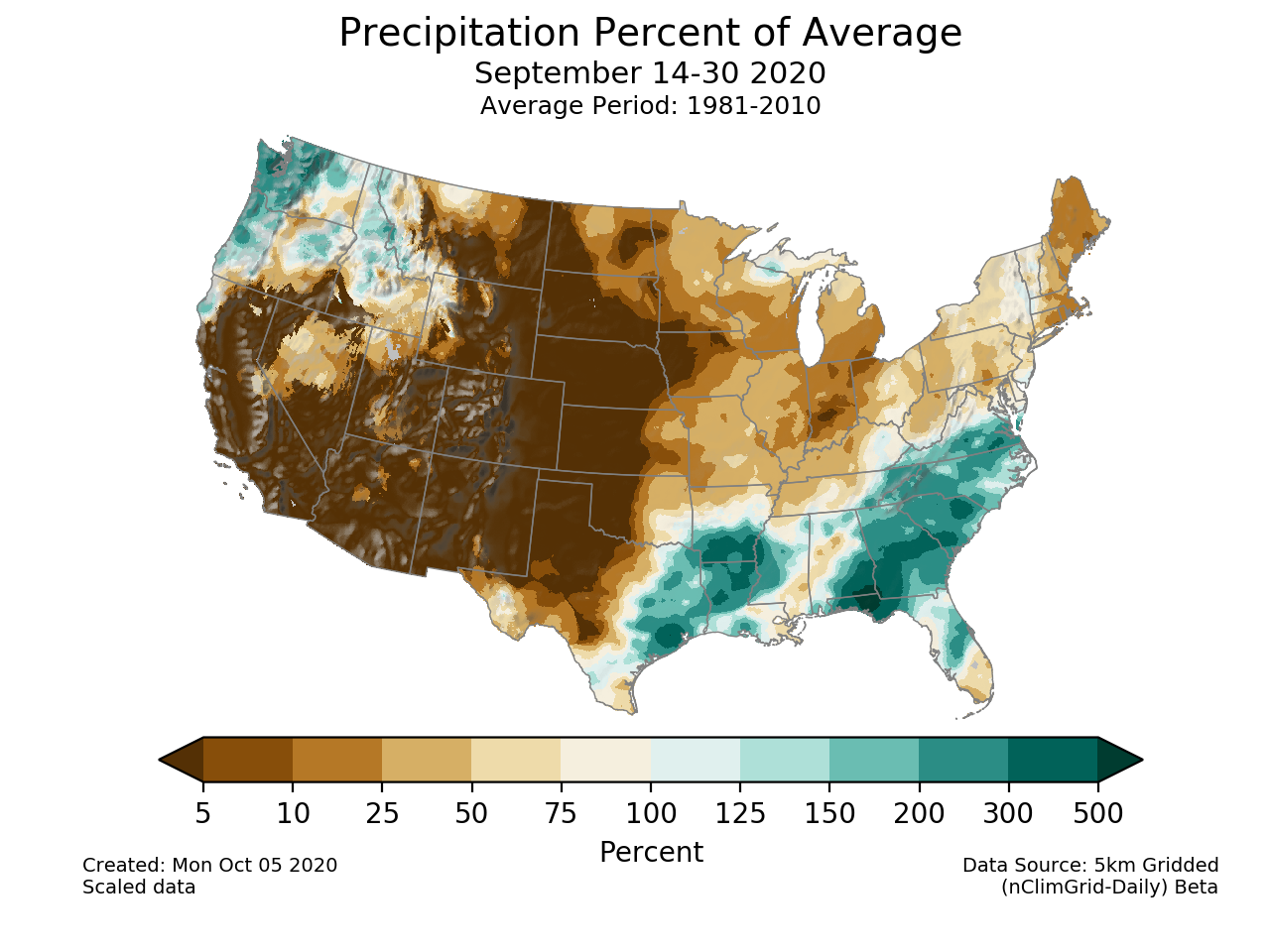 The trough over the Four Corners weakened during the middle of September, and the ridge moved back eastward over the Rockies. This ridge was weaker than the one earlier in the month, so the warm anomalies were not as strong. However, it was broader and the warm temperatures extended into the Northern Plains and the Upper Mississippi. This broad ridge suppressed precipitation across the contiguous U.S. The Pacific Northwest was wetter than normal due to two atmospheric rivers in the final days of the month, and the Southeast received heavy precipitation from Hurricane Sally and Tropical Storm Beta. The rest of the country was drier than normal under the ridge's influence. 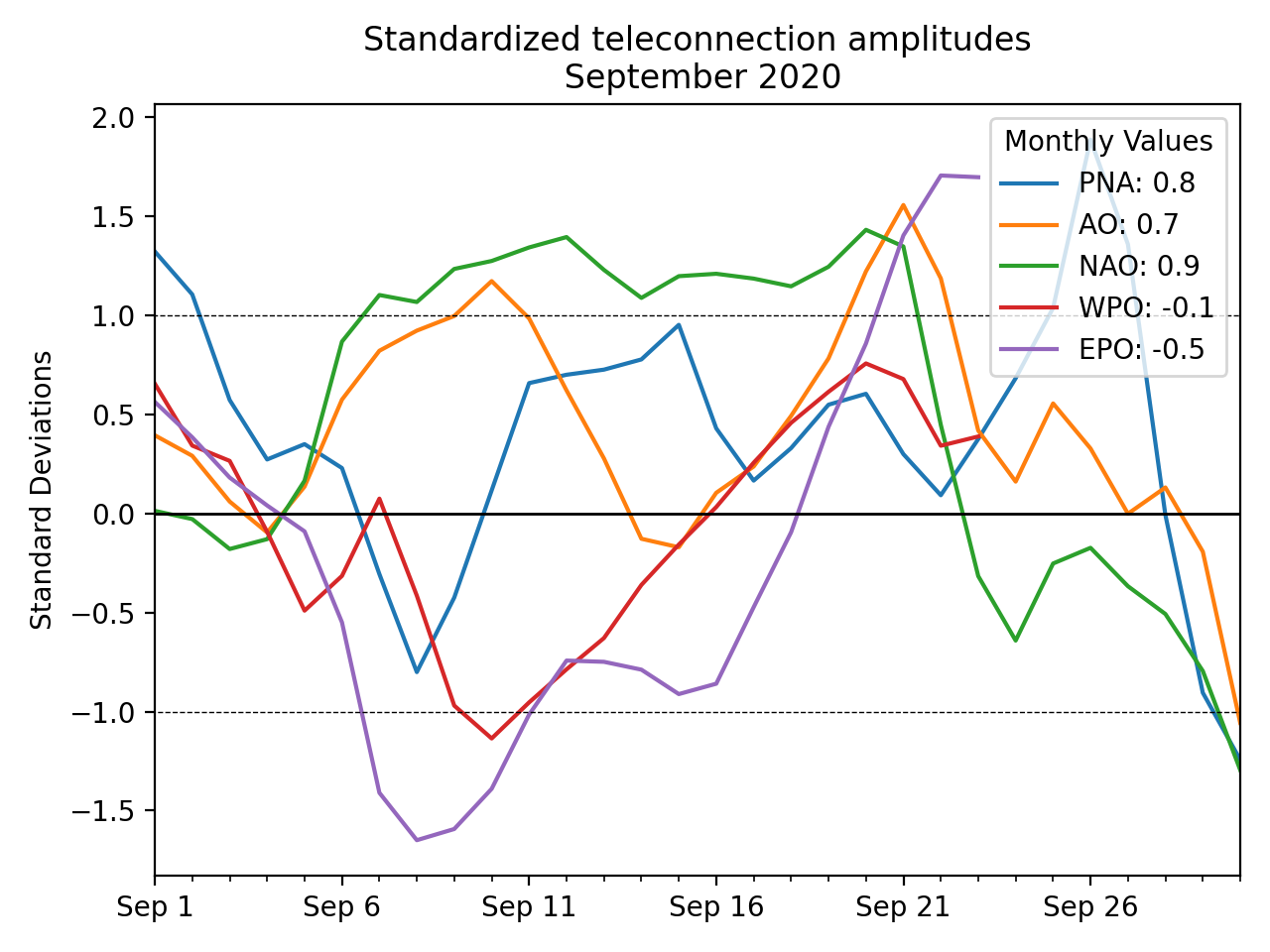 NOAA National Centers for Environmental Information, State of the Climate: Monthly Synoptic Discussion for September 2020, published online October 2020, retrieved on May 20, 2022 from https://www.ncei.noaa.gov/access/monitoring/monthly-report/synoptic/202009.