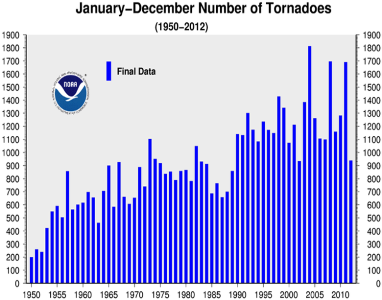 On the heels of one of the most destructive tornado years on record for the country (2011), tornado activity during 2012 was below average. During 2012, there were 878 confirmed tornadoes during January–October, with 58 tornado reports still pending for November and December according to data form the Storm Prediction Center. The 1991-2010 annual tornado average is 1,253 and 2012 marks the slowest tornado year since 2002 when there were 934 tornadoes. If the confirmed tornado count is below 935, depending on the confirmation rate of the end-of-year tornadoes, 2012 could be the slowest tornado year since 1989 which had 856 tornadoes. Despite the slower-than-average year for tornadoes, there were still several large, destructive, and deadly tornado outbreaks during the year. Three tornado outbreaks caused at least one billion dollars in damage and there were 68 tornado-related fatalities.

The last tornado-related fatality in the U.S. occurred on June 24th, so December 31st was the 190th consecutive day without a tornado-related fatality. According to analysis by the Storm Prediction Center, the longest consecutive day stretch with no tornado fatalities in the 1950-present official record was 197 days between August 15th 1986 and February 28th 1987. Longer periods without tornado fatalities have occurred prior to 1950, but inconsistent observing practices make comparisons to current data difficult.

The 2012 tornado year started off above average, with above-average tornado activity for each month between January and April. The lack of storm systems during the late spring and summer across the Great Plains was associated with a lack of tornadoes. May and June, which are typically the most active months of the year, both had less than 50 percent of average number of tornadoes confirmed. The below-average tornado activity continued through November. The most active regions of the country during 2012 were the Central Plains, the Gulf Coast, and the Ohio Valley. An active storm pattern during December along the Gulf Coast caused the monthly tornado count to be above average, according to preliminary data. The tornadoes that did form during 2012 tended to be weak to moderate strength in nature. There were only four EF-4 tornadoes, the least since 2009, with no confirmed EF-5 tornadoes during the year. 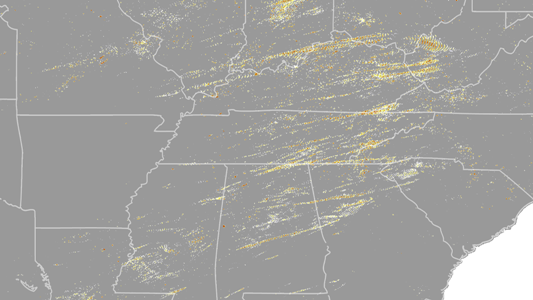 An early-season tornado outbreak hit the Ohio Valley and Southeast on March 2nd and 3rd. Seventy-five tornadoes were confirmed in 12 states from Illinois to Florida. It was early in the tornado-season for an outbreak of this magnitude and was one of the largest tornado outbreaks on record during March. The tornado outbreak was spawned as a large low-pressure system moved through the mid-Mississippi River Valley into the Ohio Valley. Ahead of the associated cold front, temperatures surged into the 70s and 80s (degrees F), which is more than 20 °F above average. This was the deadliest tornado outbreak during 2012 with 40 fatalities. The 11 deaths associated with the EF-4 tornado which moved through four counties in southern Indiana was the deadliest single tornado of 2012. An EF-3 tornado in eastern Kentucky and western West Virginia was on the ground for 85 miles and caused 10 fatalities, marking the longest tracked tornado of the year. Damage from the event was expected to exceed one billion U.S. dollars. 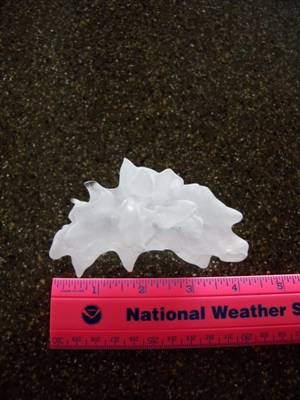 On March 9th, a cut-off low pressure system impacted the Hawaiian Islands, bringing heavy rainfall and severe thunderstorms to the windward portions of the archipelago. A waterspout (a tornado over water) made landfall on Oahu hitting the towns of Lanikai and Kailua. The tornado caused some minor damage and was rated an EF-0. Tornadoes are rare in Hawaii, with only seven confirmed tornadoes impacting the state since 1950. The same system produced a severe thunderstorm which dropped a hailstone on Oahu measuring 4.25 inches long, 2.25 inches tall, and 2 inches wide, breaking the record for largest hail stone measured in Hawaii. The previous state record hailstone was 1 inch in diameter.

On March 15th, an amplified weather pattern, more typical of summer, allowed warm and moist conditions to surge northward into Michigan. An upper-level low pressure system moving into the unstable environment set off several thunderstorms across the region. One of the tornadoes, near Dexter, Michigan, was rated an EF-3 with winds of 135-140 mph. The tornado marked the earliest EF-3 to impact the state in the 1950-present modern record. The tornado had a 7.2 mile path length, with a maximum width of 800 yards, destroying nearly 130 buildings in its path. There were no reported fatalities or injuries with the storm. 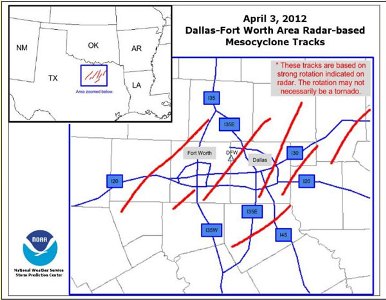 On April 3rd, a series of supercell thunderstorms moved through the Dallas-Fort Worth Metroplex, spawning 22 tornadoes in the densely populated area. Most of the tornadoes were weak and rated EF-0 and EF-1, while three were rated EF-2 and two were rated EF-3. The Dallas-Fort Worth International Airport, one of the busiest in the nation, halted all flights and sheltered all passengers as a precaution due to the tornado warnings. The tornadoes caused significant damage across Dallas-Fort Worth, but they did miss the airport and there were no reported fatalities for the entire outbreak. Damage from the event was expected to exceed one billion U.S. dollars. 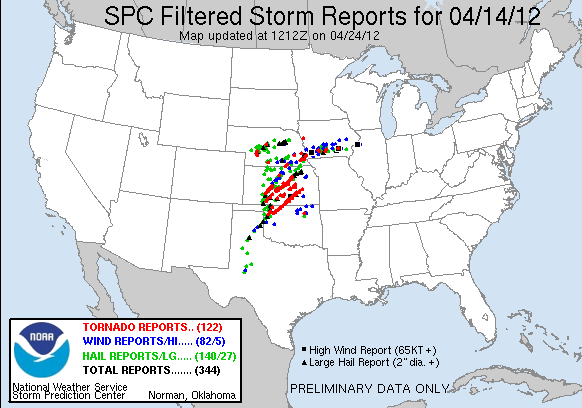 A tornado outbreak on April 14th and 15th spawned 98 tornadoes across the Central Plains and Southern Plains, causing 6 fatalities. This outbreak was the largest during 2012 and helped push the monthly U.S. tornado count to 206. The monthly tornado count was higher than both May and June, the two typically most active tornado months of the year. This was only the third time since 1980 this has occurred. The tornadoes were spawned as a vigorous storm system moved through the region. An EF-3 tornado moved through the town of Woodward, Oklahoma causing the six fatalities. Damage from the event was expected to exceed one billion U.S. dollars.