During October, six tropical systems formed in the Atlantic, setting a new record for the most named storms in any season in the Atlantic (23). The six storms were Hurricane Stan in the southwestern Gulf of Mexico, which made landfall in Mexico; Tropical Storm Tammy that made landfall in the southeastern U.S.; Hurricane Vince which developed southwest of Portugal in the far eastern Atlantic in a region of the sub-tropics where the occurrence of tropical cyclones is extremely rare; Hurricane Wilma, which became the most intense storm on record based on measurements of central pressure; and Tropical Storm Alpha and Hurricane Beta. There is a preliminary summary of the 2005 hurricane season in the section above.

Track of Hurricane Stan
Image courtesy of Univ. of Wisconsin/CIMMS

Hurricane Stan became a tropical storm just before making landfall on the Yucatan Peninsula on October 2nd. Weakening over land, Stan sooned regained tropical storm strength in the Bay of Campeche and continued to strengthen until reaching hurricane intensity on October 4th. With peak sustained winds of 80 mph (kts) (category 1 status), Stan made landfall about 90 miles east-southeast of Veracruz and dissipated the next day over the Mexican mountains. Torrential rains caused flooding and mud slides over portions of Mexico and Central America around the time of Stan's existence and led to hundreds of deaths. However, it is impossible to relate the rainfall directly to Hurricane Stan.

Tropical Storm Tammy developed off the east coast of central Florida on October 5th and moved parallel to the coast, turning northeastward to make landfall in northeastern Florida near Mayport. Maximum sustained winds were 50 mph and although significant damage was not sustained from winds, some localized flooding was reported from rainfall of 3-5 inches. Tammy moved westward over Georgia and Alabama before becoming absorbed by a larger extratropical low pressure system on the 6th. 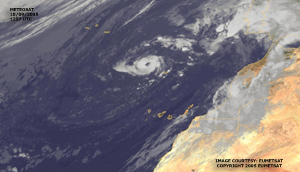 Vince was a notable storm due to its unusual track. Vince became a tropical storm on October 9th in the eastern Atlantic about 515 miles south-southeast of the Azores. Moving slowly northeastward, it became a hurricane later that day to the northwest of the Madeira Islands. Accelerating to the east-northeast, Vince weakened back to a tropical storm on the 10th and made landfall the next day in the southwestern most area of Spain (near Huelva) as a tropical depression. Vince is the first known tropical cyclone to make landfall in Spain.

There is a special Hurricane Wilma report outlining the development and impacts of this historic storm. It became the most intense hurricane on record for the Atlantic Basin based on a central pressure of 882mb (second only to Hurricane Gilbert of 1988, at 888mb).

For the first time since the naming convention began, activity exceeded the 21 available letters to name storms, invoking the need for the Greek alphabet for the 22nd and 23rd storms of the season.

Tropical Storm Alpha developed south of Puerto Rico on the 22nd and moved northwestward to make landfall in the Dominican Republic with 50 mph winds. Heavy rain led to 20 deaths in Hispaniola as Alpha weakened over the high terrain, re-emerging over the Atlantic on the 23rd. Alpha weakened to a trough as it was affected by the much larger circulation of Hurricane Wilma approaching Florida from the west. 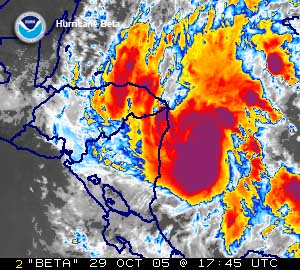 A tropical depression off the coast of Costa-Rica/Nicaragua developed into Tropical Storm Beta on the 27th. Strengthening to reach hurricane intensity on the 29th as it moved northward, Beta then turned to the west and west-southwest and became a category 3 storm on the 30th, the 7th major hurricane of the season. Beta weakened slightly later that day and came ashore on the central east coast of Nicaragua as a category 2 storm.