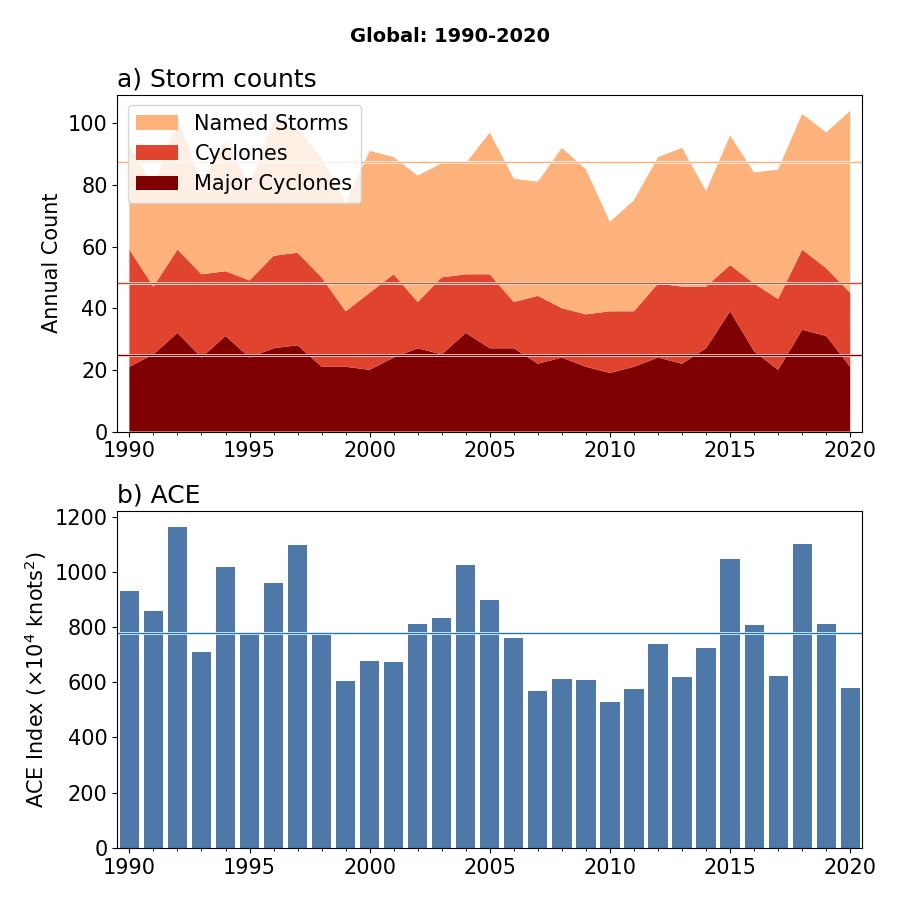 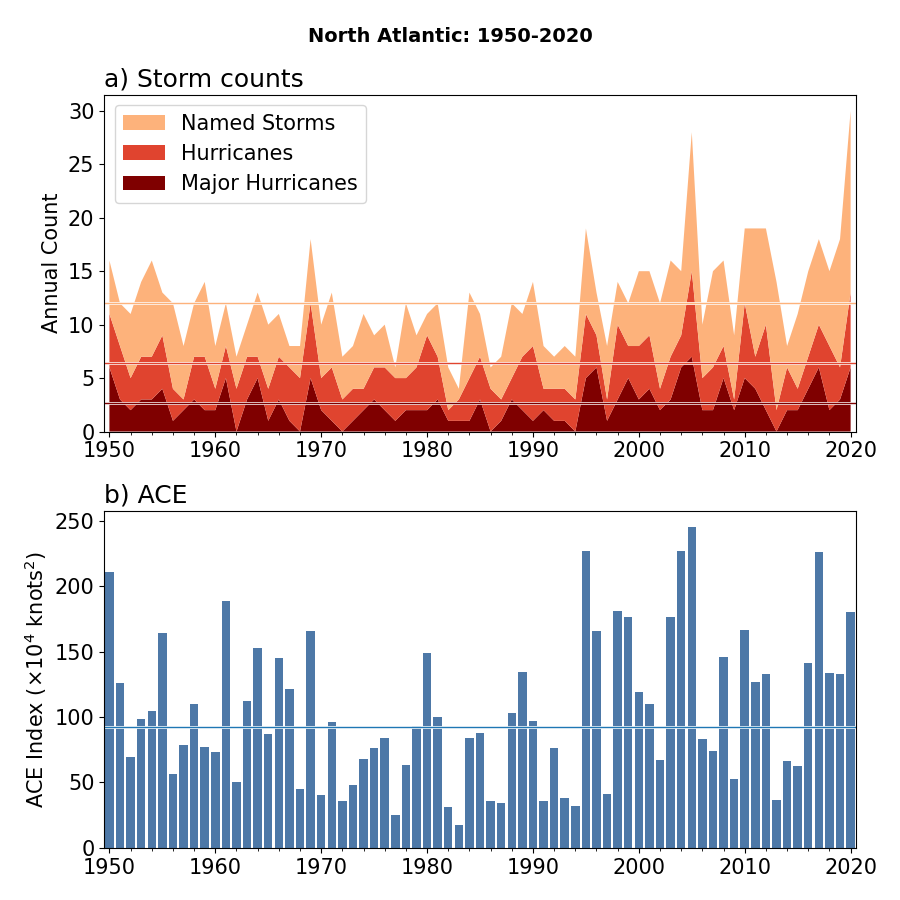 A total of 103 named storms occurred during 2020 around the globe. This count includes Tropical Cyclone Calvinia, which formed in late December 2019 and continued through January 1. The count ties the record that was set in 2018. Despite the record number of named storms, the 45 hurricane-strength and 21 major hurricane-strength tropical cyclones were both near their 1981-2010 mean values. The accumulated cyclone energy (ACE), which measures the strength and duration of tropical storms and hurricanes, was 25% below normal and the fifth lowest since 1981.

The North Atlantic played an unusually large role in the global tropical cyclone activity in 2020. The North Atlantic had 30 named storms, which broke the previous record of 28 in 2005. Of those 30 storms, 13 were hurricanes, six of which were major hurricanes. Both of these totals are the second highest on record behind 2005. The ACE was 75% above normal. The ACE was the sixth highest since 1981, and 2020 marked the fifth consecutive year with above-normal ACE. The North Atlantic accounted for about 30% of the global ACE and named storms, which is more than twice its usual share.

The 2020 season was also particularly impactful for the U.S. Twelve named storms made landfall in the contiguous U.S., which breaks the previous record of nine from 1916. Six of the landfalling storms in 2020 were hurricanes, which ties 1886 and 1985 for the highest on record. Seven of the twelve U.S. landfalling named storms caused at least $1 billion, which broke the previous record of four billion-dollar tropical cyclones in both 2004 and 2005. The strongest of these U.S. landfalling storms was Hurricane Laura, which made landfall in Louisiana as a category-4 storm. Laura was just the third of five named storms to make landfall in Louisiana in 2020, the most on record for any state in one year.

The strongest storm of the 2020 North Atlantic season was Hurricane Iota, which was also the second-strongest November hurricane on record for the Atlantic. Iota carved a path of destruction through Central America that closely followed that of category-4 Hurricane Eta from just two weeks earlier.

Despite the record activity in the North Atlantic, most other basins were less active than normal in 2020. The East Pacific had 16 named storms, which was near normal. However, the four East Pacific hurricanes in 2020 were the third fewest since 1981. The East Pacific ACE was more than 40% below normal, and it was the eighth lowest value since 1981. The West Pacific was also unusually quiet with less than half its normal ACE (third lowest since 1981). The West Pacific did have the strongest storm of 2020, Super Typhoon Goni, which made landfall in the Philippines as a powerful category-5 storm. The initial estimates of 195-mph winds during its landfall would be the strongest on record.

The North Indian Ocean tropical cyclone activity was stronger than normal with two particularly noteworthy storms. Super Cyclonic Storm Amphan was a rare category-5 strength storm for the North Indian Ocean. It weakened to a category 2 before landfall over low-lying eastern India. Its destruction extended into Bangladesh and its likely the costliest North Indian Ocean storm on record. The other noteworthy storm was Very Severe Cyclonic Storm Gati, which was the first hurricane-strength storm on record to make landfall in Somalia. 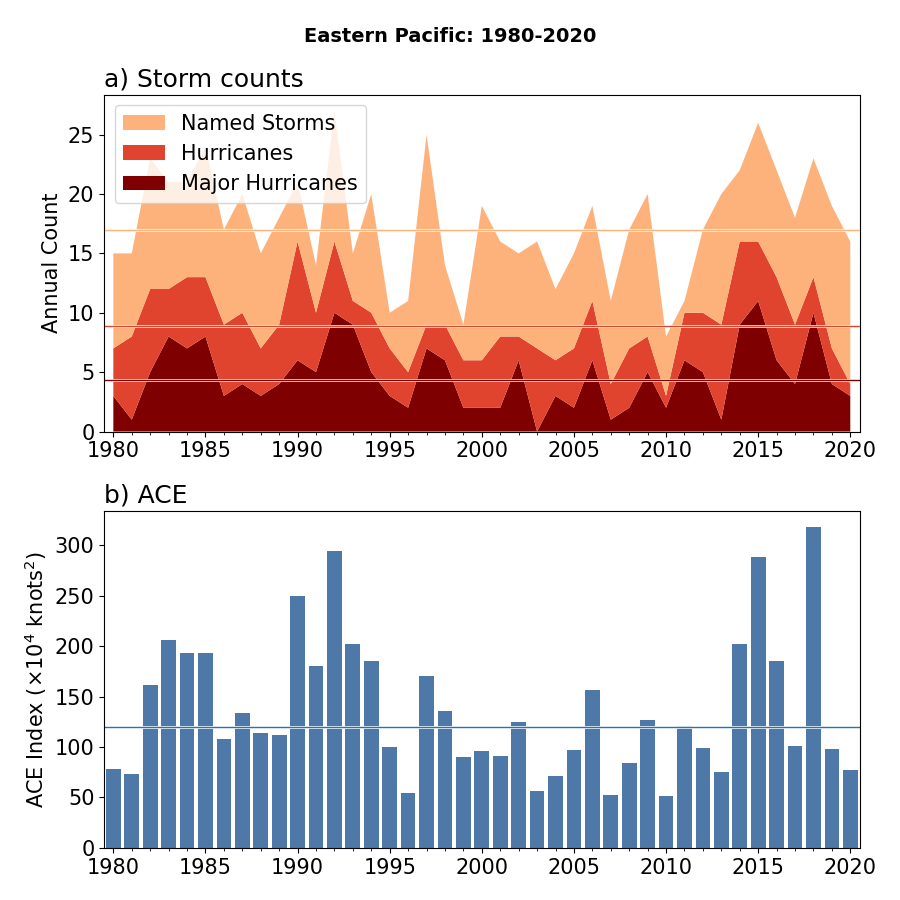 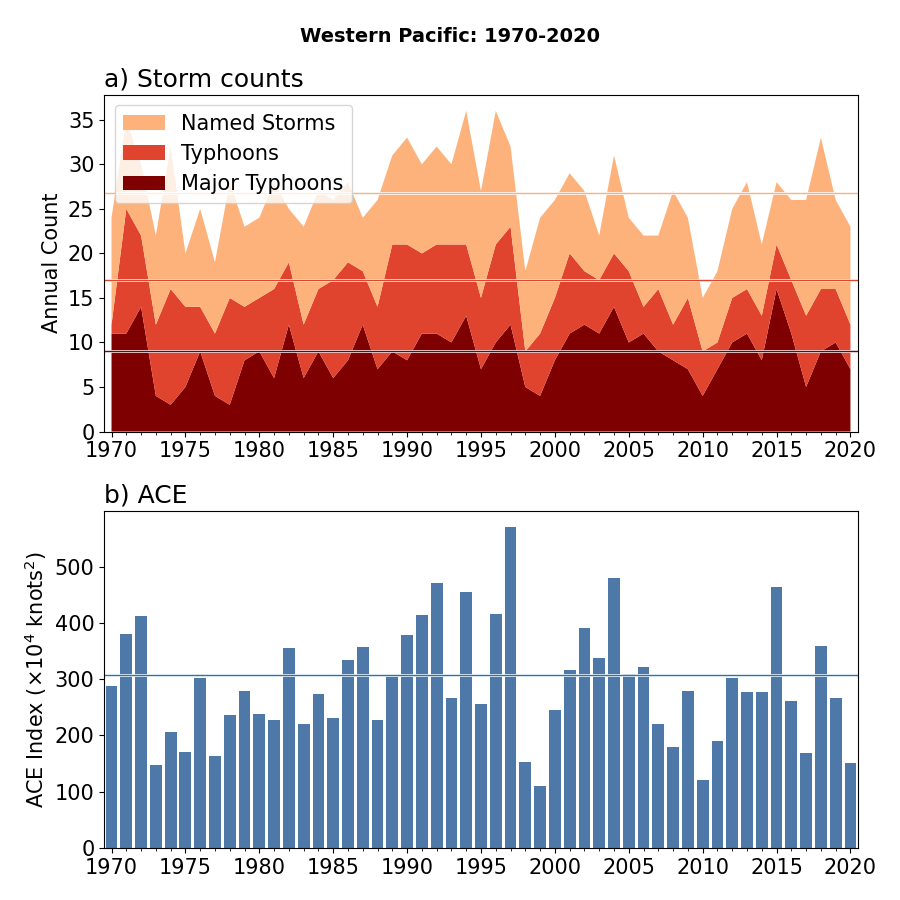 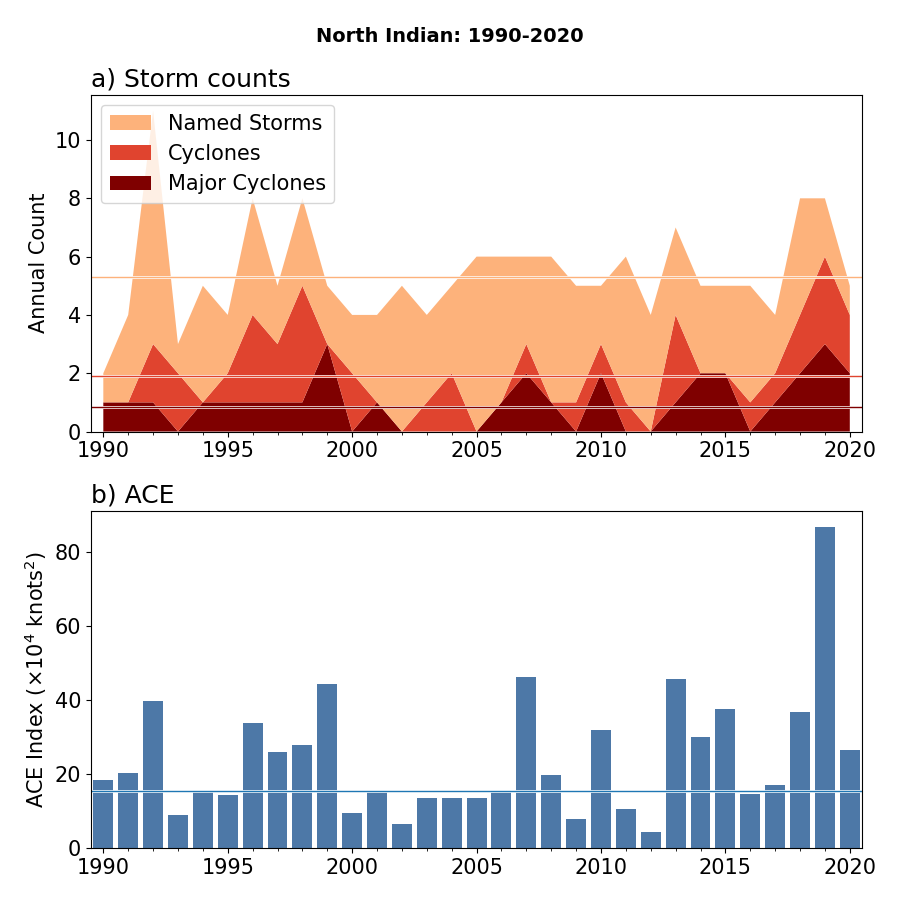 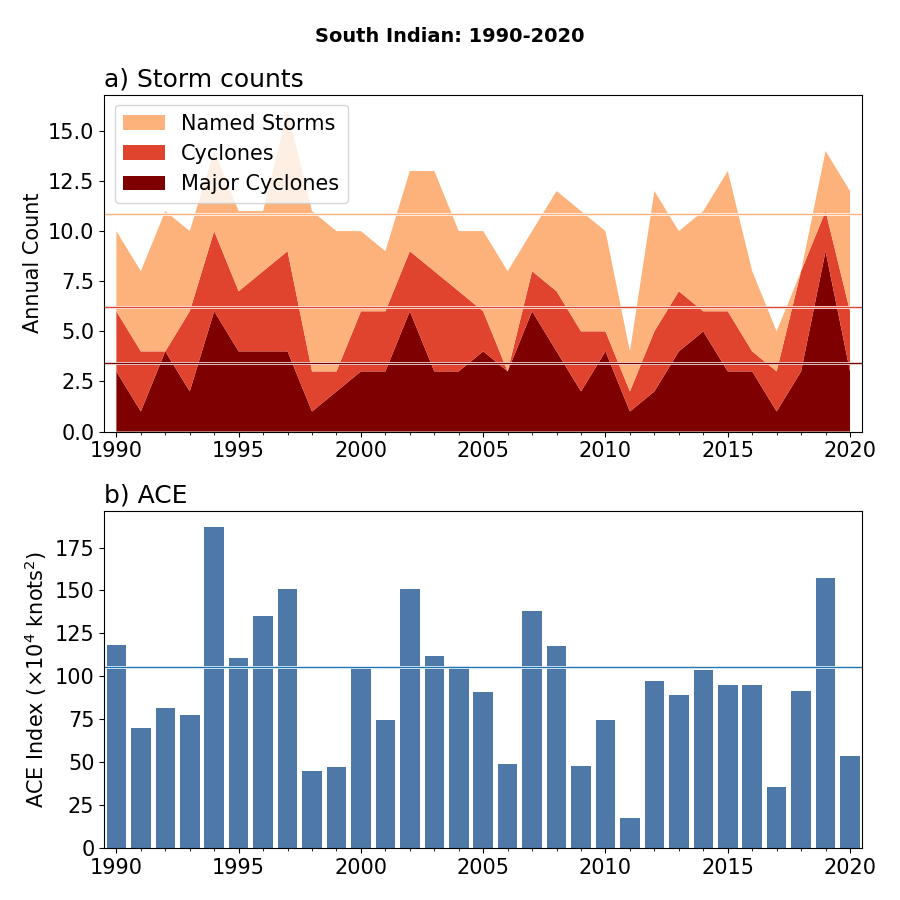 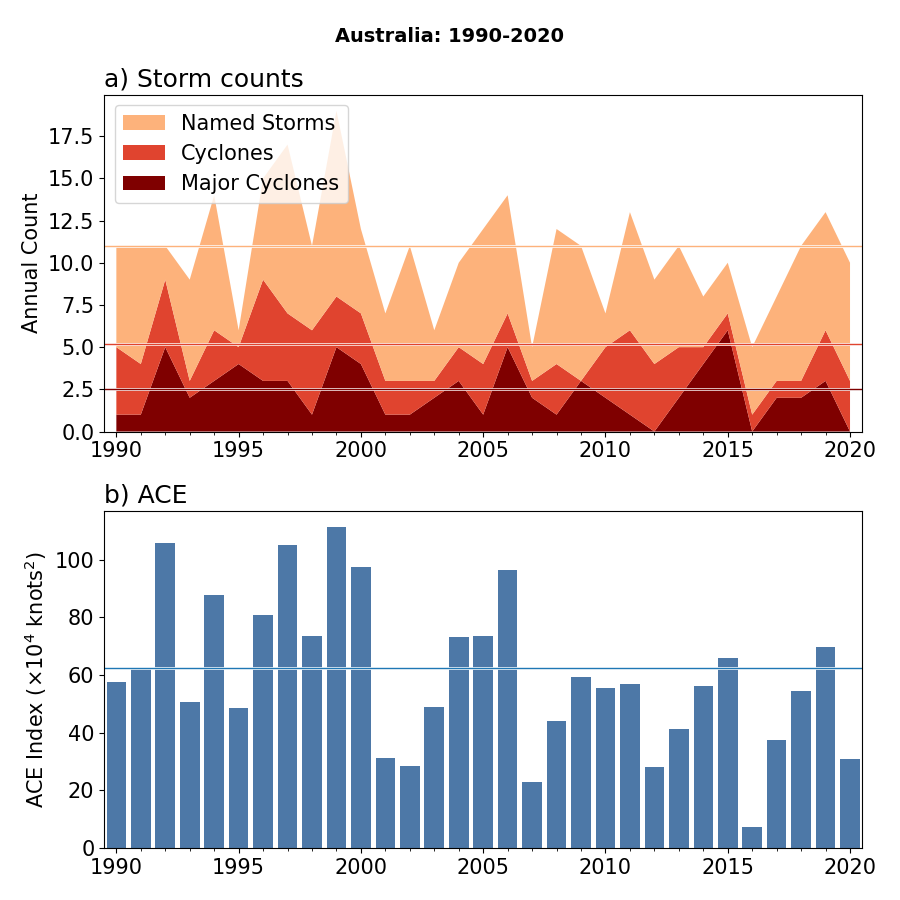 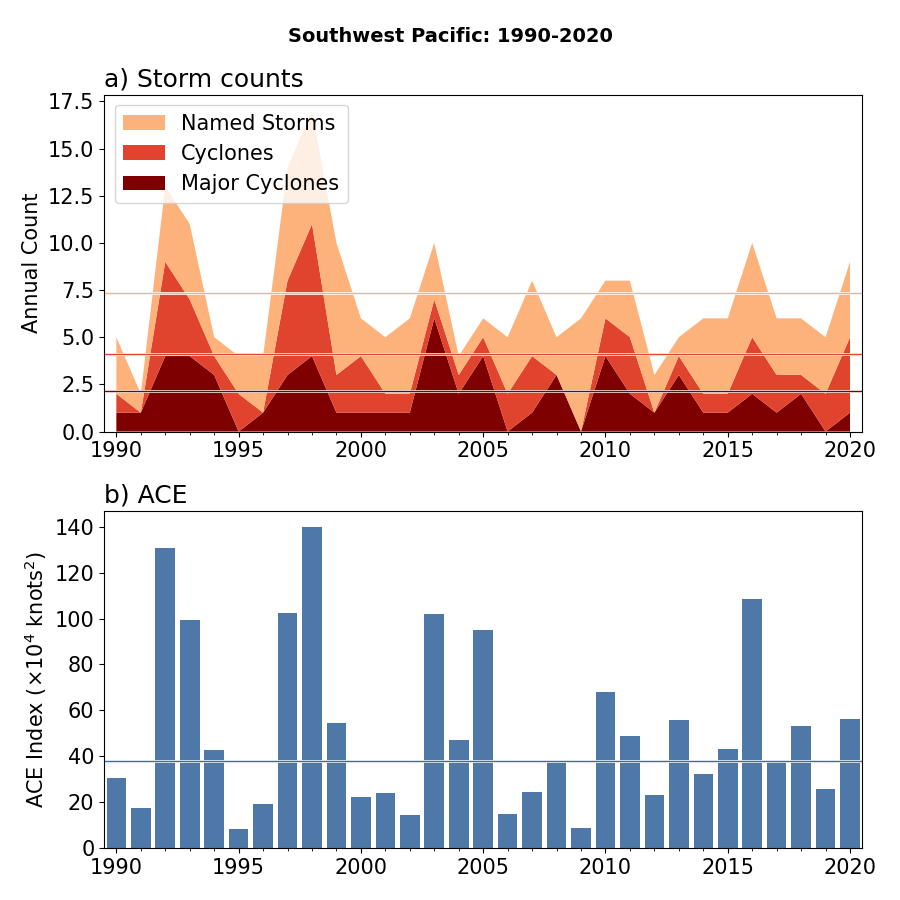 Annual statistics for the Globe. Horizontal lines represent the 1981-2010 climatology.